Get the daily forecast and severe weather alerts in your inbox!

Humans have raised CO₂ levels in the atmosphere to 50% above what they were before the industrial revolution. As a result, the world has already warmed by 1.1°C over the past century and reports indicate that it could reach 2.7°C of warming by the end of this century.

Scientists can measure changes in fire weather (temperature, humidity, rainfall and wind) to rate the level of danger of a wildfire striking. In a new global analysis, we found that, in many regions of the world, the pace at which fire weather conditions are increasing is accelerating faster than climate models predicted.

We used weather observations and climate models to assess historical and future trends in fire weather to find out how conditions are changing in specific countries and regions. We also analyzed data from other recent studies to assess how likely it is that future changes in fire weather will lead to more wildfires, based on relationships between fire and the climate, human use of the land and changes in plant growth.

We found that the length of the fire weather season (when most fires tend to occur) has already expanded significantly in many regions since the 1980s. On average, this season has lengthened by 27% globally, but the increases have been particularly pronounced in the Amazon, the Mediterranean and the western forests of North America. 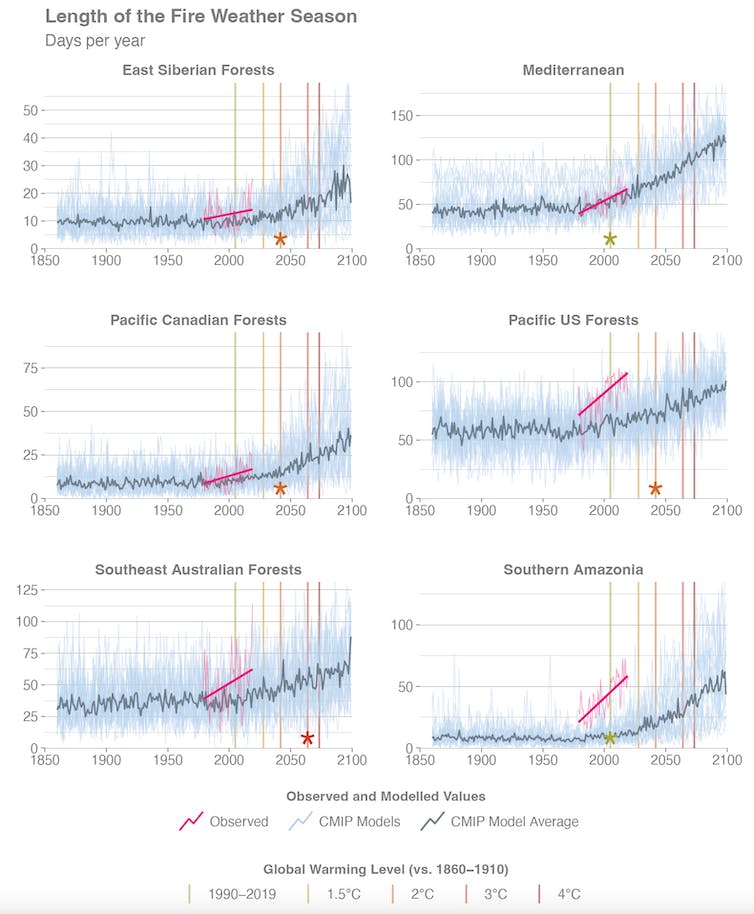 Fire seasons are expanding. Asterisks signal the level of global warming at which extreme fire weather is unprecedented compared with the pre-industrial climate. CMIP refers to the group of climate models used.

The number of days with extreme fire weather — when temperatures are particularly high, recent rainfall and humidity is particularly low and winds are capable of fanning a blaze — have become 54% more frequent at the global level. Because of this, larger and more severe fires that are difficult to contain are now more likely than they were in the past. This is one of the reasons that some of the recent fires in the western US or Australia have been so extensive and damaging. More extreme fires burn more vegetation, exacting a heavier toll on ecosystems and emitting more CO₂ to the atmosphere. 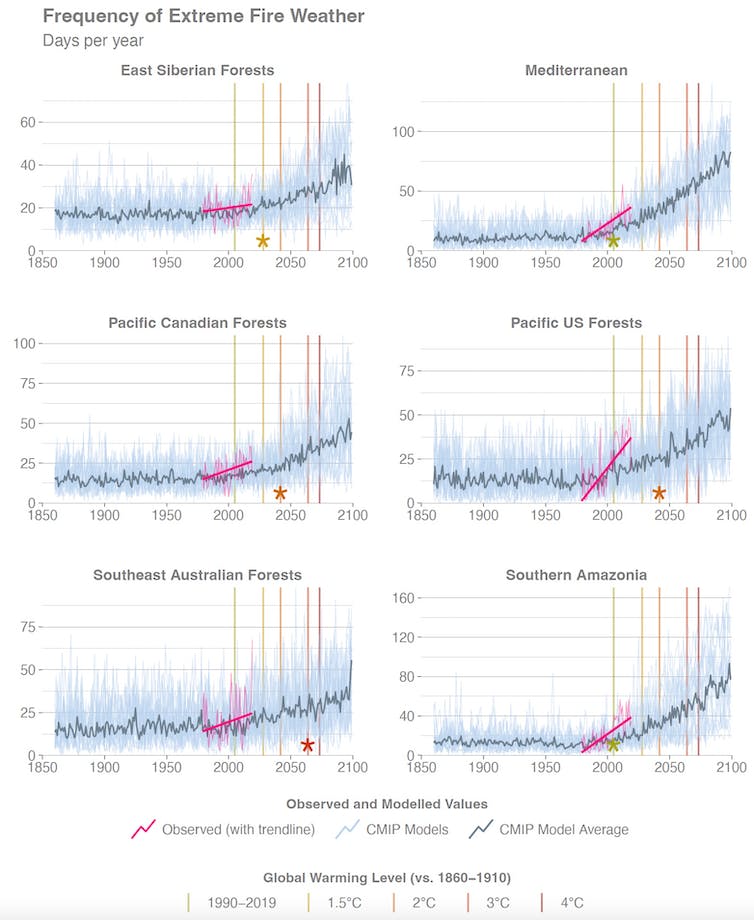 We also predicted that climate change’s influence on fire weather will escalate in the future, with each additional degree of global warming substantially enhancing the risk of wildfires by preparing the landscape to burn.

If global temperatures reach upwards of 2°C above the pre-industrial average, fire weather conditions will be virtually unrecognizable compared with those in the recent history of most world regions. 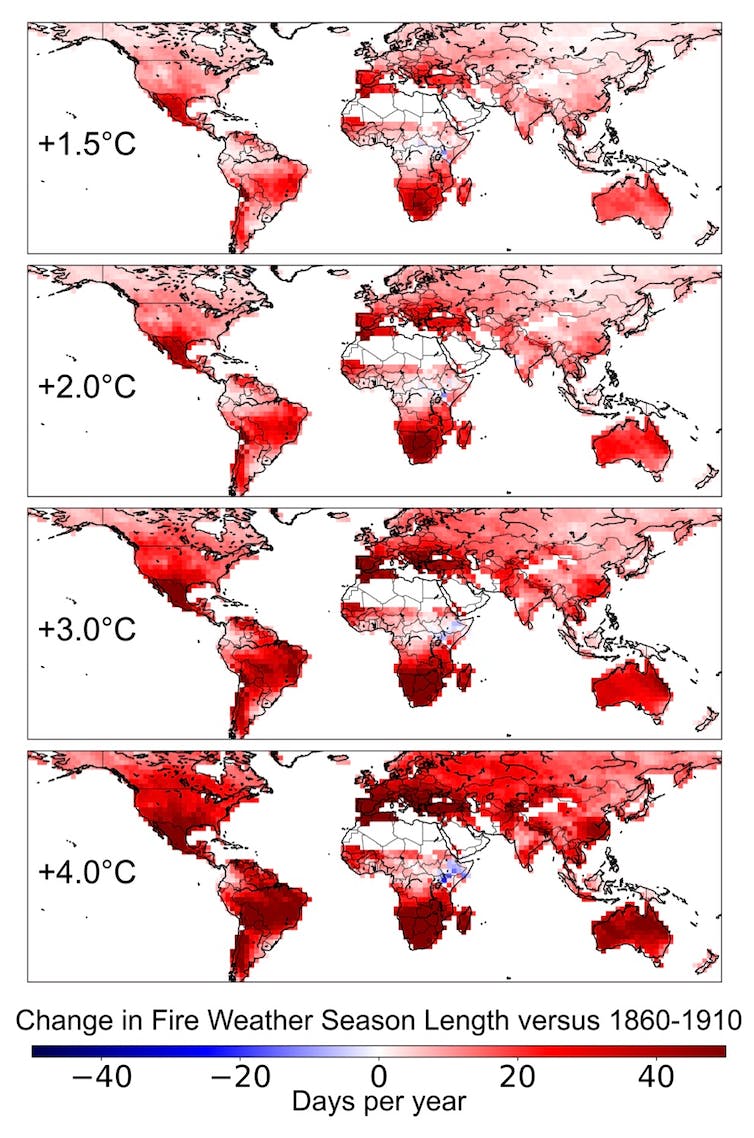 Climate change and its effect on fire weather, however, is not the only factor driving changes in wildfire activity. Human actions strongly affect the odds of risky weather conditions spawning a wildfire, either pushing with or pulling against the effect of climate change.

Fires caused by people are especially relevant outside of the vast northern forests of Eurasia and North America, where there are few dense population centers and many fires are set by lightning. Closer to towns and cities, sparks from faulty power lines or agricultural machinery, arson, or the use of fire to burn farming or logging residue, for example, increase the risk of wildfire.

But people have also inadvertently made large conflagrations less likely by making it harder for wildfires to spread through naturally fire-prone landscapes. This includes, for example, converting forest to farmland, or breaking up the highly flammable grassland vegetation of savannahs in Africa, Brazil and northern Australia.

The common approach of fighting fires in naturally fire-prone landscapes — applied in many regions of the US, Australia and Mediterranean Europe — can suppress blazes for a time, but these forests end up accumulating excessive vegetation fuel, which has contributed to more severe wildfires, especially during droughts. 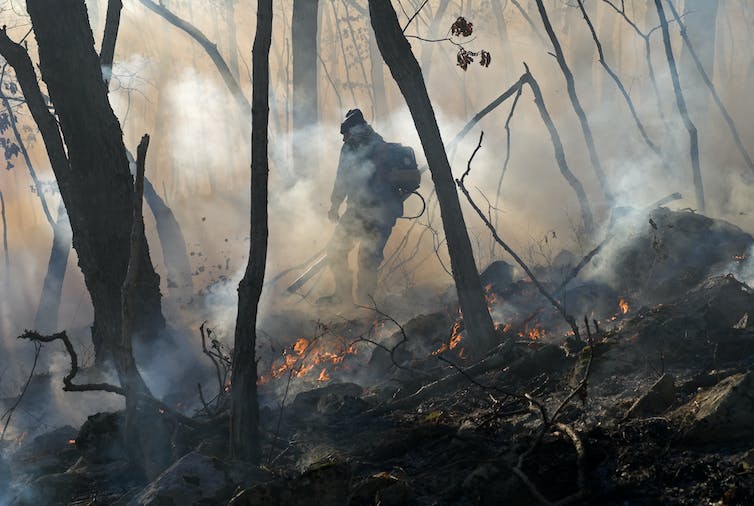 Some ecosystems co-evolved with fire. Suppressing it can do more harm than good in the long run.

Although weather conditions conducive to wildfires are on an upward trajectory in nearly every part of the world, human actions still mediate or override the climatic influence in many regions. This may seem encouraging, but the effectiveness of human efforts to dampen the role of climate change diminishes with every additional decimal of a degree of warming.

Predicting how climate change and human activity will affect future wildfire risk worldwide is difficult, but one aspect is very clear. Slowing and reversing the accumulation of CO₂ and other greenhouse gases in the Earth’s atmosphere will slow the acceleration of wildfire risk. Weather conditions promoting fire have already increased faster than anticipated in many wildfire-prone regions, and committing to further warming through emissions will undoubtedly raise them further.

Failing to keep global warming under 2°C, the minimal goal of the Paris Agreement, carries a dangerous price: unprecedented wildfire risks on the world stage. What we do next matters.

This article is republished from The Conversation under a Creative Commons license. Read the original article.

How wildfires have worsened in recent years

How wildfires have worsened in recent years

The number of wildfires is decreasing, but more acres are burning

Wildfire seasons are getting longer

Wildfire suppression costs have risen by billions of dollars

Lightning fires are causing more damage in the West

Get the daily forecast and severe weather alerts in your inbox!

This evening in Bryan: Partly cloudy skies early then becoming cloudy with periods of light rain later at night. Thunder possible. Low around …

Defining the 'sun dog' and how they appear in the sky, even at night

Sun dogs are best seen when the sun is at or near the horizon. Here's what they are and how they appear.

For the drive home in Bryan: Partly cloudy skies during the evening will give way to cloudy skies overnight. Low 38F. Winds NW at 10 to 20 mph…

Bryan people should be prepared for temperatures just above freezing. It looks to reach a bitter 36 degrees. We'll see a low temperature of 34…

Bryan's evening forecast: Clear skies. Low 39F. Winds N at 10 to 15 mph. Folks in the Bryan area will see highs in the 60s tomorrow. It should…

Bryan folks should see highs in the 50's today. It looks to reach a brisk 53 degrees. A 38-degree low is forecasted. Periods of heavy rain are…

This evening's outlook for Bryan: A few clouds from time to time. Low near 55F. Winds light and variable. Tuesday, it will be a warm day in Br…