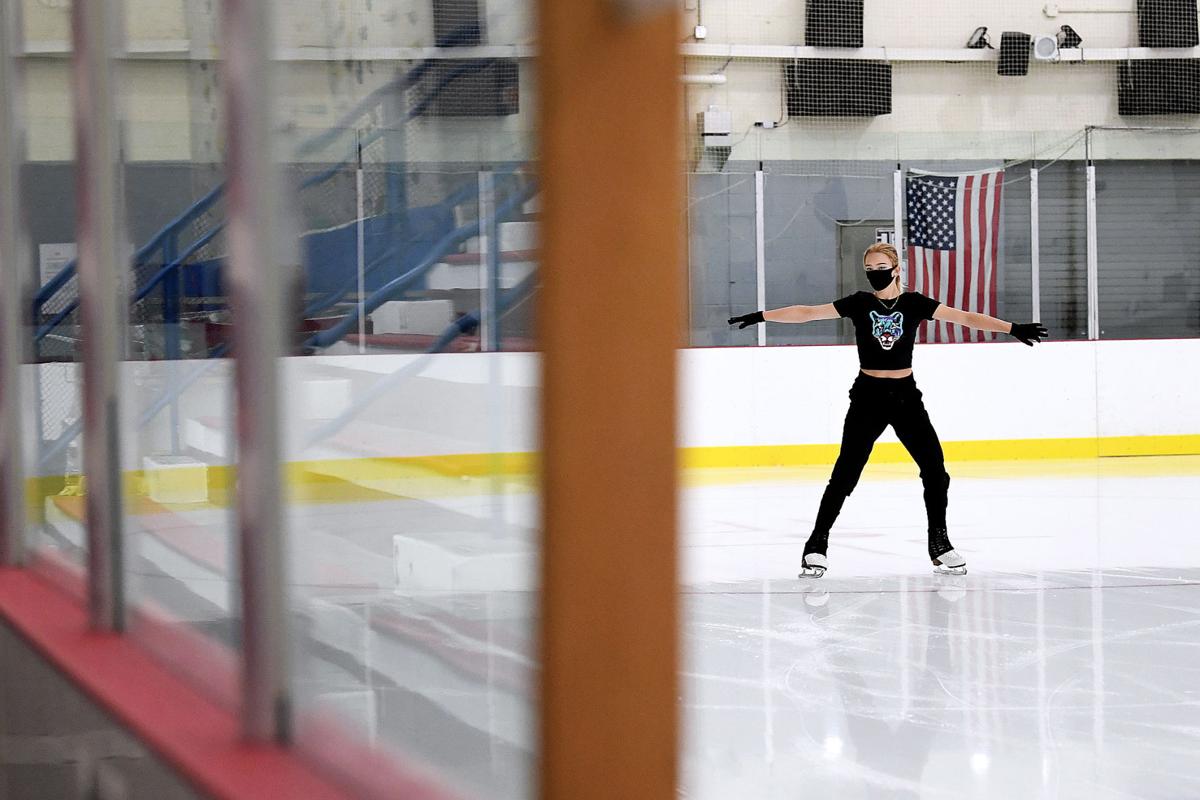 Amber Glenn of Team USA warms-up at the start of a training session Sunday, May 10, 2020, at Spirit Ice Arena in College Station. 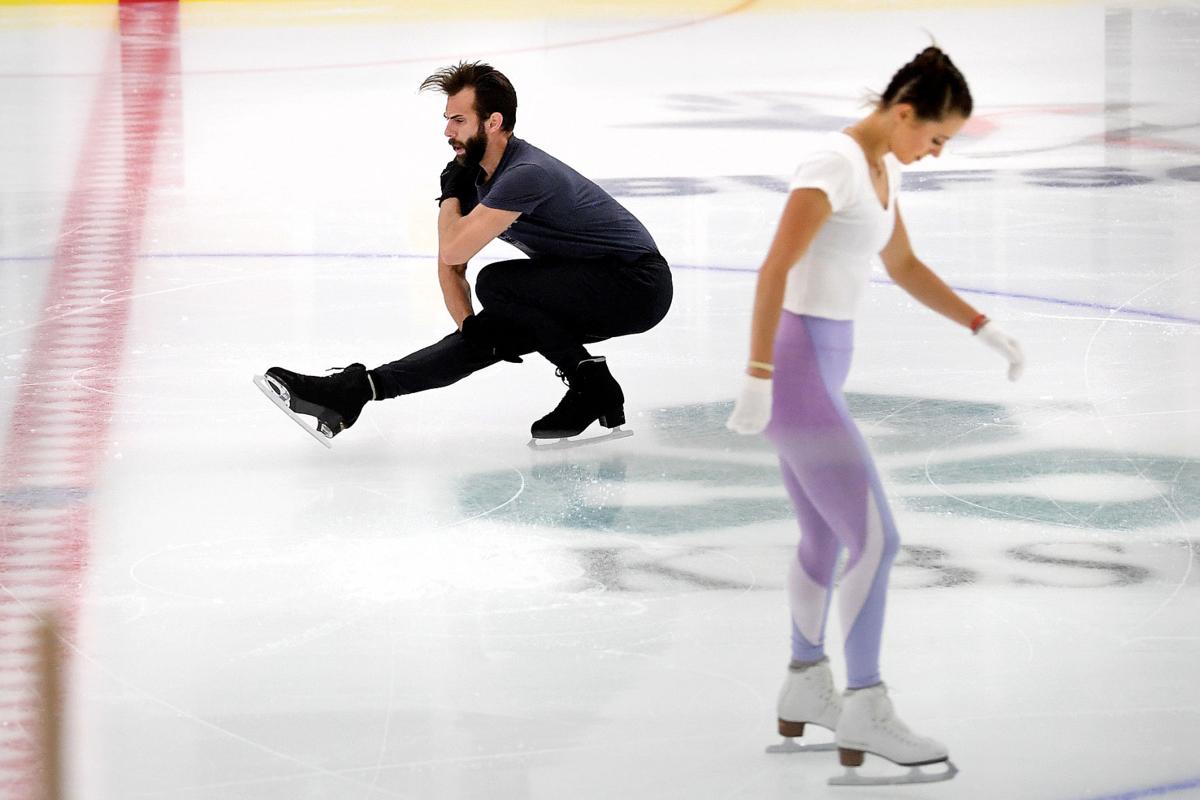 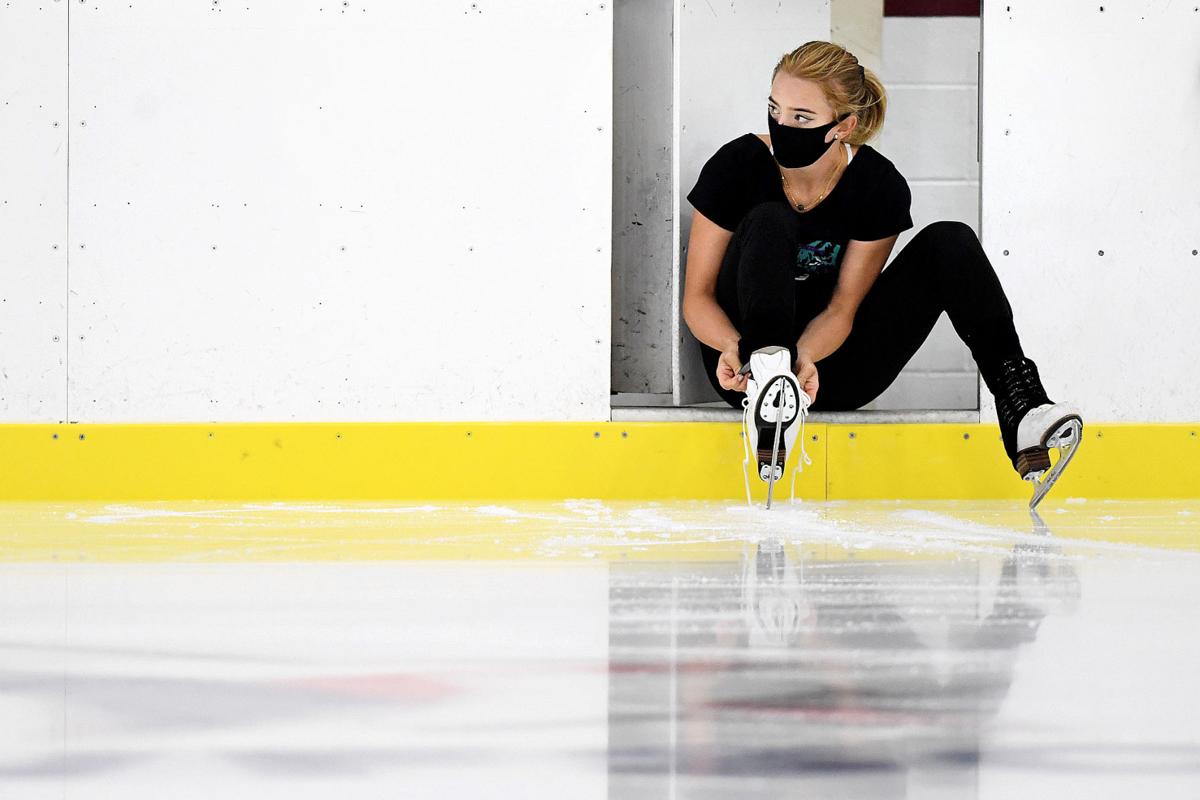 Amber Glenn of Team USA laces up her skates for training Sunday, May 10, 2020, at Spirit Ice Arena in College Station. 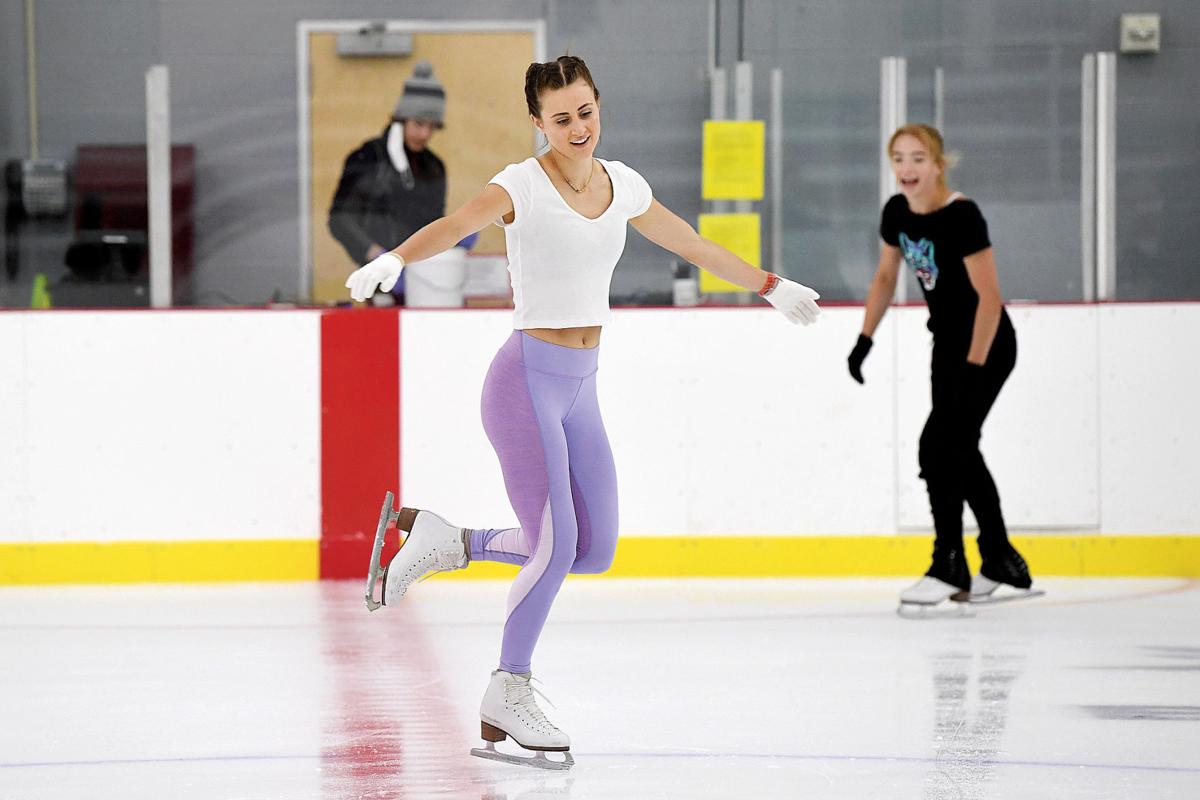 Ashley Cain-Gribble of Team USA trains at Spirit Ice Arena in College Station on Sunday, May 10, 2020.

U.S. figure skating champ Ashley Cain-Gribble was thankful to be back on the ice. The 24-year-old hadn’t been away from an ice rink for more than a couple weeks since first lacing on skates until COVID-19, making Sunday’s two-hour session at Spirit Ice Arena special.

“The biggest thing was knowing where we were when we were rotating and when to come out on the rotation,” Cain-Gribble said. “But overall it just felt so good to be able to glide across the ice and push super fast because you can’t really mimic that on the floor like I was when rollerblading, but it’s not exactly the same.”

Cain-Gribble and partner Timothy LeDuc along with Amber Glenn hadn’t been on the ice since mid-March because of the coronavirus, so the Team USA skaters who are based in Dallas jumped at the chance to get back on the ice when Spirit Ice Arena re-opened, even if it meant the car ride was longer than the practice session.

“It was very interesting to see what the conditioning was like and how they felt,” said coach Peter Cain. “They felt pretty strong although they hadn’t been in skates for a number of weeks they had been rollerblading quite a bit, so that was a little bit different. They felt like their weight was shifted back a little bit when they put the skates on, so that was a little bit different for the first 30 minutes. But today was essentially just getting back out there and trying a few things. We didn’t do any of the big things that they normally do; we didn’t lift and we didn’t do any of the big throws, or the twists and all that kind of stuff. It was just getting back on and feeling their edges trying to get their balance back.”

Cain and wife Darlene Cain coach approximately 25 skaters, including daughter Ashley at Children’s Health StarCenters in Euless. They’ve attracted skaters from all over the country since moving to North Texas almost three years ago, including some from Bryan-College Station which led the Cains to finding a facility for a much-needed workout.

Their skaters were in New Jersey training for the World Championships in Montreal when they were canceled.

“It definitely kind of took the air out of our wings,” Cain-Gribble said. “It was really difficult, because we were training really hard and in just a few minutes it was taken away from us. We literally found out about it on Twitter. But we also knew it was for the best. It couldn’t have gone on, so we understood that, but at the same time, as an athlete you work so hard for that moment and then it was gone. We know we’re going to have those moments again, so we’re keeping that in mind.”

The next big event will be the World Champs Camp in August. It’s an invitation-only camp to prepare athletes for the Grand Prix Series.

All three skaters working out Sunday could make the U.S. Olympic Team, Peter Cain said. Cain-Gribble and LeDuc won the 2019 U.S. Figure Skating Championships. Glenn is ranked fifth in the country in singles.

“They had trained to their peak athletic performance,” Darlene Cain said. “And then they said you‘re not going, whether it was the Summer Olympics or Worlds and all of a sudden the next day it was all shut down. You’re in top shape, then nothing. At first, I don’t think it hit right away and maybe next week it did.”

Skaters typically spend two and a half hours daily on the ice and three more hours off the ice training at the gym or doing lifts. Ironically, Sunday is typically an off day, but they were glad to be working Sunday.

“I think sometimes you can burn out and not appreciate that we get to do this because we have this opportunity,” Cain-Gribble said. “And what I’ve noticed in this time, I get the opportunity to get out there in front of a crowd, I get the opportunity to test my body every day and conquer my fears. That is something I chose as a young girl to pursue so it’s really touched me during this time that I get to go out there and do it again. And that it will be so special to put these performances together. We’ve actually started putting our programs together on the floor. We’ve never done that before, so now, we’re starting to put them on the ice. It’s a little bit of a difference, but just being able to have started having a story on the floor and bringing it to the ice is really special.”

The skaters missed practicing so much they were giddy packing for College Station.

“It was kind of exciting, because last night they got all their stuff ready for the first time in a long time and had their skates all ready and we got to get out our winter jackets,” Darlene Cain said.

The Cains are hoping their facility in Euless will open soon, allowing them to chase their dreams.

“Ashley and Tim were on the World Team for the past two years, even though we didn’t get to compete this year,” Peter Cain said. “Last year, they went to Japan and competed there. They’re currently on the team that won the world team trophy, so they were gold medalists in that. They’ve had a pretty good career. Right now, we’re just trying to maintain for the next year and a half to two years going into the Olympics and hopefully be on the Olympic team.”

The Texas A&M football team needed Jhamon Ausbon, but the wide receiver needed the Aggies just as much, if not more.

Cameron heats up in second half, puts away Franklin 37-8

As Texas A&M running back Ainias Smith stood at the podium for his first press conference in Aggieland, he couldn’t help but wrap his arm …

Amber Glenn of Team USA warms-up at the start of a training session Sunday, May 10, 2020, at Spirit Ice Arena in College Station.

Amber Glenn of Team USA laces up her skates for training Sunday, May 10, 2020, at Spirit Ice Arena in College Station.

Ashley Cain-Gribble of Team USA trains at Spirit Ice Arena in College Station on Sunday, May 10, 2020.