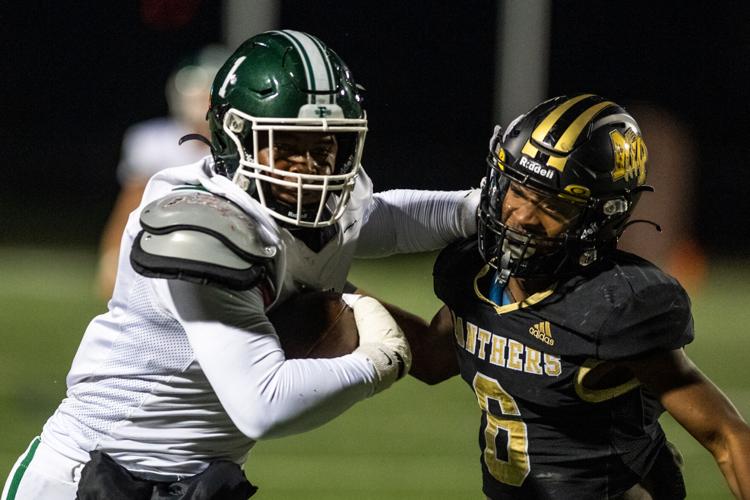 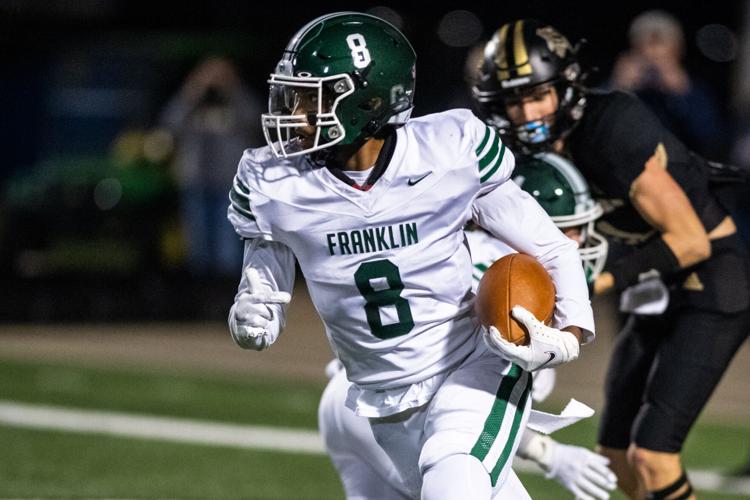 Franklin cornerback Devyn Hidrogo (8) returns an interception in the end zone against Anahuac on Thursday night. 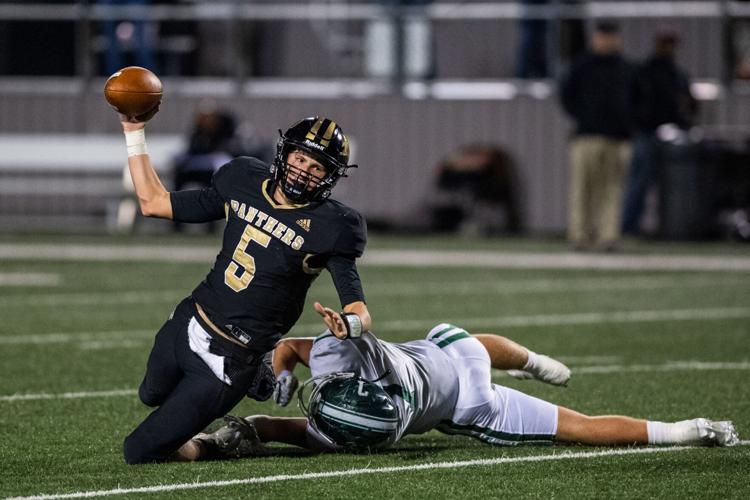 They trailed 7-6 at halftime to Anahuac, a position the Lions have been in only once this season. The message from Franklin head coach Mark Fannin was simple.

The message was heard loud and clear as the Lions overcame the halftime deficit for a 32-7 victory over Anahuac at Waller ISD Stadium in the area round of the Class 3A Division I football playoffs.

The Lions went to work from the opening drive of the second half, going on a nearly 6-minute drive powered by their signature rushing attack. Jayden Jackson capped the drive with a 1-yard TD run with 6:49 left in the third quarter, and now up 12-7, the Lions (12-0) never trailed again.

In fact, Franklin took control with 26 unanswered points in the second half as Bryson Washington and Collin Smitherman also found the end zone.

The Lions ran the ball 46 times for 288 yards and five scores overall. Most of that came in the second half as the Lions only had the ball for two offensive possessions in the first half. One of those possessions was a score and the other ended with a turnover on downs.

“The style of football we play wears on defenses,” Fannin said. “... And you could tell in the second half they were kind of wearing down a little bit, and we just keep pounding it and pounding it, and it worked out in our favor.”

Franklin’s defense also found another level in the second half, holding Anahuac (9-3) to just two first downs after halftime. Anahuac had two three-and-outs and two failed fourth-down tries in the second half.

“Defense is playing really well right now,” Fannin said. “They’re starting to gel at the right time. Over the last four or five weeks, they’ve just been coming together and coming to practice and buying in and trusting each other. I’m very glad of their how they’re playing right now.”

Devyn Hidrogo had two interceptions to help lead Franklin’s defense. His first interception came at a critical time as Anahuac was driving at the Franklin 20-yard line with nine seconds left in the first half.

“Devyn had a great game,” Fannin said. “He’s a playmaker. He’s been a playmaker all year. I think he had two interceptions tonight. That was big when he made those plays.”

With the win, Franklin advances to the regional round of the playoffs to face the winner of Hitchcock vs. Woodville at a date, location and time to be determined. Hitchcock (10-1) and Woodville (9-2) play at 7 p.m. Friday in Anahuac.

WACO — After two of his bruising, hard-running touchdowns, Tony Hamilton took a bow. The celebrations were his way of celebrating the College …

Three Brazos Valley football teams remain in the playoffs. College Station and Franklin have tough region final matchups. And it's time to sta…

Class 6A Division I

Jaxon Edwards had a big smile on his face last Friday night.

While the Burton football team has made noise across the state this season for its offense, it was the Panthers’ defense that proved to be the…

There is no Smithson Valley, Texas.

Run It Back: SMU

Franklin cornerback Devyn Hidrogo (8) returns an interception in the end zone against Anahuac on Thursday night.