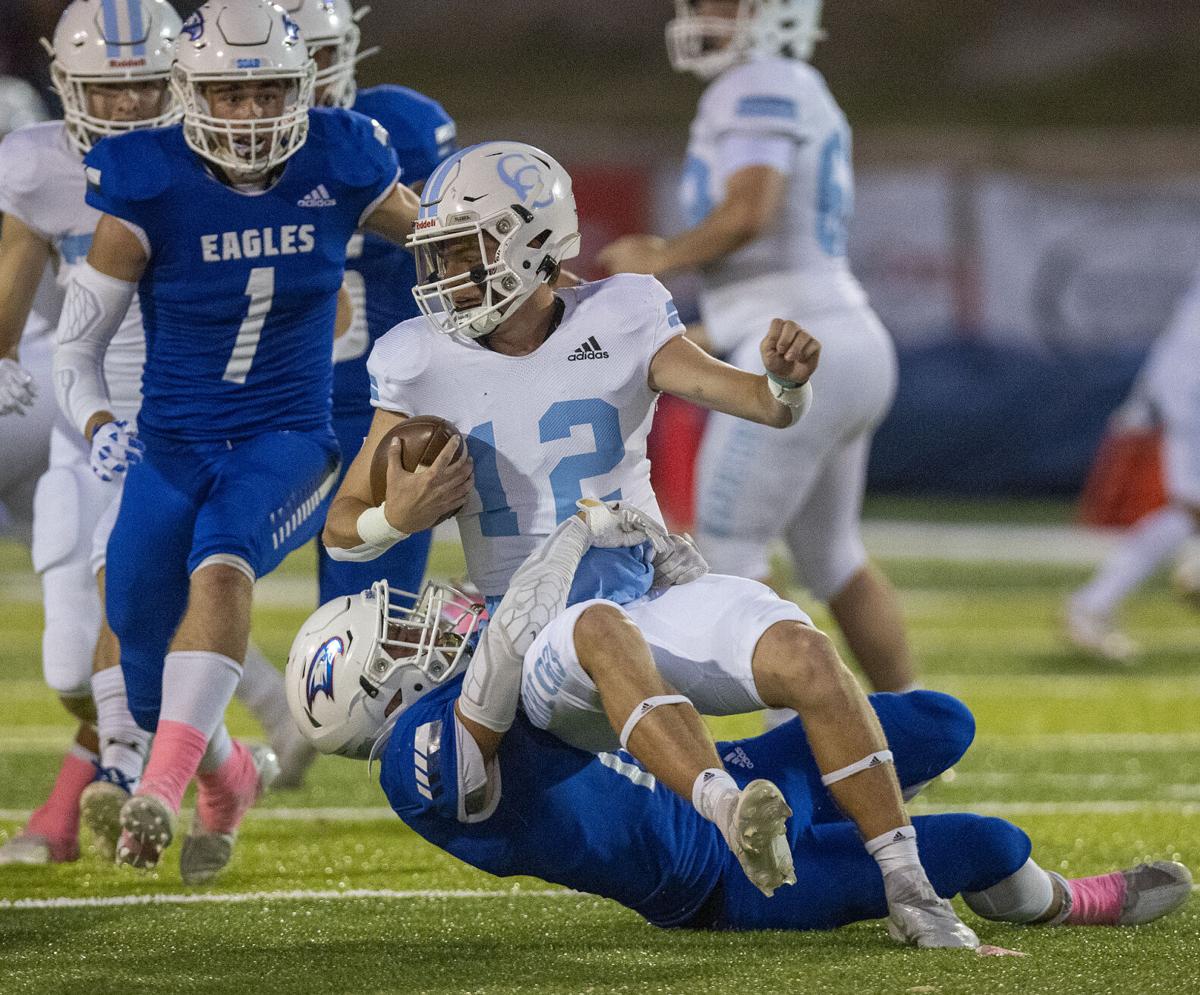 JORDAN EPP Special to The Eagle

A wild fourth quarter saw Cypress Christian and Brazos Christian combine for 400 total yards and 42 total points, but senior running back Cody Andrus’ three touchdowns in the final quarter secured the 41-36 victory for the visiting Warriors on Friday at Eagle Stadium.

Brazos Christian (5-2, 1-1) trailed 21-14 at the end of the third quarter in the TAPPS Division III District 4 matchup, but the Eagles threw for 208 yards and three touchdowns in the fourth quarter as they tried to chase down the Warriors (6-2, 3-).

The Eagles’ senior quarterback Levi Hancock threw for a season-high 409 yards and five touchdowns, completing 18 of 38 passes. Hancock also had one catch for 11 yards on a fake punt thrown by senior Harris Powers, and he ran seven times for 9 yards.

Brazos Christian senior wideout Hayden Tillery didn’t snag a reception until the fourth quarter but finished with four catches for 155 yards and three touchdowns. His final two scores came in the last three minutes of the game, including a 13-yard TD catch with three seconds remaining that ended the scoring. The Eagles attempted an onside kick in a last-ditch effort to win, but Cypress Christian recovered and knelt out the clock.

Cypress Christian ran for 384 yards, including 182 in the fourth quarter. Andrus and junior quarterback Maxwell Landrum combined for six scores on the ground in the TAPPS Division III District 4 matchup.

Andrus had 189 rushing yards on 20 attempts, four going for touchdowns. In just the fourth quarter, he had nine rushes for 128 yards and three touchdowns, staving off a comeback attempt by Brazos Christian (5-2, 1-1).

Landrum struggled in the air, completing just 4 of 14 pass attempts for 88 yards, but he had no issues running the ball with 24 carries for 191 yards and two rushing touchdowns.

Senior running back and middle linebacker Grayson Beckman performed on both sides of the ball for Cypress Christian. Beckman had a 43-yard catch late in the second quarter that set up an Andrus touchdown to put the Warriors up 14-7. Beckman also had three sacks on defense, one solo and twice assisted by senior defensive end Jacob Swan.

Jackson Owen, a senior safety for the Warriors, also had a fumble recovery on the first drive of the game — the only turnover by either defense in the game.