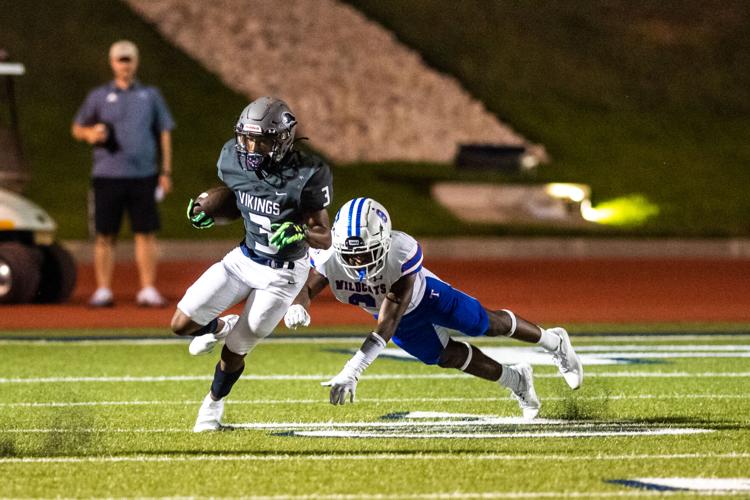 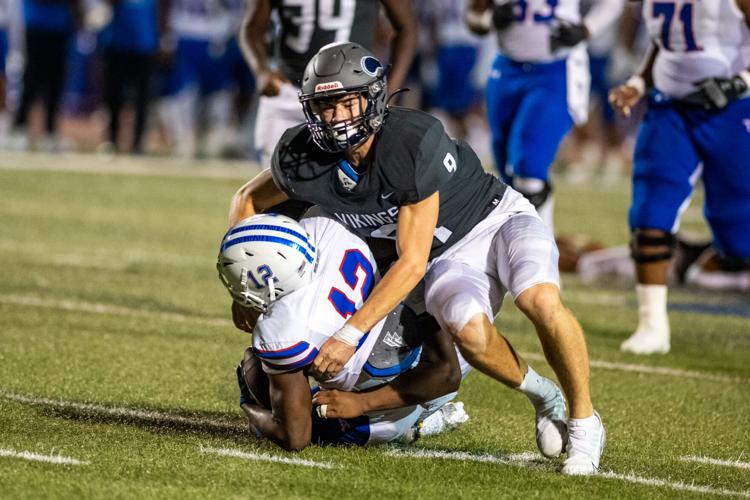 The Temple Wildcats thrived on big plays in rolling to a 53-19 victory over the Bryan Vikings, who were missing their big-play quarterback for the District 12-6A opener Friday night at Merrill Green Stadium.

Minus senior Malcom Gooden who had thumb surgery Tuesday, Bryan battled hard to trail 21-6 at halftime, managing enough offense to grind out a 62-yard touchdown drive. But the Wildcats (3-2) opened the second half with a trio of three-play touchdown drives to build a 43-6 lead in less than six minutes.

Temple’s Lezlie Jackson returned a short kickoff to the Bryan 48-yard line, setting up a 34-yard touchdown reception by Christian Tutson. An interception gave the Wildcats a short field, allowing Mikal Harrison-Pilot to skirt around the right end for a 17-yard touchdown run. Bryan ran three plays and punted, and Temple ran three plays and lined up for an extra point after Steven Jackson’s 37-yard TD run.

“In the third quarter, I just felt like they made a play or two early on and seized a little momentum, and it really put our backs against the wall at that time in terms of time and probably [we] started pressing a little bit,” Bryan coach Ricky Tullos said. “[We] kind of got out of the game plan there, and that’s what a good team will do to you.”

Wide receiver Jeremiah Lennon turned a long pass across the field into a 76-yard touchdown in the first quarter when Bryan missed a tackle. Bryan was in position to score first with a well-designed run-oriented possession that reached Temple’s 22 before an incompletion and a sack led to a 46-yard field-goal try that was blocked.

Temple almost mirrored the Vikings with an 11-play, 49-yard drive, but the Wildcats fumbled with Bryan’s Ta’lon Devault recovering.

Temple’s defense built its lead to 14-0 when linebacker Taurean York blasted Bryan senior quarterback Creed Pierce just as he was throwing. Temple defensive lineman Julian White gathered in the fluttering football and lumbered 5 yards into the end zone for the score.

Bryan answered with a smash-mouth drive with running backs Tate Scheringer and Javalen Wade covering 62 yards in seven plays. Wade bulled his way for the final 13 yards, barreling through a would-be tackler at the 8 and running over another at the 2.

“I thought we ran the ball well,” Tullos said. “And then we broke down a little bit when they pressured us throwing the ball. That’s the newness, the adjustments we have to make offensively as we continue to build our packages.”

Bryan’s defense forced a punt midway through the second quarter, but Temple’s offense came up with a huge touchdown after Bryan went three-and-out.

Temple’s Steven Jackson scored on an 8-yard run with 1:58 left to cap a seven-play, 66-yard drive. The big play was a 41-yard reception by Harrison-Pilot to convert a third down. The 190-pound, three-sport star who has Texas, Texas Tech and Oklahoma among his final possible destinations as a safety, showed speed and elusiveness after making the catch 14 yards down the field.

Temple threatened to add another score late in the first half but couldn’t hit Harrison-Pilot for a 33-yard touchdown pass on the last play. The Wildcats didn’t miss much in the second half.

“Hats off to them,” Tullos said. “I thought in the first half we did a great job of containing them and making them drive other than the big 70-yard pass play. We were right there and did a good job of battling back and forth.”

“Momentum just shifted a little bit,” Tullos said. “This game is just momentum and playing on that emotion, and they made a little adjustment to the run, got a few extra hats in the box to slow it down a little bit.”

Bryan had averaged 41.3 points a game behind Gooden, who has 827 yards passing and 178 yards rushing, accounting for 12 touchdowns.

Bryan was 7-of-15 passing for 27 yards with an interception. The Vikings were able to rush for 260 yards. Freshman Wade had 152 yards on 11 carries, including a highlight reel 75-yard touchdown run. Wade broke free down the right sideline with a couple defenders in pursuit. A defender from across the field had speed and the angle to stop him, but Wade dodged him around the 25 as he crossed the field, eventually hitting the pylon on the other side as he was tackled.

Bryan added its last touchdown on a 26-yard run by junior Isaiah Nutall after another fumble recovery by Devault.

“I was proud of our kids. They kept battling and fighting to the last whistle,” Tullos said.

Gooden, who dislocated the thumb and tore ligaments on his throwing hand, was on the sideline with his hand bandaged.

Temple quarterback Reese Rumfield threw for 266 yards on 16-of-25 passing despite several dropped passes. Harrison-Pilot had 112 yards on five receptions.

WACO — After two of his bruising, hard-running touchdowns, Tony Hamilton took a bow. The celebrations were his way of celebrating the College …

Three Brazos Valley football teams remain in the playoffs. College Station and Franklin have tough region final matchups. And it's time to sta…

Everyone in Madisonville’s buzzing about the Mustangs, who for the first time since 2017 spent Thanksgiving week practicing for a playoff game.

Class 6A Division I

While the Burton football team has made noise across the state this season for its offense, it was the Panthers’ defense that proved to be the…

Jaxon Edwards had a big smile on his face last Friday night.