If fantasy football existed for high school, College Station’s Dawson Schremp would be at the top of every team owners’ list when it came time to draft a kicker.

The senior has been a mainstay for the Cougars as their starting kicker and punter for the past three seasons. For his career, Schremp has made 150 of 155 extra points and 13 of 19 field goals with a long of 47 yards, and he’s averaged 39.9 yards per punt with 10 pinned inside the opponents’ 20-yard line. He’s also a two-time All-Brazos Valley honoree, last year’s District 8-5A Division I specialist of the year and an honorable mention member of the Class 5A’s all-state team as a junior.

When the Cougars need a lift from their special teams, Schremp often gives them just that. And although it can be a nerve-wracking job, he said he tries to have fun even during the pressure-packed moments as he stays focused by remembering his training.

Consistency has been a goal for Schremp, who owns 4.5-star ratings in kicking and punting through the Kohl’s Professional Kicking, Punting, Long Snapping Camps that he attends during the offseason.

“That’s always the goal of any kicker is just to be more consistent, and he has been,” Edwards said. “He’s been dead on with his PATs and field goals. He’s just done a really good job of working on that, staying within himself, not overthinking. That’s a problem you always have with kickers is they get inside their own head.”

The 6-foot, 180-pound Schremp learned the importance of staying calm in the eye of the storm from familiar faces on the Texas A&M football team, including place-kickers Seth Small and Alan Guerrieri, who is a former Cougar and son of A&M soccer coach G Guerrieri.

Schremp played with Alan Guerrieri when he was called up to varsity as a freshman, which he said helped him become more confident once he got the starting job the next year. Schremp and Small, the Aggies’ starting kicker, met at a Kohl’s camp during Schremp’s sophomore year, and the two have kept in tough since. Schremp said the advice he’s gotten from the two Aggies was short and sweet.

“Stay cool. Stay focused, and have fun with it.”

The staying cool part includes Schremp constantly moving and staying active on the sideline. Schremp said his game day routines keep him loose, which is exactly what he wants in the crucial moment of a game.

If he’s punting, Schremp makes sure to swing his leg once before the ball is snapped, and he likes to hold on to the towel tucked into the back of his jersey, all while continuing to move around. He takes a simpler approach before field goals and extra points, but it’s just as special.

“My holder is Jaxson Slanker, and I always give him a fist bump before every kick,” said Schremp, who added that Slanker has been his holder since they were in sixth grade. It was Schremp’s first year playing football after moving from soccer.

Schremp could one day have a new holder as he hopes to fulfill his dream of playing college football. With his experience and consistency, Schremp has the tools to succeed at the next level according to his coach.

“I truly think he’ll definitely wind up somewhere kicking for somebody,” Edwards said. “[He’s] got too good of a leg, and he’s too consistent to not.”

The Cougars opened 8-5A-I play last week with a 38-10 win over Magnolia, and they will continue district at New Caney Porter at 7 p.m. Friday. No doubt Schremp will be called to do his part, something he looks forward to as he plays one last season with teammates who have become his second family.

“If I had people around me that didn’t trust me, I don’t think I’d be as successful,” Schremp said. “... It’s more of a family than it is a team. You know and love your family, so I know and love them. I know if I missed a field goal, they’re going to have my back.” 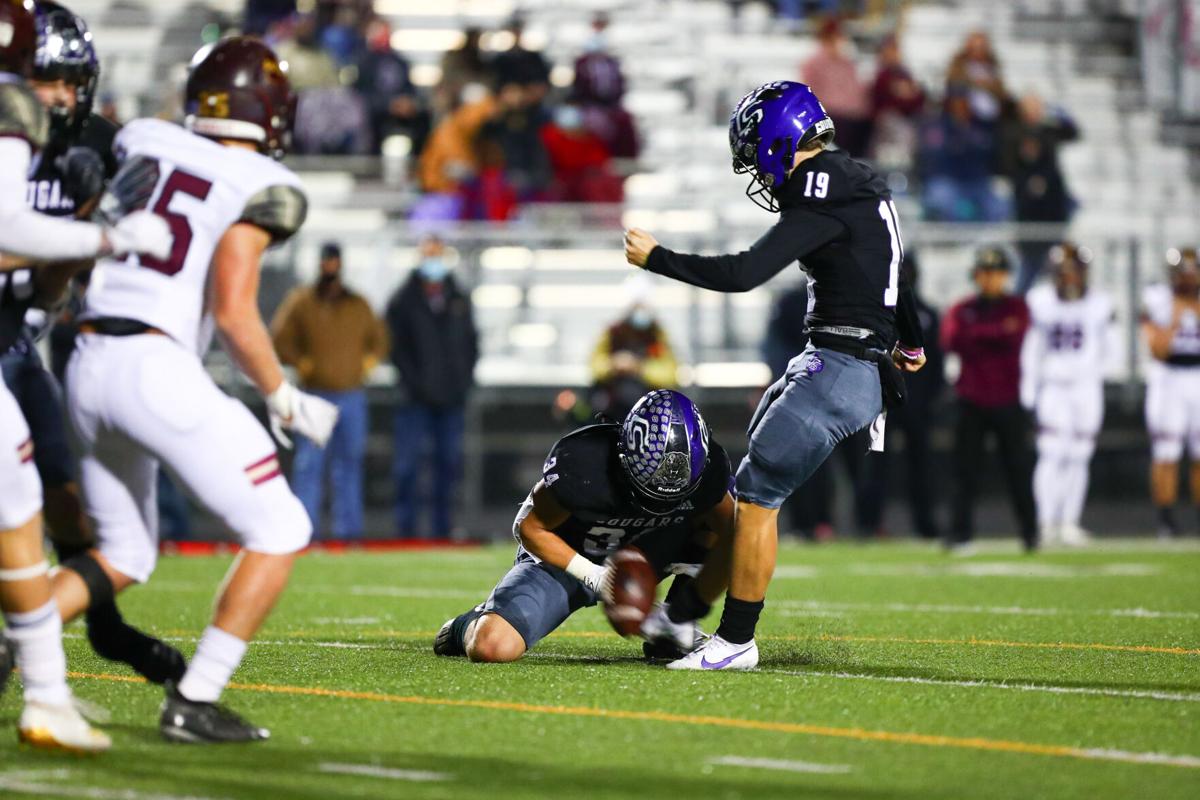 College Station kicker Dawson Schremp (right) and holder Jaxson Slanker have teamed up on field goals and extra points since they were in sixth grade.