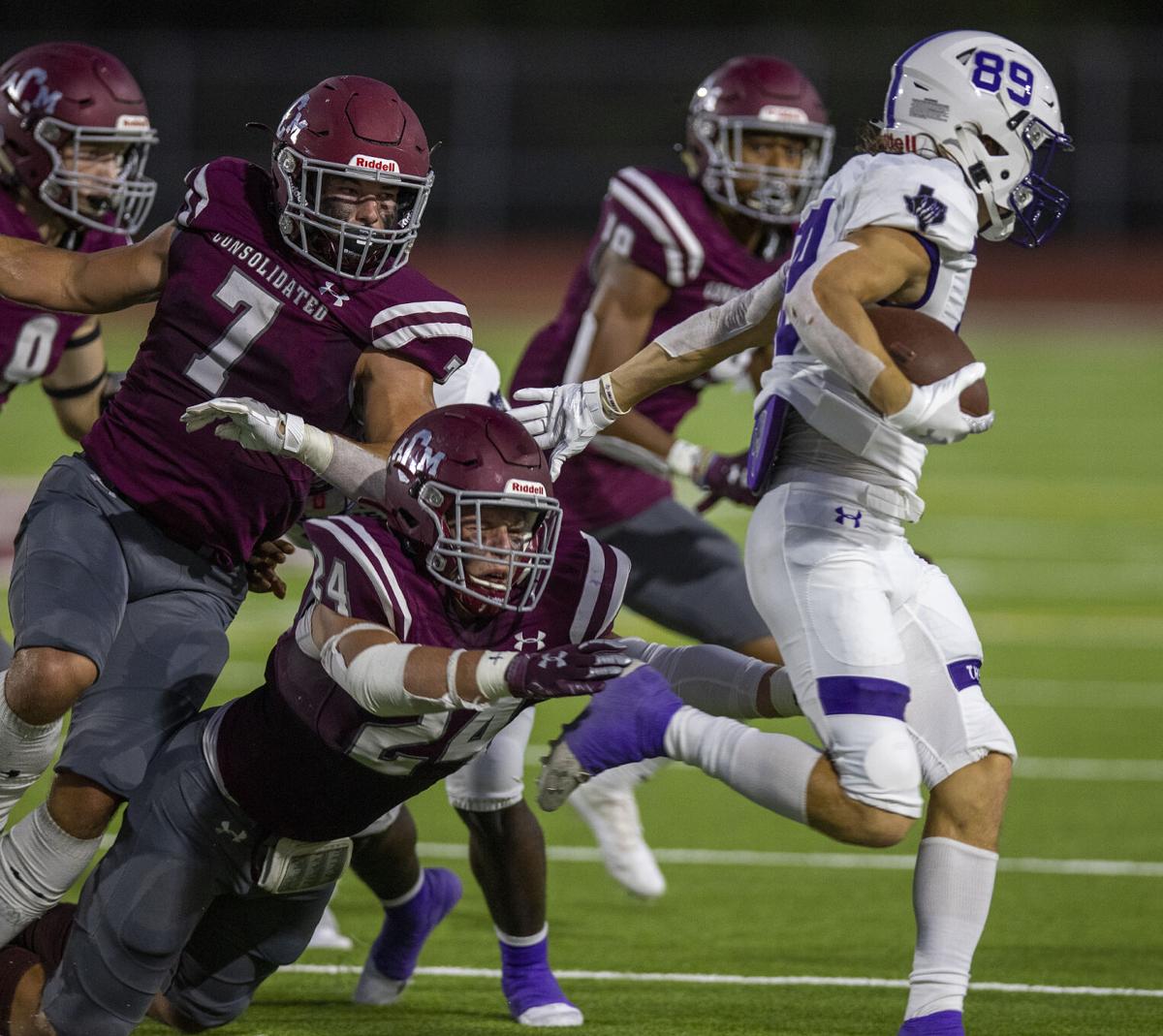 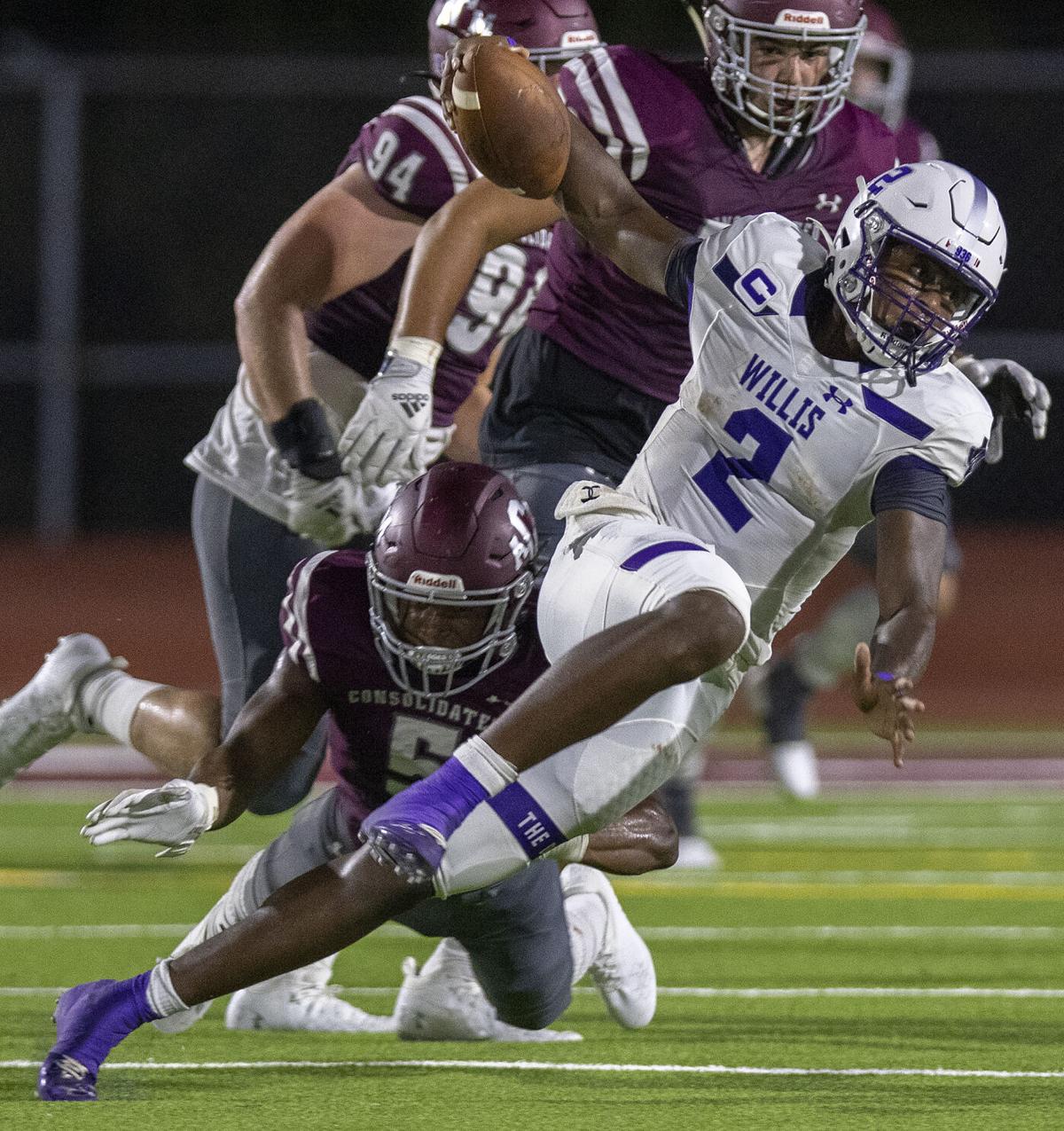 There were many season firsts for the A&M Consolidated football team Friday night, and not the good kind. Among them were the Tigers giving up their first sack, facing their first deficit, and the worst, suffering their first loss.

Too many second-half mistakes added up as Consol dropped its final nondistrict game to Willis 24-17 on Homecoming at Tigerland Stadium.

“We wanted to go undefeated in predistrict, and we didn’t get that done,” Consol coach Lee Fedora said. “We’ve got a tough district coming up, and we’ve got to be prepared. ... We had chances to win the ball game, should’ve won the ball game.”

The Tigers (3-1) appeared to tie the game with 5:05 left in the fourth quarter on a 60-yard touchdown pass from Brodie Daniel to Wesley Greaves, but the score was negated on a chop block penalty against running back Keshun Thomas and a lineman.

“That was tough,” Fedora said. “I’ve got to go back and watch it. What Keshun said is he tripped, and when he fell, he fell into the legs of the guy that caught a chop block. It is what it is. You’ve got to overcome those mistakes and hopefully get back into it.”

Three plays later, Consol elected to punt on fourth-and-3 from its own 45-yard line. Willis (2-2) ran out the final 4:01 of the game, icing the victory with a 13-yard run by quarterback Derek Lagway on third-and-10 to move the chains and allow the Wildkats to take a knee.

“I trusted our defense to try and make a stop, because I didn’t want to give them a good area to where they’ve got a field goal kicker that can kick it from deep,” Fedora said of not going for the fourth-and-3. “Then all of a sudden we would’ve been down two scores, so that was the decision.”

Two Tiger fumbles in the third quarter gave Willis short fields and eventually allowed the Wildkats to tie the game at 10 on a 41-yard field goal with 5:23 left in the period. Later, Consol missed a 34-yard field goal wide right, and Willis scored on an 80-yard run on the ensuing play to take a 17-10 lead with 2:19 left in the quarter.

“You think about it ... we only had one play there, because we fumbled the first play [of the drive], and then we fumbled the punt, and we just gave them opportunity after opportunity,” Fedora said. “Those mistakes we made cost us the game.”

Consol responded with a 2-yard touchdown run by Thomas to tie the game at 17 with 11:08 left in the fourth quarter.

Lagway put the Wildkats up for good on the next drive, however, scoring on a 12-yard touchdown run. He only had 55 yards on 17 rushes but was effective on the ground in crucial moments.

“We knew coming in that he was a great quarterback that could take off and run,” Fedora said. “He had great ability in that, and they made some big plays off that.”

For the first time this season, Consol found itself trailing after Willis took a 7-0 lead with 10:11 left in the second quarter on Da’Ontae Fleeks’ 3-yard touchdown run.

It seemed as if Willis would retake the lead before halftime, nickel and diming down to the Consol 9, but Jaden Thomas sacked Lagway for a loss of 16 that put the Wildcats second-and-goal from the Tiger 28. Willis eventually missed a 39-yard field goal wide left, leaving the Wildkats empty handed on a 16-play drive that shaved almost eight minutes off the clock.

Consol cruised down the field in the final 1:32 and took a 10-7 lead at halftime after Mo Foketi made a 26-yard field goal with four seconds left in the second quarter.

The eyes of the Tigers now turn toward District 10-5A Division II. Consol will open district action against Lamar Consolidated at 6 p.m. next Saturday in what will be the Tigers’ first true road game of the season.

“I hope they learn you’ve got to keep your heads up and forget about it now,” Fedora said. “Predistrict’s over with. The real season starts, and you’ve got to take it one game at a time.”