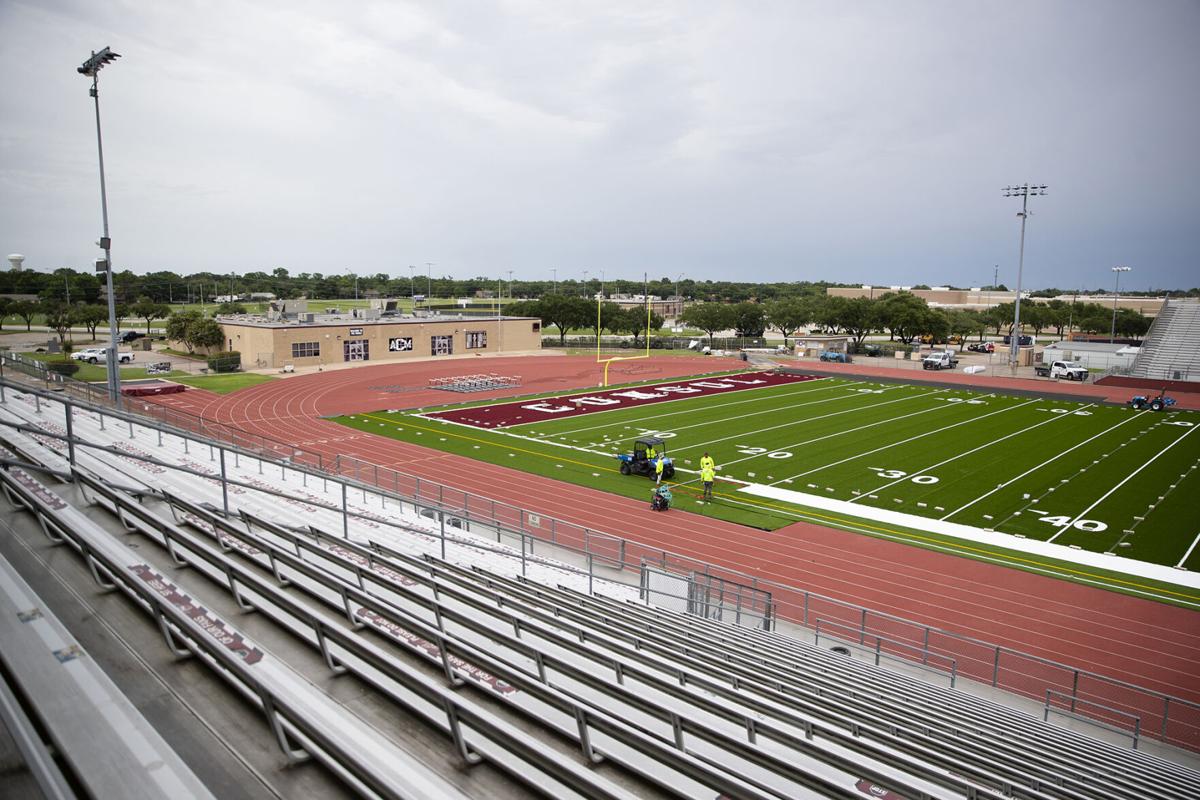 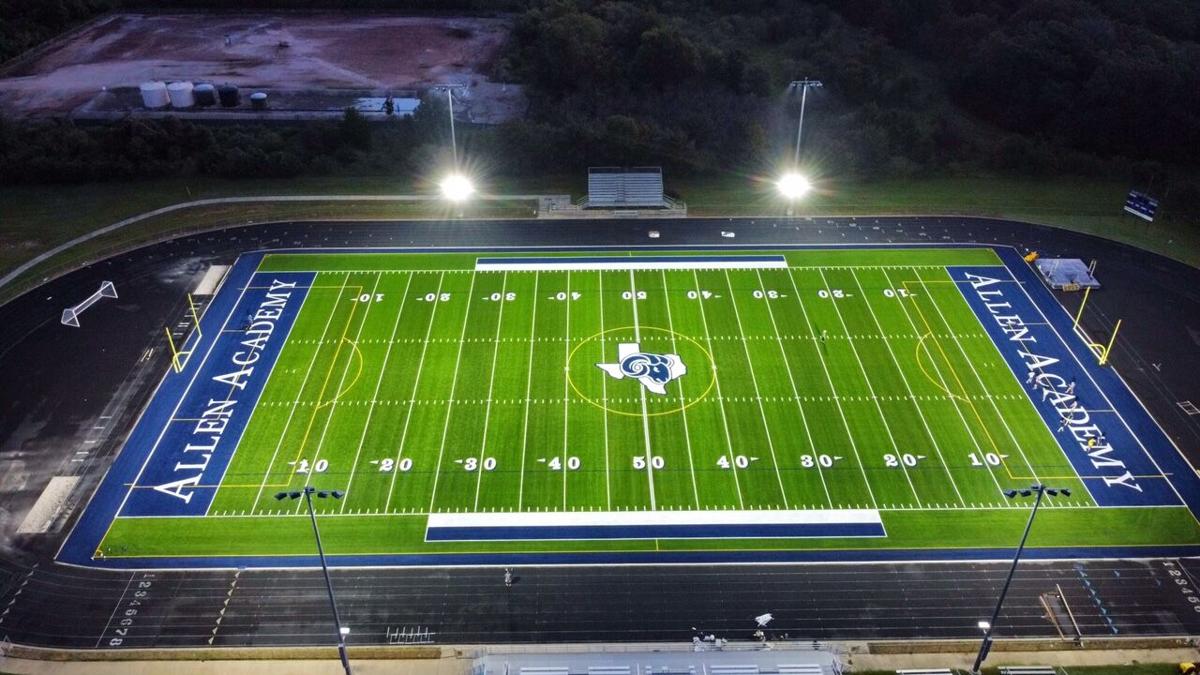 Allen Academy renovated Baker Field this summer, adding new turf and LED lights to the stadium. The Rams will host BVCHEA in their season opener on Thursday.

Walsh said it only took a couple days working on Adobe Photoshop to come up with a couple of potential designs that incorporated things Huff hoped the new field would feature, such as black end zones and a bigger school logo in the middle of the field.

Those hopes came to fruition as one of Walsh’s designs was approved. The Cougars were able to use their new turf for the first time on Aug. 14 during an intra-squad scrimmage.

“I know just enough to be dangerous at Photoshop,” Walsh said. “Enough to get [Huff’s] ideas that he had, put them down and let us look at different options.”

The school board unanimously approved the purchase of new artificial turf fields and LED stadium lights at both College Station and Consol in March, using savings from the 2015 bond funds to complete the projects, which cost just north of $1.7 million. Construction began this summer.

Huff and Consol coach Lee Fedora extended their gratitude to the school board and superintendent Mike Martindale for getting the project approved.

“I’m really pleased with our board and everybody pushing to get our field redone because it’s really nice out there,” Fedora said. “It’s got that soft cushion on it, it’s cooler, the kids really like it and it looks really nice.”

“By going with the black end zones with the white letters, it just stands out so much more and matches what’s around our bleachers more,” Huff said. “It all blends together and I think it really makes the purple in the middle stand out.”

The field has alternating shades of green, a feature that didn’t cost more and one Huff said he’s eyed doing for a number of years.

“It’s a different look and it’s a good look,” Huff said. “The kids really, really like it and sometimes it’s all about the kids and what they like.”

“What’s really strange is the field is so bright and clean, the video looks different,” Huff said. “I asked Coach Walsh, ‘Did we get new cameras?’”

Consol’s new field features maroon end zones that say “CONSOL” and “TIGERS.” In the middle is the school’s classic “ACM” logo, which is a new feature. The logo dates back to when Fedora played for the Tigers in the late 1980s.

“I’m glad we finally got that done,” Fedora said of the new midfield logo. “When I got here, it wasn’t done and I never understood why they didn’t have ‘ACM’ in the middle and that was one of the things I wanted to put in there. It’s great to go back to what it used to be.”

More facility renovations could be on the way at Consol. In July, the school board called on a $83.1 million bond that will be voted on this November, which is set to allocate just over $5 million to renovate the field house, press box and sound system at Tigerland Stadium.

Allen Academy spent the summer renovating more than its football field. Not only did the Rams install new turf, but upgrades were made in the gym, too.

A new playing surface was put in beginning in late July with construction lasting almost four weeks. Round Rock’s RS3 Turf, which is owned by Hall of Fame pitcher Nolan Ryan and his son Reid, installed the new playing surface. New LED lights were also added to Baker Field.

“It was a busy summer with a lot going on with the gym and the field, but we’re very pleased with the project that everything came together just in time to start the season,” Allen head football coach and athletics director Adrian Adams said.

A two-week project in the gym consisted of painting the walls navy from the old royal blue to reflect the school’s change in colors. The gym floor was resurfaced and padding was added to the walls. The football field also shifted to having navy instead of royal blue.

“Everything is pretty consistent across the board,” Adams said.

Although Allen plays TAPPS 6-man football, the new turf is still suited for 11-man, giving the Rams flexibility in hosting games. The Rams will play the first game on the turf Thursday when they host BVCHEA to kickoff the seven-game Allen Showcase, featuring games on Thursday, Friday and Saturday.

“My first two years here, Snook played their home games here, so we have an 11-man field so the ability to rent is always big,” Adams said. “We’ll always have that option here in the future if teams want to play playoff games here, then we can host them for 11- or 6-man.”

Allen Academy renovated Baker Field this summer, adding new turf and LED lights to the stadium. The Rams will host BVCHEA in their season opener on Thursday.