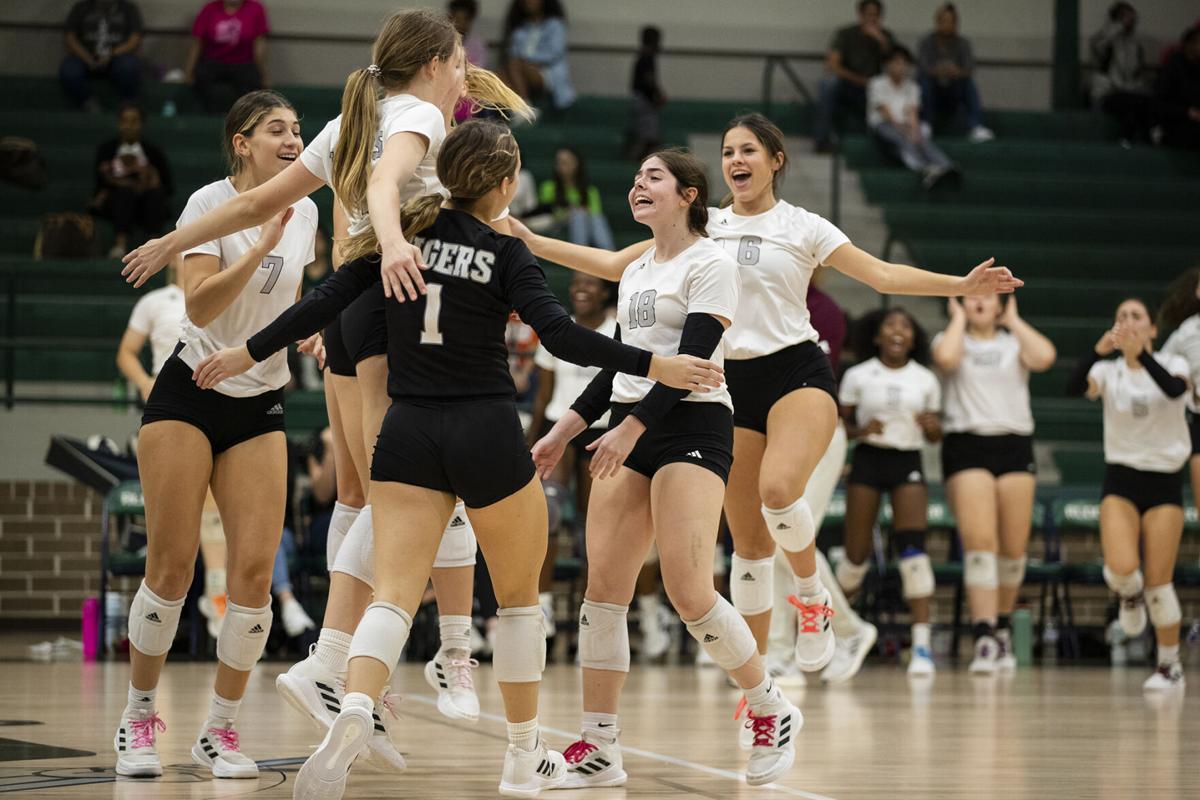 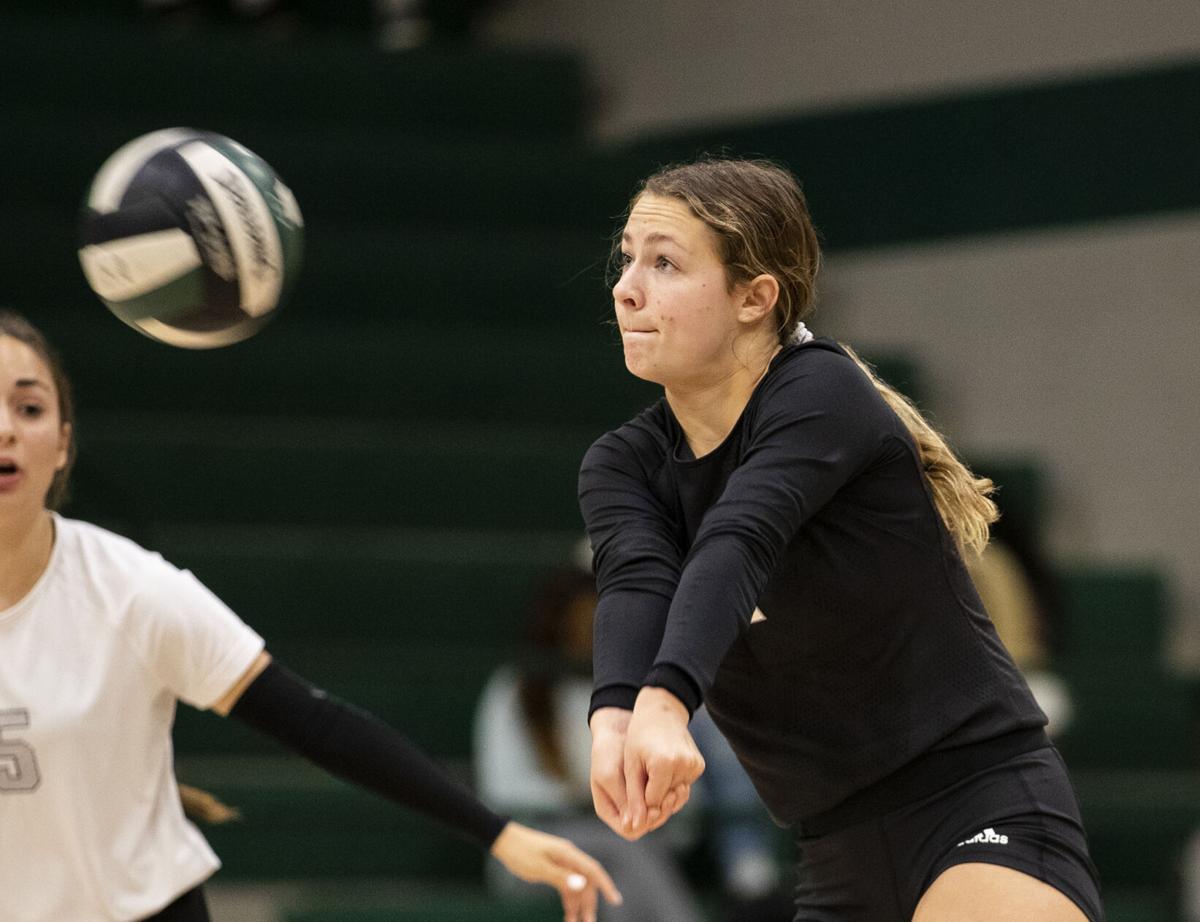 A&M Consolidated’s Gracen Harrell passes the ball during the Lady Tigers’ match against Rudder at The Armory on Tuesday.

A&M Consolidated’s hitting corps gave a master class in controlling the net Tuesday night, lifting the Lady Tigers’ to a 25-23, 25-21, 25-23 victory over Rudder in the District 19-5A regular-season finale at The Armory.

With the win, Consol (27-15, 12-4) remains tied for second place in the standings with Brenham (29-13, 12-4) behind first-place College Station (35-2, 16-0). The Cubettes swept Katy Paetow on the road Tuesday and will flip a coin with Consol on Wednesday to determine playoff seeding.

Before the Lady Tigers could turn their focus to the postseason, they had to get past the scrappy Lady Rangers (25-16-1, 6-10) . Consol leaned on its hitting trio of Ava Derbes, Emma Pahl and Lesley Munoz, who combined for 30 kills with Derbes and Pahl each knocked down the clinchers in sets one and three.

“They’ve been dominant all year, and the last game of the season just amplifies that a little more,” Consol head coach Colton Conner said. “Between Emma, Ava and Lesley, who I thought had a great game tonight, they were unstoppable at the net.”

Despite their effort at the net, the Lady Tigers often played from behind in the first set, which had nine ties and six lead changes. Consol tied the set three times before taking a 7-6 lead on back-to-back kills from Derbes. But the Lady Rangers used a 6-2 run to regain control as Rudder senior middle blocker Asani McGee had a block and two kills. Rudder continued to lead until Consol mounted a late comeback on an 8-2 run that included four kills from Pahl and Derbes to secure the set.

“I challenged them ... how much fun are you going to have today? Because that’s what it is,” Conner said. “When the energy and the passion is on your side of the court, a lot of great things happen.”

Errors hurt the Lady Rangers in the second set with only nine of Consol’s 25 points coming from kills or aces. The errors help Consol build a 18-13 lead as Rudder struggled at the net. But despite their mistakes, the Lady Rangers remained in the set and used three kills and a Consol error to get within 23-21 before the Lady Tigers used another kill and Rudder error to win the set and take a 2-0 match lead.

“That separates a lot of the time whether you’re in the playoffs or not is eliminating mistakes,” Rudder head coach Jacky Pence said. “We still found a way and pushed them and 25-23 twice on a team that’s done really well and going to the playoffs ... I’m really proud of us.”

In the third set, Consol had to battle back after its 17 errors almost forced a fourth game. The Lady Tigers struggled at the net early, but their hitters rallied for an 11-1 run to take a 14-8 lead with seven kills during the stretch.

“We tell them all the time if we keep the ball on our side of the court, it’s hard for a team to come back and beat us,” Conner said. “When we’re terminating first ball and we’re taking care of our serves, we’re a tough team to beat.”

Rudder was led by McGee, who had 14 kills, three blocks and two aces. Setter Regan Aponte had 18 assists, and libero Gabby Baker had 17 digs.

“Tonight she was pretty flawless,” Pence said of McGee. “Every player has up and downs, and she struggled a little bit the last few matches, but I loved that she has a great match to finish.”

NOTES — Consol will face Dripping Springs in Giddings at 4:30 p.m. Friday in a warmup game. ... Rudder celebrated its nine seniors on Tuesday, including McGee, Joceline Garcia, Hannah Currie, Ashlyn Little, Giselle Parra, Jordan Pfeffer and Audrianna Allen, along with managers Courtney Jeske and Victoria Patranellla. “This has been a really fun team,” Pence said. “I know a lot of teams are starting their third season, so I hate that it’s over for us. It’s been a good team. We’ve had a lot of good moments.” ... Rudder won the JV match 18-25, 25-11, 25-17. Consol won the freshman A match 25-15, 25-18, while Rudder freshman Green won the B match 21-25, 25-16, 27-25. Rudder’s JV finished the season at 17-17. Its freshman finished 7-18, and Rudder freshman Green ended at 7-11.

A&M Consolidated’s Gracen Harrell passes the ball during the Lady Tigers’ match against Rudder at The Armory on Tuesday.