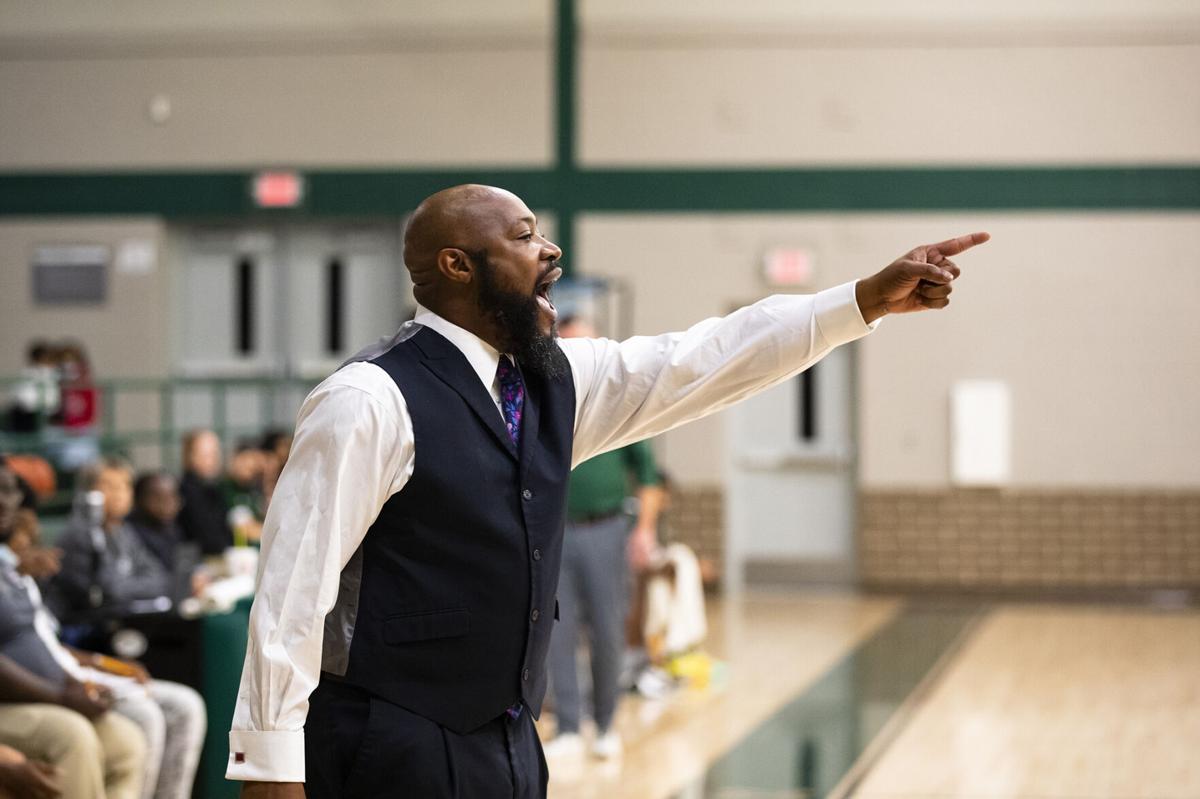 A&M Consolidated head boys basketball coach Andrew Daily instructs his players during their District 19-5A game against Rudder on Friday at The Armory. 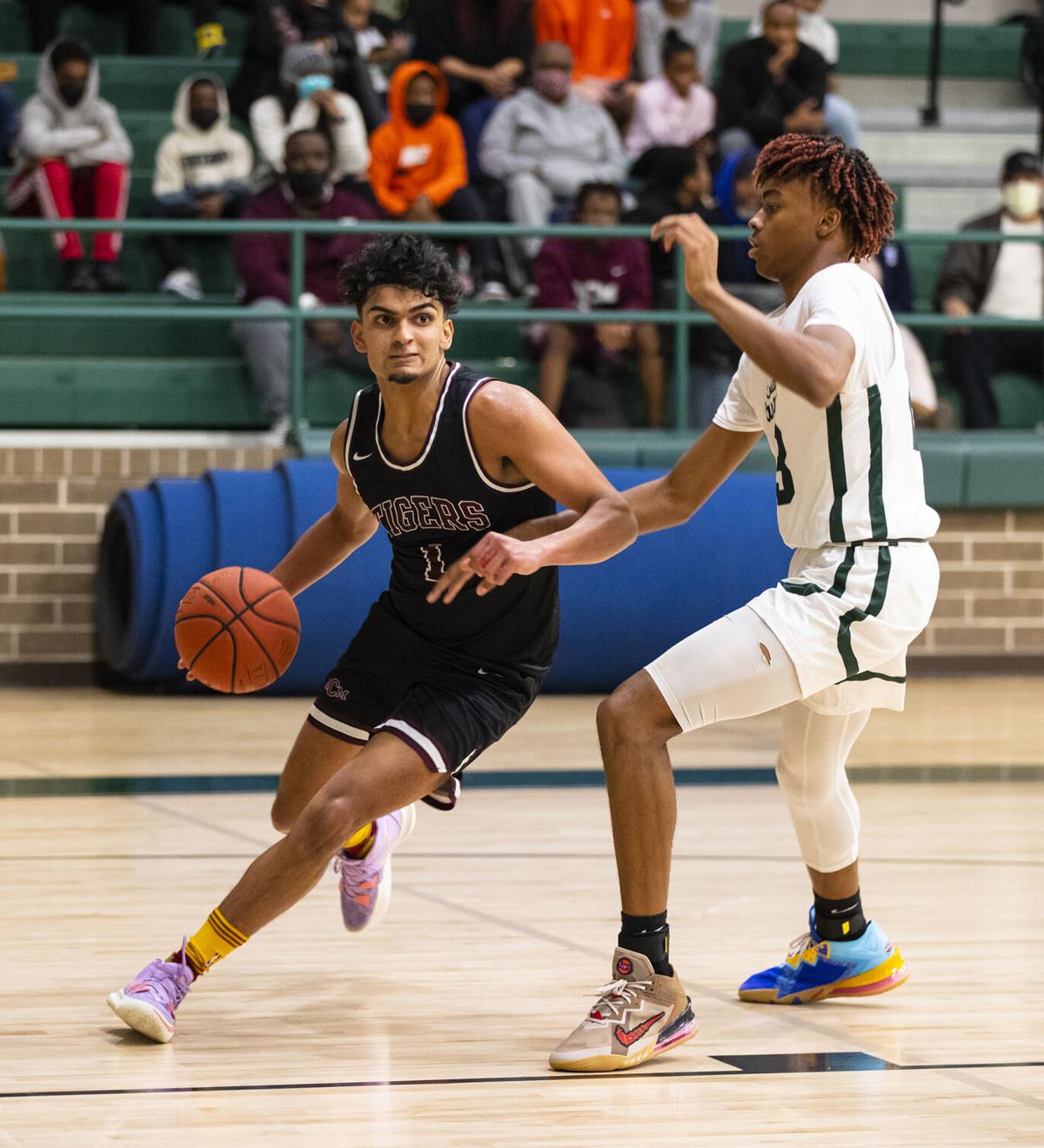 The A&M Consolidated boys basketball team is a big proponent of second chances, especially when they lead to wins.

Consol controlled time of possession in the first half and scored 16 points off second-chance opportunities for a 21-point halftime lead en route to a dominating 70-51 victory over Rudder in District 19-5A play at The Armory on Friday.

Rudder was in control in the opening quarter and took a 11-4 lead with 4:47 left in the period. The Tigers kept inching closer but didn’t take their first lead until the two-minute mark when Kaden Lewis made a three-point play and Zaylen Duren knocked in back-to-back 3-pointers for a lead they never relinquished.

“Rudder came at us quick and did a great job with that,” Consol head coach Andrew Daily said. “... [We] weathered the storm and kept battling. We knew eventually we could possibly wear them down to get to the basket the way we wanted to.”

Consol’s patience paid off in the second quarter as the Tigers went back to their up-tempo offense and scored eight points off turnovers and putbacks during an 18-0 run that lasted four minutes.

“When you turn over that many times, you really don’t have much of a chance,” Rudder head coach Mike Carrabine. “[Consol] caused a bunch of that and took advantage of [it].”

“That’s one thing we continue to stress and emphasize in regards to what we need to do defensively,” Daily said. “The main thing is to disrupt whatever [Rudder] strives to do on the offensive side, and if we’re able to do that, we can take advantage of that on the other side with layups and baskets.”

Consol made 15 of 38 shots from the field in the first half, more than doubling the Rangers’ attempts (9 of 17).

“I think at the start we made some good passes,” Carrabine said. “Then after a long stretch we just threw the ball to everybody but ourselves, which is not a good recipe to be very successful.”

For the Tigers, the win was the momentum swing they needed after falling to Katy Paetow in their first district loss Tuesday.

“A great way to bounce back,” Daily said.

Rudder outscored Consol 30-28 in the second half and even cut the Tigers’ lead to 10 points following a 17-4 run to open the third quarter. Rudder found success in the paint thanks to the trio of Jeremiah Johnson, CJ Nash and Kevin Holmes, who combined for 14 points in the period.

“Once we slowed down instead of throwing the ball all over the city, we played much better,” Carrabine said.

But even with Rudder chipping away at Consol’s lead, the Tigers remained in the driver’s seat, using a layup and 3-pointer to take a 54-40 lead into the final quarter.

Rudder then lost Johnson to foul trouble in the fourth, and Consol took advantage by going on a 16-4 run to put away the game.

Jackson finished with 15 points and eight steals. Lewis had 12 points and two assists. Ali had 10 points and four steals. Duren and Justin Gooden each scored eight points, while Jessie had seven.

Both teams will continue district play at 6:30 p.m. Tuesday. Consol will be at Magnolia West, while Rudder hosts Brenham.

Next: Brenham at Rudder, Consol at Magnolia West, 6:30 p.m. Tuesday

The A&M Consolidated boys and girls swimming teams defended their titles at the District 19-5A meet Friday at the Belton ISD Aquatic Center.

Normangee touts itself as the deerest place in Texas, and few are dearer to the community than Joseph Jones, the town’s favorite son for the l…

The Rudder girls basketball team took its best shot at District 19-5A leader College Station on Tuesday night, but key plays in the final two …

Following a rocky three-game road trip, the Bryan girls basketball team made the most of its return home with a 64-49 win over Killeen Shoemak…

A stiff Brenham defense made finding a finishing touch slightly harder to come by for the A&M Consolidated girls soccer team, but the Lady…

A&M Consolidated head boys basketball coach Andrew Daily instructs his players during their District 19-5A game against Rudder on Friday at The Armory.