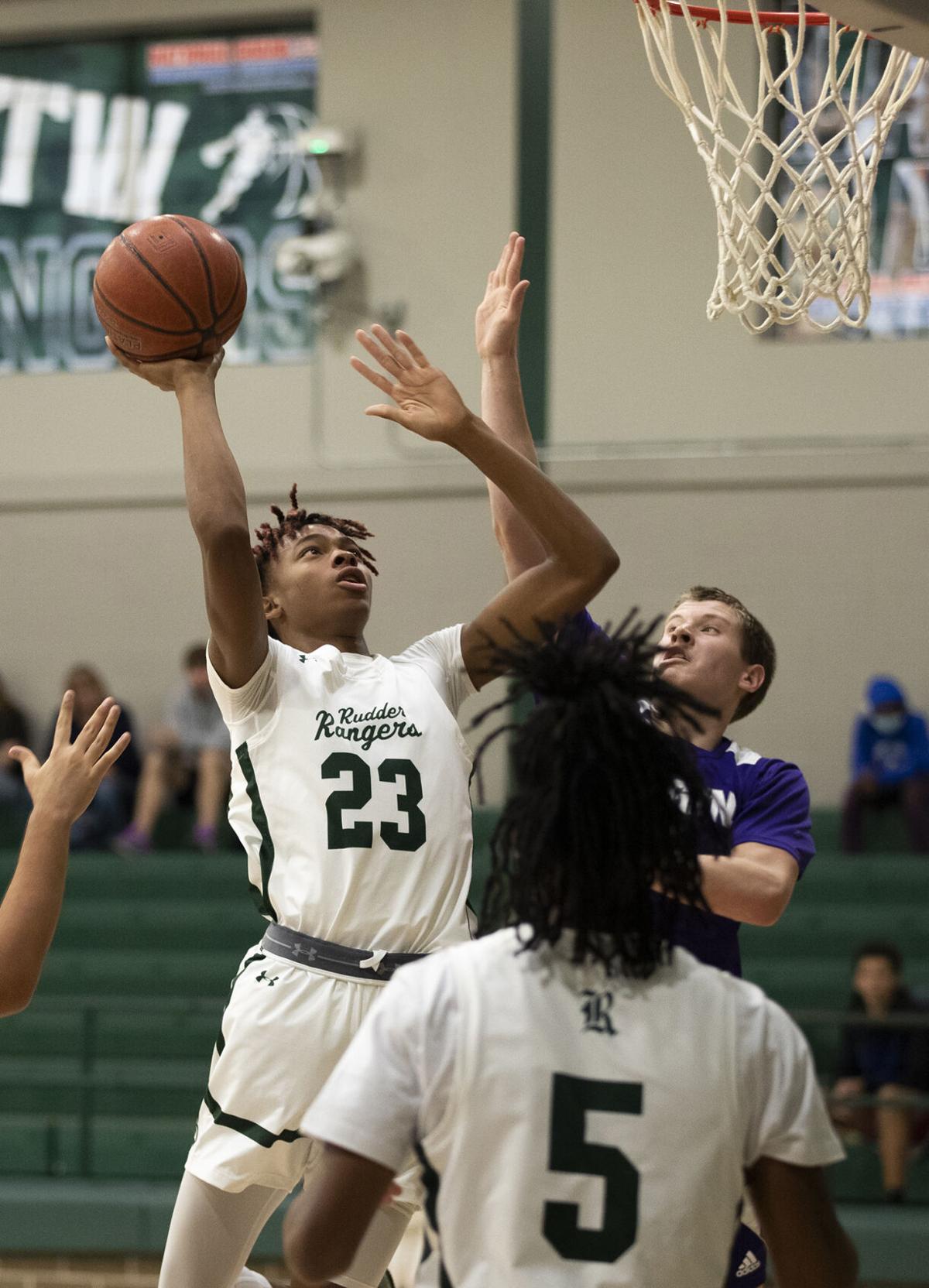 Rudder’s Kevin Holmes (23) takes a shot over Elgin’s Josh Sides during their nondistrict game Tuesday at The Armory. 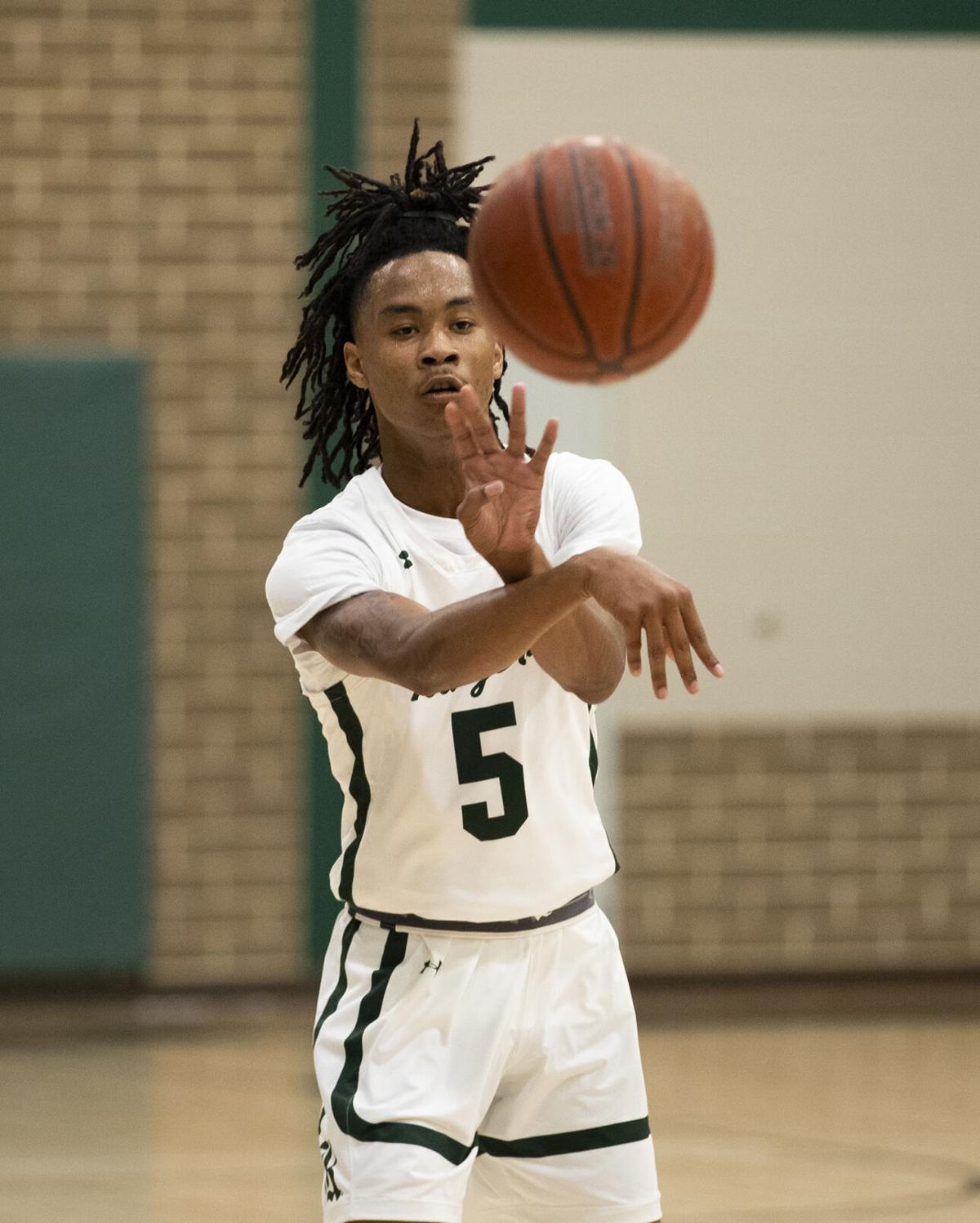 Rudder’s Victor Grear-Brazzell (5) passes to a teammate during the Rangers’ game against Elgin at The Armory on Tuesday.

The Rudder boys basketball team got an early start on Thanksgiving, feasting on the Elgin Wildcats for a 55-44 nondistrict victory between Class 5A clubs Tuesday afternoon at The Armory.

Rudder (5-3) scored eight straight points capped by a 3-pointer from senior Ethan Meaux for a 16-9 lead with 1 minute, 22 seconds left in the first quarter. The Rangers controlled play the rest of the way. Elgin (6-2) was coming off a second-place finish at the San Antonio Southwest tournament, but the Wildcats struggled on both ends.

Rudder had a strong perimeter game, hitting eight 3-pointers, half of them in the first quarter en route to a 20-11 lead. Rudder’s solid shooting opened the lane for the Rangers to attack the basket. Rudder also hustled for key offensive rebounds to help maintain its lead.

“We felt real comfortable shooting the ball, especially in the first half because there was no one on us,” Rudder head coach Michael Carrabine said. “For us, [eight 3-pointers] is quite a few. We usually just make a couple.”

Elgin wouldn’t budge from its zone defense, so Meaux hit a pair of 3-pointers in the first quarter with senior TJ Greene and junior Victor Grear-Brazzell each adding one as the Rangers found open shots with relative ease.

“TJ Greene did a good job for us, and Ethan has been one of our better shooters all year,” Carrabine said.

Senior Darrius Tates and Meaux hit back to-back 3-pointers in the second quarter to match two Elgin 2-point baskets, giving Rudder a 32-22 lead with 3:27 left in the first half. Rudder had five players hit 3-pointers with senior Robert McGee and junior Landon Heslip getting involved in the third quarter as Rudder maintained a comfortable lead with Elgin continuing to pack the paint.

“I don’t think [Elgin] wanted to play us, man, because [they were] concerned with our quickness,” Carrabine said.

Rudder complemented its perimeter game by getting the ball inside to 6-foot-3 Kevin Holmes, who scored a game-high 19 points on the strength of eight two-point baskets. Holmes had a couple driving layups and a dunk. He also scored off two offensive rebounds.

Rudder slowed down the pace for an anti-climactic fourth quarter.

“We needed to work on our delay game there at the end, which we haven’t had much opportunity to do,” Carrabine said.

Rudder showed it could use more work, missing a dunk, a layup and several free throws, but it did a good job running off at least 30 to 45 seconds per possession a few different times while pushing the advantage to 53-37 with 3:24 left.

Rudder was coming off a 1-3 weekend at the Austin tournament, beating Austin Crockett but losing to Katy Cinco Ranch, Round Rock Westwood and Burnet. Back home Tuesday, Rudder’s defense seldom was tested as the Wildcats settled for 3-pointers or turned the ball over. Rudder committed only three fouls in the game as Elgin didn’t make a single trip to free-throw line.

Elgin was led by junior guards Luke Gomez and Josh Sides, who each had 11 points.

Rudder will take the rest of the week off before returning to play at Lufkin on Tuesday.

Rudder’s Kevin Holmes (23) takes a shot over Elgin’s Josh Sides during their nondistrict game Tuesday at The Armory.

Rudder’s Victor Grear-Brazzell (5) passes to a teammate during the Rangers’ game against Elgin at The Armory on Tuesday.