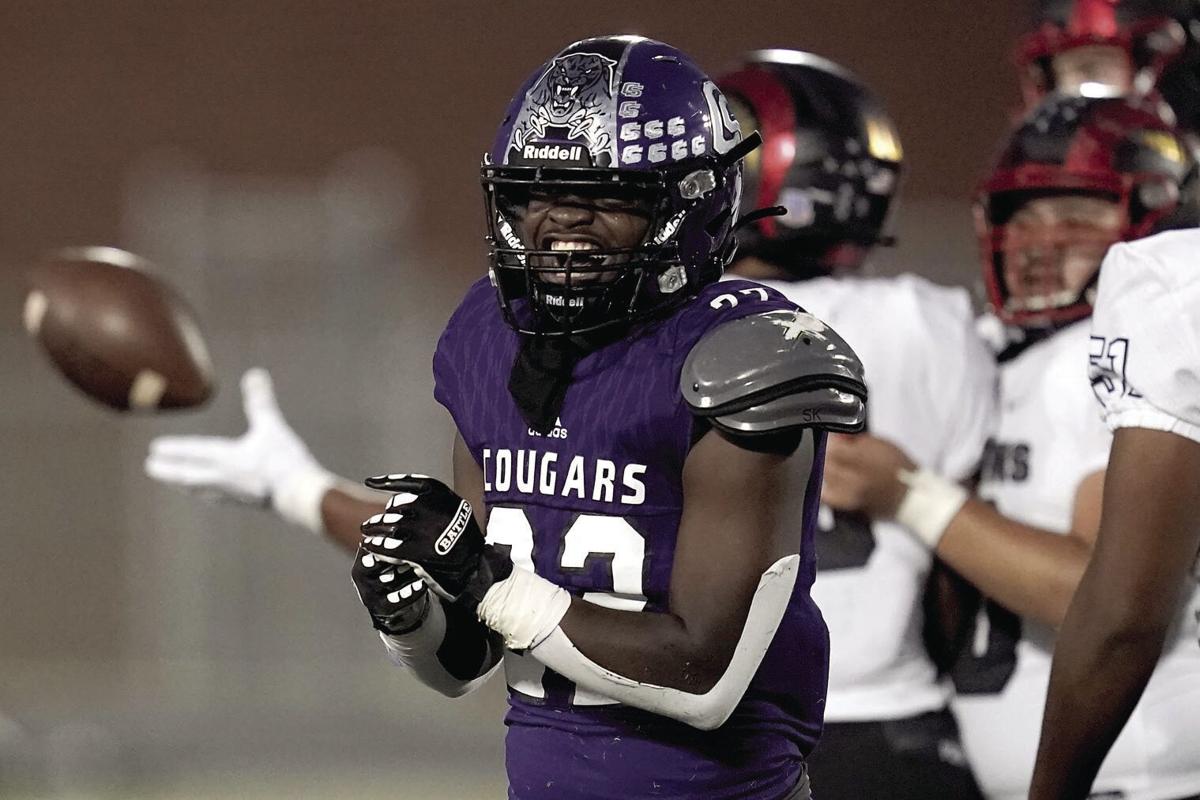 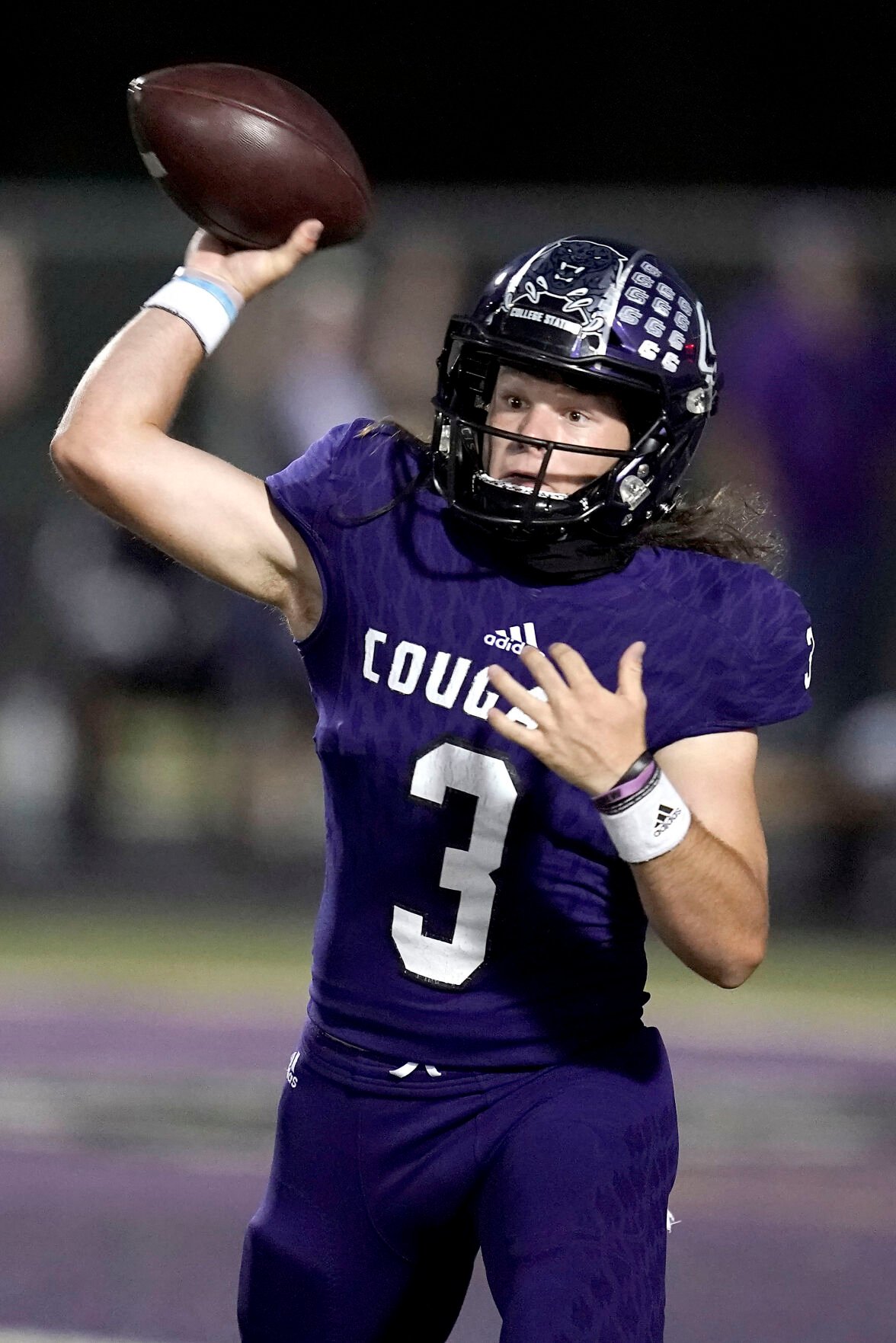 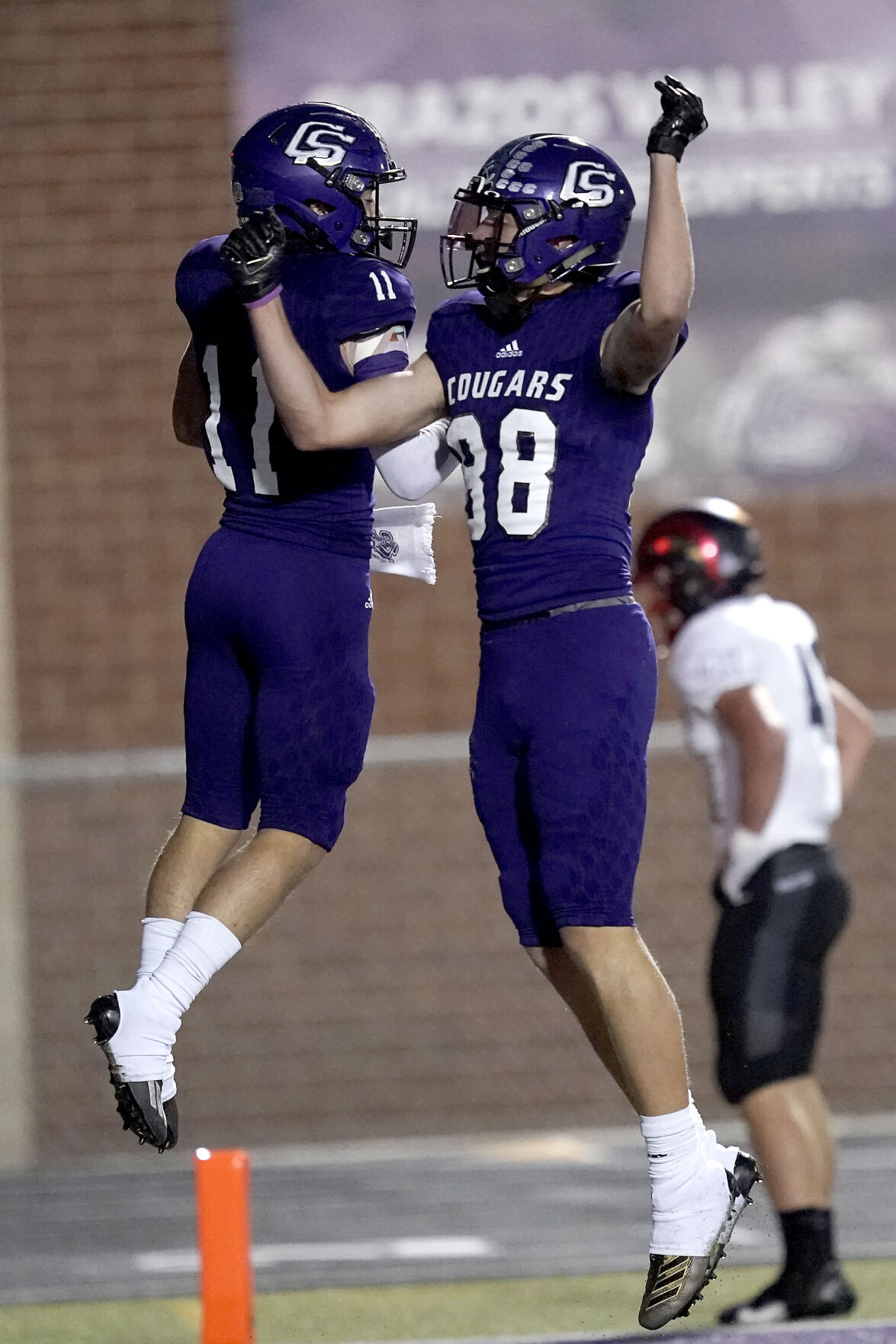 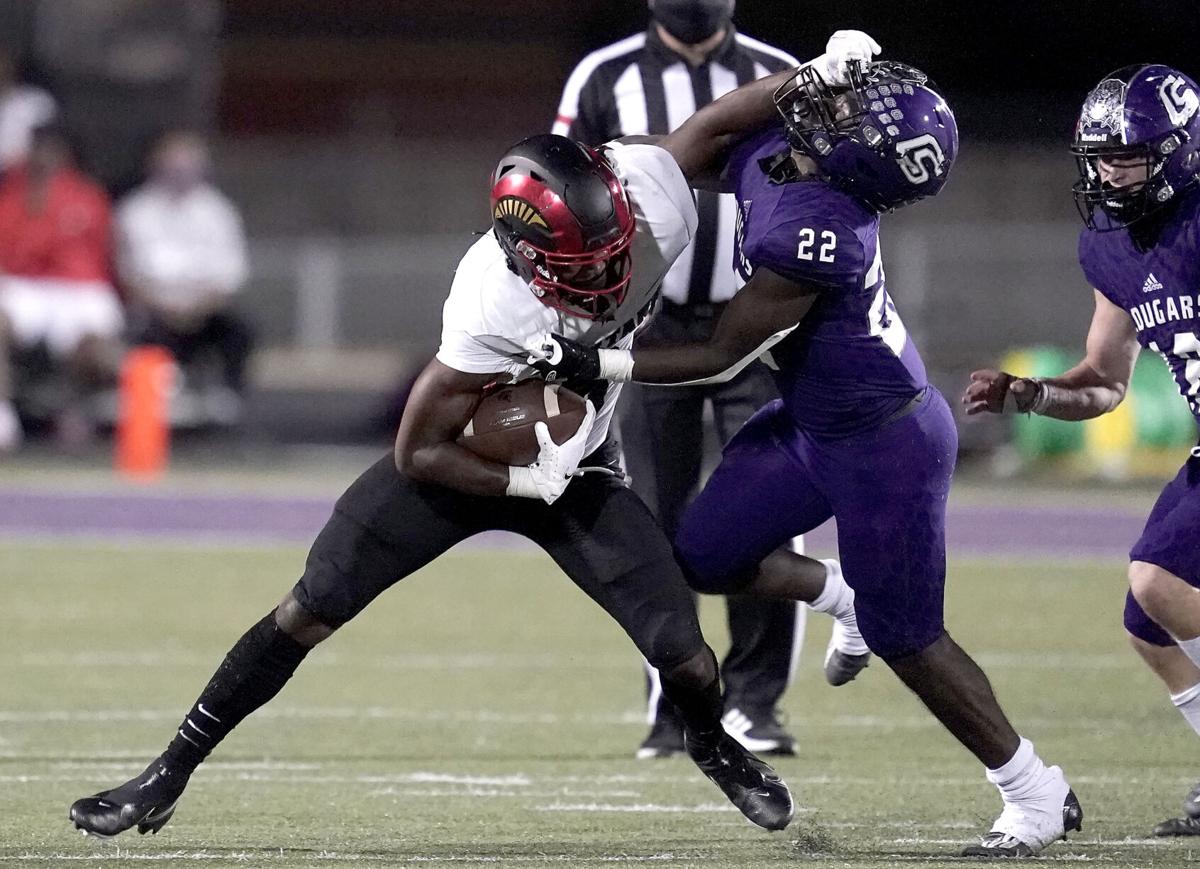 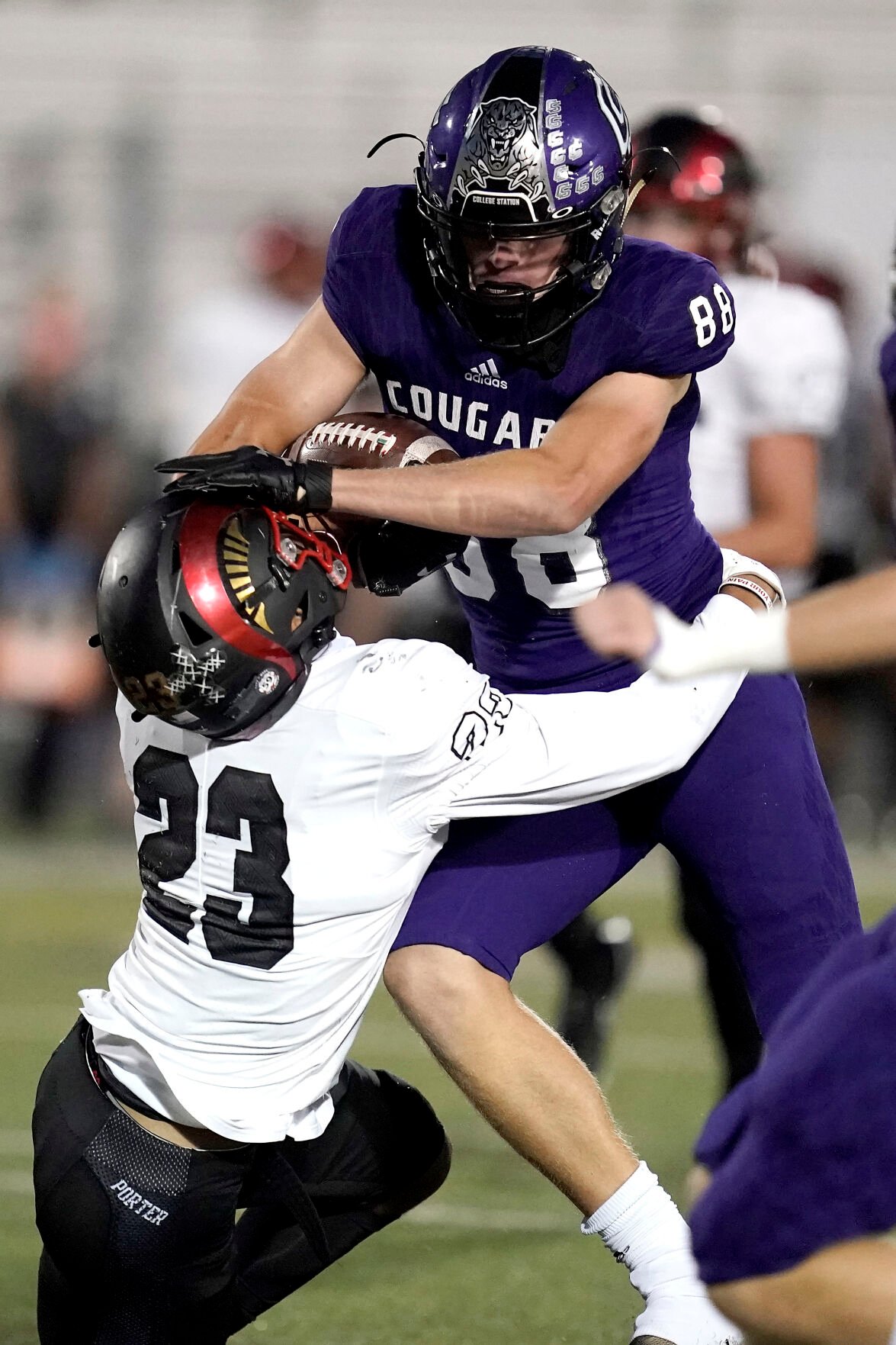 College Station’s Dalton Carnes knows how to set a tone.

The junior wide receiver scored two touchdowns in the first seven minutes, giving the Cougars the momentum they needed to beat New Caney Porter 24-14 for their first District 8-5A Division I victory of the season Friday at Cougar Stadium.

Carnes scored in the first 13 seconds on a 85-yard kickoff return after the Cougars won the opening coin toss and decided to receive to start the game.

Quarterback Jett Huff completed all five of his passes for 50 yards on College Station’s next possession, ending it with a 34-yard touchdown pass to Carnes, who reached the end zone for the second time after breaking multiple tackles and running up the right sideline for a 14-0 lead with 5:24 left in the first quarter.

“We took the ball tonight. We didn’t have a good feeling coming off of last week’s game and wanted to get something going,” College Station head coach Steve Huff said. “Without running an offensive play and to get a score is huge, so hats off to our kickoff return team. Those guys are doing a great job. Dalton there and then getting the catch, breaking a few tackles and taking it in was definitely big for us.”

College Station stumped Porter on fourth-and-goal to start the second quarter, but the Spartans’ Joshua Evans-Pickens scored on a 1-yard touchdown run on their next possession to inch closer to the Cougars down 14-7.

College Station’s defense held Porter to one touchdown going into halftime, but the Spartans tested the Cougars’ endurance, snapping 34 plays in the first half compared to College Station’s 18.

Porter continued to control possession in the second half, but College Station took advantage of the Spartans’ penalties and mistakes.

A penalty forced Porter to punt in the third quarter, and College Station took over at the Spartan 18-yard line after a bad long snap. The Cougars scored just two plays later on a 3-yard touchdown run by Roderick Brown with 8:46 left in the quarter.

College Station’s Jaxson Slanker led a crowd of defenders for another big stop on fourth-and-1, and the Cougar defenders did it again on the Spartans’ next possession, stopping a third-and-14 to close out the third quarter.

“We’re chasing the ball well and good things happen when you’re running,” Huff said. “It sounds cliche, but when our kids run and play fast, they’re a lot better. The offense [Porter] runs is very frustrating. They keep you on your heels a little bit.”

Porter scored again in the fourth quarter after College Station experienced some turbulence. Dawson Schremp missed a 44-yard field goal to start the quarter, and Carnes fumbled away a punt return, which put Porter at College Station’s 32. Porter then took advantage of the Cougars’ roughing the passer penalty on third-and-15 that would have been an interception by College Station’s Keshaun Cooper. After gaining a first down on the penalty, Evans-Pickens ran it in for a 22-yard touchdown to cut College Station’s lead to 21-14 with 6:15 left.

The Cougars made it 24-14 almost four minutes later after Schremp punched in a 38-yard field goal.

College Station was called for pass interference on Porter’s first play of the next possession but made up for the mistake with an interception by Cooper, sealing the victory.

“It was a little rough in places,” Huff said. “One thing I talked to the kids about is that we’re growing up. We have to be patient right now. It just takes a little bit of time, and we’re going to get those mistakes taken care of. We made some crucial mistakes in some inopportune times just like last week, but we were able to overcome them tonight.”

Rudder met its match on Friday.

It took almost four weeks, but the College Station volleyball team finally finished what it started.