World Series: Follow updates and scores as the Astros face the Braves

Texas A&M volleyball falls to No. 1 Texas in front of a record Reed Arena crowd
0 comments
Share this
{{featured_button_text}}
1 of 2 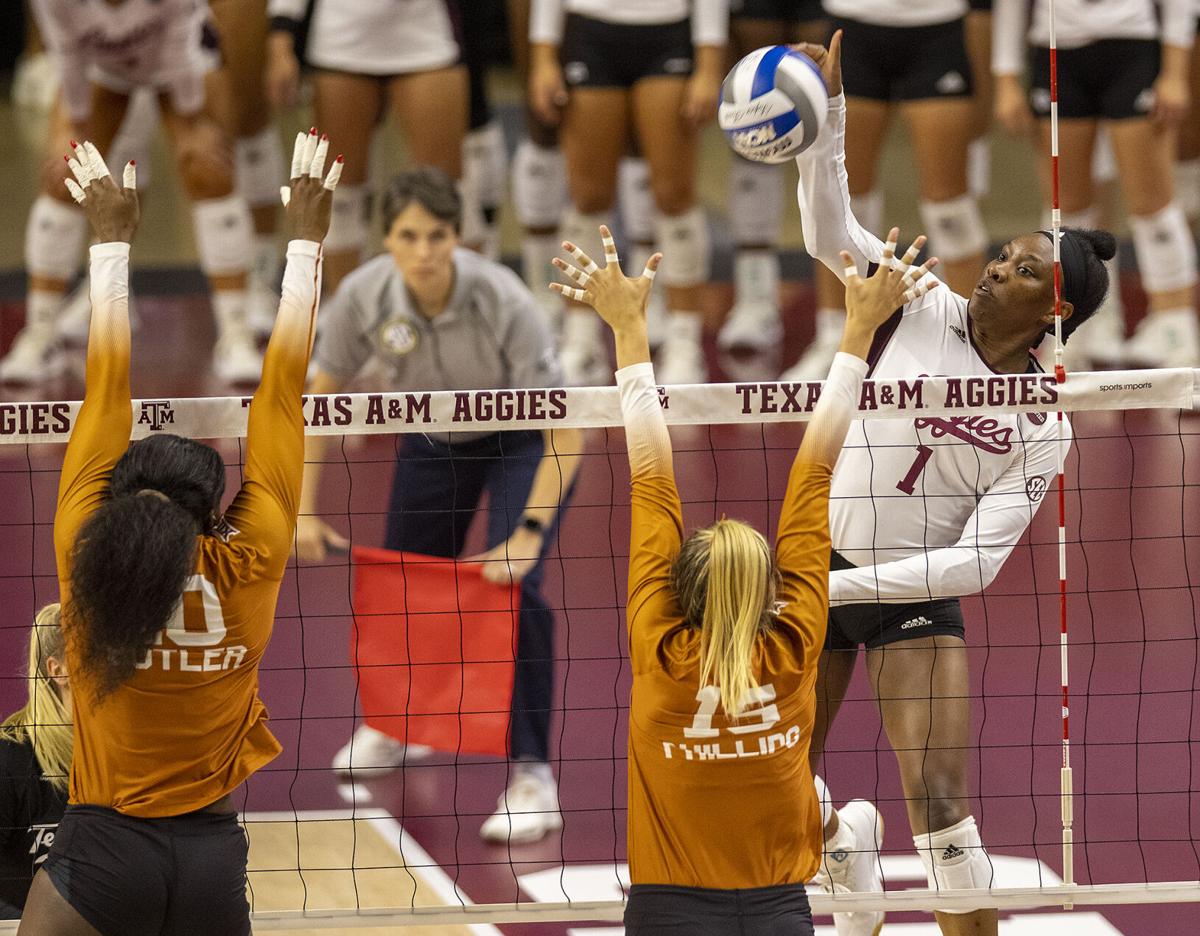 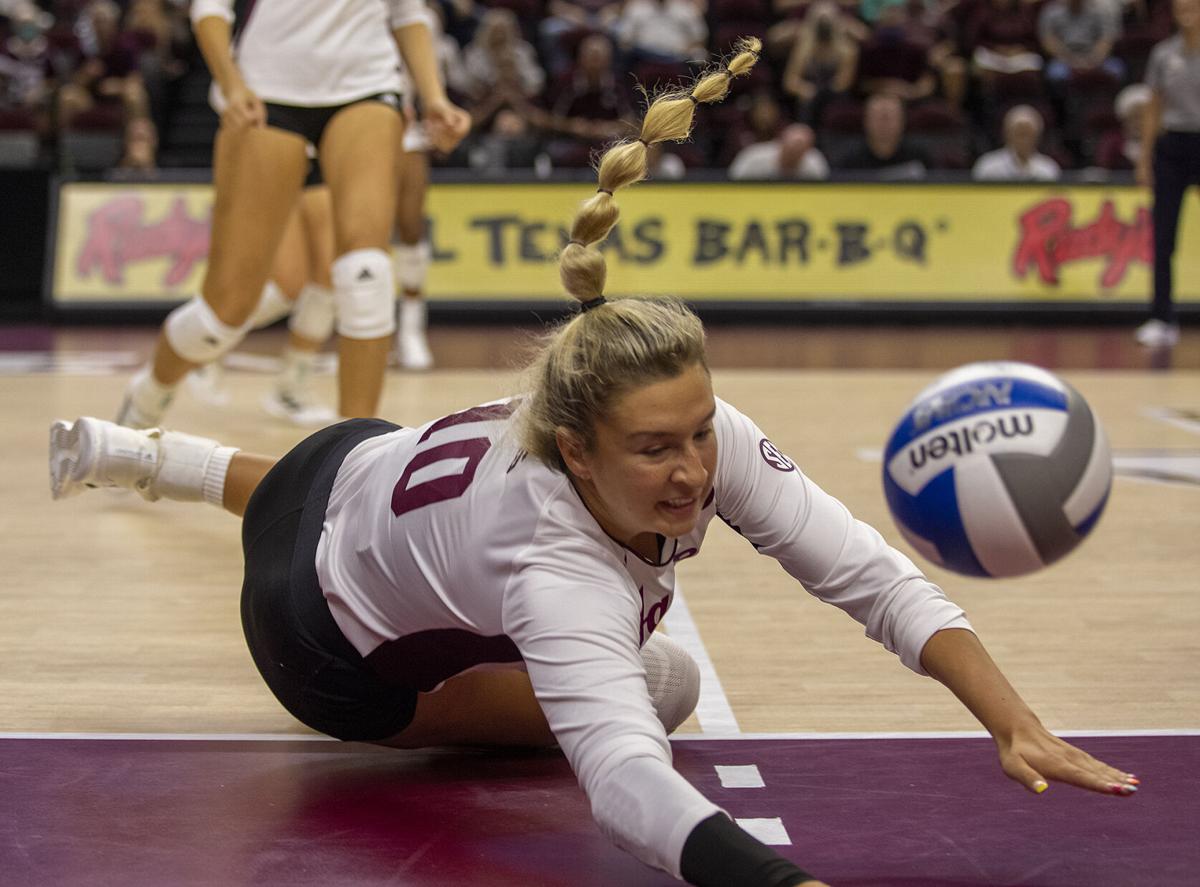 Texas A&M's Camryn Ennis comes up short of a dig against top-ranked Texas at Reed Arena in College Station on Friday.

The Texas A&M volleyball team used a Friday night match with Texas to test both the acoustics of Reed Arena and the No. 1 team in the nation.

The results were both memorable and disappointing in a 25-22, 25-14, 22-25, 29-27 loss to the Longhorns in front of a record 6,822 fans. While Texas took the match, A&M produced one of its best efforts of the season, taking a set and losing two others by a combined five points.

“I’m proud of the way we fought, for sure, but we have to play to win and finish, especially when the pressure is on them,” A&M head coach Bird Kuhn said. “We have now proven who we are and who we can be, and now it’s just being consistent.”

The Aggies (7-3) finished the match with four fewer kills than the top-ranked Longhorns (59-55), but A&M hit just .178. Texas (8-0), on the other hand, made better with its opportunities and hit .322. Texas junior outside hitter Logan Eggleston led all players with 21 kills, while hitting .327.

“It’s definitely something we talked about in the locker room, minimizing those errors,” A&M senior middle blocker London Austin-Roark said. “That’s what’s going to take us to that next level, especially against this team.”

Austin-Roark had 13 kills, working quickly with setter Camille Connor for an efficient .455 hit percentage. A&M outside hitter Morgan Christon had a team-high 16 kills but hit .120.

With a wall of noise surrounding the court from the start, A&M matched energy and points with the Longhorns in the first set. The Aggies mounted a 7-2 run through the middle of the frame to take a 20-17 lead, but Texas countered with an 8-2 run to close out the set. Eggleston had three kills in the final stretch as an aggressive Aggie squad suddenly grew tense.

The nerves carried over into the second set with Texas jumping to a 6-2 lead and controlling throughout for a 2-0 match lead.

But with the match on the line in the third set, the crowd and home team found renewed energy. Connor said she could feel the floor vibrating at certain moments during the frame.

“When they were serving, I remember thinking like, ‘Man, I don’t want to be serving listening to this, because I can’t even hear my thoughts,’” Austin-Roark said. “I definitely think we had a couple of their errors that are completely due to the 12th Man, so I think that’s amazing that they could pitch in like that.”

The crowd was the largest to watch the Aggie volleyball team in a home match and the third largest home or away. The largest, also against Texas, was 8,935 in Omaha, Nebraska, during the third round of the 2009 NCAA tournament. A&M also played in front of 7,998 at Hawaii on Sept. 1, 2000.

“The 12th Man was amazing,” Kuhn said. “I heard we broke the attendance record ... so that’s awesome. What a great way to start off the home weekend. Proud of that.”

The Aggies found Austin-Roark more frequently during the third set as she peeled off Connor’s back for quick sets and kills. A steady attack pushed the Aggies to a 21-16 lead, but Texas fought back with a 6-0 run for a 22-21 lead. Kills by middle blocker Mallory Talbert and Christon fueled a 4-0 finish to the Aggies’ one set victory of the night.

The momentum carried into the fourth set with a slam by Talbert giving A&M a 9-8 lead and drawing another roar from the crowd. A&M later tied the set at 19 and had a chance to put the set away up 24-23 but couldn’t pull it off, even with new life granted after a last-second video review extended the match two additional points. The Longhorns claimed five of the last seven points to escape the match with the win. Just like the first set, three of the final five points where kills from Eggleston.

Texas A&M's Camryn Ennis comes up short of a dig against top-ranked Texas at Reed Arena in College Station on Friday.