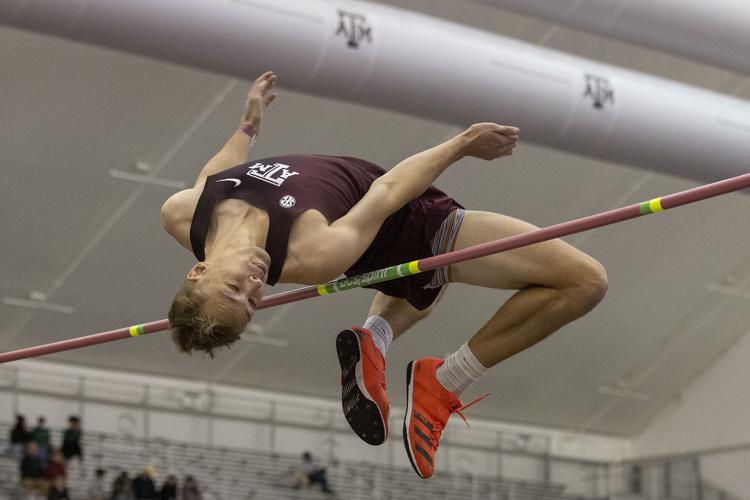 Texas A&M’s Jake Lamberth competes in the men’s high jump during the Ted Nelson Invitational on Saturday at the Gilliam Indoor Track Stadium. 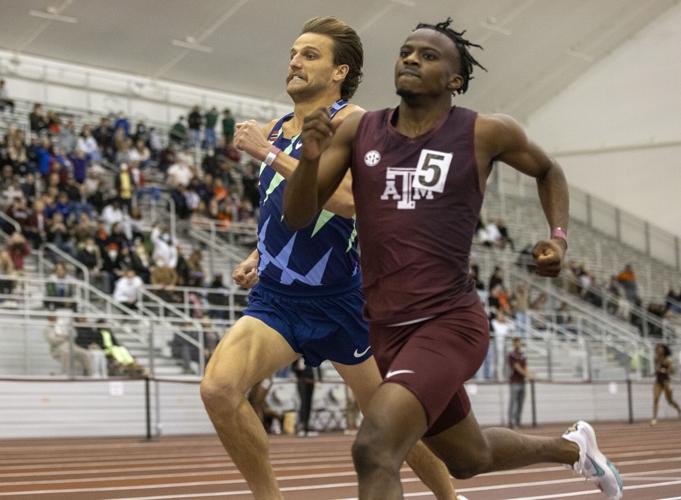 Texas A&M’s Brandon Miller, right, races down the final stretch of the men’s 800 meters during the Ted Nelson Invitational on Saturday at the Gilliam Indoor Track Stadium. Miller won by 0.01 seconds over Craig Engels from Union Athletics Club.

Texas A&M high jumper Jake Lamberth spoke with volunteer assistant coach Deon Lendore about some of his goals for the season Monday evening. Later that night, Lendore, a four-time NCAA Champion and Olympic bronze medalist, was killed in an automobile accident.

Lamberth said he felt Lendore helping him with every step of winning the men’s high jump as he cleared a personal-best 7 feet, 1 3/4 inches at the Ted Nelson Invitational on Saturday at Gilliam Indoor Stadium.

“I truly believe he was with me today,” Lamberth said. “I truly do.”

The A&M track and field program has lost two members of the program to automobile accidents over the last four weeks. Chance Gibson, a freshman distance runner, died in an accident on Dec. 18 followed by Lendore’s accident Monday.

Prior to the meet, A&M held a moment of silence for the two as well as for two former A&M assistant coaches who died in the last year: Ed Marcinkiewicz and Robert Parker.

“Deon Lendore brought this team together,” Lamberth said. “You saw the performances today. Coach Henry spoke on it. There was so many personal bests. There were so many people that came together as a tribute to themselves and their training and obviously those two that we lost. It was a huge deal.”

Lamara Distin and Brandon Miller also won events with personal-best marks. They were part of 10 different Aggies who won individual events Saturday and 16 who tied or bettered personal records on the second day of the meet.

Lamberth passed his previous record of 6-11 1/2 with his final jump and won the event based on fewest number of jumps needed to clear 7-1 3/4, breaking a tie with Texas-Arlington’s Bryson Deberry. Lamberth said has been motivated to improve after finishing 14th at the NCAA outdoor regional last spring.

“That set something in my mind that something was going to be different,” Lamberth said. “In track and field, that 7-foot mark is a lot bigger than it seems to be. It’s a milestone. Just to be able to flop over that is great. But now it’s the next bar.”

A&M’s Brandon Miller burst out to his fastest start to a season, running an indoor personal best of 1 minute, 47.48 seconds to win the men’s 800 meters. The sophomore led wire-to-wire, though he had to fend off professional runner Craig Engels on the back stretch of the final lap.

Engels was an alternate for the 2020 Olympic Games and runs for Nike’s Union Athletics Club.

“That’s not just a normal pro guy behind him,” A&M head coach Pat Henry said. “That’s one of the best Americans we’ve got. [Miller] is just very good. As small of a guy as he is, to be able to put together what he does is just an amazing feat. It’s an amazing job.”

Miller said he could see Engels on his tail while looking up at that stadium’s big video screen, which helped him find another gear.

“I believe in the abilities that God gave me,” Miller said. “I feel like I should be there as well. He was a gifted runner, and him pushing me was really good.”

Also in the field events, A&M senior Deborah Acquah won the women’s long jump with a leap of 21-1 1/4.

Two-time Olympic gold medal winner and former A&M All-American Athing Mu ran the women’s mile under her Nike sponsorship, winning by almost 10 seconds with a time of 4:37.99. The mark set a meet record, which was previously 4:44.87. Mu still resides in College Station where she trains individually and serves as a volunteer coach for the Aggies.

Mu said running the Ted Nelson Invitational as a professional was a much different experience than her first college home meet last year. She said she was thankful for the warm welcome the 12th Man gave her from the stands.

“Last year coming here and starting off my collegiate campaign and everything, I was just running,” Mu said. “No one really knew who I was yet. As the races have gone by, I’ve gradually gotten more and more supporters and fans. It’s not bad. I don’t mind it.”

Henry was unable to field a full squad this weekend due to COVID-19 issues throughout the program. With 18 athletes sidelined, some of the next generation of Aggies took the spotlight.

“We put a team on the track, but it’s not representative of who we are right now,” Henry said. “But that’s OK. Everybody’s got these kind of fights right now. For the people who got on the track and competed today, I thought we did a good job.”

The true adversity was mourning the loss of two key members of his program, Henry said.

“This was a very difficult week for this team,” he said. “When we lose Deon Lendore and as close as Deon was to everybody in this group, it’s hard to keep an eye on the target for many of them. So I thought a lot of them did a really good job.”

Texas A&M freshman Sam Whitmarsh will miss the remainder of the outdoor track and field season after a recent heart disease diagnosis, A&a…

Brenham’s Eric Hemphill announced his commitment to the Texas A&M track and field team via Twitter on Tuesday. The senior, who also plays …

OXFORD, Miss. — Texas A&M’s Katelyn Fairchild finished second in the women’s javelin with a throw of 172 feet, 5 inches, on Thursday at th…

Texas A&M’s Jake Lamberth competes in the men’s high jump during the Ted Nelson Invitational on Saturday at the Gilliam Indoor Track Stadium.

Texas A&M’s Brandon Miller, right, races down the final stretch of the men’s 800 meters during the Ted Nelson Invitational on Saturday at the Gilliam Indoor Track Stadium. Miller won by 0.01 seconds over Craig Engels from Union Athletics Club.