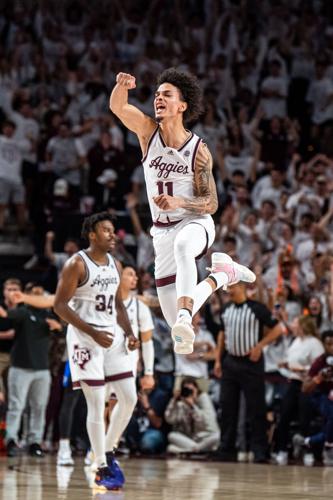 Reed Arena rocked with 110 decibels of pure jubilation when Texas A&M guard Tyrece Radford threw down a breakaway slam dunk that everyone — fans, players and coaches included — thought put the game to bed.

The Aggies ultimately notched their seventh consecutive win and fifth in Southeastern Conference play by a 54-52 margin over Florida on Wednesday, but not without a few nervy moments before the buzzer sounded.

Up by three with 23 seconds left, A&M (13-5, 5-0) needed a stop to earn its second win over the Gators (10-8, 3-3) in two weeks. Defensive specialist Andersson Garcia reached over 6-foot-11 Gator post Colin Castleton and pinned his layup attempt on the backboard, which led to Radford springing free for the breakaway dunk as a sea of white-shirted mayhem that made up the student section rocked behind the Aggie backboard.

The majority of students, bouncing and fist-pumping at Radford’s jam, had no idea that Florida’s Myreon Jones quickly launched a desperation 3-point attempt from just inside the half-court line that splashed the net and cut A&M’s lead to two with four seconds left.

“If you look at the film, you can see me ... I’m screaming. I’m hype,” A&M post Julius Marble said. “I’m looking at the ball, and then I realized, oh, there’s six or seven seconds left. I better go get back on defense, so I was probably the reason [Jones] got a good shot.”

Leading 54-52, A&M then tried to inbound the ball with guard Wade Taylor IV off the court and defensive specialist Andre Gordon in his place. Without Taylor and post Henry Coleman III, who had fouled out, on the floor, Garcia was forced into an unfamiliar position on the press break and ended up bobbling the inbound pass out of bounds, turning it over to Florida with slightly more than two seconds remaining.

Williams said he regretted not taking a timeout after Jones’ 3-pointer to reshuffle his lineup before that offensive possession.

“It was immature on my part,” Williams said. “We had that personnel grouping in to get a stop on the other end. Henry would have typically been in. ... I should have called timeout right then. I put Andy in a bad spot. [Taylor] wasn’t in the game. We need [Taylor] in a full-court situation. ... That was an unneeded turnover caused by poor coaching.”

An official review of the play as well as a timeout by Williams gave the Aggies enough time to set up their defense, and A&M ultimately forced a wild shot attempt by Jones that fell well short of the rim as time expired, allowing everyone in maroon and white the opportunity to exhale.

“We got caught up in the rah, rah and let that affect us on defense,” Marble said.

Like that final minute, little came easy for either team in the defensive struggle. A&M led 23-12 at halftime as A&M tied the program’s fewest points allowed in a half since the 1996-97 season when digital stats became available. The Aggies held Texas Tech to 12 points in the second half of a 47-38 A&M win in 2012.

Marble scored 12 of his team-high 19 points in the opening 20 minutes as one of the only players who could find some offense early. Florida was held without a field goal for over 11 minutes of the half.

“There weren’t a lot of easy baskets out there tonight on either side,” Florida head coach Todd Golden said. “Obviously, we did a really poor job in the first half making shots.”

Castleton finished with a team-high 14 points to go with 13 rebounds and six blocks.

“They way they utilize [Castleton], it just puts so much stress on you,” Williams said. “And they’ve changed so much in the two weeks since we haven’t played them, how they utilize personnel, some of the actions they are running. They play a lot faster.”

A&M guard Dexter Dennis scored 11 points and led the team with a career-high 16 rebounds, becoming the first Aggie to record at least 16 rebounds in a conference game since Robert Williams grabbed the same number against Missouri in 2017. The performance followed Dennis’ 12-rebound outing against Missouri in A&M’s last home game.

A&M last opened conference play at 5-0 in 2016 when the Aggies won their first seven games en route to a Sweet 16 appearance. Similar to that 2016 team, Golden said A&M looks like one of the best 10 or 15 teams in the country since the turn of the new year.

“I don’t know what our ceiling is,” Williams said. “I’m thankful for the first 2 1/2 weeks and to some degree I think there’s been lessons that have been learned from each of those. I think we tried to prioritize those lessons, and I think our guys are understanding those lessons. I think they’re executing those lessons.”

While Buzz Williams was working through a shooting drill with another player, a seemingly inconsequential statement from senior guard Tyrece R…

While the Texas A&M men’s basketball team squares off in its next Southeastern Conference matchup at 7:30 p.m. Saturday against Vanderbilt…

AUBURN, Ala. — A 28-7 run to close out the first half was enough to help the Texas A&M men’s basketball team end No. 15 Auburn’s home winn…

Watch: Mark French breaks down Texas A&M's loss to Kentucky and schedule ahead

Watch now as former Texas A&M men's basketball player Mark French breaks down the Aggies' loss to Kentucky and their schedule ahead.

As the Texas A&M men’s basketball team limped through its Southeastern Conference matchup with Vanderbilt on Saturday, an exasperated stud…

The Texas A&M baseball team will host its second annual First Pitch Banquet at 7 p.m. Feb. 11 at the Ford Hall of Champions at Kyle Field.…