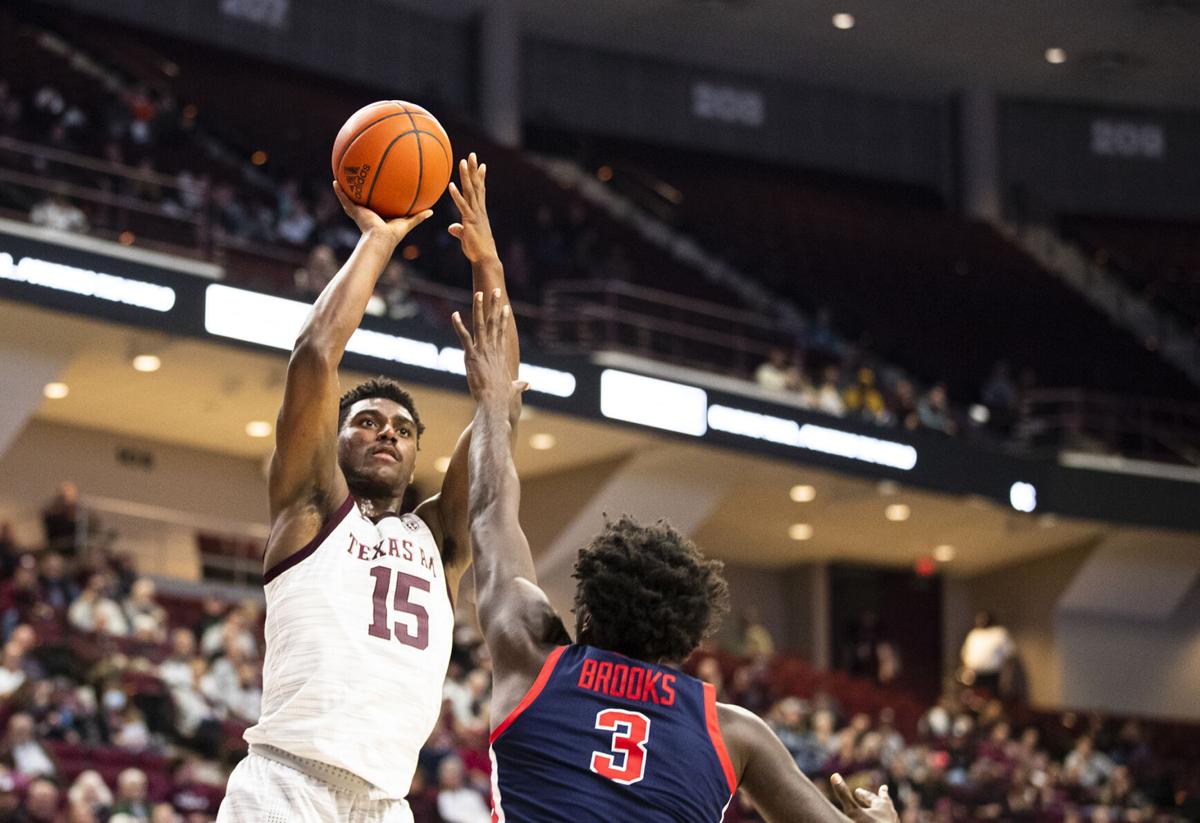 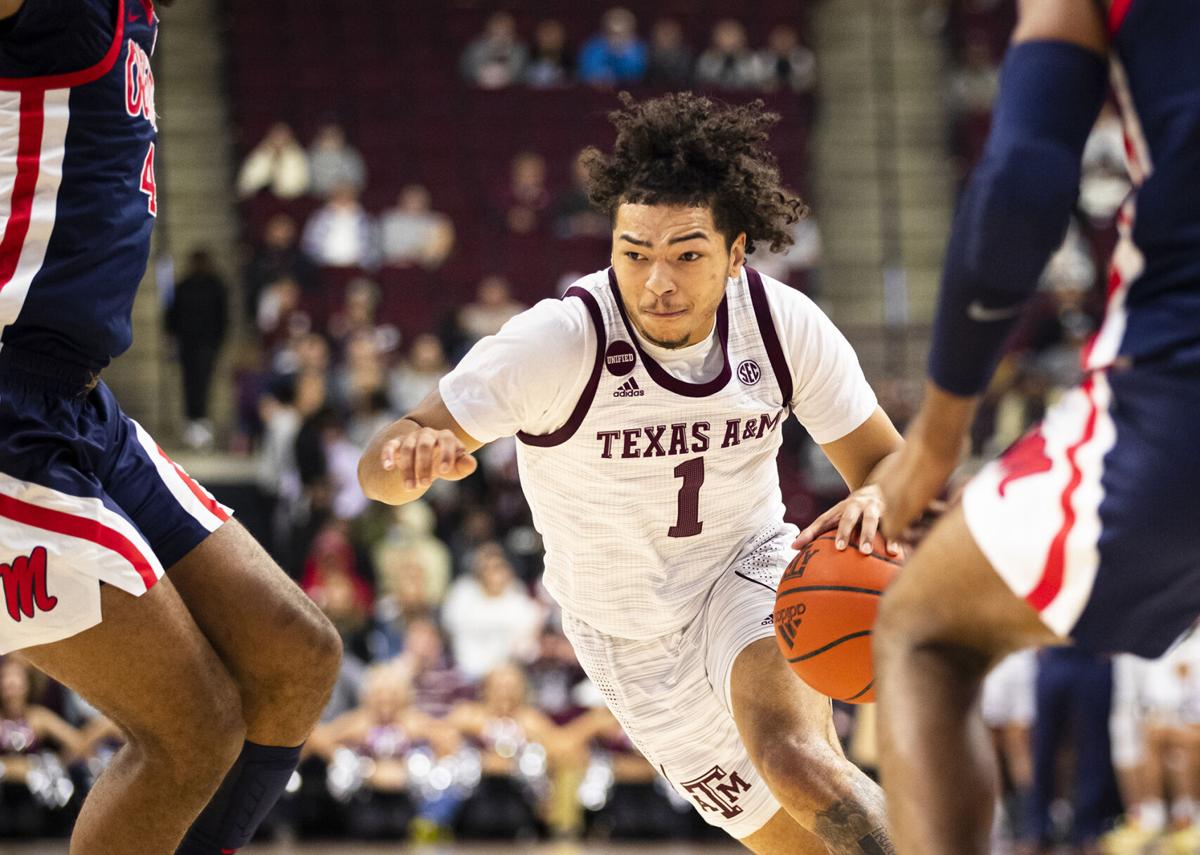 For the third straight game, the Texas A&M men’s basketball team held a lead of 17 or more points in the second half. Unlike the first two, the Aggies’ were able to hold on to their large margin Tuesday to seal a 67-51 win over Ole Miss in Southeastern Conference play in front of 6,053 at Reed Arena.

The Aggies (14-2, 3-0) held an 18-point lead against Georgia in their SEC opener before seeing it evaporate in the final minute. Against Arkansas at home Saturday, A&M’s 17-point lead dwindled to one point with less than a minute remaining.

Every time the Aggies retreated to their bench Tuesday during a second-half timeout, another player reminded those on the court not to take their foot off the gas pedal.

“I thought in the second half we were much more engaged and played with a lot more energy ... everybody did,” A&M head coach Buzz Williams said.

Ole Miss (9-6, 1-2) presented a unique challenge with its defense. The Rebels, under former A&M head coach Kermit Davis, began defensive possessions in a 1-3-1 zone, transitioned into a 2-3 zone and, if the ball got into the paint, switched to a man-to-man defense. The goal is to protect the paint.

But A&M forward Henry Coleman III had a field day on the baseline. The sophomore netted a game-high 18 points, while pulling down a team-high six rebounds. It was his third straight game scoring in double figures and third-highest total of the season.

His efforts away from the ball opened up space for him to score, Williams said.

“He played good, didn’t he?” William said. “Played really good in regards to what we were trying to do behind the zone, when it was converting from one type to a different one.”

Overall, A&M thrived inside offensively, outscoring Ole Miss 42-24 in the paint. Layups and dunks made up 54% of the Aggies’ offensive output as they hit 14 of 17 layups and 4 of 4 dunks.

“I think we were just in a rhythm tonight,” Coleman said. “I think we’re a team that’s capable of doing that. That’s a hard team to play against, especially with them switching their defenses and you don’t know where another man is coming from. Sometimes you’re getting a double, and sometimes they’re crashing down on you. Credit to everybody who was able to be effective tonight.”

Ole Miss used an early 12-2 run to take a 14-10 lead. The Aggies regained the lead with a steady diet of Coleman baskets. The Rebels pulled within 31-29 on Matthew Murrell’s jumper with 1:01 left in the first half, and they again got within two on Murrell’s 3-pointer with 16:34 left in the second quarter, cutting A&M’s lead to 39-37.

But the Aggies mounted a 14-1 run that all but put away the game with just over 13 minutes left to play. Aggie guard Tyrece Radford scored five of his 12 points during the game-clinching stretch. He also grabbed six rebounds overall.

A&M won its third straight SEC game and seventh overall, a streak that spans back to an 83-73 win at Oregon State on Dec. 18.

Williams said beyond the numbers and on-court execution, A&M’s connectivity as a squad has led to a successful start to SEC play.

“I think the other thing is they like being around one another, and I think the chemistry and camaraderie of who they are ... I think winning helps,” Williams said. “I’m not foolish enough to think we’re going to win every game, but I think there has been some traction since we got back from Christmas, and true confidence can only come from your work, and I think our guys have been working and accountable for their work.”

NOTES — Williams said graduate guard Quenton Jackson played through an illness not related to COVID-19 on Tuesday. Jackson had nine points and three rebounds in 23 minutes off the bench. ... Williams purchased 600 tickets for fans who wanted to come to the game Tuesday. “I should be more engaged,” he said of A&M’s marketing efforts. “That doesn’t necessarily mean financially. I don’t mean that arrogantly, but it means a lot to us, and I do think it helps the ambience of our environment. I think our kids appreciate it.”

In the world of college basketball, data points tend to only mean games that the NCAA tournament selection committee can analyze to make the f…

COLUMBIA, Mo. — A strong second half carried the Texas A&M men’s basketball team to a 67-64 victory over the Missouri Tigers in Southeaste…

In the first 16 games of his college career, Texas A&M guard Wade Taylor IV would like to have just one shot back. It was his first miss m…

A play named “Kevin” has resided unused in Buzz Williams’ playbook for the last nine years, including his stops at Marquette, Virginia Tech an…

Texas A&M guard Manny Obaseki was the gem of the Aggies’ 2021 signing class last year as the 33rd-ranked player nationally. He showed why …

A wild week of upsets led to big changes in the Associated Top 25.