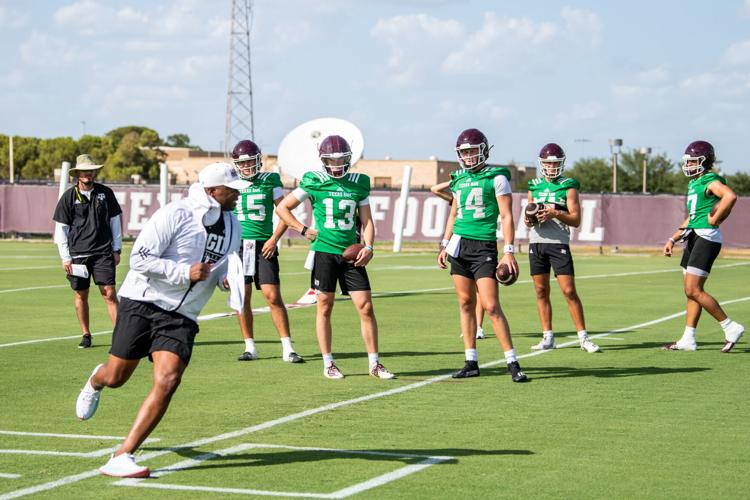 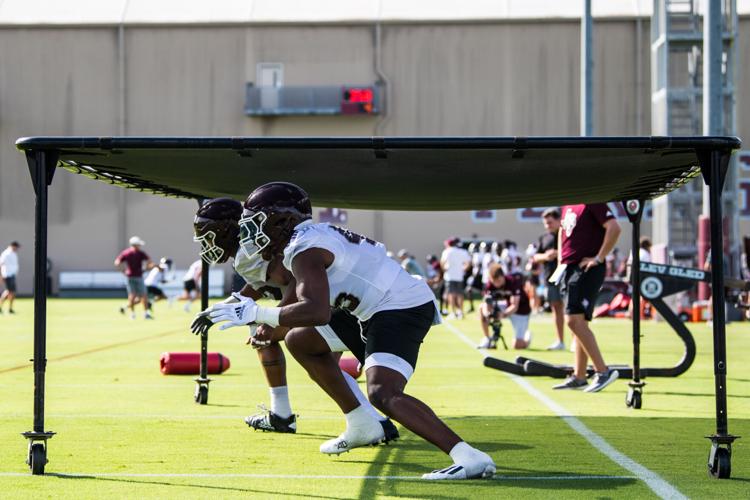 A pair of Texas A&M football players work through a drill during practice Wednesday.

Most were surprised when Texas A&M senior Ainias Smith was arrested on a trio of charges last month. That’s not who they thought Smith was, and it turned out they were right, because the charges were later dropped.

Smith missed a chance to represent himself and A&M at the Southeastern Conference Media Days last month, but he was front and center in the Kyle Field media center a few hours before A&M’s first practice of fall camp late Wednesday afternoon.

“That was a tough little time,” Smith said. “I guess you could say my main thing about that whole situation was just lay low, keep praying and keep faith and let God take over basically.”

Smith was arrested on charges of DWI, possession of less than 2 ounces of marijuana and unlawfully carrying a weapon. The only thing he turned out to be guilty of was poor judgement, because the person in the car confessed to owning the marijuana and gun.

Some had to think Smith was guilty, and possibly some still have doubt of his total innocence.

“I think he came out and explained it,” A&M head coach Jimbo Fisher said. “You tell the truth and you move on and don’t worry about it. You can’t worry about that. You have to go play and do the right things and make the right decisions each and every day.”

Smith was disappointed he didn’t get to attend the SEC Media Days in Atlanta.

“It was a great opportunity to build my brand and get a little bit more exposure for myself,” Smith said. “But now that that’s past, [I’m] not able to worry about that any more, and I’m excited to play ball. I mean, it’s all I got left now.”

Not surprisingly, Smith was the first player to address the media Wednesday.

He leads best by example. The three-star recruit from Sugar Land Dulles came to A&M as a wide receiver. He moved to running back when needed then moved back to receiver. He also returns punts. He’s Fisher’s Swiss Army knife.

“Whatever you need him to do, he can do,” Johnson said. “He’s just a leader overall, and lot of people look up to him, because of how he plays and who he is as a person.”

A&M, which returns 10 starters from an 8-4 team, was picked to finish second behind Alabama in the SEC West during the SEC Media Days.

“I love where we’re at,” said Fisher, who is entering his fifth season at A&M. “I think we’re always in that conversation that we have one of the better teams. And [we] still have a relatively young team, and that’s the exciting thing — very talented and very young. Hopefully we can have a great season this year and more to come.”

Smith is one of only 11 seniors on the roster.

“It takes time to build things the right way in the things you’re doing, and we’re doing it that way, and it’s been very good, and I like where we’re at,” Fisher said.

A&M’s biggest focus in fall camp will be finding a starting quarterback. Junior LSU transfer Max Johnson is battling sophomore Haynes King, who won the job a year ago but suffered a season-ending injury in the second game, handing the job to sophomore Zach Calzada, who has transferred to Auburn.

Fisher joked that ideally he’d have named a starter yesterday.

“I’ve always said don’t put a timetable on it,” Fisher said. “They’ll tell you and the team will tell you. And how they play each and every day will tell you. It’ll be obvious in what you do.”

NOTES — Backup senior linebacker Chris Russell Jr., who was the passenger in Smith’s car, was charged with failing to identify and giving false/fictitious information. Fisher said Russell would be at practice to open camp. ... A&M will have an open practice at 4:30 p.m. Sunday at Kyle Field. Concessions will not be open, but fans can bring bottles of water. ... A&M hopes to have freshman defensive lineman Gabriel Brownlow-Dindy (knee) and freshman defensive back Marquis Groves-Killebrew (knee) practicing by the end of fall camp. Freshman defensive back Bobby Taylor is recovering from surgery he had recently because of an old injury. Junior wide receiver Kenyon Jackson (knee) is rehabilitating. Junior walk-on running back Charles Shelling is recovering from an Achilles tendon injury. ... Redshirt freshman offensive lineman Trey Zuhn III and walk-on redshirt freshman wide receiver Caleb Surber will miss a few days because of COVID-19 protocol. ... Wide receiver Hezekiah Jones and defensive end Donell Harris Jr. have retired because of injuries, taking medical redshirts. ... Redshirt freshman Eli Stowers is back at quarterback after switching to tight end last season.

In less than a decade the College Station football program has state championship and runner-up hardware in the trophy case. Now the Cougars c…

Watch now as The Eagle sports crew discusses what Texas A&M players and coaches had to say at the Aggies' annual preseason media day.

A&M LB Russell, who was Smith's passenger, is arrested

A pair of Texas A&M football players work through a drill during practice Wednesday.