Texas A&M running back Isaiah Spiller, right, catches an 18-yard pass for a touchdown as Colorado linebacker Guy Thomas defends late in the second half Saturday in Denver. 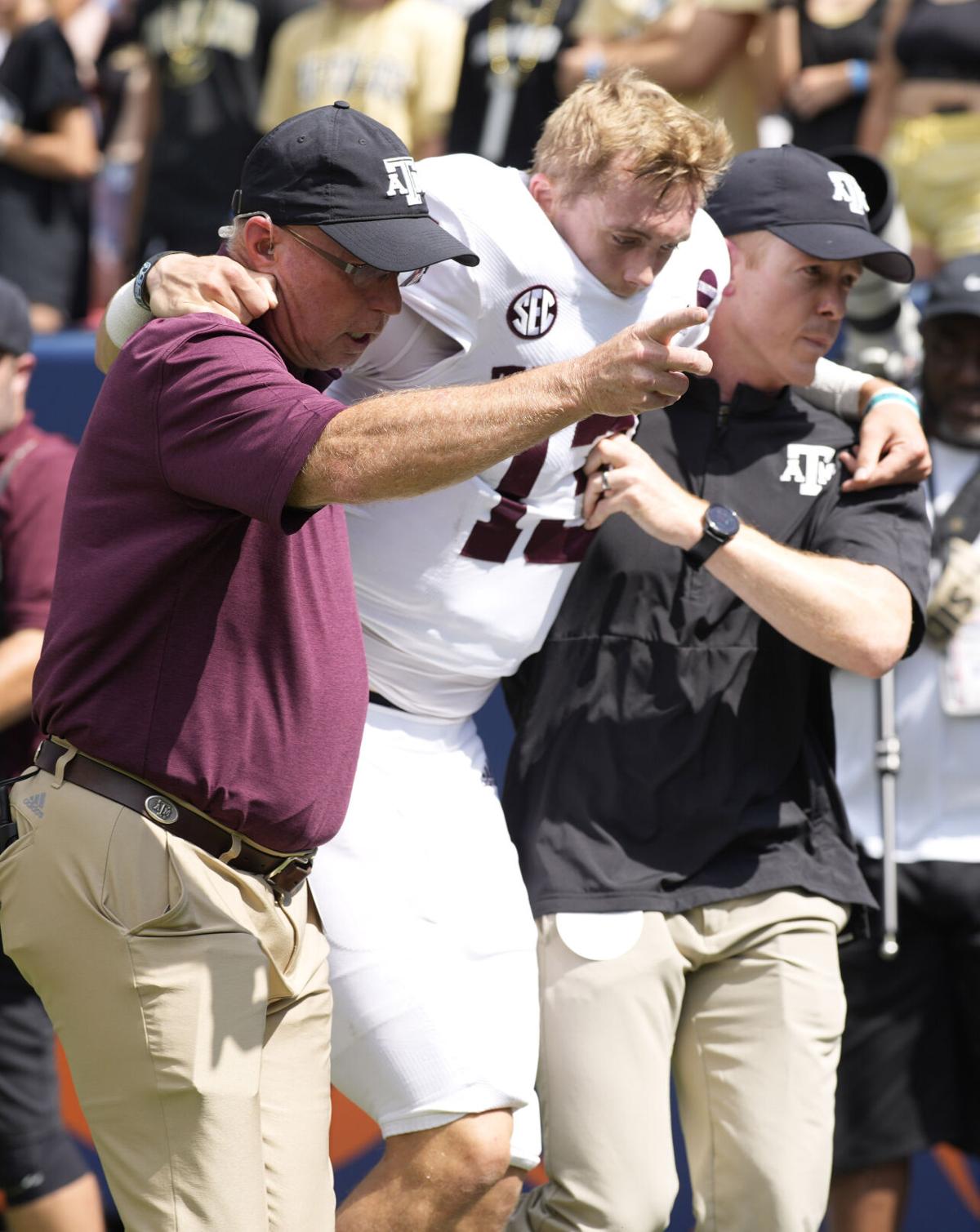 Medical staff help Texas A&M quarterback Haynes King off the field after he suffered an injury during the first half Saturday in Colorado. King played just two series before leaving the game and not returning.

Texas A&M tight end Jalen Wydermyer, left, holds onto the ball while being tackled by Colorado cornerback Christian Gonzalez during the first half Saturday in Denver.

The Aggies’ junior running back took matters into his own hands when he hauled in an over-the-shoulder, go-ahead touchdown pass from backup quarterback Zach Calzada on third-and-9 with 2:41 left. Spiller’s 18-yard catch proved to be the game-winner as fifth-ranked A&M rallied to beat Colorado 10-7 on Saturday afternoon at Empower Field.

A&M’s offense had a frustrating afternoon with Calzada struggling in place of injured starter Haynes King, but the Aggies (2-0) found enough composure to finally pull ahead of the Buffaloes (1-1). After the game, A&M right tackle Kenyon Green took a knee on the field by himself and bowed in prayer. It seemed like a miracle the Aggies found a way to win after the ugliness they endured — and forced upon themselves — for the better part of three and a half quarters.

“At the end of the day, we were able to make one more play than they did, and we kept believing we could do that,” A&M head coach Jimbo Fisher said. “I talk about it all the time. You’re measured on your bad days. Who are you? And today I told our guys today’s judgement day. ... We found out that we’ve got fight and heart, but we’ve got to find out if we can get execution and precision.”

Mountain-sized problems arose for the A&M offense when King left the game after suffering an apparent ankle injury on the Aggies’ second drive.

The redshirt freshman took an option keeper on third down but got twisted around by Colorado defensive end Guy Thomas and fell hard to the ground. He hobbled across the field and was taken to the locker room by trainers, eventually unable to put any weight on his right leg. King returned to the sideline in the second quarter on crutches wearing street clothes and a protective boot on his injured foot.

A&M officials said he would be evaluated in College Station and offered no official injury update after the game.

Calzada entered but was out of sync for most of the game. The Aggies punted seven times and didn’t gain a first down until less than two minutes in the second quarter on a Devon Achane 15-yard run. The rush gave A&M a small spark, though, as the Aggies drove in range to make a 41-yard field goal with 25 seconds left in the period, cutting Colorado’s lead to 7-3 at halftime.

Fisher said at halftime he told Calzada to keep his poise, rely on his fundamentals and continue to stand in the pocket while slowing down his reads.

“Sometimes you get thrown in there ,and things get going too fast,” Fisher said. “He has guys open, and he misses them as I call ‘flash read.’ ... What I call ‘flash reading’ is you see it, but you’re going through it too quick.”

Calzada finished 18-of-38 passing for 183 yards. He started just 10 of 25 but completed 8 of 13 attempts in the fourth quarter for 118 yards. His last throw was his best: the touchdown pass to Spiller.

“We all kept a positive vibe,” Spiller said. “Nobody pointed fingers, because we don’t do that. That’s not the standard, and we all just wanted to win. Zach got comfortable towards the end of the game. I think Zach’s going to be really good for us down the line. He’s going to get more comfortable with more practice time, so we’re going to be ready.”

A&M’s defense struggled to contain Colorado’s running attack in the first half. The Buffaloes mixed up schemes to keep the Aggies guessing, which then opened up play-action passes. A trio of Texans — quarterback Brendon Lewis and running backs Jarek Broussard and Alex Fontenot — combined to rush for 139 yards, and the Buffs scored first on Broussard’s 2-yard run with 2:24 left in the first quarter to take a 7-0 lead.

The Aggies adjusted well in the second half. Colorado didn’t cross midfield again and managed just 54 total yards in the second half, gaining only one first down while punting five times. A&M needed one more stop after its go-ahead touchdown in the fourth quarter, and the Aggies delivered by holding Colorado on downs with 1:40 to play.

“It felt good as a defense being able to stand tall and have our offense’s backs all game,” A&M defensive end DeMarvin Leal said. “It’s a big win. It showed a lot ... how even though it wasn’t the game we expected, we came out on top and we came out on top together.”

While happy with the win, Fisher said A&M has a number of issues to fix — and fix fast — before hosting New Mexico at 11 a.m. next Saturday at Kyle Field.

“We’ve got to dot Is, cross Ts and understand the urgency,” Fisher said. “Everybody’s trying to make a name for themselves. You get ranked, which I hate all of that. That ranking stuff don’t mean diddly to me, but we were supposed to be a good football team, so people are going to mark it, and you’ve got to understand the burden that carries and how you prepare and how you compete each and every week. You’re going to get everyone’s A game right down to the end, and we’ve got to do a better job, and I have to do a better job coaching.”

BATON ROUGE, La. — The Southeastern Conference football series between Texas A&M and LSU always has a flair for the dramatic.

Cessna: Texas A&M fails to take advantage of another opportunity

It’s been a frustrating few months for the Texas A&M football team. The victory over Alabama was great, but that was the expectation for t…

BATON ROUGE, La. — Trailing by 3 with just 20 seconds left and 75 yards from the end zone, 15th-ranked Texas A&M needed some big plays to …

The Texas A&M football team landed a commitment from 2022 wide receiver Evan Stewart on Monday night, according to a post from Stewart on …

Six years ago, LSU rallied from a halftime deficit for a 19-7 victory over Texas A&M, saving the job of head football coach Les Miles as h…

Texas A&M running back Isaiah Spiller, right, catches an 18-yard pass for a touchdown as Colorado linebacker Guy Thomas defends late in the second half Saturday in Denver.

Medical staff help Texas A&M quarterback Haynes King off the field after he suffered an injury during the first half Saturday in Colorado. King played just two series before leaving the game and not returning.

Texas A&M tight end Jalen Wydermyer, left, holds onto the ball while being tackled by Colorado cornerback Christian Gonzalez during the first half Saturday in Denver.