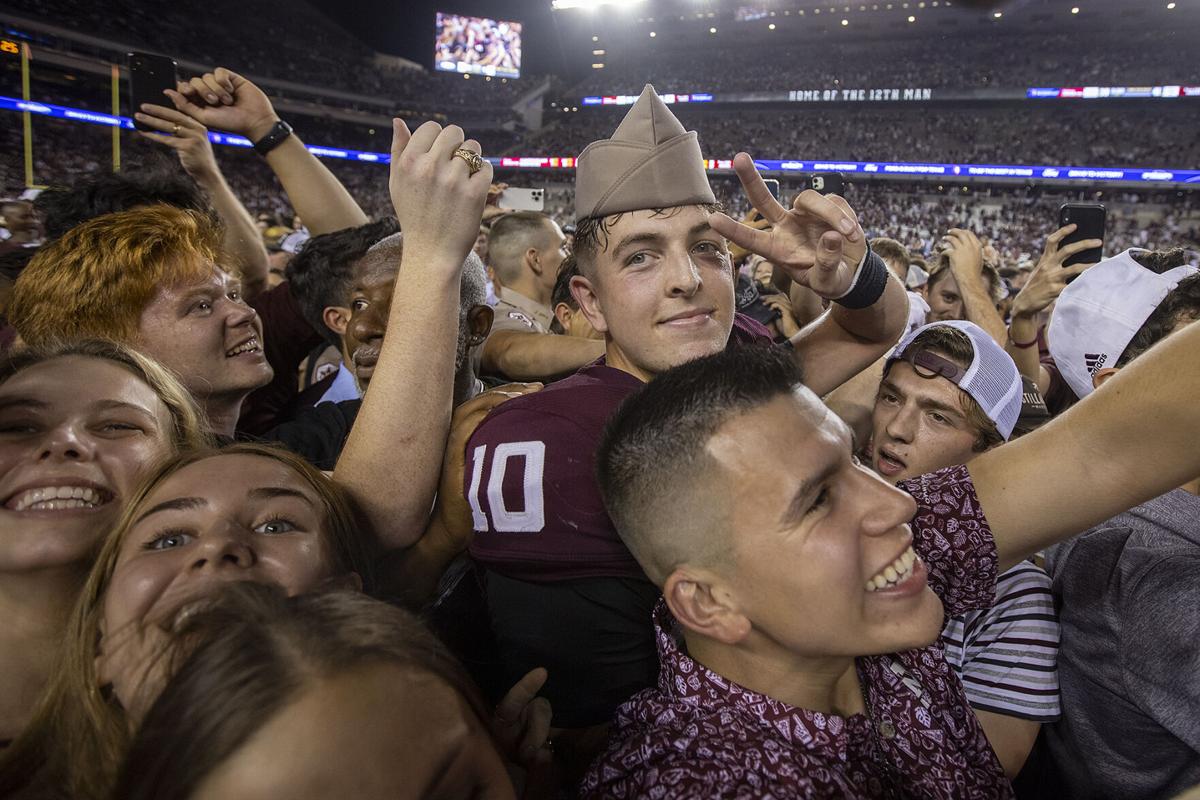 Texas A&M quarterback Zach Calzada exits the field while surrounded by fans after defeating Alabama at Kyle Field on Saturday. 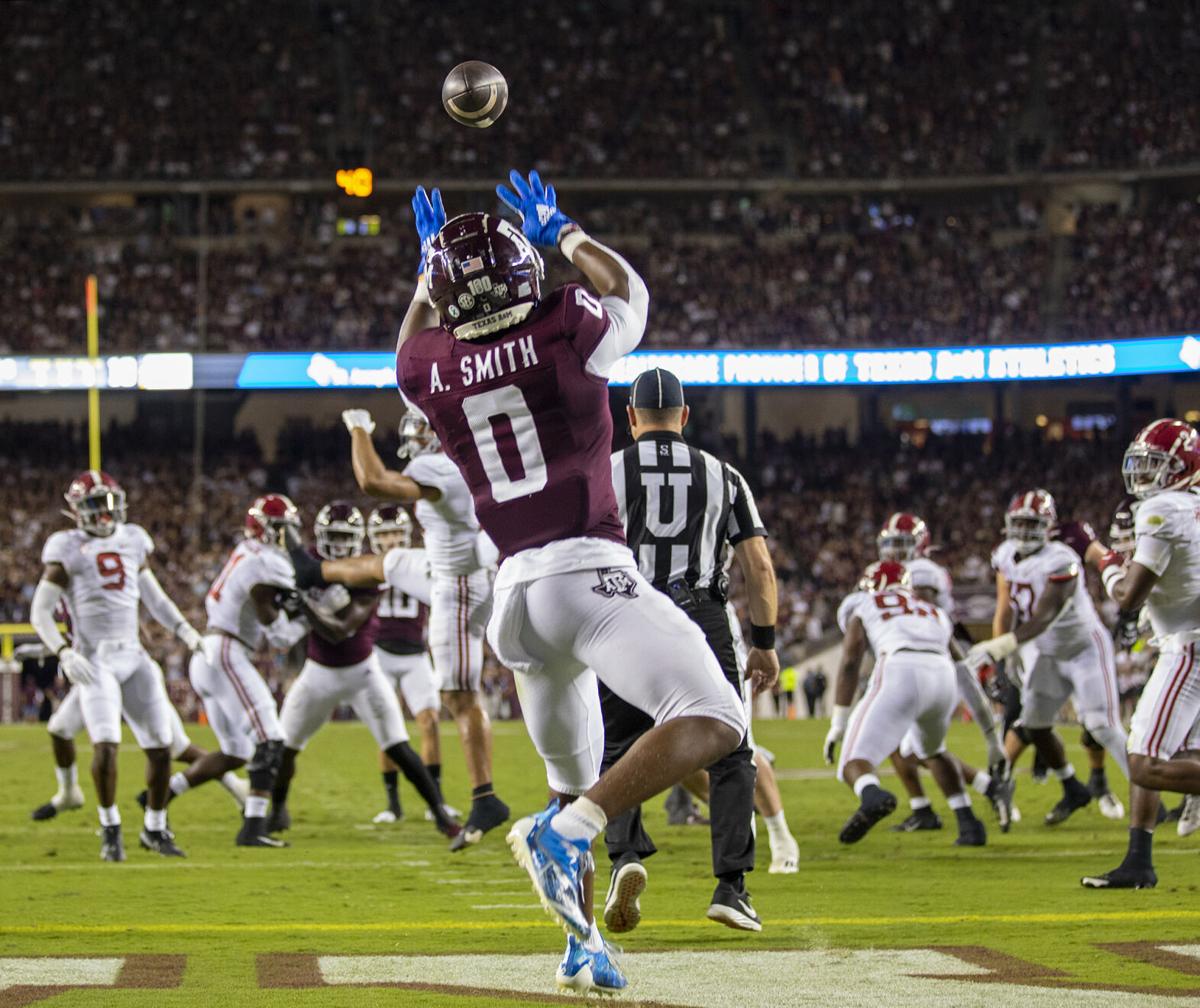 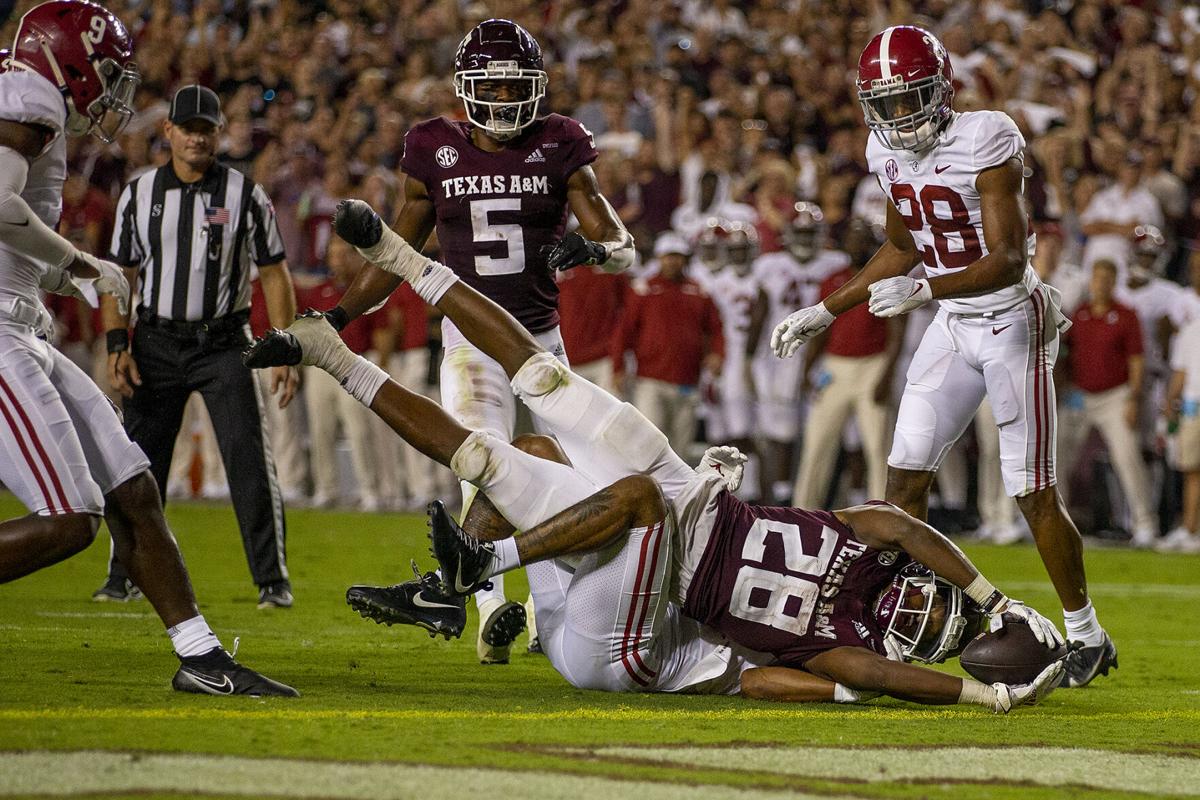 As fans poured over the railings of Kyle Field when Seth Small’s 28-yard field goal sailed through the uprights giving the Aggies a 41-38 win over No. 1 Alabama, the 12th Man engulfed sophomore quarterback Zach Calzada.

In the Generation Z version of carrying a player off the field, Calzada posed for selfies as the ameba of humanity that was part of the 106,815 crowd — second highest in Kyle Field history — pushed him across the field.

It was a stark contrast from the week prior, when a late-game safety taken by Calzada iced Mississippi State’s win over the Aggies, handing A&M its second loss of the season and knocking the one-time top 10 team out of the rankings altogether. After that performance, Calzada left the field alone with tears in his eyes.

“He was very different,” running back Devon Achane said. “He just went back to practice and worked on the things that he needed to get better at. We been knowing what he can do. He just came out today and showed his abilities to the 12th Man.”

To head coach Jimbo Fisher, his quarterback grew up in a week’s time.

Calzada completed 21 of 31 passes for 285 yards and three touchdowns and became just the second Aggie quarterback to beat Alabama (5-1, 2-1 in SEC) since A&M (4-2, 1-2 in SEC) joined the Southeastern Conference in 2012. He did it by putting together two brilliant drives in the fourth quarter.

“It doesn’t mean anything to me, and I don’t mean that in any disrespect, because he’s one heck of a coach,” Fisher said. “I’ve known Nick for years and consider him a great friend and have coached with him and he has great teams. The thing that means something to me is that our football team is learning to play against other good football teams and have success.”

Trailing 38-31 with five minutes left in the fourth quarter, Calzada completed 4 of 5 passes for 61 yards as he led A&M on a 65-yard game-tying drive. Calzada took a hard shot to his left knee after he released the 25-yard touchdown pass to Ainias Smith, crumpling to the turf.

Though walk-on backup Blake Bost was warming up on the sideline, Calzada met with Fisher as the Aggie defense got off the field with 2:08 left. He took the field to rumbling approval from the fans.

Calzada completed 2 of 4 passes on the final drive and picked up a vital first down with an 11-yard scramble. His well-thrown jump ball near the end of the drive drew a pass interference penalty that moved A&M to the Alabama 12-yard line and set up the game-winning chip shot for Small, or “Mr. Consistency,” as Fisher referred to him.

“We made plays at critical times in the game,” Fisher said. “Had a great two-minute drive. We worked two-minute to death. Zach getting back off the canvas [after] taking a hit right there.”

Calzada began the game with a newfound confidence, going 10 for 10 for 123 yards and two touchdowns. He helped push the Aggies to a 17-7 lead at the end of the quarter, which broke Alabama’s streak of not trailing after 58 straight quarters. The streak spanned back to Oct. 17, 2020, when Georgia led the Crimson Tide 17-10 after the first quarter.

Down 7-3, A&M drove 75 yards in three plays with Calzada connecting twice with tight end Jalen Wydermyer for 61 yards. Forced out of the pocket to the right, Calzada found Wydermyer wide open just outside the goal line for a 27-yard touchdown pass and a 10-7 lead.

The Aggies then recovered an Alabama fumble on the Crimson Tide 41 and mounted a seven-play drive that ended in a 6-yard touchdown pass from Calzada to Smith. Six consecutive rushes by the Aggies set up the play-action pass, which left Smith wide open in the end zone.

A&M closed out the half with a 24-10 lead thanks to a 15-yard touchdown run by Isaiah Spiller.

Counter to the rest of the first half, A&M’s defense couldn’t get Alabama off the field on the Crimson Tide’s first drive of the game. Alabama faced third down three times on distances of 2, 8 and 3 yards and converted each. Bryce Young ended the drive with a 20-yard TD pass to running back Roydell Williams in the flat with an open lane all the way to the end zone.

Alabama finished the first half converting 4 of 9 third downs.

Midway through the third quarter, Alabama began a frantic sequence of plays by going after punter Nic Constantinou and blocking his punt attempt right after the ball left his hands. Alabama’s King Mwikuta fell on the ball in the A&M end zone after the block by Ja’Corey Brooks to cut A&M’s lead to 24-17.

A&M struck back with a 96-yard kickoff return by Devon Achane, pushing Alabama’s deficit back to two touchdowns. Fisher said, with a chuckle, that Achane was “off the chain.”

“I couldn’t believe it,” Achane said. “The hole was so big. It was just like, ‘Is this for me?’ It was just so amazing and the feeling after that on scoring that, it was just amazing for me.”

As A&M’s offense hit a lull, Alabama rattled off four straight scores, including two touchdown passes from Young and two field goals by Will Reichard.

Young, a Heisman Trophy favorite, completed 28 of 48 passes for 369 yards and three touchdowns. Running back Brian Robinson Jr.,  picked up 147 yards on 24 carries as the Crimson Tide had 522 yards of offense.

“I thought our defense was outstanding,” Fisher said. “Even though they gave up yards, they had some outstanding ‑‑ four straight trips right there that either they missed ‑‑ got a field goal, got an interception in the red zone. Even though, we didn't let them have touchdowns.”

A&M gained 379 yards, with 94 coming on the ground. Spiller led the charge with 46 yards and the TD on 17 carries. Achane picked up 34 on seven carries.

The future appears to be in the hands of Calzada, after CBS reported that season-opening starter Haynes King is unlikely to return to play this season after suffering a broken tibia in the Aggies win in Colorado. His teammates said they hope the 12th Man continues too see the growth he’s made in three short weeks.

“Zack’s first day on campus looks much different than how he looks now,” Small said.

“Zach is a guy who’s going to get up off the mat and keep fighting,” he continued. “He knows that he didn’t play to the best of his ability the past couple of weeks, but he was determined and each week got better and continued to lead this team the way that he did. Just really impressed with him and his character shows tonight.”

COLUMBIA, Mo. -- Texas A&M head coach Jimbo Fisher told ESPN at halftime of the No. 21 Aggies’ 35-14 win over Missouri that his team left …

Texas A&M showed why it was a preseason top 10 team in Saturday’s 41-38 upset of top-ranked Alabama. The Aggies’ four preseason All-Americ…

COLUMBIA, Mo. — Texas A&M had control over Missouri from start to finish in the Aggies’ 35-14 win on Saturday afternoon at Faurot Field, b…

COLUMBIA, Mo. — No. 21 Texas A&M’s 35-14 victory over Missouri at times wasn’t pretty Saturday, but it was darn effective.

Turns out all those Aggie fans who circled Oct. 9 on their calendars knew what they doing.

COLUMBIA, Mo. — There was little post-Alabama lull for the 21st-ranked Texas A&M football team on Saturday as the Aggies beat Missouri 35-…

Texas A&M quarterback Zach Calzada exits the field while surrounded by fans after defeating Alabama at Kyle Field on Saturday.