Arkansas quarterback KJ Jefferson (1) runs the ball as the Texas A&M defense gives chase during the Southwest Classic on Sept. 25, 2021, at AT&T Stadium in Arlington. 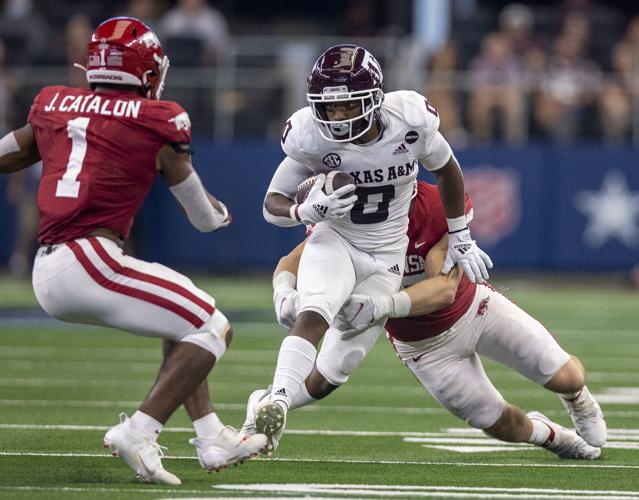 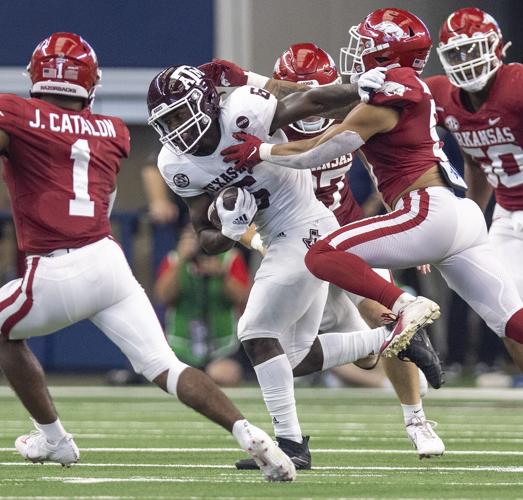 Considering the stakes, it’s somewhat fitting the 23rd-ranked Texas A&M and 10th-ranked Arkansas football teams will be playing at a neutral site in a bowl-type atmosphere at 6 p.m. Saturday at AT&T Stadium in Arlington.

Even though it’s just the Southeastern Conference opener, the winner will take a huge step toward earning a berth in a New Year’s Day bowl game and becoming the top challenger to second-ranked Alabama in the SEC Western Division.

The Aggies (2-1) were considered the SEC’s third-best team behind Alabama and defending national champion Georgia when the season began — a projection they earned based on their victory over the Crimson Tide last season and an incoming top-ranked recruiting class that joined three straight top 10 classes. But A&M has struggled thus far, including a 17-14 loss to unranked Appalachian State. The Aggies’ season goals remain within reach, but after failing to play well at Kyle Field in their first three games, they now must play four conference games away from College Station.

In his first four seasons at A&M, Fisher is 10-9 in SEC games away from Kyle Field. That included two straight victories over Arkansas in the Southwest Classic, but the Razorbacks ended a nine-game losing streak in the series last year with a 20-10 victory.

“It felt really good,” Arkansas head coach Sam Pittman said. “I think it was really important to us because we had been fortunate enough to beat Texas and then come back and beat Texas A&M. I felt like it would do something for us on a national [level], and I knew it would help us in recruiting in Texas. It was a CBS game, a 2:30 p.m. game, and I felt like it would help us in recruiting. It felt awful good. I thought it was an important game for us to have as a win.”

This year’s Southwest Classic is on ESPN, and a victory could be even bigger for the Razorbacks, giving them momentum heading into next week’s showdown at home against Alabama. The Crimson Tide has beaten Arkansas 15 straight times, but last year’s 42-35 win was the closest game in the series in seven years.

Arkansas has a veteran team. The Razorbacks are expected to start all upperclassmen, except for sophomore running back Raheim Sanders.

“They’ve got a veteran team,” Fisher said. “They’ve got an older team. Those guys have been around a long time, and I say that makes a difference. They are talented, schooled and well-coached.”

Experience is one of A&M’s shortcomings. The Aggies started one senior on offense against Miami last week and two more on defense. A&M had 12 starters who had combined for a mere 20 career starts.

LSU junior transfer Max Johnson gave the team a lift last week by replacing sophomore Haynes King at quarterback. Johnson completed 10 of 20 passes for 140 yards and a touchdown, had four runs of at least 8 yards and didn’t commit a turnover.

Johnson, the son of former NFL quarterback Brad Johnson who won a Super Bowl with Tampa Bay, was the only player the Aggies added through the NCAA transfer portal during the offseason.

Johnson was 8-6 as a starter at LSU, including a 16-13 overtime loss against Arkansas last year in which he played only the first two possessions before getting benched. Johnson bounced back to win the last two games of the regular season, leading LSU to a 27-24 victory over A&M before opting to transfer and eventually coming to A&M along with his younger brother, freshman tight end Jake Johnson.

“I’m super blessed to be here,” Max Johnson said. “I enjoyed my time at LSU, but that time is gone. I love playing with these guys. The main part was it was just a business decision, and I wanted to be surrounded by great players and a chance to win, and A&M is the best place to be.”

ARLINGTON — There was excitement in the Texas A&M locker room after the 23rd-ranked Aggies downed No. 10 Arkansas 23-21 at AT&T Stadiu…

ARLINGTON — In another dramatic edition of the Southwest Classic, the 23rd-ranked Texas A&M football team needed every bounce and positive…

When quarterback Max Johnson entered his name in the NCAA transfer portal, it didn’t take long for seven or eight schools to reach out to him,…

ARLINGTON — Antonio Johnson heard the crowd go wild. Texas A&M’s defensive back was on the field but couldn’t see what happened. He just k…

Arkansas quarterback KJ Jefferson (1) runs the ball as the Texas A&M defense gives chase during the Southwest Classic on Sept. 25, 2021, at AT&T Stadium in Arlington.