Monday Night Football: Scores and updates from Saints vs. Buccaneers 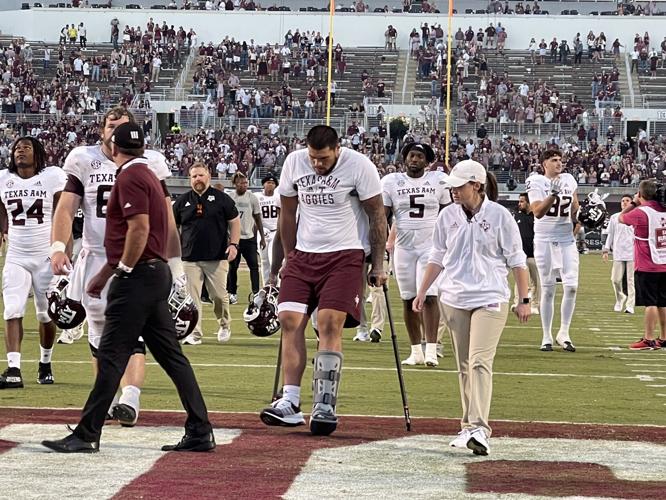 It’s uncertain who will start at quarterback for Texas A&M’s struggling offense, but it’s certain he’ll have a daunting task against top-ranked Alabama, which has one of the nation’s best defenses.

A&M junior quarterback Max Johnson, who brought stability to the inexperienced unit, injured the thumb on his throwing hand in last week’s 42-24 loss at Mississippi State.

King has been plagued by turnovers while Weigman, a five-star recruit from Cypress Bridgeland, has yet to play.

King who started the first two games before being benched, was 6-of-13 passing against Mississippi State for 49 yards and added two carries for 14 yards, including a touchdown. But he also threw a pair of interceptions.

“I thought it was a pretty good throw,” Fisher said of King’s first interception. “He was hit as he threw [on the second interception]. His decision-making was good. Unfortunately, he had a couple breaks where the ball tipped the wrong way. He was doing the right things.”

Many fans are eager to see Weigman who gets repetitions in practice every week with the second unit.

“He’s knowledgeable,” Fisher said. “He’s really progressing, he understands everything we’re doing and how we’re doing it. He’s getting better and better and I think he’s going to be a very good player.”

Johnson, the transfer from LSU, replaced King after the loss to Appalachian State and led A&M to victories over Miami and Arkansas. A&M didn’t have a turnover in those games, but the Aggies had a season-high four against Mississippi State.

Alabama is lousy when it comes to turnover margin, ranking 91st in the country at -0.40, which ties it with A&M. But the Crimson Tide gives up yards and points begrudgingly.

Alabama is allowing only 236.4 yards to rank fourth in the country and allows 11 points per game, which ranks fifth.

A&M ranks 105th in total offense (335 ypg) and 108th in scoring offense (21.8 ppg) and that’s playing against somewhat pedestrian defenses. A&M had played only one opponent that ranks in the top 40 in total defense (Mississippi State at No. 37).

Alabama is a game the Aggies could use Johnson who is 10-7 as a starter, but it will be King or Weigman if Johnson is unable to go.

“They’ll compete every day, the best player will play,” Fisher said. “Conner can play, we could put him in right now. He would be very comfortable.”

Texas A&M’s victory over LSU ended talk of buying out Jimbo Fisher, which was a reach since it would cost approximately $86 million. Add i…

The Texas A&M women's basketball game against Morgan State on Sunday at 2 p.m. has been canceled due to health issues within the Morgan St…

How Texas A&M coordinates its flyovers before home football games

Lt. Col. Morgan Smyth had what he called a once-in-a-lifetime opportunity earlier this fall as his Marine Corps career nears an end: leading a…

Just when you thought you had the Texas A&M football team figured out, think again.

People can't get over Jude Bellingham’s performance against Senegal

People can't get over Jude Bellingham’s performance against Senegal