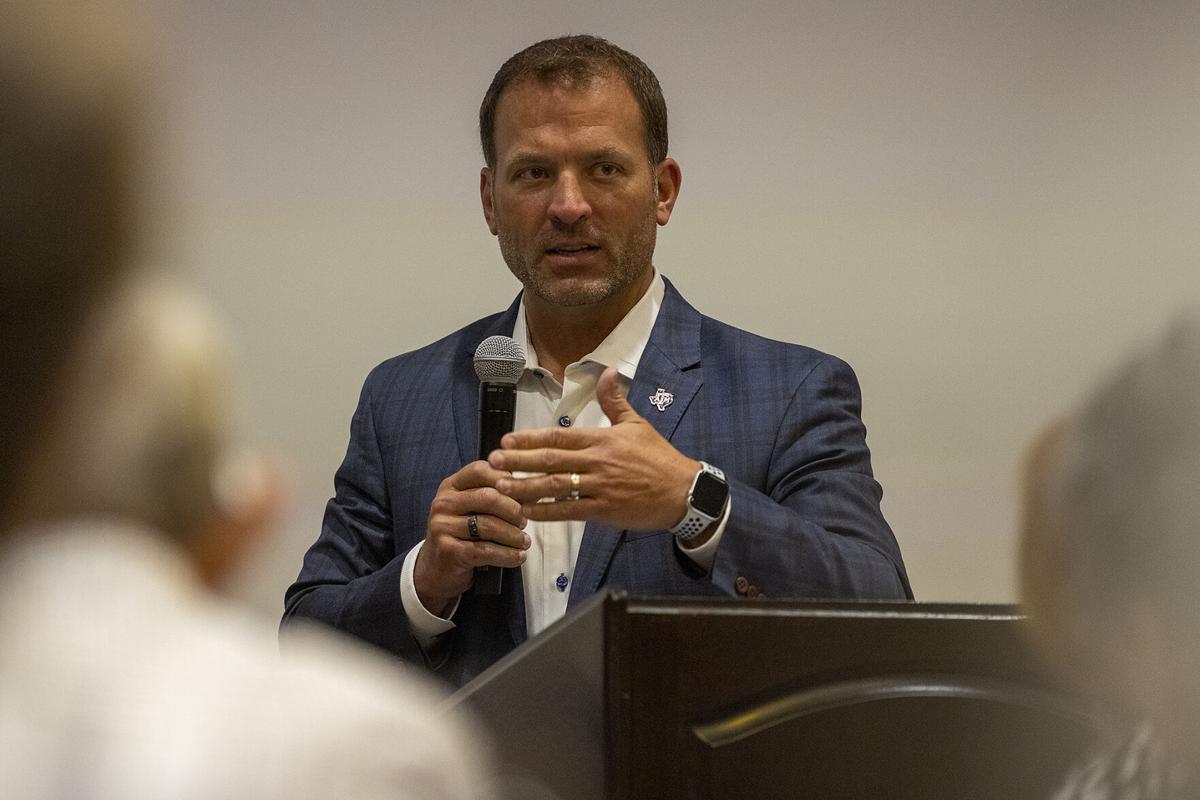 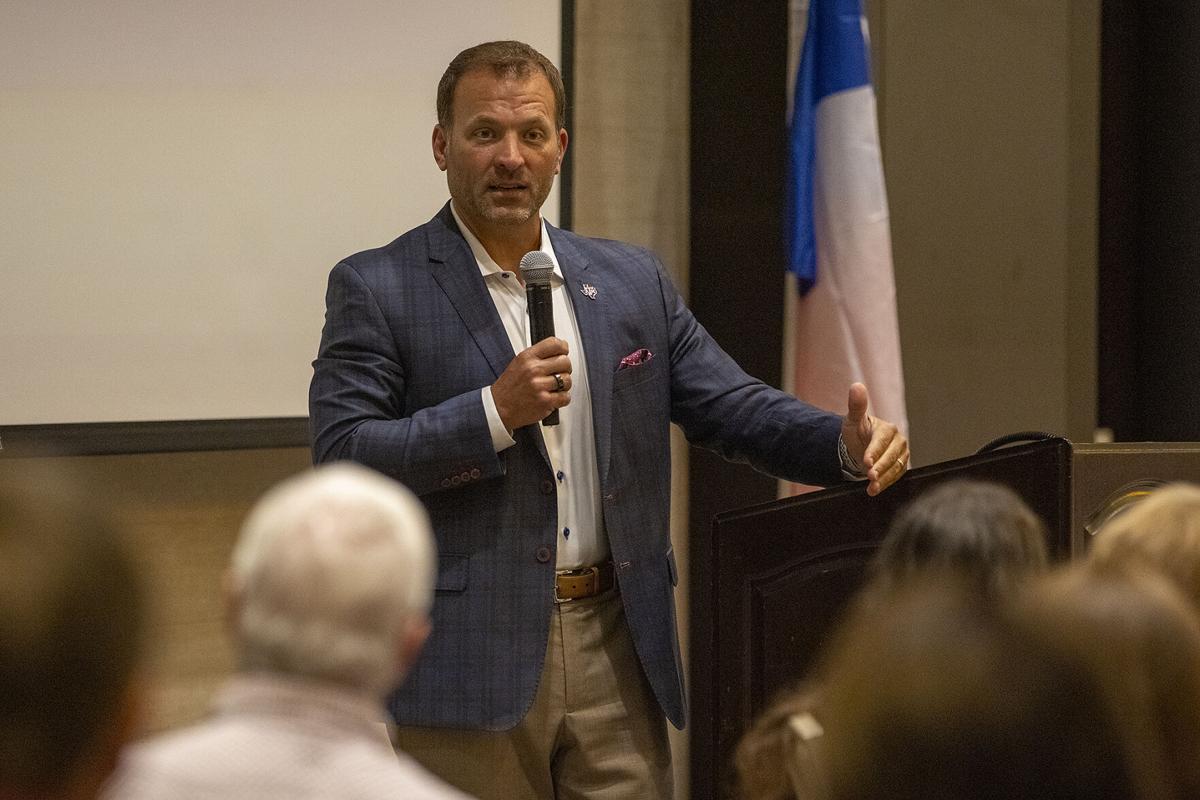 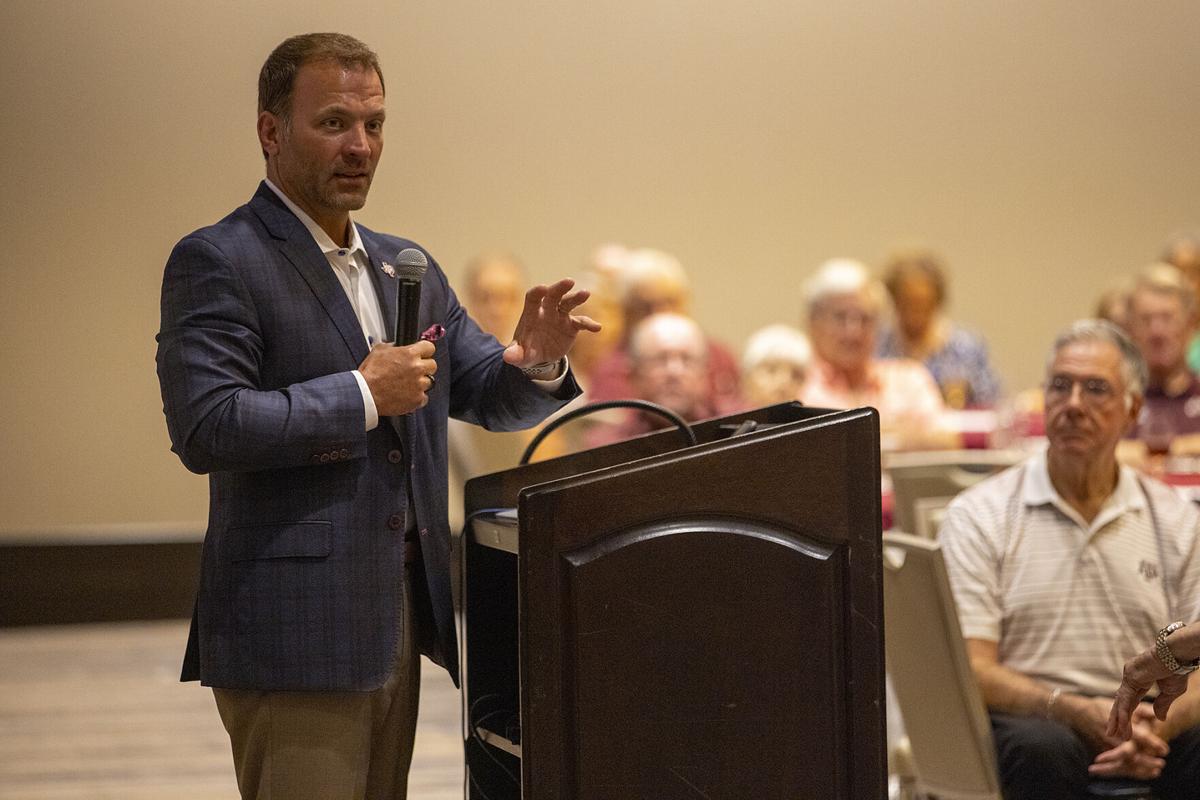 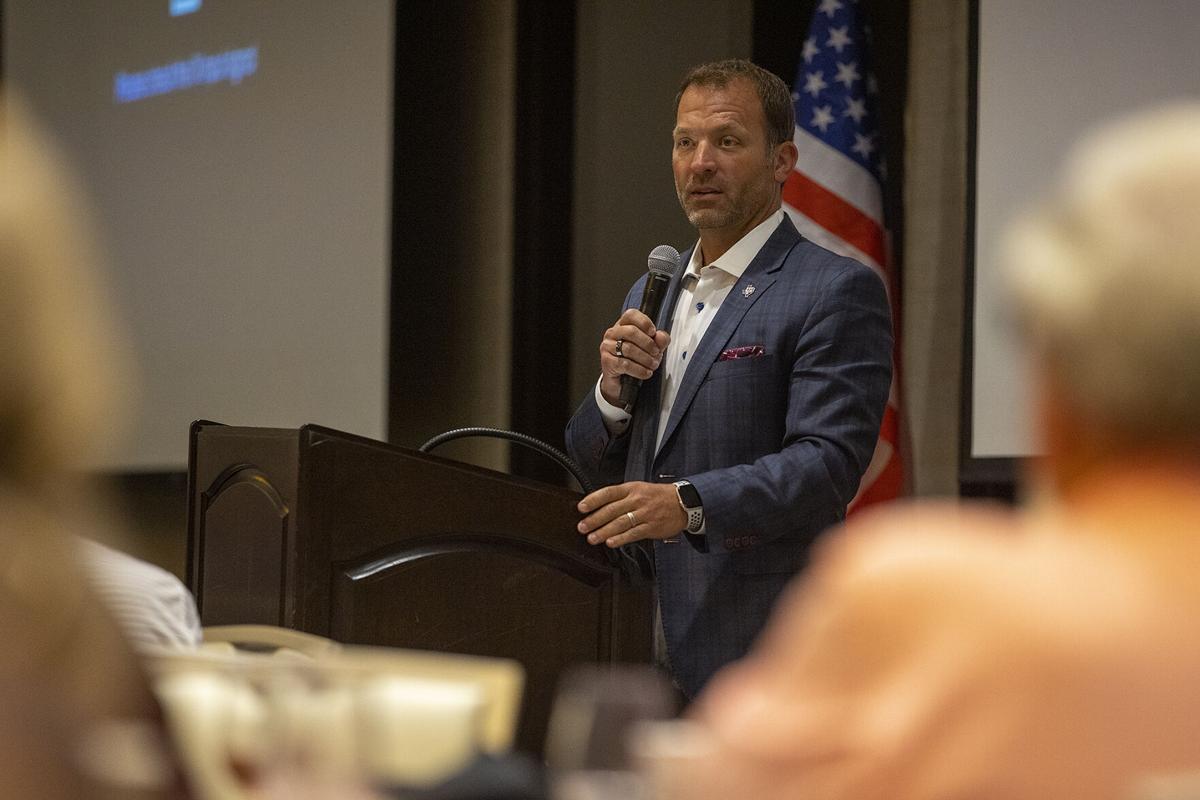 College sports venues are dormant, but there’s plenty happening off the field.

College athletes are two weeks into having the opportunity to earn money through name, image and likeness (NIL) deals, and there’s talk of the College Football Playoff expanding to 12 teams as the sport prepares for a season with COVID-19 in the rear-view mirror.

“It’s the most transformative time in our history,” Texas A&M athletics director Ross Bjork said Tuesday at the Brazos County A&M Club’s monthly luncheon at Embassy Suites. “Think about all the things that are happening right now.”

The NCAA recently ruled that athletes in all sports could transfer once without having to sit out a season. The Supreme Court also recently sided with college athletes in the case of NCAA v. Alston, allowing them to receive cash for academic awards.

“We have to adapt to that, and we’re figuring out what all that means as we move ahead,” Bjork said. “So the most transformative time in the history of college athletics is right here. We can either choose to really embrace it, to run towards it and say, ‘A&M can be a leader.’ We can be a leader in name, image and likeness. We can be a leader in academic awards and whatever.”

Bjork said the school has embraced those challenges and has the resources and leadership to be successful in everything, not just sports.

Bjork said A&M’s chances of being successful are increased by a great team effort, praising the contributions by new president Katherine Banks who has fit in nicely.

Tuesday’s crowd of 109 was the organization’s largest for a luncheon since well before the COVID-19 pandemic began, Brazos County A&M Club president Robert Palmarez said. It was a welcome sight for Bjork, who said a year ago many people were asking why colleges were playing sports during a pandemic.

“We played college sports because of the young people, period,” Bjork said. “Whether that’s altruistic or whatever, that’s my viewpoint.”

Bjork offered place-kicker Seth Small’s game-winning field goal against Florida last fall and Jordan Nixon’s buzzer-beating shot to beat Iowa State in overtime of the NCAA women’s basketball tournament in March as examples of why they played after returning from COVID-19.

“The reason we play is because young people came to Texas A&M to get a degree and play at the highest level,” Bjork said. “Now it was our job to make it as safe as possible, to have the protocols, to have the best health care, to do hard screening, to do testing, to do all the things that we did. As long as we could make it as safe as possible, they wanted to play, but we actually had to answer that question.”

Bjork just passed his two-year anniversary at A&M on July 8. The first eight months were pretty much business as normal, but then came COVID-19, social unrest and a polar vortex that caused power outages.

“All those things happened in the past 16 months, so I am so glad that 2020 is over with, so that we can move forward in a positive way,” Bjork said.

The crowd watched a short video highlighting all the sports seasons before Bjork spoke. A&M finished 19th in the Learfield IMG Directors’ Cup for its 14th straight top 20 finish. Texas won the Directors’ Cup, which awards points based on finishes in NCAA championships by a maximum of 19 sports, four of which must be baseball, men’s basketball, women’s basketball and women’s volleyball.

“What that tells you is we have a great foundation, but we have work to do,” Bjork said. “We recognize that.”

“We have high expectations here,” Bjork said. “We want to be in the national championship picture. We want to win those SEC championships, and if you’re in the top three in the SEC, then you’re a top 10 program in the country.”

NOTES — Bjork said players being paid for NIL rights is “an evolution of college sports and is what we need to provide for our student-athletes.” He’s unsure how it will affect recruiting. “Are there people out there that want Aggies to win, and they’re willing to say, if you come to my business and make an appearance, I’ll pay you X amount?” Bjork said. “Absolutely. We’re going to see that happen. As long as they follow the state law, then it’s permissible.” The state law includes a morality clause, Bjork said. A&M athletes’ NIL contracts are examined by the athletics department to make sure they follow state laws. ... Bjork said approximately 24 student-athletes have handed in NIL contracts so far. ... Bjork asked the crowd to continue to pray for retired A&M football coach R.C. Slocum as he battles Hodgkin lymphoma. “I’ve been texting and talking to him, and he’s energized. He’s inspired by all the support,” Bjork said. ... A&M football season ticket sales are at where they were in 2019 at this time with student ticket sales ahead of pace, Bjork said. ... The Brazos County A&M Club’s Coach’s Night in May, raised approximately $130,000 for scholarships, Palmarez said.