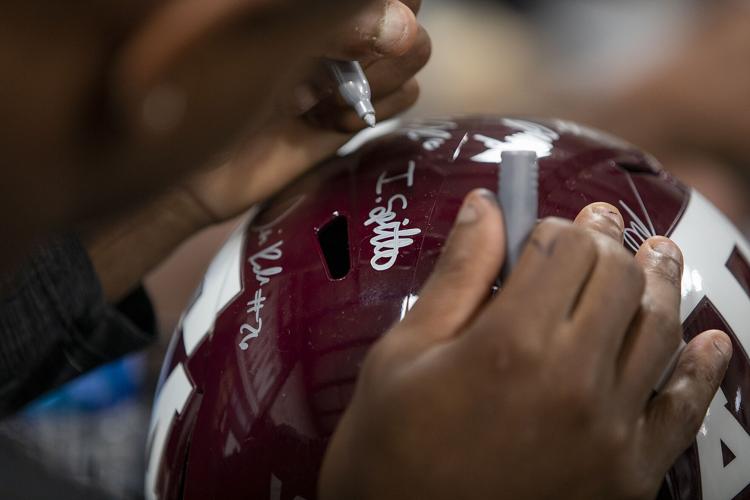 Texas A&M running back Isaiah Spiller signs a helmet during an autograph signing event at C.C. Creations on Oct. 30, 2021. 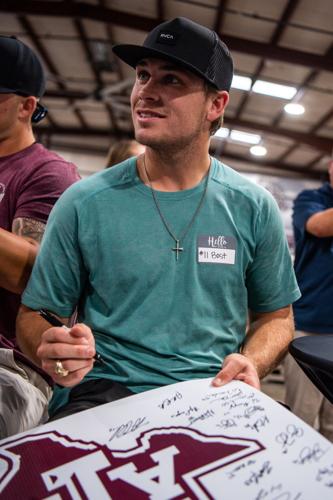 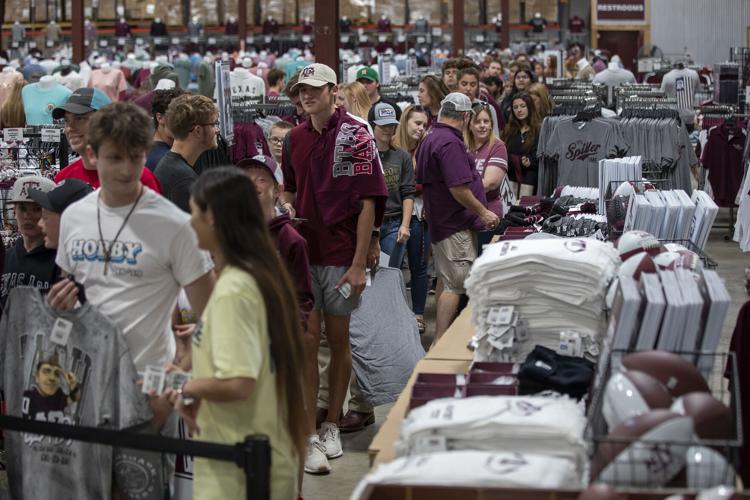 Fans wait in line during an autograph signing event featuring the Texas A&M football team at C.C. Creations on Oct. 30, 2021. 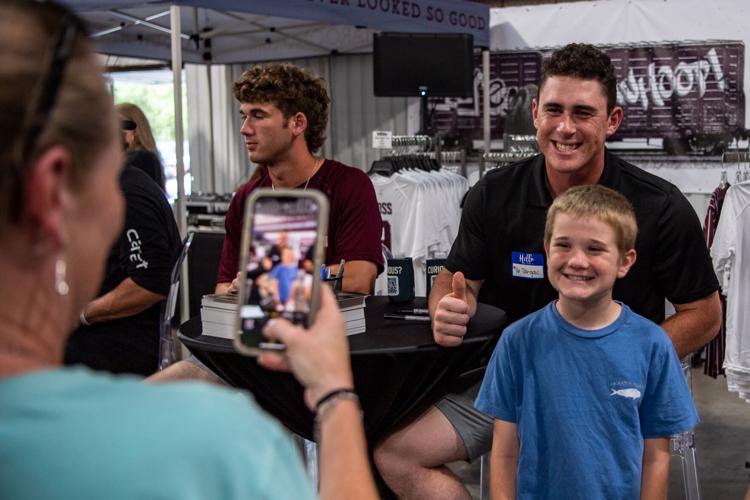 Beginning on July 1 last year, college athletes in Texas took to social media to peddle their “brand” for some extra pocket money, letting businesses know that they open for deals. That day Texas Senate Bill 1385 took effect, legislatively firing up the engine that is name, image and likeness (NIL) compensation for student-athletes across the state.

Fast forward a year and almost every Power Five conference program in the country has a limited liability company managing NIL rights for its athletes worth reported millions of dollars, while head coaches have been taking verbal shots at each other on the legality of their players’ deals.

The disjoined way in which NIL has been installed has created questions of its future sustainability. For now those questions will continue to be answered at the state level.

Texas Lt. Gov. Dan Patrick placed the state’s NIL bill on a legislative monitoring charge while the state legislature is out of session. The charge asks that the Senate Higher Education Committee look at the implementation of the legislation and make recommendations for improvements or enhancements.

Sen. Charles Schwertner (R-District 5), who represents the Bryan-College Station area, was a co-sponsor of the NIL bill. For him, it was necessary to keep the state of Texas in the mix for championships.

“It’s about competitiveness and maintaining that,” Schwertner said. “Football is important in Texas. In addition, it’s fairness to those athletes. To allow laws for students to receive compensation for their name, image and likeness, I think it’s appropriate and right that we pass a law that is fair and appropriate for those student athletes.”

Sen. Royce West (D-District 23), the vice-chair of the Senate Higher Education Committee, focused on putting some of the power into the hands of the student-athletes who make money for the NCAA and their respective athletics departments.

“We know that there’s exploitation going on, and so from that vantage point, I wanted to make certain that the young people had the opportunity to participate in the revenue sharing that’s taking place in college athletics,” West said.

So far 29 states have passed NIL laws, most of which were reactionary to California’s Fair Pay to Play Act. Student-athletes in states that do not have a law on the books are governed by NCAA guidance on NIL that also went into effect on July 1 last year. Generally speaking, that guidance gives college athletes the ability to profit from NIL, allows them the right to use an agent or attorney for NIL-related activities and requires them to report NIL contracts with their university, all three aspects codified in the Texas law.

While many of the states’ NIL laws are similar, the country is still left with a patchwork quilt of regulations in which some student-athletes have more leeway than others.

“We basically have the wild, wild west as far as NIL,” said A&M law professor Neal Newman, who began researching student-athlete compensation before the recent NIL rules took hold. “The bills that are in place are really guidelines that, other than some general principals, have no real teeth to them in terms of if you do violate it, what will be the penalty?”

Unenforceable laws were part of the backdrop of the verbal spat between Alabama head football coach Nick Saban and A&M’s Jimbo Fisher in May. Saban said A&M “bought every player” in its top-ranked 2022 recruiting class. Inducing prospective students with NIL deals is illegal under Texas law, a clause that was added to SB 1385 by West. Fisher fired back, asking reporters to investigate Saban’s recruiting tactics. Had either of coach been breaking the current NIL regulations, there is little the state or the NCAA could do. The NCAA is hamstrung by the Supreme Court ruling on the Alston vs. NCAA case with a concurring opinion by Justice Brett Kavanaugh that said, “there are serious questions whether the NCAA’s remaining compensation rules can pass muster.”

Schwertner said this is one of the many issues that could be raised as they monitor Texas’ NIL law.

“I think it’s recognized that this law is an important law, one that has longer and far reaching ramifications,” he said. “And what happens here in Texas is often followed by other states. So I think it’s incumbent upon us and the education committee to look at it, and I’m sure it’s something we’ll review during the interim and have part of it in our interim report and act on it accordingly during the legislative session based upon the input from a whole host of stakeholders, including those student-athletes, institutions and interested parties.”

Newman questioned how willing states would be to enforce the laws for their own schools as each tries to give their state the best competitive advantage through legislation.

The main complaint Saban, Fisher and other college head coaches have falls back on the fact that 29 different states have different legislation on how student-athletes can receive NIL compensation and the role schools can play in those dealings. Uniformity would bring competitive stability, but that would need to come from the NCAA or the federal government, both of which have been uninterested in weighing in on the subject, Newman said. In fact, the NCAA’s reluctance to allow student-athlete compensation is how we got to this point.

“The NCAA didn’t get what they were hoping to get, and politics being what they are right now, I just don’t see the climate where they are going to have that kind of focus on this issue to get something done,” Newman said. “I don’t see this is prioritized for them. We’ve got all this other stuff going on.”

Both Newman and Jim Cavale, CEO of NIL content and compliance software platform INFLCR, said the next horizon for Texas is allowing athletes to use school marks in NIL promotions.

“[A&M] is in a unique place, because they have a state bill ... that limits them in what they can do,” Cavale said. “There are schools in other states that are proactively using their marks in student-athlete name, image and likeness activations, and that is an advantage for those schools. For Texas A&M to not be able to do that at this point is a disadvantage. They have found ways to allow student-athletes to use the brand in specific-use cases, but I think the policy is average [compared to other states].”

Mississippi has passed new legislation that allows schools to be involved with the student-athletes’ NIL dealmaking process, which is outlawed in Texas. In February, Alabama became the first state to repeal its NIL legislation, allowing individual universities to produce their own guidelines under the vague NCAA guidelines.

With little regulation from the federal government or the NCAA, Newman believes it will be up to the market to calm NIL fervor.

“So what can we do? That’s going to be a really touchy situation, because [schools] can not formally collude, but I think somehow they will figure it out ... to keep thing getting out of control,” Newman said. “It may just settle on its own, and the market will be what the market will be, and [NIL dealmakers] will just finally say, ‘No, $350,000 ... that’s it. If that’s not enough, you’ve got to go somewhere else.’”

There is also the question of NIL compensation for high school athletes, which is currently illegal in Texas. It’s an issue that will more than likely be on the table for the Senate Higher Education Committee, West said.

“I think the biggest issues that we’re going to have to grapple with is whether or not high school athletes can enter into such agreements,” West said. “I specifically put an amendment on the bill to say no to that, so we’re going to now need to have those types of discussions.”

“This generation of individuals are so highly educated on technology, it’s so much easier now to build a digital business than it’s ever been before,” Sinatra said. “You can be an influencer, and if we’re not educating them on how to do that properly, they’re going to get into college, and it’s going to be the wild west for them.”

The Higher Education Committee’s interim work will culminate in a future hearing yet to be scheduled. Until then, the committee will work privately to gather information from stakeholders and compare data with laws in other states to see if future changes need to be made.

“What the next steps are will be dependent upon the input we receive concerning certain things that need to be tweaked with this particular bill and any modifications that need to be made,” West said.

In less than a decade the College Station football program has state championship and runner-up hardware in the trophy case. Now the Cougars c…

A&M LB Russell, who was Smith's passenger, is arrested

Most were surprised when Texas A&M senior Ainias Smith was arrested on a trio of charges last month. That’s not who they thought Smith was…

Texas A&M running back Isaiah Spiller signs a helmet during an autograph signing event at C.C. Creations on Oct. 30, 2021.

Fans wait in line during an autograph signing event featuring the Texas A&M football team at C.C. Creations on Oct. 30, 2021.