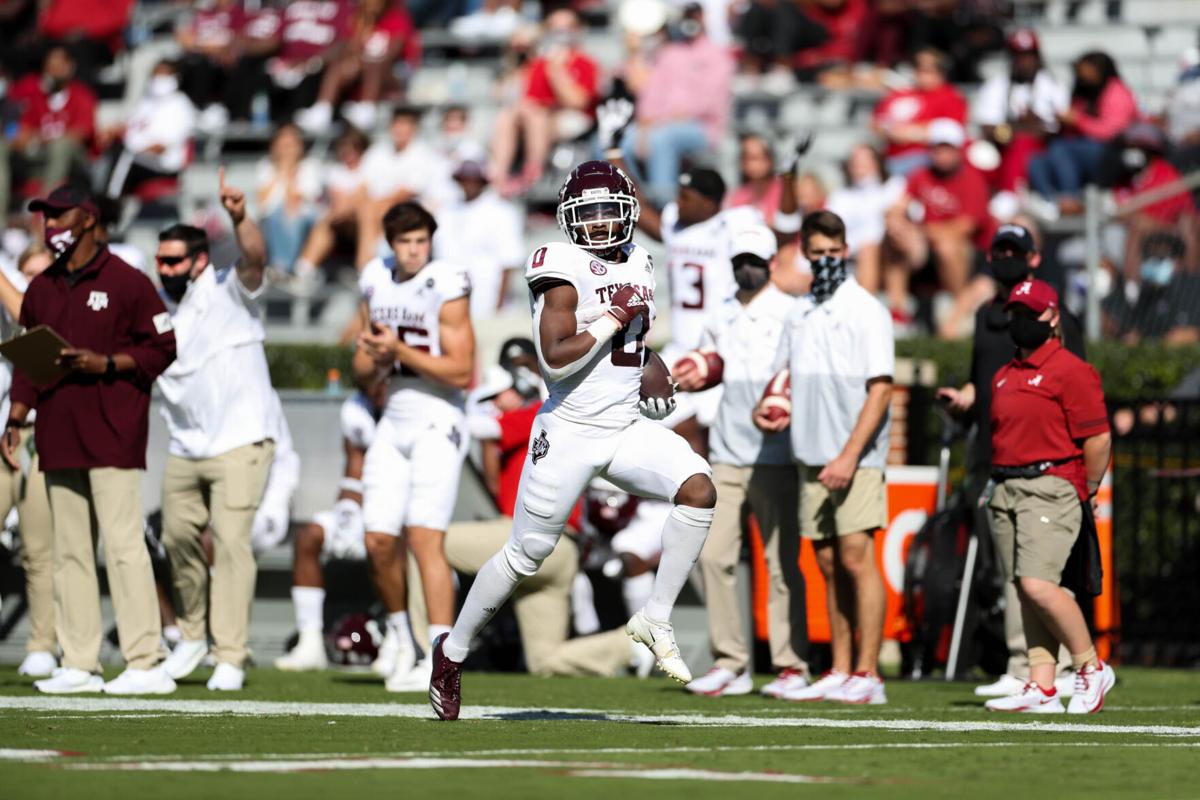 What went right: Pretty much the same offensive line that allowed five sacks in last year’s 47-28 loss to Alabama didn’t allow one in 47 passes. The passing attack was solid. Sophomore running back Ainias Smith and redshirt freshman Chase Lane each had six receptions to complement sophomore tight end Jalen Wydermyer who had eight.

What went wrong: The pick six Kellen Mond threw and the dropped fourth-down pass by Smith just before halftime were killers, a potential 28-point swing in the final score.

Bottom line: A&M should have had 6-7 scores against one of the nation’s best defenses. Mond, other than the interception, looked tons better than a week ago with his first 300-yard passing game since Auburn last year.

What went right: The tipped pass by end Tyree Johnson that led to 43-yard interception return by lineman DeMarvin Leal helped A&M climb out of a 14-0 hole.

What went wrong: The secondary looked like it was playing flag football as Alabama averaged a whopping 16.1 yards per attempt.

Bottom line: Alabama potentially has a pair of receivers who will be NFL first-round draft picks, but A&M made them look like they already were All-Pros.

What went right: A&M allowed an 11-yard punt return by Jalen Waddle and no kickoff return yardage. That’s a 300-yard improvement from last year when Waddle had 128 yards in punt returns and Henry Ruggs III had 131 yards in kickoff returns.

What went wrong: Seth Small missed a 37-yard field goal after A&M had moved 55 yards in 11 plays to open the game.

Bottom line: Small just can’t miss that field goal, but the Aggies had no gaffes after two big ones last week.

What went right: Head coach Jimbo Fisher, who also calls the plays, had a great game plan following the three-turnover snoozer against Vanderbilt. The Aggies spread the field, creating mismatches in space for Smith who had six receptions for 123 yards and two scores and 29 yards rushing on five carries. Mond made a lot of good throws and was quick with his decision-making.

What went wrong: A&M sacked Alabama quarterback Mac Jones only once, which seemed to match the times his receivers were covered. A&M never really stopped Alabama. Even on the interception, Alabama should have snapped the ball earlier and got a free five yards.

Bottom line: Last week, A&M’s season was doomed because of a sputtering offense; this week it’s the defense that fell apart, looking twice as bad. A&M also has to cut down on the penalties and little mistakes — all its first-half timeouts were taken because of personnel problems.

What went right: A&M showed in several stretches it could play toe-to-toe with a team expected to make the College Football Playoff.

What went wrong: A&M’s not good enough to beat a team as talented as Alabama with the kind of mistakes it made, especially if the defense doesn’t improve.

Bottom line: A&M played a lot better than it did against Vanderbilt, but the gap between it and Alabama is still wide — 28 points to be exact.

Picnic at the Park

Discovery on The Green

Texas A&M secondary struggles in 52-24 loss at No. 2 Alabama

TUSCALOOSA, Ala. — Facing second-and-22 in the third quarter, second-ranked Alabama had seemingly been put behind schedule by the Texas A&…

Cessna: Texas A&M offense shows spark against No. 2 Alabama after struggling in opener

TUSCALOOSA, Ala. — Second-ranked Alabama showed its might and mystique in a 52-24 victory over No. 13 Texas A&M on Saturday, but the Aggie…

CESSNA: Texas A&M’s defense has to improve against Florida after performance at Alabama