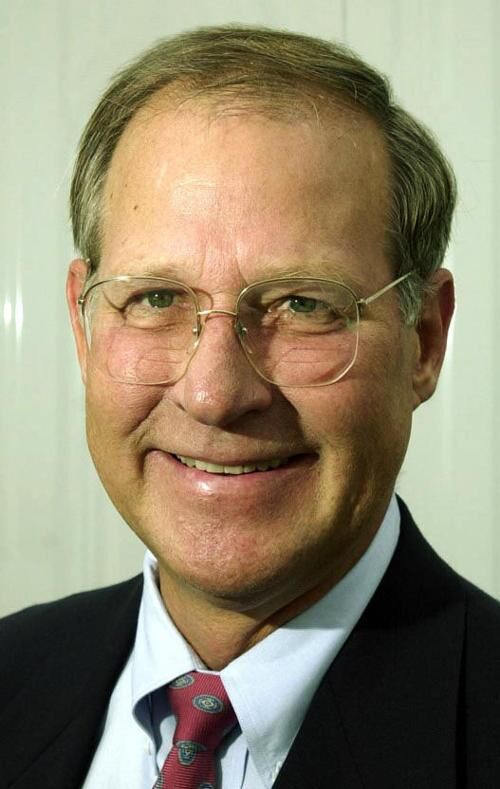 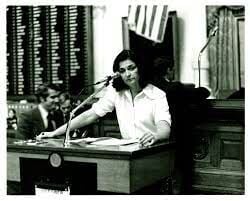 Photo courtesy of The University of Texas School of Law Frances “Sissy” Farenthold addresses the Texas House of Representatives, where she was the only woman. She died Sept. 26, shortly before her 95th birthday.

Sissy Farenthold in 1968 became the 19th woman ever elected to the Texas House of Representatives, and the only woman among its 150 members sworn in for the 1969 legislative session.

Then 42, Mary Frances Tarlton “Sissy” Farenthold, a lawyer and mother of five, was elected from her birthplace of Corpus Christi. She soon was in some huge legislative fights, and ran for governor twice — in 1972 and 1974.

And, was runner-up for the Democratic vice-presidential nomination in 1972.

Sissy, so nicknamed because her older brother couldn’t pronounce “sister,” died peacefully, surrounded by family members at her home in Houston Sept. 26, six days short of her 95thbirthday on Oct. 6. She died of complications from Parkinson’s Disease.

She came from a family of lawyers and progressive leaders, and lived up to her heritage. She campaigned for equal rights for everyone — women, minorities, gays — and for sexual freedom, abortion rights, and quality education.

After attending Corpus Christi High School, Sissy graduated from The Hockaday School in Dallas; from Vassar College at 19 in 1946; and from The University of Texas School of Law in 1949, at 22 — one of three women in a class of 800.

The law school’s library is named for her grandfather, Benjamin Dudley Tarlton, a former Texas House member, chief justice of the 2nd Court of Civil Appeals in Fort Worth, and distinguished professor at the UT law school, 1904-1919.

She fought a legal battle to protect unrestricted shoreline views in Corpus Christi, and helped establish the Organization for the Protection of an Unblemished Shoreline.

In 1968, a group of friends and local activists invited Sissy to run for the Democratic nomination for the House. She beat two men in the primary, and then unseated Republican incumbent Charles Scoggins in the general election.

In the state House, Sissy teamed with the only woman in the Texas Senate, Barbara Jordan of Houston, to co-sponsor the Equal Legal Rights Amendment to the Texas Constitution.

Though only re-elected to the House for one more term, in 1970, Sissy nonetheless became significant in Texas politics. In January of 1971, the lid blew off Texas government.

Farenthold and 20 other Democrats teamed up with nine Republican House members to call for investigation of what became known as the Sharpstown Stock Fraud and Banking Scandal. They were nicknamed “The Dirty Thirty,” though they grew to 35. Although a minority, they generated an enormous amount of publicity.

Mutscher eventually was indicted, and left as speaker.

That set the stage for Farenthold to run against Gov. Smith in the Democratic Primary.

Smith was badly tarnished by Sharpstown, and less so Barnes, because the Sharpstown bill had passed the Senate on his watch as presiding officer.

The primary results reflected the damage.

Sissy, no longer a House member, decided to run Briscoe again in 1974. But the public passion had cooled by the primary. Briscoe got 67.4% to Sissy’s 28.7 – meaning no runoff.

Although she had run second in 1972 for the vice-presidential nomination to Missouri Sen. Thomas Eagleton to be Sen. George McGovern’s running mate, and was the first president of the National Women’s Political Caucus in 1973, Sissy’s 1974 loss to Briscoe was her last run for elective office.

In 1976, she became the first woman president of Wells College in New York. In 1980, she returned to Houston, where she taught law at Texas Southern University and the University of Houston.

She was involved with many progressive groups to improve the nation and the world, and traveled widely to combat nuclear proliferation, apartheid in Africa, get college women involved in politics, and numerous other efforts to make the world a better place.

I am highly recommending Dr. Mengmeng Gu for College Station school board, Place 2.

Matthew Yglesias: Joe Manchin should leave his party, on one condition

Sen. Joe Manchin of West Virginia set the political world ablaze this week with the news — swiftly denied, it should be said — that he’s considering leaving the Democratic Party. To repeat, he denies it, in no uncertain terms. But the reality is that any Democrat representing a state Donald Trump won by almost 39 percentage points in 2020, and who’s at odds with his party’s base on several ...

Wise words we all need to hear

I was watching “The View” the other day, and while I’d normally come away from that experience scarred by the smirking face and screeching cac…

Analysis: A quick turn on property taxes with the long game in mind

Property taxes are higher in Texas than in all but a handful of other states. Voters know that, and when voters are interested, so are the peo…

We’ve long known about Colin Powell’s worst public sin. He finally acknowledged it nine years ago when he wrote, “I was mad at myself for not …

A pitcher for baseball to remember

The Atlanta Braves, once Milwaukee’s pride and joy and who earlier called Boston home, will take on the Houston Astros in the 2021 World Series.

Commentary: ‘Cancel culture’ has always been a problem for comedy

Is freedom of speech evaporating from the world of comedy? We hear a familiar mantra whenever someone like Dave Chappelle comes under fire: You can’t joke about anything anymore. PC police. Cancel culture. People are too sensitive. But does this premise hold up to scrutiny? Studying history, it seems clear comedians have more freedom of speech today, not less. At the start of the 20th century, ...

Photo courtesy of The University of Texas School of Law Frances “Sissy” Farenthold addresses the Texas House of Representatives, where she was the only woman. She died Sept. 26, shortly before her 95th birthday.