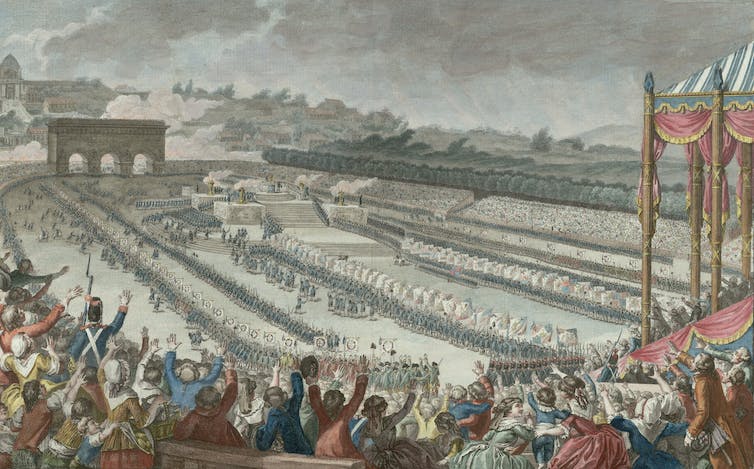 French people travelling to or living in English-speaking countries are sometimes surprised when asked about their plans for “Bastille Day”: they refer to the day as Quatorze Juillet (14 July).

France’s National Day is not really about the storming of the Bastille, and the day’s English language name conveys a misleading image. But it gives us an interesting glimpse into how the English-speaking world imagines France’s revolutionary past.

The most common misconceptions about the French National Day are that it is a celebration of the anniversary of the storming of the Bastille on July 14, 1789, and commemorates the official beginning of the French Revolution.

It is, in fact, a far more complex story. 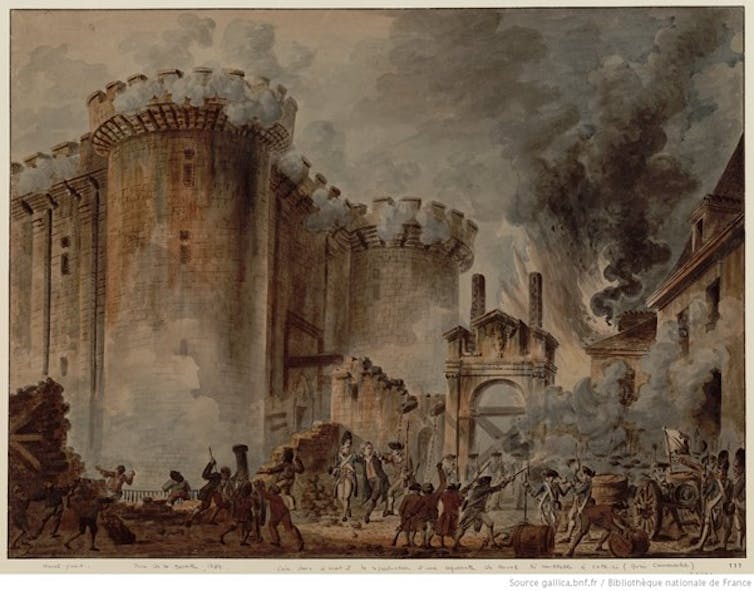 While English speakers refer to Bastille Day, in France the day is intimately related to a different historical event: the Fête de la Fédération (Festival of the Federation), a mass gathering held on July 14, 1790.

In 1789, the people of Paris attacked the Bastille: a political prison, a symbol of the monarchy and an armoury. The citizens aimed to seize weapons, ammunition and powder to fight the royal troops stationed in the vicinity of Paris.

1790’s Fête de la Fédération was designed to inaugurate a new era which abolished absolutism and gave birth to a French constitutional monarchy.

Tens of thousands of people from all provinces converged on the Champ-de-Mars in Paris to attend a military parade led by Lafayette, a mass celebrated by Talleyrand, and a collective oath-taking culminating in short but rousing speeches from King Louis XVI and Marie-Antoinette. 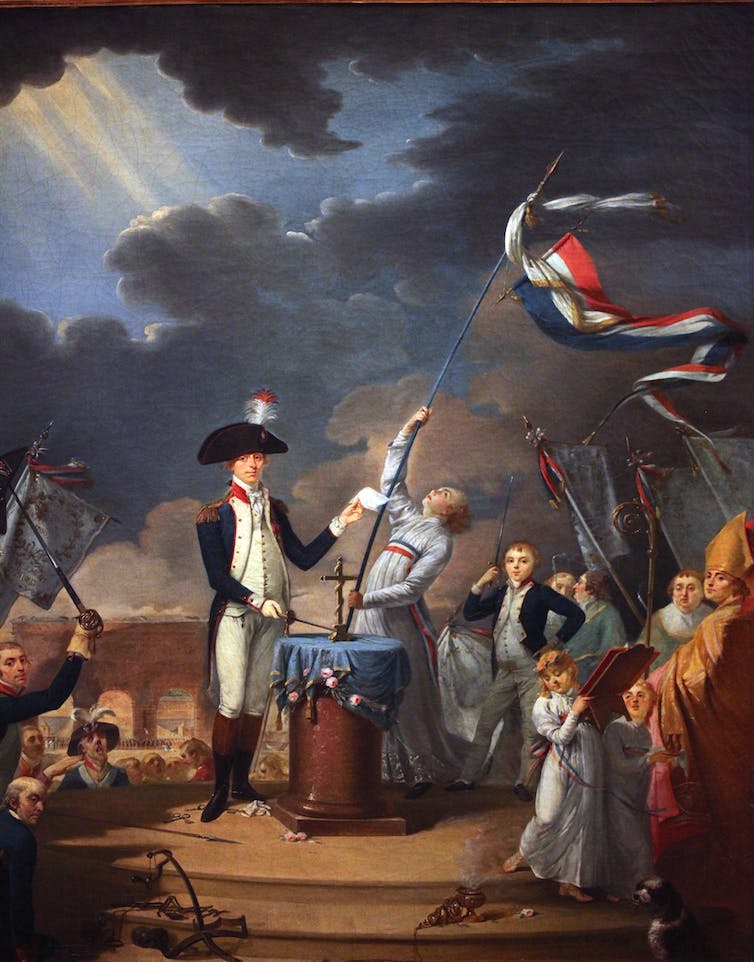 It was not an annual event: simply a day to herald in a period of national unity.

Less than three years later, the king and queen’s heads would meet the guillotine’s blade and the constitutional monarchy was replaced with the French First Republic.

France has had many days of national celebration, each reflecting the politics of its time.

Napoleon I (Emperor from 1804 to 1814) declared citizens should celebrate Aug. 15: the date of his name day and of the Assumption of Mary. 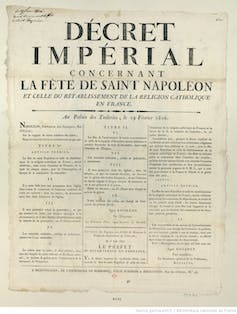 The Second Republic (1848-1852) adopted May 4, the first meeting of the National Constituent Assembly in 1848. Another new political regime celebrated itself once again.

In a little less than a century, France changed its national day half a dozen times.

New symbols for a new era

The disastrous and humiliating defeat France suffered against Prussia in 1871 led to the fall of Napoleon III and the advent of the French Third Republic, which needed its own new symbols.

For almost 15 years, there was fierce conflict between partisans of a monarchy and those in favor of a republican regime. The memory of the French Revolution became one of their main battlegrounds, and the choice of a national day an object of dispute.

Some advocated for July 15, the name day of the last Bourbon pretender, Henri, Count of Chambord, in the hopes of an imminent restoration.

Left-wing radicals pushed for Jan. 21, the anniversary of Louis XVI’s beheading in 1793.

Others wanted to celebrate the Tennis Court Oath, which signaled France’s rupture with feudalism on June 20, 1789.

In the spring of 1880, politician Benjamin Raspail submitted a motion to declare July 14 the national day: a date shared between the Fête de la Fédération — a symbol of unity for the right — and the left-oriented image of the storming of the Bastille. 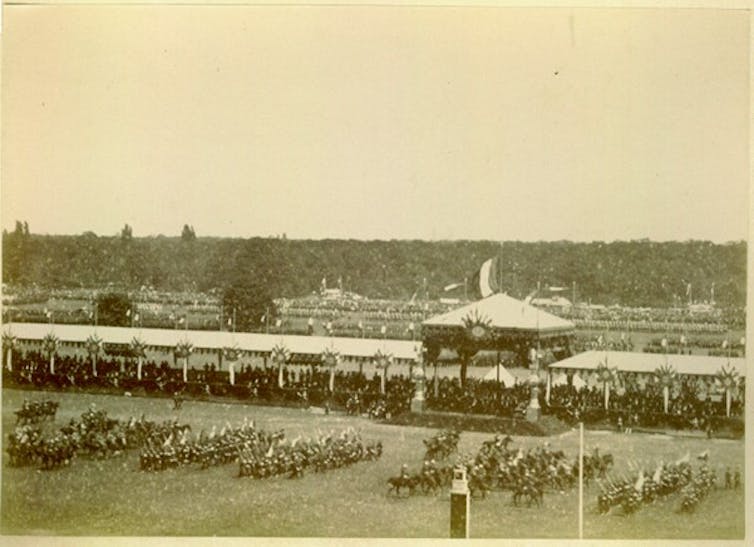 Thanks to the ambiguity of the date, the motion was passed into law — without specifying which Quatorze Juillet was to be commemorated. Raspail’s motion received the parliament’s approval based on the connection to the Fête, but the question of meaning was left open.

Quatorze Juillet inextricably embodies the curious and divisive legacy the French Revolution carries for the French. Beneath the veneer of celebrations, the question of the intrinsic nature of the Revolution and whether its goals — Liberté, Egalité, Fraternité — have been achieved is often relegated to the background.

It isn’t a day for reflection or politics. It is a day of leisurely family activities and celebrations, adorned with a lavish military parade displaying French power on the Champs-Elysées. In the evening, fireworks and popular dances known as Bal des pompiers (the Firemen’s Ball) take place throughout the country.

It is a time for fraternal celebrations, very much the ambition of the original Fête de la Fédération. References to the storming of the Bastille are invisible or near-invisible. The Revolution is seldom mentioned in the presidential interview.

Symbols of the 1789 Revolution are still the subject of contradictory interpretations and public controversy, as the recent Yellow Vests movement has shown. It is precisely this carefully maintained ambiguity in Quatorze Juillet which has enabled its endurance as France’s National Day: it can mean many things to many people.

The French can project their own understanding of what is being celebrated. They can choose between the storming of the Bastille and the people; the Fête de la Fédération and national unity; and everything in between.

Or they can simply enjoy a day off and admire the fireworks with their friends and family, oblivious to the complex story behind July 14.

This article is republished from The Conversation under a Creative Commons license. Read the original article.

Then: A Shau Valley, Vietnam

Read more: Friday essay: what is it about Versailles?

Watch Now: What will it take to keep schools open?

A team led by a retired FBI agent believes it has unraveled one of World War II's enduring mysteries -- how the Nazis found Frank's hiding place in August 1944 and sent her to die in a concentration camp.

Hong Kong to kill 2,000 animals after hamsters get COVID-19

Watch Now: Superyacht squeezes under bridge with less than 5 inches of clearance

See how the 262-foot MY Galactica yacht was transported from its shed in Oss, Netherlands, to the North Sea in this nail-biter of a video.

This is the amazing moment a wildlife photographer captured his wife receiving a big hug from an elephant seal.

When the snow begins to fall on Jabal al-Lawx (Almond Mountain) in Tabuk, Saudi Arabia, people set up tents and picnics to experience the cold weather.

This is the pulse-pounding moment a young giraffe chased a vehicle full of safari enthusiasts in a nature reserve in South Africa.

'A cockroach moving in my head': Insect removed from man's ear after 3 days

The man had taken a dip at his local pool in New Zealand when, unbeknownst to him, the creature had crept inside his ear.

This Chinese city found a Covid cluster. All 13 million residents are now under lockdown

The sweeping restrictions, which prevent people from leaving their homes, come as the country braces for the Lunar New Year travel rush, followed by the 2022 Winter Olympics.