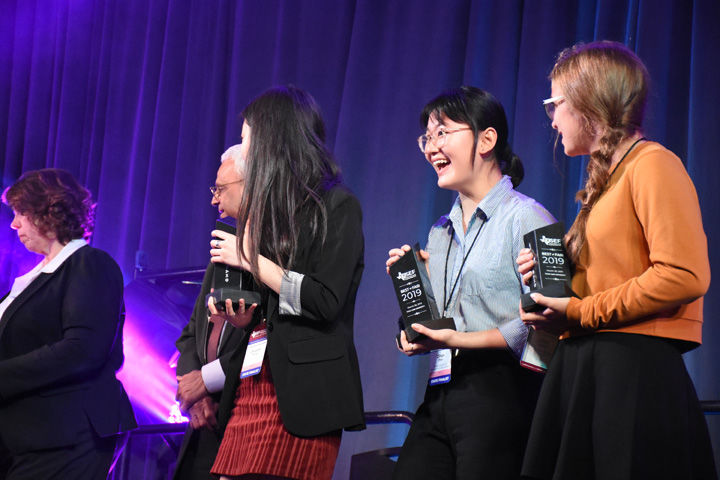 Zihan Zhao, second from right, from Texas Academy of Math and Science in Denton, smiles as she accepts her award after being named one of eight “Best of Fair” winners who will be advancing to the Intel International Science and Engineering Fair in Phoenix. 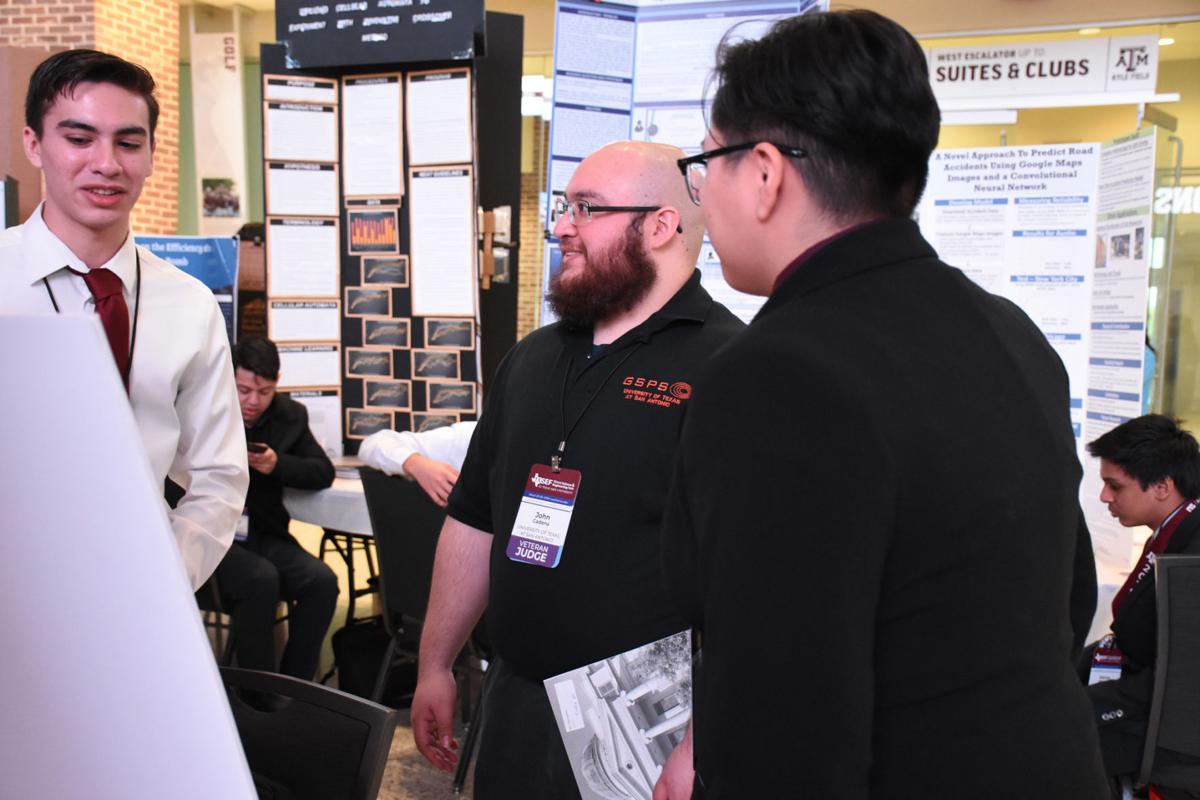 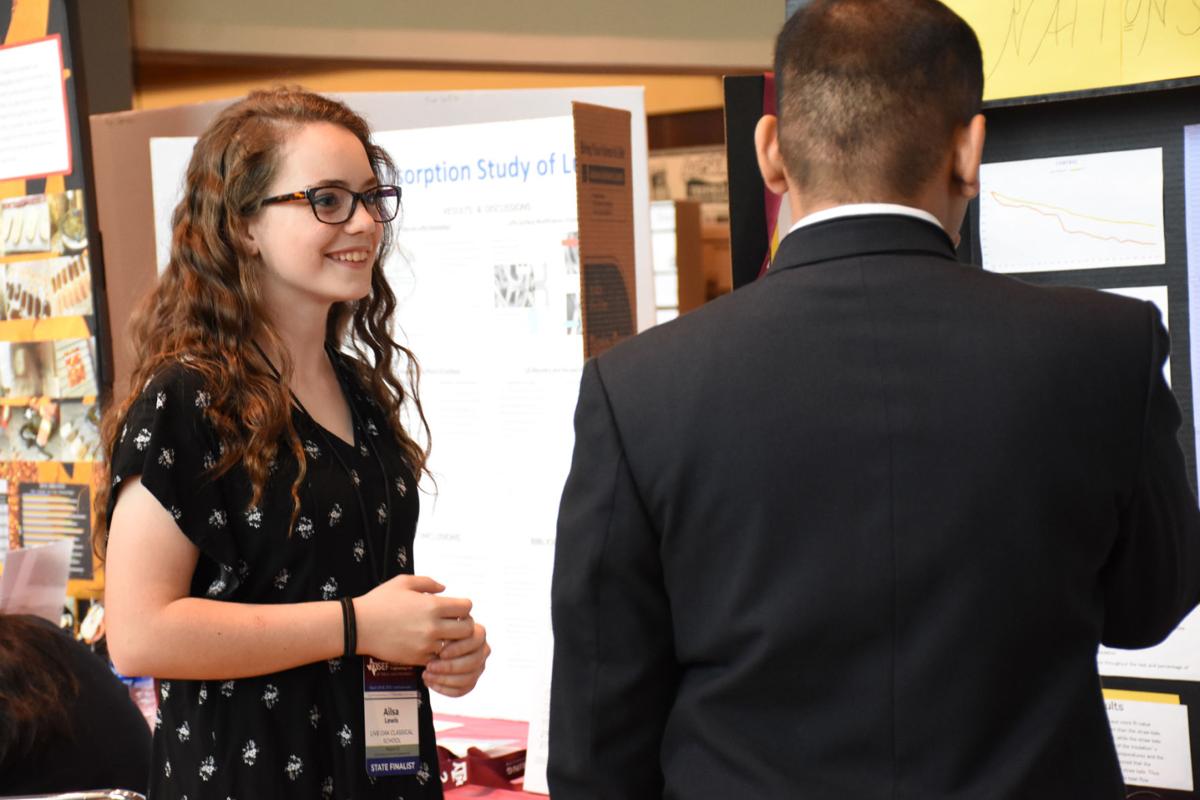 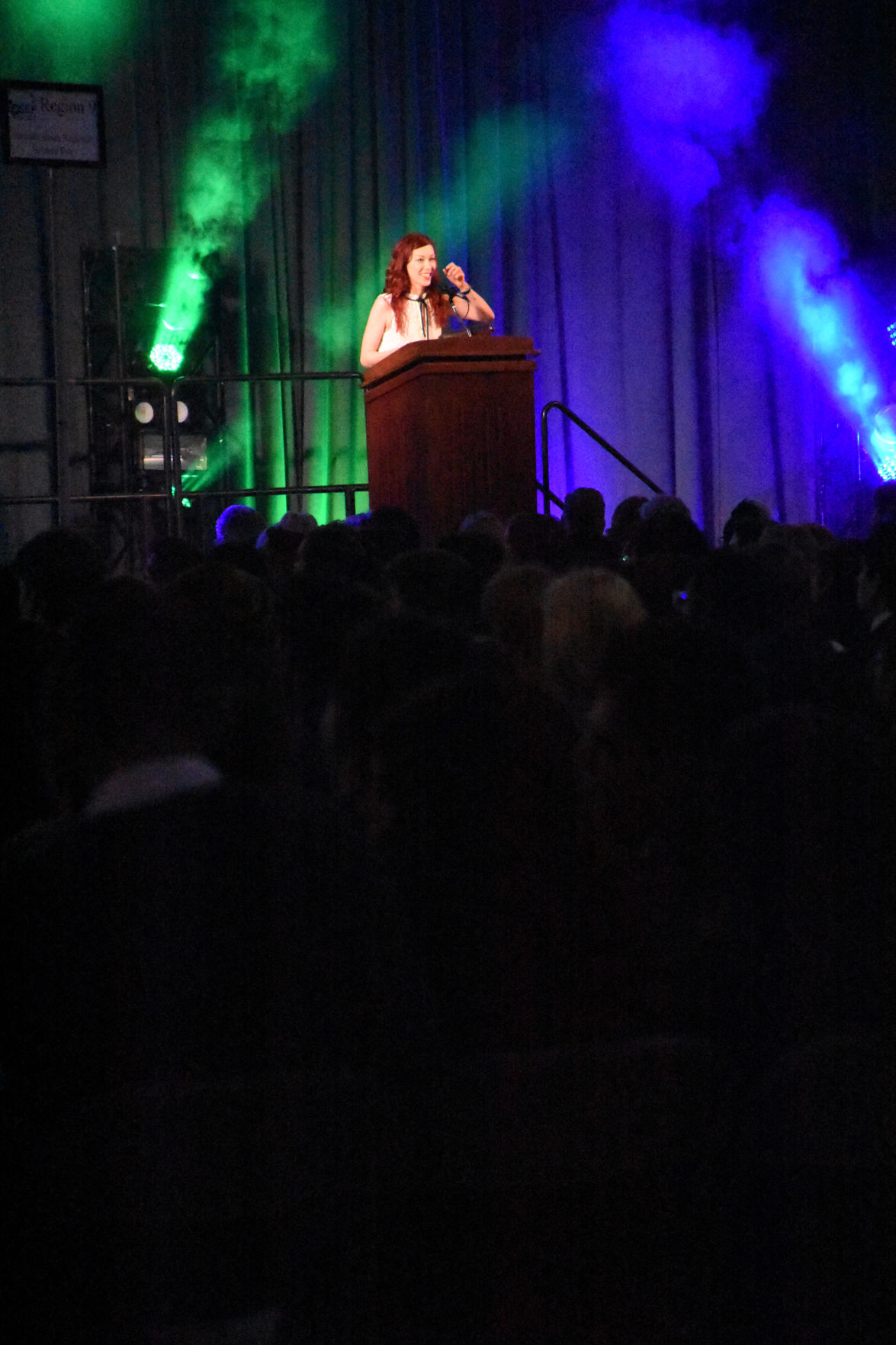 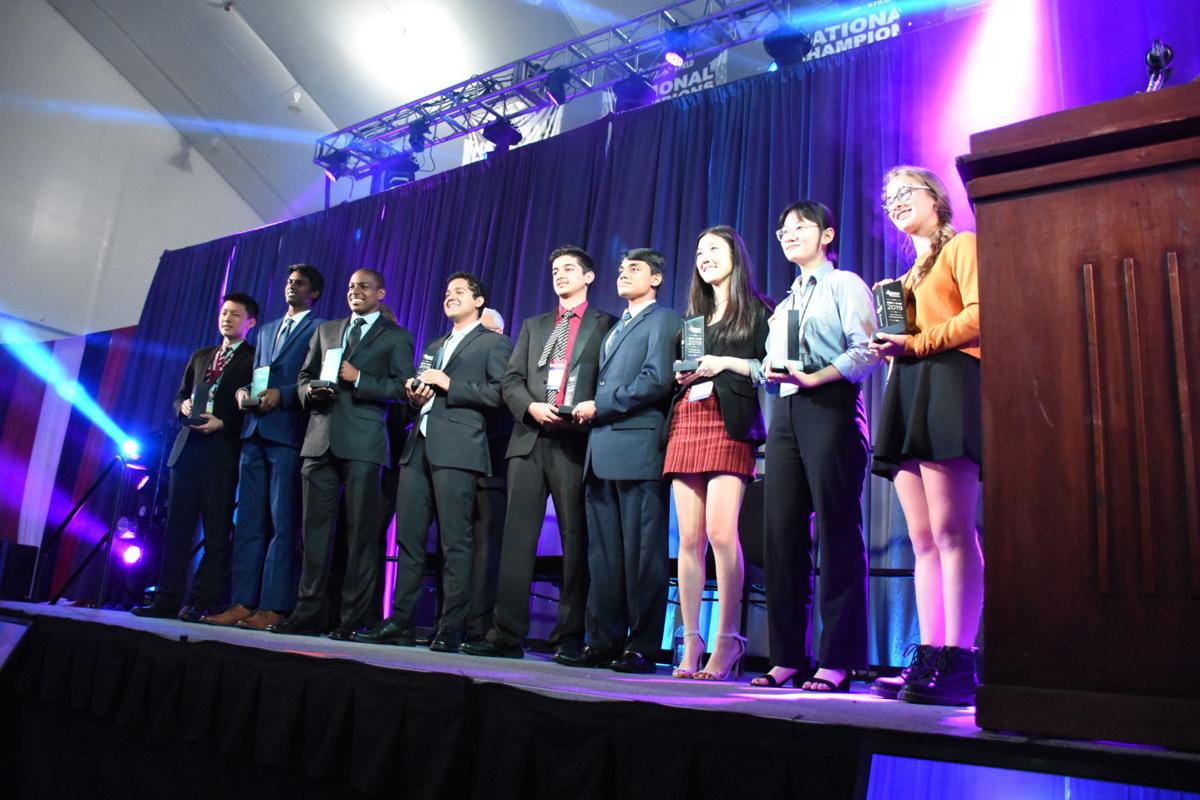 For the first time, the fair was at Texas A&M University after spending many years at the University of Texas at San Antonio. Of the thousands of presenters, eight were selected as “Best in Fair” and will move on to the Intel International Science and Engineering Fair in May in Phoenix.

Co-sponsored by the Texas Workforce Commission and Exxon-Mobil, the fair featured the top three finishers in 22 categories at 14 regional competitions throughout the state, from Lubbock to Laredo and El Paso to Kilgore.

“Being able to have this experience of actually making a poster and having the entire project was so amazing,” said Zihan Zhao from Texas Academy of Math and Science in Denton, one of the high school division competitors.

“Plus, sometimes, when you do your research, you’re not allowed to go to conferences because you’re so young. This actually gives us an opportunity to actually be able to practice in the real world and present all of our findings. It’s like so exciting that we get to talk about what we’ve done.”

Before the competitions that qualified Zhao to travel to College Station for the state competition, she had never participated in a science fair. “Since we were already working on these research projects in the first place, it was like, might as well present it, might as well have this experience,” she said about her approach to the fair.

At Saturday’s awards ceremony, she was announced as one of the eight students traveling to the international competition representing Texas.

High school competitor Kabir Jolly from Academy of Science and Technology in The Woodlands was also announced as one of the eight top students traveling to Phoenix.

A five-year veteran of science fairs, he said, he has gotten more comfortable and now enjoys presenting his research to the judges, having conversations with professionals in the industry and learning from the feedback he gets from them.

“I guess the most impactful part is really taking it out of an academic setting, and I was able to do clinical testing and work with humanitarian organization to get their feedback on the project so in the future I hope to see it in the real world as well,” he said.

Fatima Khawar and Hafsa Aliyu from Austin Peace Academy were two one of the high school students who received the Future Engineer Award for their projects.

“It feels good to be a woman in science, and just being the age that we are,” Khawar said. “It’s like a field that’s mostly dominated by males, especially white males, so it’s good to feel appreciated, I guess.”

A&M graduate student Mo Adesanmi, a judge and Texas Science and Engineering Fair veteran, said it is a little intimidating to judge the projects because the students are so smart.

As a veteran participant, though, he understands the nerves the students are feeling, the preparation each student put in, the stories that inspired the projects and the passion that went into each design.

“For most of these students, they’ve poured the better part of any sort of time they have,” Adesanmi said.

During the awards ceremony, the students were told multiple times that even though they did not all receive ribbons or plaques, they are all winners in the sense that they made it to the state competition and received a finalist medal.

“Just making it to the state competition is a huge accomplishment, and you should be very proud to be here. … To our future scientists and engineers, you are a constant source of encouragement and inspiration. The next great discovery could come from any one of you,” Dean of the Texas A&M College of Engineering Katherine Banks said in a recorded video.

Keynote speaker Alie Ward, science correspondent for The Henry Ford’s Innovation Nation with Mo Rocka, on CBS and host of Did I Mention Invention? on the CW, gave the students five pieces of advice she has received from innovators and scientists from around the world.

That advice was be passionate, don’t hide your ideas, get help, failure is success and show up like you belong and have fun.

The Daytime Emmy Award winner encouraged the students to be themselves and follow their passion.

She told them nothing, not even vacuums, were created in a vacuum, and encouraged them to ask for help when they need it.

As they continue their research, she said, they should not be afraid of failure because failure is a part of success.

The Hearne Police Department is investigating a mass brawl involving around 20 people that left several injured.

Bryan school board moves first day of school to Aug. 20

The Bryan school board on Monday voted to push the first day of school from Aug. 17 to Aug. 20 to give district and campus officials more time…

One killed in auto accident in Bryan

During Thursday’s special meeting, the College Station school board unanimously approved a compensation plan that will increase the starting teacher salary and grant other eligible employees at least an additional $1,000.

A Bryan woman was arrested Thursday after authorities said she was in possession of several drivers licenses and credit cards that did not belong to her.

Texas A&M University President Michael K. Young told the Wall Street Journal on Tuesday that A&M hasn’t set a threshold to shut down in-person classes this fall, but 100 new infections a day has been mentioned as a mark to warrant a shutdown.

Zihan Zhao, second from right, from Texas Academy of Math and Science in Denton, smiles as she accepts her award after being named one of eight “Best of Fair” winners who will be advancing to the Intel International Science and Engineering Fair in Phoenix.