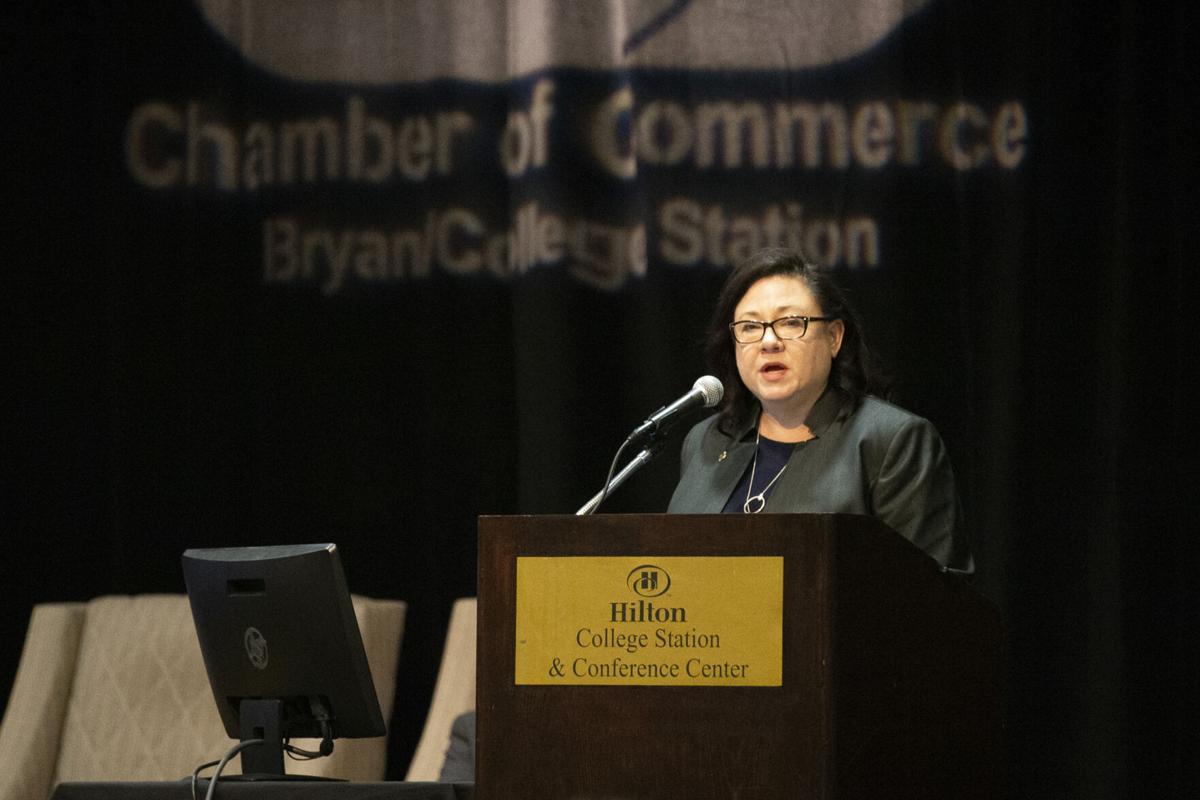 Natalie Ruiz, director of economic development for the City of College Station, speaks at the Bryan/College Station Chamber of Commerce's Economic Outlook Conference on Wednesday, Feb. 24, 2021, at the Hilton College Station. 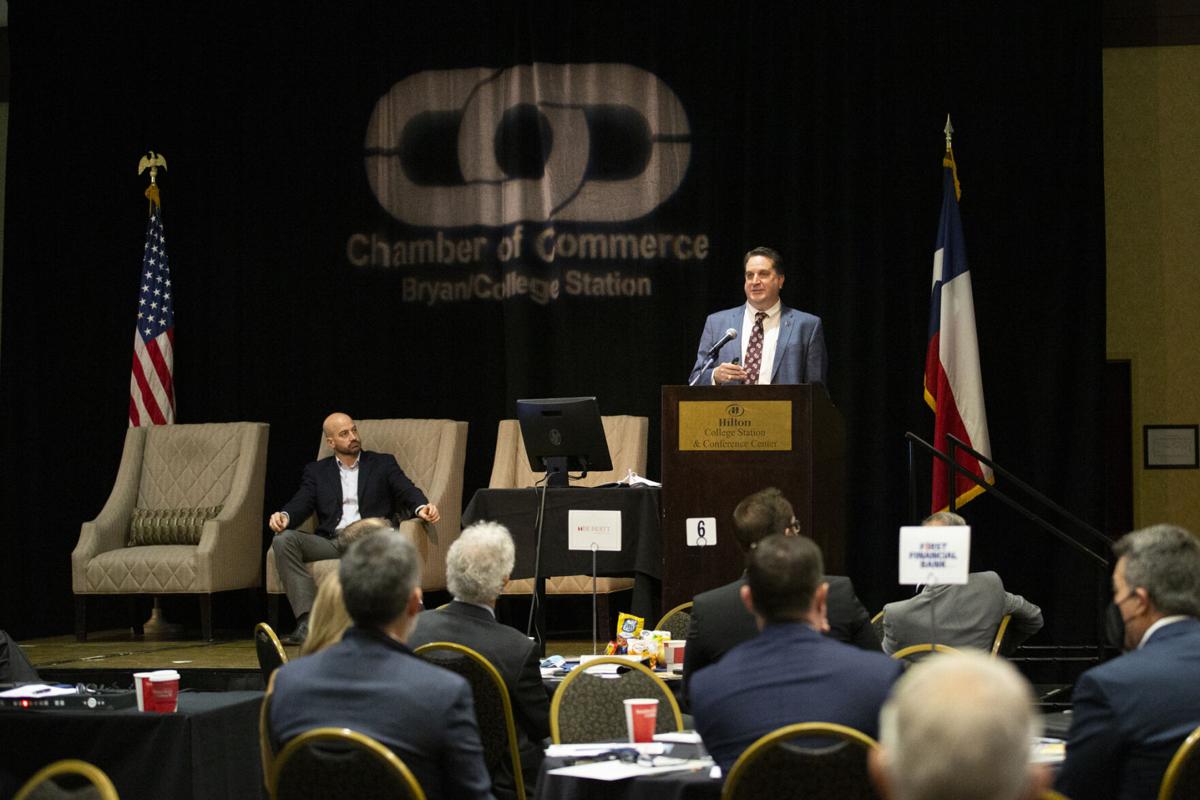 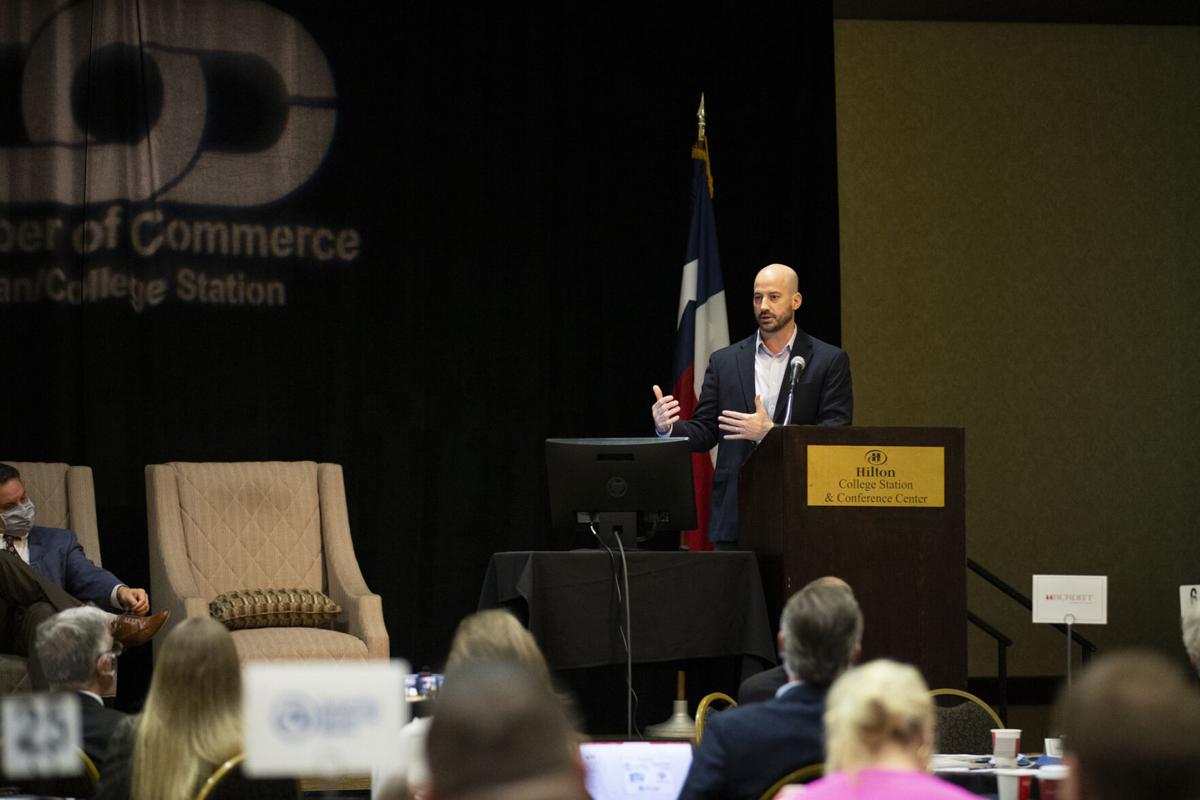 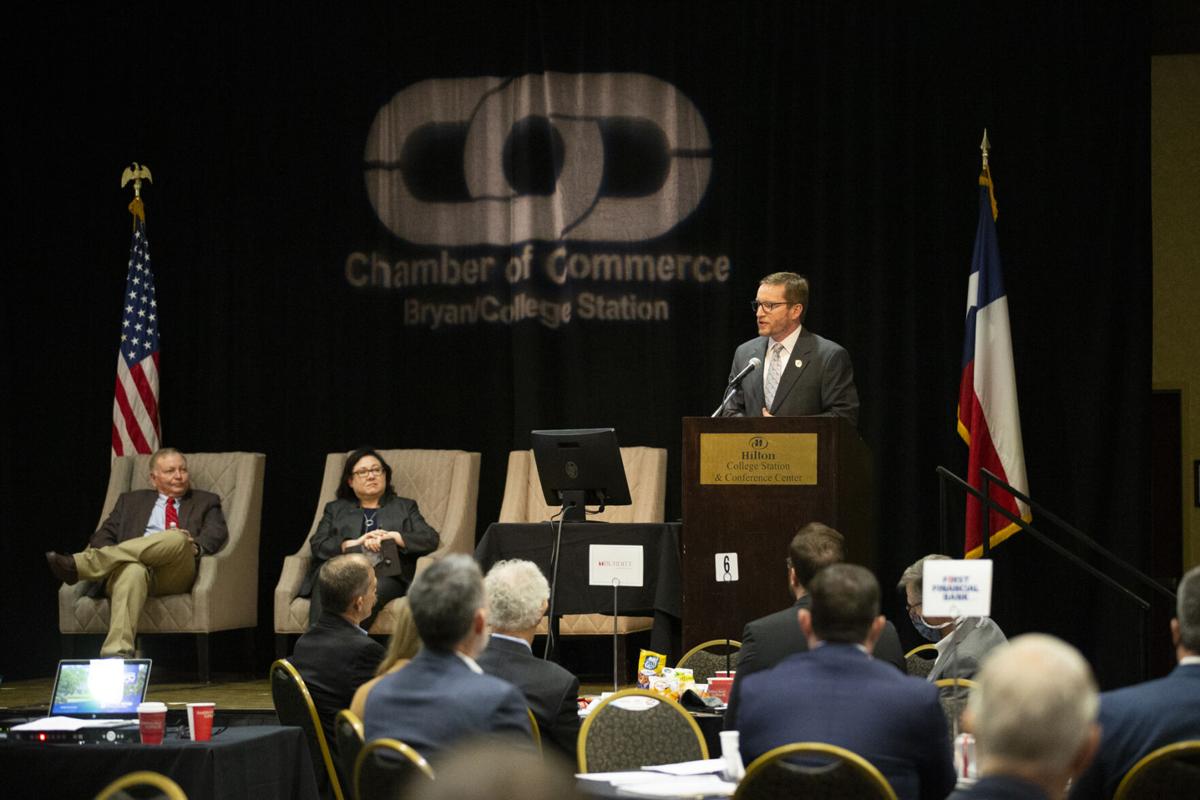 City staff members and elected officials highlighted restaurants and other businesses that opened during the pandemic, cited a strong housing market and noted population growth as positive signs for the local and regional economy, even as presenters also acknowledged the myriad hardships faced by many small businesses, retailers and other industries during the COVID-19 pandemic.

Economist Jim Gaines, the conference’s keynote speaker, said economic “trends are most definitely up,” though still in recession — and cautioned that when measuring whether the economy is recovering, month-to-month comparisons or comparing one month to the same month in a volatile 2020 could be misleading.

Statewide and nationally, Gaines said, weekly unemployment claims are considerably lower than in the early months of the pandemic, but still much higher than before the rise of the virus.

Gaines said the severe winter weather and effective shutdown last week in Texas impacted the forecast regarding the first economic quarter of 2021. Looking forward, Gaines anticipated that most jobs will likely be recovered by the end of 2021, with the caveat that “we’ve got to have control of the virus.”

Gaines, whose presentation was prerecorded, was among several speakers to note the pandemic’s particularly harsh effect on service industries.

An audience member asked Dr. Seth Sullivan, Brazos County’s alternate health authority, to weigh in on what the tailgating and fall football scene might look like.

In the conference’s second session, leaders from the cities of Bryan and College Station as well as Brazos County Judge Duane Peters gave attendees updates on capital improvement projects and provided other reflections on the economy.

College Station Director of Economic Development Natalie Ruiz said the city has grown to just shy of 125,000 people, according to population estimates. Ruiz said residential and commercial growth remained strong in 2020 despite the pandemic.

“We added over 500 new single-family homes, and there were some multifamily and attached homes as well,” Ruiz said. She said that approximately $317 million was invested in new construction, above the 10-year average.

Ruiz also spoke on the pandemic’s impacts on retail and service industries.

“When you look at the changes and accommodations that our local and national retailers had to make for COVID, I think those are here to stay,” Ruiz said, lifting up expanded limited contact offerings that began as pandemic-induced necessities.

The estimated population in Bryan is 92,210 people, Dunn said, noting that new Census data is not yet available due to the pandemic.

“For the third year in a row, Bryan broke a record for the number of detached, single-family permits. That’s 720 permits. We never thought we’d get 500 permits, and we were surprised, even during a pandemic, that we continued to see that type of growth,” Dunn said.

Sudanese man in NYC unable to talk to family

With many people feeling hopeful as the rate of COVID-19 vaccinations increases, economists and business leaders are working to estimate the pace and timetable for full economic recovery in and beyond the Brazos Valley.

The unemployment rate for the Bryan-College Station metro area increased to 5.9% in November from 4.8% in October but remained the second-lowest rate among Texas metropolitan areas.

Since March 17, when the county reported its first coronavirus case, the Brazos County Health District has reported 11,561 cases of the coronavirus.

Natalie Ruiz, director of economic development for the City of College Station, speaks at the Bryan/College Station Chamber of Commerce's Economic Outlook Conference on Wednesday, Feb. 24, 2021, at the Hilton College Station.