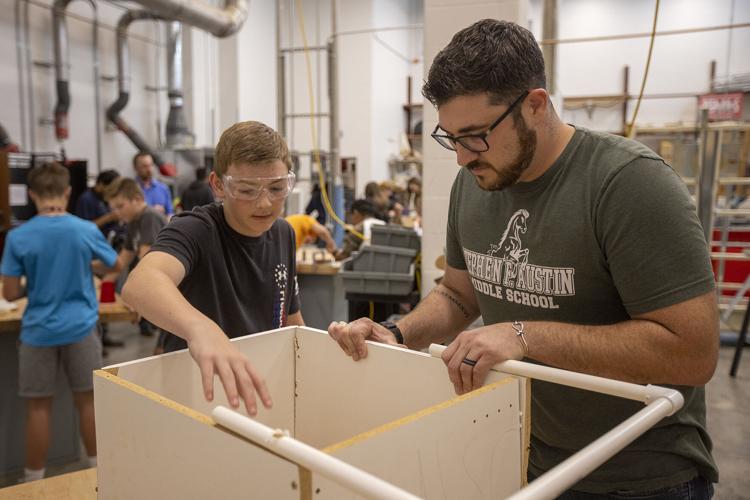 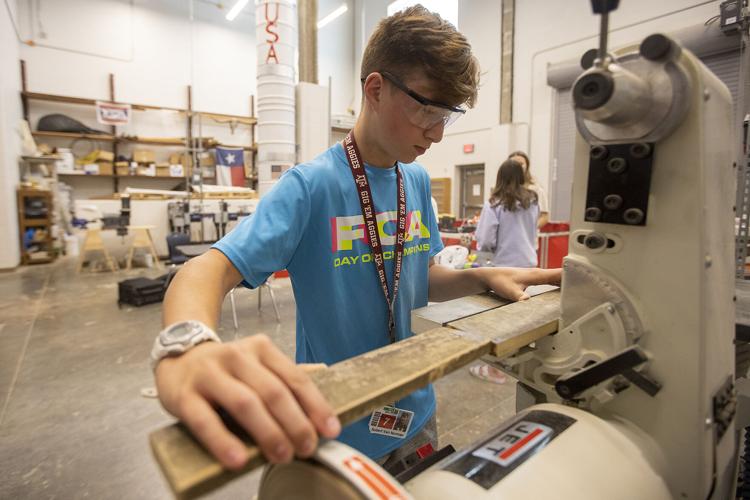 Lake Van Norman trims a wood board at SFA Middle School in Bryan on Thursday. Engineering students are designing and building therapeutic toys for children with cerebral palsy. 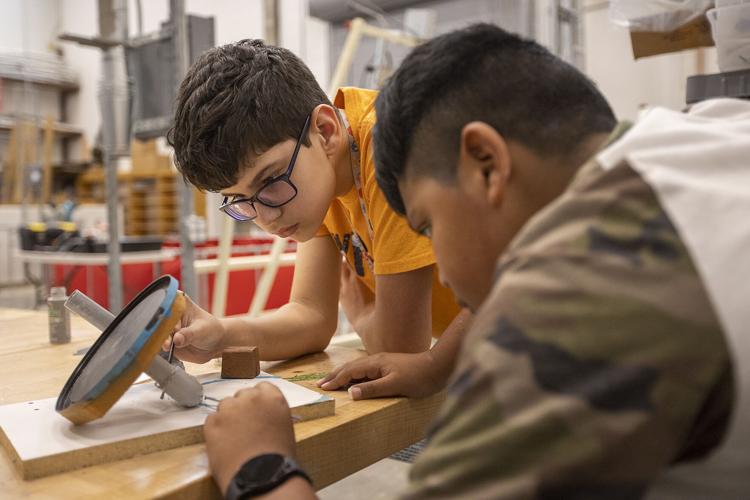 Austin Cameron, left, and Jayden Quintero paint their project at SFA Middle School in Bryan on Thursday. Engineering students are designing and building therapeutic toys for children with cerebral palsy. 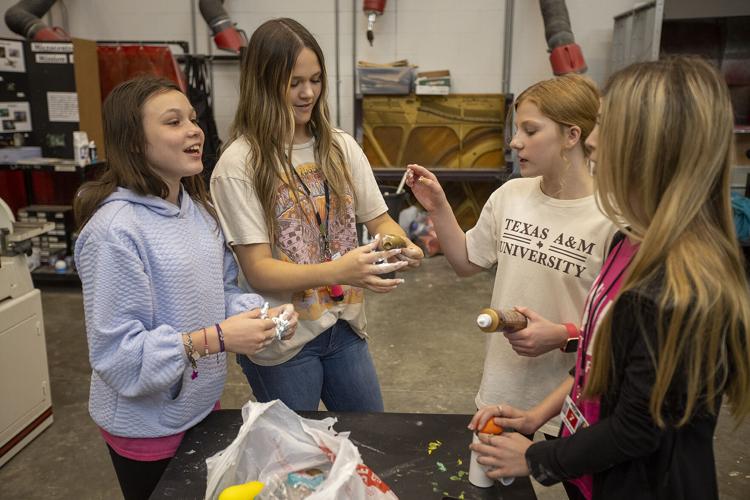 Makenzie Adkinson, from left, Cameryn Kubichek, Brooklyn McBride and Rylie Arredondo work on their project at SFA Middle School in Bryan on Thursday. Engineering students are designing and building therapeutic toys for children with cerebral palsy.

Seventh graders at SFA Middle School are learning how to utilize their engineering skills to produce prototypes for therapeutic toys for children with cerebral palsy, with the help of their engineering teacher, Parker Knutson.

“At the beginning of the school year we did a quick design challenge where the students had to come up with an ankle-foot orthosis for a child with cerebral palsy,” Knutson said. “As a class, we learned about cerebral palsy and the difficulties these [children] may have, and then throughout the whole year we went through the engineering design process by sketching, to then encompass all of that to where the students could come up with their own project for the end of the year by creating their own toy that would be therapeutic for a child with cerebral palsy.”

As an educator for the last 10 years with SFA Middle School, Knutson said being able to teach principles of applied engineering for seventh grade students has been rewarding. The students had six choices of variations of cerebral palsy to work on for their creations during the last two weeks of school, he said.

“One of the student groups chose to create a toy for a child with pincer grasp difficulties,” Knutson said. “The students made a cube, and on each side of the cube they had different activities that would help a child practice a pincer grasp. So they had tiny dinosaurs attached to the side, or they had screws and bolts that they could screw in and out on the side of the box, and they had a sand activity on the side as well.”

Jose Gomez, 13, is in Knutson’s class, and said he has learned a lot. He plans to purse engineering as a career.

“It has been nice learning how to use tools in this class and work with my classmates on different projects. Working on a project like this is important because people shouldn’t be limited by their disabilities. They should be able to do whatever they want,” Gomez said. “We have been shown how to use these tools that are around here, and I would like to do something with engineering or programming in the future.”

Each group came together with ideas and chose a design collectively, Knutson said, and then used engineering software to design it. Following that, students brought their measurements and their materials list into the shop and have been building the toy design, he said.

“One other choice the students could make was a walker for children who had difficulties with walking. We have had students build a small car, or other things, based off the child’s interest,” he said. “The project idea comes from Project Lead the Way, which is a course that I am certified to teach, but I feel that it is really important to tie in real-life situations and make engineering — something that is abstract — be something that is relatable and more tangible for them.”

Knutson said students with cerebral palsy have shared their experiences with his students in past years.

“The fact they could see their peers who have struggled with this, and they overcame … we are learning about that, and we are trying to make a difference,” he said. “Even if the toy they made doesn’t actually go to a child, they have thought about that process and have put it into action.”

The engineering class is a part of the school’s career technical education courses, and Knutson said being able to give the students problem-solving skills is valuable for him and for their futures.

“Through the difficulties that teachers have had, and this year specifically just coming off of [the pandemic], to be able to see this is why teachers do what we do,” Knutson said. “And to see the passion that students put into their projects and how much they care and want to learn and be involved, is really why we do what we do. We just want to see success in our students. To see them come up with ideas that seem so abstract to me, and put it into a real working model or prototype, it makes me feel really good as a teacher that these are skills they are going to be able to take on past the classroom.”

The seventh graders will present their projects during the final week of school. Stephen Henry, 13, worked with his classmates to build a toy that would help a child with cerebral palsy who may have difficulties with wrist extension.

“The toy we are working on has this little pool noodle that you pull back and it launches a ball into a stack of cups,” he said. “We thought it would be fun, and certainly it is not too expensive, and it is also very effective because it helps with your wrist.”

Henry said it is important to connect with children who have disabilities to create something that could help them with daily tasks, and still be enjoyable for them based on the child’s interests. In the future, he hopes to pursue a career in software developing.

“Not everyone can do things that people without disabilities can do. Helping them out and doing what you can is the right thing to do,” he said. “I think doing it through engineering is pretty cool, because you are learning something new and you are helping out people. And I think just giving them the opportunity to be equal and just treated how they should be is just so great.”

Bryan school board approves $4.17 million in raises as the district faces teacher needs

No more hoodies, no dresses, skirts for older students in Texas school district

A Texas school district announced an updated dress code for the upcoming school year, banning hoodies and limiting who can wear dresses and skirts.

President Biden said he's considering a federal holiday on the gasoline tax with a decision possibly coming this week. Here's what it would mean.

Bryan’s Ewing Brown, or Sonny to his family and friends, was known as the local barber at Sonny’s Barber Shop in Bryan. His wife, Dotty, said …

Watch Now: Disney caught in the middle of political firestorm over Florida law

Watch Now: Disney caught in the middle of political firestorm over Florida law

Lake Van Norman trims a wood board at SFA Middle School in Bryan on Thursday. Engineering students are designing and building therapeutic toys for children with cerebral palsy.

Austin Cameron, left, and Jayden Quintero paint their project at SFA Middle School in Bryan on Thursday. Engineering students are designing and building therapeutic toys for children with cerebral palsy.

Makenzie Adkinson, from left, Cameryn Kubichek, Brooklyn McBride and Rylie Arredondo work on their project at SFA Middle School in Bryan on Thursday. Engineering students are designing and building therapeutic toys for children with cerebral palsy.