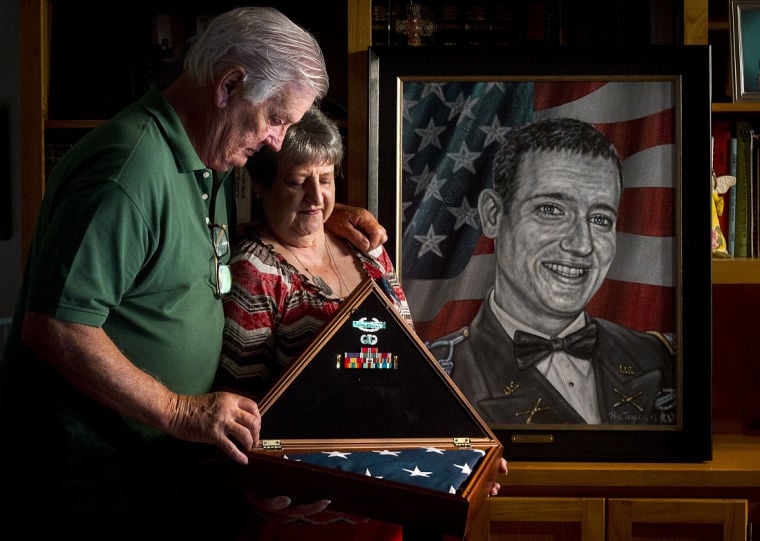 Andy and Sondra Andrews of Cameron lost their son, Army 2nd Lt. Darryn Andrews, in 2009 when he was killed while serving in Afghanistan. Andrews died while trying to save his fellow soldiers from and ambush. (Eagle Photo/ Stuart Villanueva) 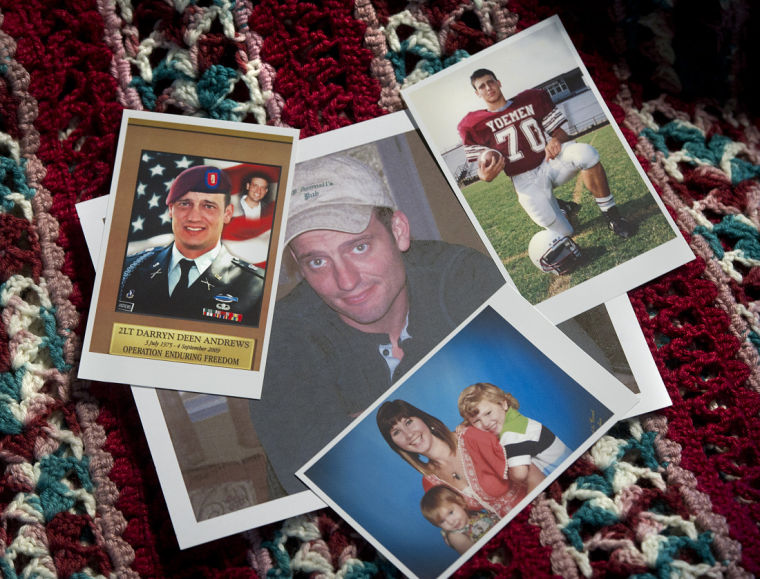 Photographs chronicle the life of Darryn Andrews, his time as a student at Cameron High School and his wife Julie and their two children, Daylan and Jacey. (Eagle Photo/ Stuart Villanueva) 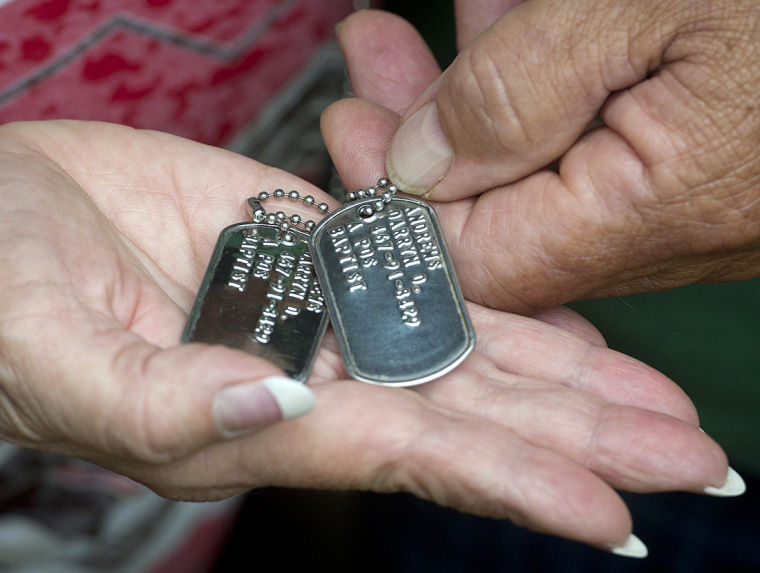 "He said, 'You can read this when you're sad while I'm gone,'" Sondra Andrews said. "It was his favorite book when he was little. We would read it -- and make it -- all the time."

Darryn, whose passion to serve his country was ignited after 9/11, swore to his parents, Sondra and Andy, that he would return from Afghanistan.

"He told his mother he might get an arm knocked off or a leg knocked off, but he'd be back," Andy said.

Miniature American flags line the walkway at Sondra and Andy's Cameron home, and a gold star with Darryn's name beneath it faces out of their dining room window. Photos and paintings of their son decorate the home where he spent his teenage years -- the home where he returned to visit his parents after his first tour in Afghanistan, but never after his second.

In September of 2009, Darryn was serving his second tour with 1st Battalion, 501st Parachute Regiment, when his unit was ambushed.

The unit was struck by an improvised explosive device, then small arms fire, including a rocket-propelled grenade.

"If he'd stayed in the truck like most officers do, he wouldn't have been killed," Andy said.

Sondra said Darryn's unit had been hit with an IED the week prior, leaving Darryn with a concussion. His parents said he should have been confined to the base, but he signed himself out when he learned his men were going on a mission.

While working to get their vehicle out of a hole made by the IED, Darryn spotted the onslaught and threw three of his men to the ground to protect them. He was mortally wounded.

At the age of 32, Darryn left behind his parents; his twin brother, Jarrett; his wife, Julie; his 2-year-old son, Daylan; and Jacey, his daughter who was born that following December.

On Memorial Day, Darryn was awarded the Texas Legislative Medal of Honor, a recognition that is given to one person every two years.

"I told [Darryn's] brother, all this just brings it back up," Andy said, tears welling in his eyes. "But all the honors I can get for him, I'm gonna do it. ... You think every time, 'I can get through this without crying,' and I can't."

With his grandfather, father and uncle having served in the military, Andy and Sondra said, enlisting was something that was "prepackaged" in Darryn.

"Jarrett loved to play ball and ride anything with wheels, and Darryn had all of his little soldiers, then he graduated up to his little army men," Sondra said. "Our daughter used to say, 'Well, Mother, you let him watch too many John Wayne movies.'"

Before joining the Army, Darryn worked as an international sales manager, and as a teacher and a coach in Cameron and in Dallas.

"What he really always wanted to do was go to the military," Andy said. "When he got out of high school, he was going to go right then, but his mother talked him into going to college for one year."

Julie lives in New Braunfels with their two children.

"His son was three days shy of his second birthday [when Darryn died], and his daughter hadn't been born," Sondra said. "Their memories are going to be based on what is shared with them. ... I think the award and all the things that he has been honored with just gives them validity that what he did was not necessarily worth it for them to lose their dad, but for them to understand where he was coming from and the importance of what he did."

During his service, Darryn was awarded at least two Bronze Star medals with valor, a Silver Star medal and three Purple Heart honors.

"One of his guys said that in all his years of serving, he had never served under an officer like Darryn," Sondra said. "If there was a 'shitty' detail, he'd be the first to take it."

Sondra and Andy said they have kept in contact with several of the men who served with Darryn, something that helps them cope with the death of their son.

"The Bible says 'Great[er love] has no man than to lay down his life for a friend,'" Day wrote in the letter. "Darryn did this without a thought of hesitation. Darryn committed himself to his men, to his army, to this fight and his family. He may not have believed in all that this war stood for or what it intended to accomplish, but he believed in his men and the cause his men fought for daily."

Sondra, who wears her son's dog tags around her neck, said there's no pain greater than losing a child.

"We're a Gold Star family," Sondra said, her voice shaking with emotion. "You don't make us cry. We have the tears already. You just give us reason to let them out."

Falls County Sheriff Ricky Scaman was arrested Monday on charges including sexual assault and assault of a public servant, based on an investigation by the Texas Department of Public Safety.

Anyone with information about the incident, or any other similar type of misconduct, is asked to call the Title IX Office at 979-458-8407 and/or the University Police Department at 979-845-2345.

College Station man accused of online solicitation of a minor

Possession of child pornography is a third-degree felony, punishable by up to 10 years in prison.

The Texas Municipal Power Agency is finalizing an agreement to begin decommissioning the Gibbons Creek Steam Electric Station and Reservoir.

Birx said it is critical to prove in trials that vaccine candidates are safe for a variety of vulnerable populations.

Thursday marked six months since the first positive case of COVID-19 was announced in Brazos County.

Andy and Sondra Andrews of Cameron lost their son, Army 2nd Lt. Darryn Andrews, in 2009 when he was killed while serving in Afghanistan. Andrews died while trying to save his fellow soldiers from and ambush. (Eagle Photo/ Stuart Villanueva)

Photographs chronicle the life of Darryn Andrews, his time as a student at Cameron High School and his wife Julie and their two children, Daylan and Jacey. (Eagle Photo/ Stuart Villanueva)