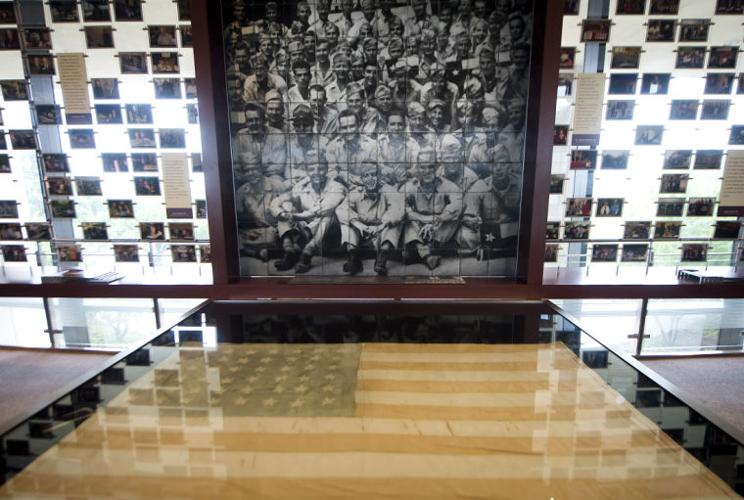 Photographs of former Texas A&M students including those who served in the military adorn a display at the Association of Former Students headquarters at the Clayton Williams Alumni Center. (Eagle Photo/ Stuart Villanueva) 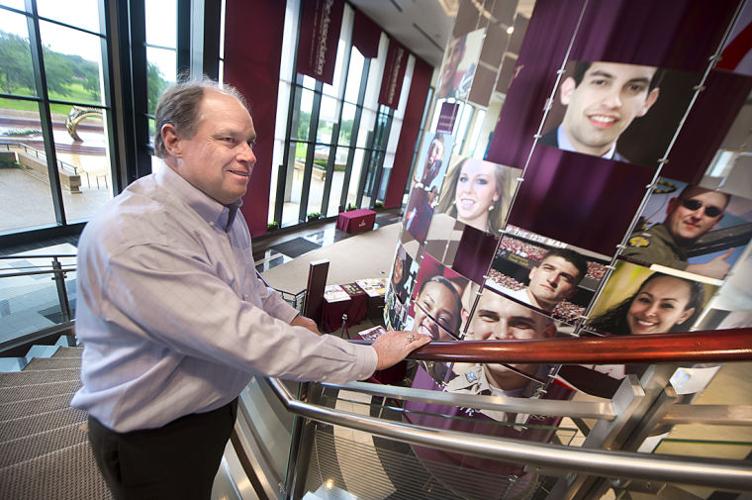 For more than a century, the history and traditions of Texas A&M have followed students into life after Aggieland, says Porter Garner III, president and CEO of The Association of Former Students.

The alumni organization is celebrating its 135th anniversary on Thursday and Garner, class of 1979, said it's true that there's a spirit that can never be told -- you just have to experience it.

"The key asset is that Texas A&M has attracted students that want to be connected. In the past three or four decades a lot of students have come here because of the legend of Texas A&M and the Aggie Network," he said.

Garner said it was probably a lot easier to stay connected with former students when there were only 11 cadets gathering, as opposed to the more than 380,000 living members of The Association.

On June 26, 1879, a group of cadets from the Agricultural and Mechanical College of Texas hosted a reception at the Bachelor's Club in Houston.

Garner said this is where A&M camaraderie was born.

The Ex-Cadets Association was reorganized into an alumni group in 1888 and later ran in tandem with Alpha Phi Fraternity, according to The Association's website. In 1919, the groups were dissolved and The Association of Former Students was formed.

The Association raises millions of dollars -- $8.9 million in 2013 -- to support academic programs and scholarships at the university, student activities, and programs for former students.

It's also the central hub for 244 active A&M Clubs around the world. Aggies can be found in 158 countries, according to The Association.

The building on campus serves as a launching point for the university's history and its future, said Kathryn Greenwade, class of 1988.

"Our former students bring their children and grandchildren here to learn and to be inspired," said Greenwade, vice president of The Association.

Garner, who has served The Association for 36 years, said he's traveled to universities all around the U.S. and hasn't found an organization that engages its alumni like The Association does.

In 2011, a website that tracks information about colleges and alumni networks said The Association was "one of the biggest, most active, and most enthusiastic in the world," ranking it No. 8 in a Top 10 list. The reviewer added that A&M alumni have reached the top of a range of industries.

Garner said that, beyond the camaraderie and history, The Association brings together a network of Aggies to help students find their way upon graduating.

"I think a lot of kids come here for that life after Aggieland," he said.

More than 135 years after the A&M College of Texas was founded, the success and legend of the university and The Association continues to flourish.

Garner said that success has nothing to do with anything The Association has done.

"It's the Spirit of Aggieland," he said.

Digital comics and puzzles are back!

Digital comics, puzzles and columns provided to this website's subscribers are back online after an outage this week.

Photographs of former Texas A&M students including those who served in the military adorn a display at the Association of Former Students headquarters at the Clayton Williams Alumni Center. (Eagle Photo/ Stuart Villanueva)