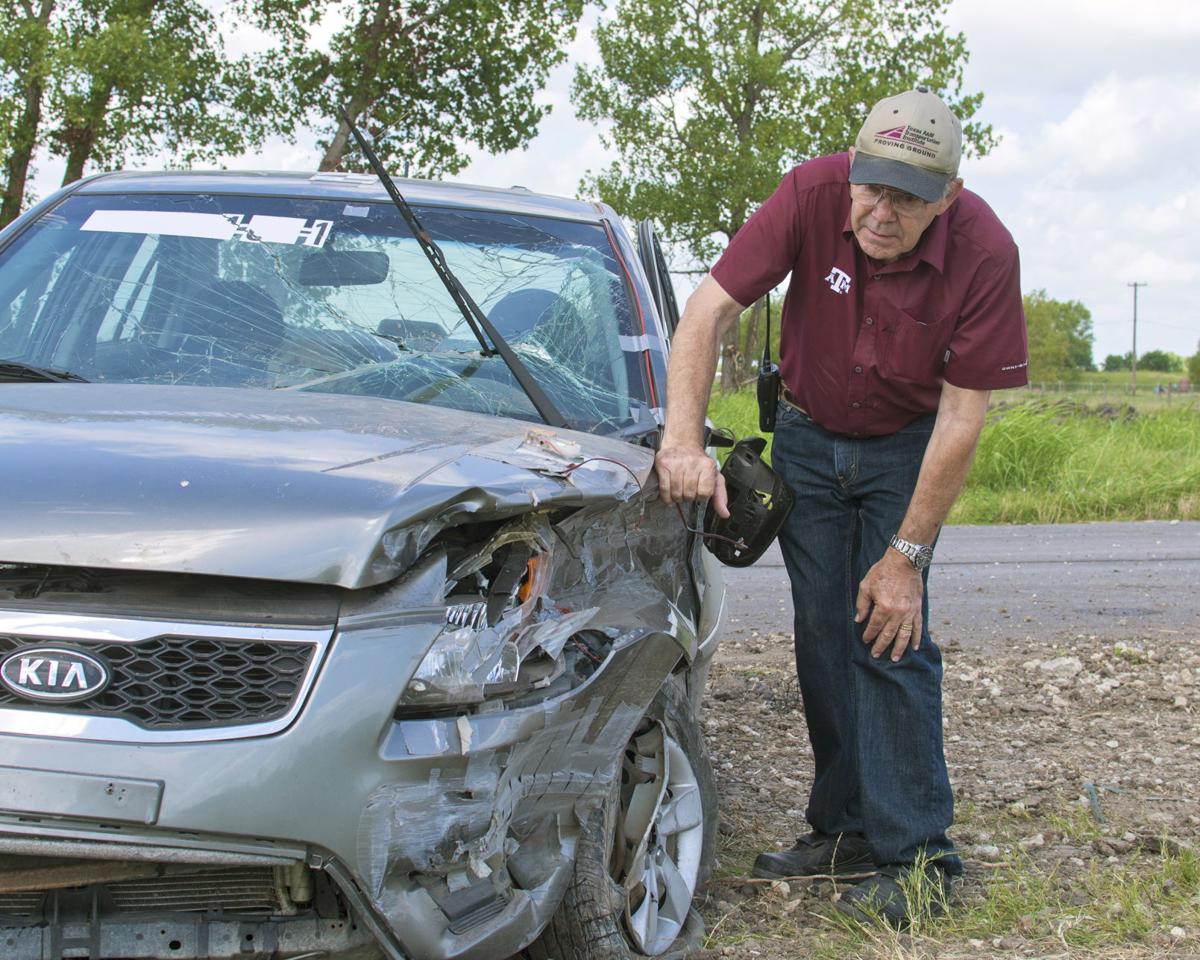 Dick Zimmer studies the aftermath of a crash test at the TTI proving grounds. 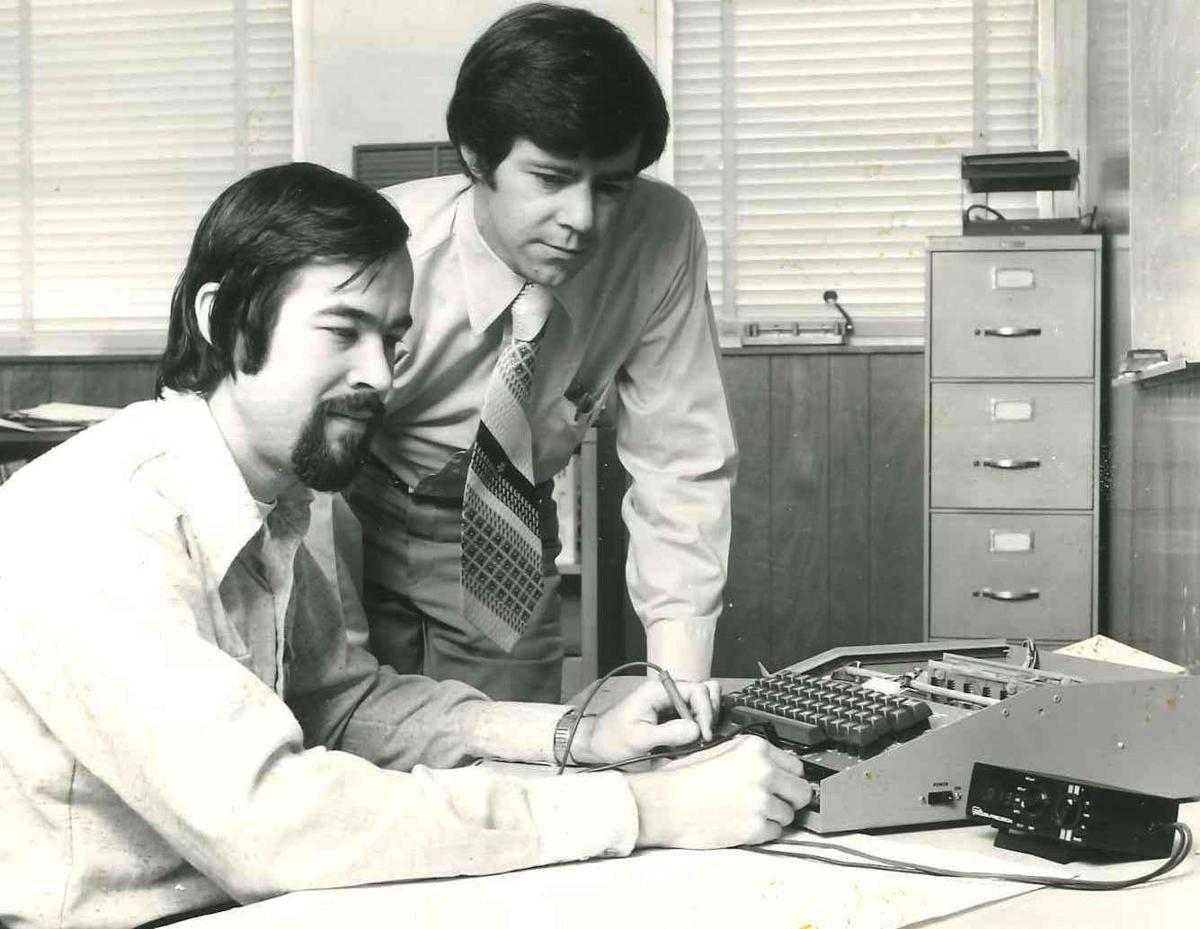 Dick Zimmer with a fellow engineer studying crash-test data at the Texas Transportation Institute Proving Grounds located at what is now the RELLIS Campus. 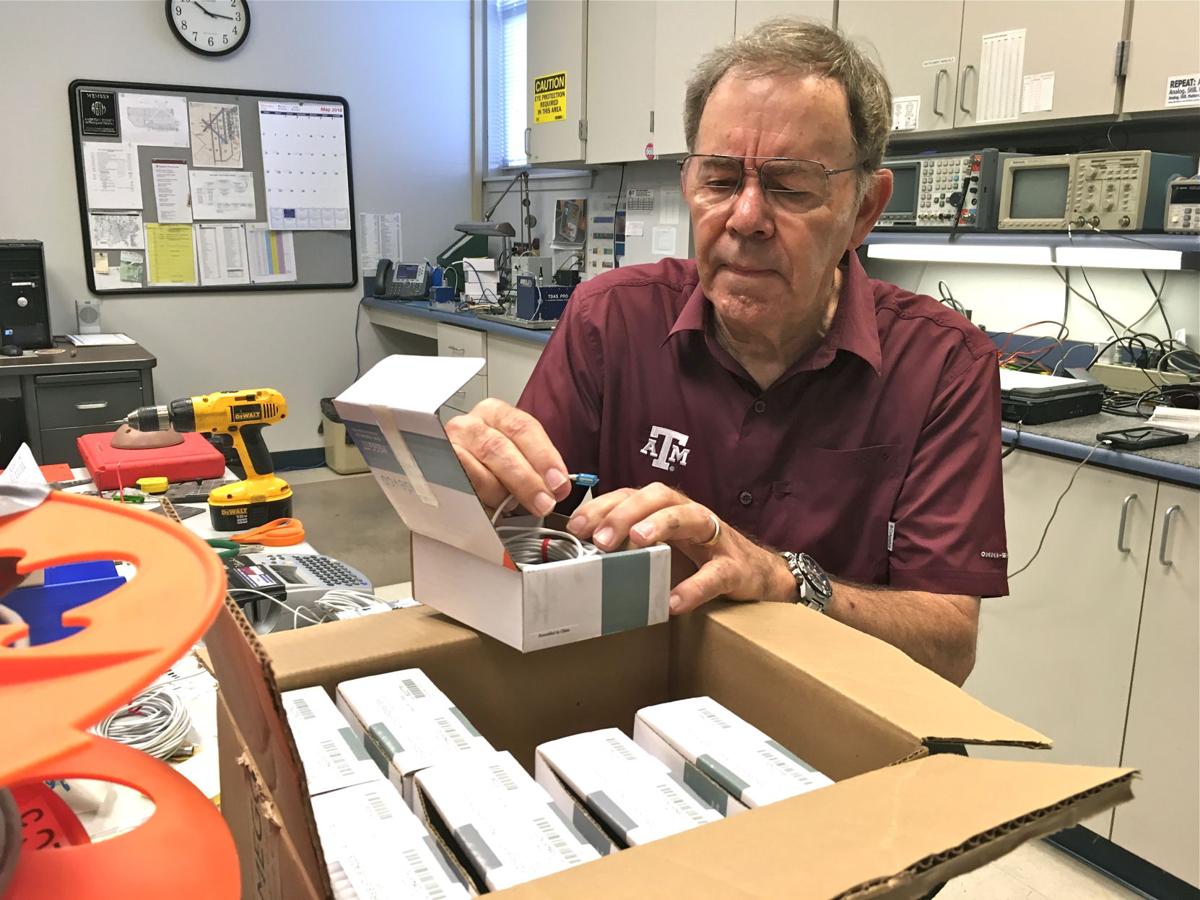 Dick Zimmer in his TTI office located on the RELLIS Campus.

This is one in a series of stories on the history of The Texas A&M University System's RELLIS Campus.

On the afternoon of July 20, 1969 -- a Sunday -- Dick Zimmer sat behind the steering wheel of his VW Bug, driving east along Interstate 10.

Zimmer and his wife, Reta, had left their home in Las Cruces, New Mexico, that morning for College Station, where he would be interviewing for a position with the Texas Transportation Institute.

As he drove, Zimmer kept fussing with his car's radio dial.

"Why don't you find a station and leave it?" Reta asked.

He had a personal interest in the outcome of the historic mission.

But as he tuned up and down the AM dial, mostly what he found while traversing the sparsely populated high-desert country of West Texas was static.

As a systems specialist and former Air Force senior airman from Canton, Ohio, Zimmer was keenly aware that one of the astronauts descending to the lunar surface that day was a fellow Ohio native.

But most Americans, unlike Zimmer, weren't directly involved with the nation's space program.

In the year or so leading up to the launch of Apollo 11, Zimmer worked for the Zia Company, a NASA contractor. He supported the group testing the ascent engine of the lunar lander.

His small part in the colossal undertaking of putting the first humans on the moon helped ensure that astronauts Armstrong and Edwin "Buzz" Aldrin could safely make the return trip home.

And if the mission was accomplished, Zimmer knew the Zia contract would not be renewed.

Thus, the long drive to interview for a new job.

The Apollo 11 moon landing was a success and TTI hired Zimmer later that same year.

Now called the Texas A&M Transportation Institute, TTI's testing site remains located, as it was when Zimmer was first hired, on the grounds of the former Bryan Air Force Base, now called the RELLIS Campus.

But not until recently did Zimmer realize the additional connection he shares with the second man to walk on the moon.

Aldrin spent roughly 90 days at Bryan Air Force Base in the first months of 1952 preparing to become a fighter pilot, a significant step on his personal journey to the moon -- and back home to Earth, thanks in part to Zimmer.

Zimmer's job with the Zia Company saw him assisting in the maintenance and operation of the test stand in which the Lunar Excursion Module's ascent-stage engine was fired at the White Sands Missile Range.

"A 'full-scale' test meant they would put a full-size lunar lander into a large vacuum chamber," explained Zimmer. "The vacuum was created with steam generated by the firing of three X-15 engines.

"In those tests, the LEM engine would ignite and burn for several minutes.

"It wasn't our job to assess the outcome of the tests," Zimmer added, "but to see that they were conducted correctly."

Each of the six lunar landers that ferried astronauts to the surface of the moon returned their crews to the orbiting Command Module for the trip back to Earth.

"We safety got our astronauts home," Zimmer said. "I'm proud of that."

He has remained in the "safety" business ever since.

"My Air Force supervisor, who had helped me get the job in New Mexico, went to work for TTI," Zimmer said. "He wanted me to be a part of his team again, developing instrumentation systems for vehicle crash-testing."

Zimmer began working for TTI in November 1969. He has yet to fully retire.

"I started out as an instrumentation specialist," Zimmer said from the floor of TTI's historic hangar building that serves as a giant garage for the agency's work in Roadside Safety and Physical Security.

The venue was originally constructed as a repository for transient aircraft when it first opened at Bryan Army Air Field in spring 1943.

"What we did," Zimmer recalled of his initial days with TTI, "was mostly crash testing."

A reasonably new pursuit in the quest for greater highway safety.

"In order to collect data from those tests, we had to develop our own equipment," he said. "That was before integrated circuits, before high-speed computers. We used resistors and capacitors and transistors. Real 'low-tech' stuff."

Since 1965, more than 3,000 full-scale crash tests have been conducted at TTI's Proving Grounds Research Facility on the RELLIS Campus. Most of those tests have been performed on the old runways of the former military base.

Those tests have been critical in the development and refinement of highway-safety devices such as guardrails, breakaway signs and barrier systems-designed to make America's roadways safer for motorists.

Today, onboard high-speed digital recorders preserve the abundant and critical information to be gathered in a vehicular-crash scenario. A laptop computer connected to the "blue box" downloads the data.

Technology has come a long way under Zimmer's watch.

"What we first had," Zimmer said, chuckling at his recollection of early crash-testing instrumentation, "was a piece of cable coming out of the back of the vehicle, strung out about a thousand feet to a small trailer that had a tape recorder running on the other end.

"The test vehicle would get up to speed and crash into whatever we were testing and then the cable would follow, swishing back and forth until it piled up under the test car or truck."

Although no quarter-million-mile cables were needed, it still boggles the mind to consider that the same basic technology Zimmer used in the early days of collecting crash-test data for TTI was also employed in sending humans to the moon.

And as historically significant as those journeys were -- highlighting America's "Space Age" achievements -- the studies that Zimmer and his TTI associates continue to perform well into the "Information Age" have been of far greater importance to mankind.

"We're definitely in the 'survival' business," Zimmer said, "making travel on the nation's roadways as safe as possible."

As for what keeps Zimmer "hanging around" TTI after all these years, he credits an atmosphere of creative support.

"I've had great bosses that gave me the freedom to try out crazy ideas," Zimmer said. "They were OK if I made a few mistakes and, if required, they would go to the administration for additional funding."

Zimmer first learned of his additional connection to Aldrin only last year after members of the team working on the redevelopment of the RELLIS Campus began looking for matters of historical significance at the site.

There is no question of Aldrin's place in history, both locally and internationally, but Zimmer and the Texas A&M Transportation Institute deserve recognition, too, given the countless lives saved by findings from the controlled crash tests performed on the RELLIS Campus site.

RELLIS Recollections: Baboons, bovines and bees: A part of RELLIS history, too

Texas A&M's programs often involve animals, so it's no surprise to find them on campus, whether it's cows, horses or honey bees.

The closure of Bryan Army Air Field at the conclusion of World War II was a major economic blow to the area.

There was a time in America when a boy's interest turned to cars rather than computer games, smartphone texts or Instagram.

Last night at Avenger Field in Sweetwater, a sellout crowd of more than 300 attended a dinner and memorial service at the National WASP World …

They don't make local sportswriters -- or sports stories -- like they used to.

RELLIS Recollections: Bryan Field officer flew into a tropical storm on a bet

The world's first "hurricane hunter" made his maiden voyage from a rather unlikely place and for an unlikely reason.

Dick Zimmer studies the aftermath of a crash test at the TTI proving grounds.

Dick Zimmer with a fellow engineer studying crash-test data at the Texas Transportation Institute Proving Grounds located at what is now the RELLIS Campus.

Dick Zimmer in his TTI office located on the RELLIS Campus.