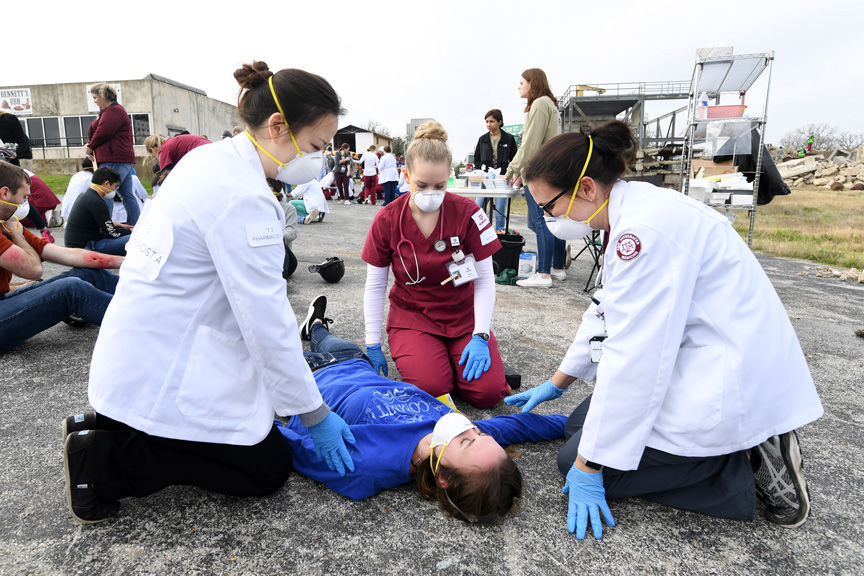 Students playing the roles of responders triage a "victim" of a mock chemical explosion and building collapse during Texas A&M's Disaster Day on Friday. 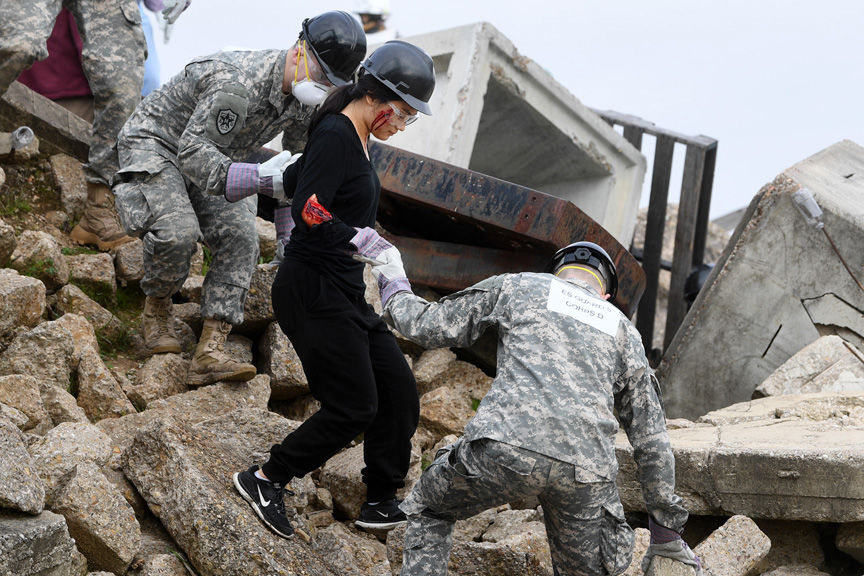 Members of Texas A&M's Corps of Cadets help extract a "victim" from a rubble pile as students participate in a large-scale emergency response simulation on Friday during Disaster Day. 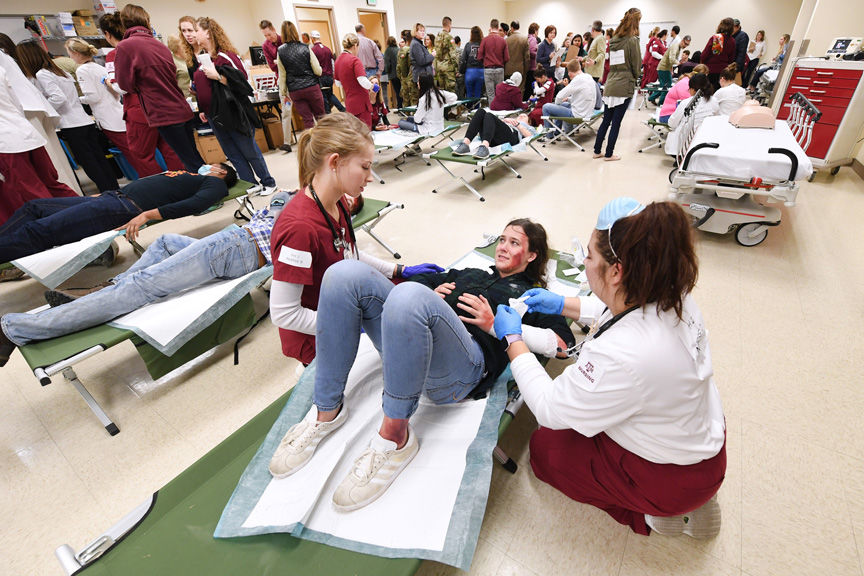 "Patients" are treated in a mock field hospital as Texas A&M students respond to a large-scale emergency simulation on Friday during Disaster Day.

Corps of Cadets members waded through rubble to rescue student actors wearing elaborate makeup designed to mimic wounds. Those cadets then brought victims to health care responders — all part of what university leaders described as the largest student-led inter-professional emergency response simulation in the country. This year’s simulation for the hundreds of student participants was a chemical explosion and subsequent building collapse.

“This is a signature event for the health sciences. Students from all the health professions work together,” Carrie L. Byington, senior vice president of the Health Science Center and dean of the College of Medicine, said Friday from inside the Texas A&M Engineering Extension Service’s Emergency Operations and Training Center.

Some volunteer actors appeared particularly committed to the roles, as many wailed incoherently, gesticulated wildly and otherwise cried for help while responders searched for them at TEEX’s 52-acre Disaster City, which serves as a training facility for thousands of the country’s emergency responders year-round.

“It gives students an opportunity that I think is unique in the nation: That they can train in realistic settings and simulate a true disaster,” added Byington, who is also vice chancellor for health services for the A&M System. Byington also expressed gratitude to TEEX for hosting the annual event.

Braden Efird, an about-to-graduate nursing student, served as the deputy incident commander for the triage center, which was an early stop for the mock victims after being extracted from the disaster site.

“I have three care teams, with a physician, a charge nurse, four nurses, pharmacy and public health in those care teams,” Efird said. She said her teams evaluate each victim’s injuries and condition, as a team would do in a real disaster situation. She said much of the more thorough treatment took place at the simulation’s field hospital.

“I’m making sure my providers are looking for any rashes and evaluating the victim’s mental state, so I can let the emergency operations center know what’s going on and let them know what we’re seeing,” she said.

Efird, who was part of the student planning committee, said most student participants knew very little about the disaster going into the simulation and had to rely on their schooling, as well as each other, to quickly make judgment calls. Faculty served as evaluators and wrote notes as they moved about the various sites within the simulation.

“It’s a time when all of the colleges can work together and figure out each of our roles,” she said.

Before donning a hard hat and entering the mock disaster site, Texas A&M President Michael K. Young praised the student leadership and said the program continues to help students to be prepared for future high-pressure situations.

“We’re able to train people in a more realistic situation, where they can learn not only what their specific role is, but they can begin to sort through the chaos that happens, and organize themselves to be as effective as possible at saving survivors and mitigating impacts and effects,” Young said.

“We really want them to learn and be able to make mistakes here, so in a real disaster, they’ll know what to do,” he said. “They can learn from the ground up. It’s a really powerful learning experience.”

In a release, Nicole Mancuso , a graduate of the College of Nursing, said that involvement in Disaster Day taught her how to appropriately triage and treat patients in mass-casualty scenarios. According to the release, Mancuso was working in a Las Vegas emergency room during the Oct. 1, 2017, mass shooting on the Las Vegas Strip.

“It was probably the worst thing I have ever seen in my life, and I hope I never have to see it again,” Mancuso said in the release. “Having the knowledge of triaging really helped to know who needs more time from me and who is OK in comparison. What I learned at the college built my initial skills to become an emergency room nurse.”

Charles Borrego, a College of Nursing student, was this year’s incident commander for the simulation. Borrego and his deputy, master’s student Andrew Payne, helped coordinate students as they served the mock victims.

“The idea,” Payne said, “is to give the future health care professionals of Texas exposure to a high-fidelity disaster response simulation now so when they deal with situations going forward in their industry, we’ve improved readiness for the state of Texas.”

After 17 weeks of learning everything from the intricacies of the state penal code to courtroom demeanor, from handling a weapon to how to beh…

Just before 2 p.m. Friday, large groups of Texas A&M students and other area residents stood around, laughing and talking under a stunning…

Texas A&M University students participate in Disaster Day on Friday, Feb. 15, 2019, as they play the roles of victims and responders in a …

Lexie Valadez wasn't pregnant, but she gave birth to a beautiful baby doll on Thursday morning.

Students playing the roles of responders triage a "victim" of a mock chemical explosion and building collapse during Texas A&M's Disaster Day on Friday.

Members of Texas A&M's Corps of Cadets help extract a "victim" from a rubble pile as students participate in a large-scale emergency response simulation on Friday during Disaster Day.

"Patients" are treated in a mock field hospital as Texas A&M students respond to a large-scale emergency simulation on Friday during Disaster Day.