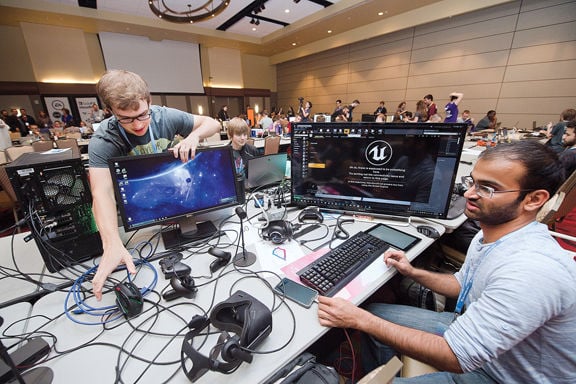 Sean Blonien, left, Travis Lawrence and Aniket Raj get their computers and other equipment ready for the start of competition on Friday during Chillennium, a student-run game jam taking place this weekend at Texas A&M University's Memorial Student Center. Participants have 48 hours to design a video game from scratch. 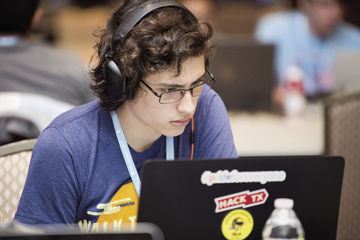 Thomas Crain, a student from the University of Texas at Dallas, is among the visitors to College Station participating in Chillennium.

Hundreds of college students, illuminated by the light of their computer screens, buzzed around the Bethancourt Ballroom in the Memorial Student Center at Texas A&M University to the sound of crinkling food wrappers, the pop and hiss of soda cans and hushed but excited conversations as they rushed to get a head start on their competition.

The Texas A&M department of visualization kicked off its fourth annual student-led video game jam, Chillennium on Friday evening -- prompting the more than 360 participants to begin a 48-hour challenge of developing a game from scratch.

Teams included between one to four members who must plan, design and develop the game using the event's surprise theme of "role reversal," the reveal of which kicked off the competition.

College of Architecture Dean Jorge Vanegas said he is proud of the mission pursued by the event and the students of the visualization department who organize it for challenging their passion to create something worthwhile and meaningful.

Through game development, he said he believes the end product gives the player a way to find enjoyment even in hectic times.

"We like to provide the highest quality of human endeavor," Vanegas said. "We define what we do with verbs…[Chillenium's] verb is play, and that is a verb we cannot forget in the times we live in. That's what connects us to our inner child and will allow us to project ourselves into the future."

The event has seen rapid growth since its inception when more than a dozen students from A&M and Kansas State University gathered for a design competition.

Tyler Padgett, head of the student organizing committee, said this year's event not only solidified the gathering as the largest student-run game jam in North America but also made it an international competition with the addition of teams from two universities in Canada.

André Thomas, lecturer in the department of visualization, CEO of educational game development company Triseum and faculty adviser for Chillenium, said he has been amazed by what the students have achieved with the event in such a short time.

"Everything is by the students, for the student," he said. "It's been amazing to see how far it's come in the last four years."

Looking forward, he said he hopes to continue to see the event grow and become even more prominent.

"Ultimately, we want this to be the premier [student game jam]," Thomas said.

The games created will be submitted by 5:30 p.m. Sunday when they will be judged by a group of industry panelists. Awards will be given to the top three overall teams as well as for specific categories including design, programming, sound and art.

What to expect from the week ahead around Bryan-College Station

Here are some upcoming events and stories around Bryan-College Station that we're watching this week. For more events, visit theeagle.com/calendar.

Sean Blonien, left, Travis Lawrence and Aniket Raj get their computers and other equipment ready for the start of competition on Friday during Chillennium, a student-run game jam taking place this weekend at Texas A&M University's Memorial Student Center. Participants have 48 hours to design a video game from scratch.

Thomas Crain, a student from the University of Texas at Dallas, is among the visitors to College Station participating in Chillennium.