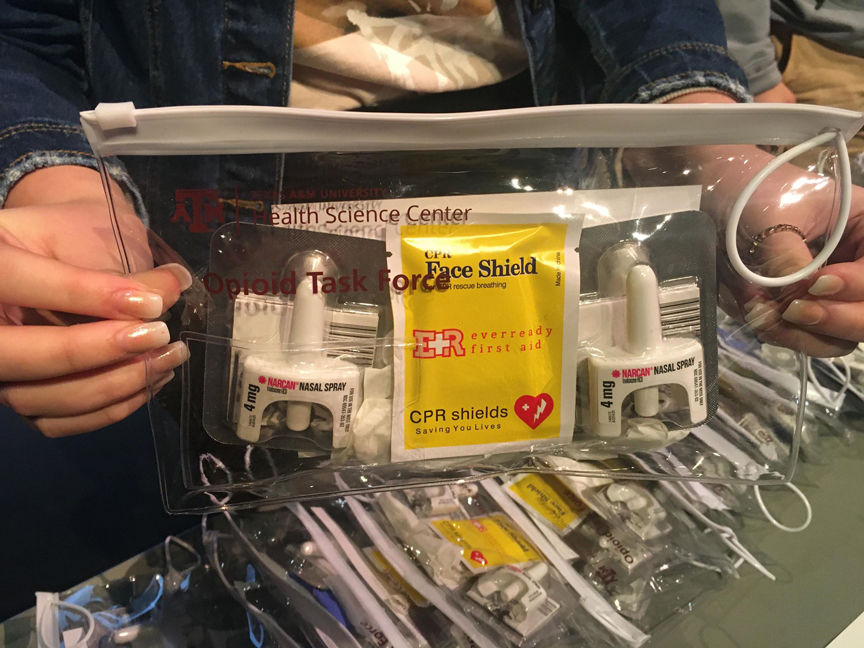 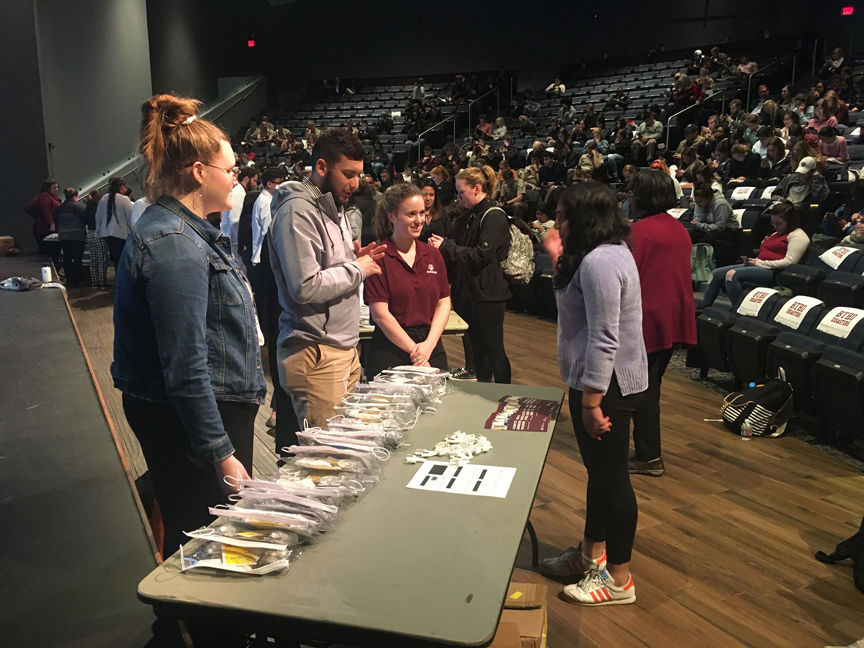 As part of A&M’s Disaster Day week of activities, which are designed to prepare the community for disaster response, more than 400 attendees gathered Tuesday at Rudder Theater, where they learned about the importance and administration of naloxone.

With opioid overdoses becoming more common in the United States, the Texas A&M Health Science Center recently sponsored one of the largest single naloxone training and distribution events in the nation.

As part of A&M’s Disaster Day week of activities, which are designed to prepare the community for disaster response, more than 400 attendees gathered Tuesday at Rudder Theater, where they learned about the importance and administration of naloxone. Those in attendance also were able to receive their own free doses of the overdose-reversal drug, courtesy of the university.

Many suffering opioid addiction will feel so desperate to avoid the pain that comes from withdrawal that they will commit acts they would otherwise never allow themselves to consider, said Dr. Joy Alonzo of A&M’s College of Pharmacy.

“Withdrawal from opioids won’t kill you, but you will wish you were dead,” she said, addressing the large crowd of health science students.

Alonzo, a clinical assistant professor, also is a member of the Opioid Task Force. She and her colleagues help distribute free naloxone to the public to save at-risk opioid users from death.

She noted in her speech Tuesday night that 130 or more people die in the United States each day from opioid overdose. Texas, she pointed out, remains underreported in regards to overdoses and exhibits a lack of data. The state is considered a non-reporter by the Centers for Disease Control, she said. However, more than 30% of all babies in America born with neonatal abstinence syndrome [NAS], a form of drug withdrawal, are born specifically in San Antonio and Bexar County.

On Feb. 8, a 37-year-old man with a needle in his hand was found unconscious on the floor of the restroom at a Bryan restaurant, police said. The man was saved when paramedics arrived and gave the man naloxone. Officers were able to determine the man had injected heroin, according to police reports.

Nearly every American who has endured a dental procedure, broken a bone or given birth has been given an opiate at some point, Alonzo said. Prescribed opiate use forms dependency, which can escalate to addiction. Opioid overdoses can extend from use of heroin, fentanyl or prescribed medication.

Alonzo progressed to discuss naloxone, also known by the brand name Narcan, which often is used to save the life of a person who has overdosed specifically on an opiate. She noted that the drug does not make its recipient high. It can’t be abused, because it activates withdrawal within the recipient.

“The [United States] surgeon general hasn’t come out with a public announcement since he put the skull and crossbones on cigarettes,” Alonzo said. “Just think about that. And he says that everyone should have a Narcan kit. That’s pretty impactful. ... What will happen is, Narcan will reverse everything an opioid done [to the body], meaning the opioid won’t exert its effect anymore.”

The professor explained just how to use the most modern common form of naloxone administration, a 4 milligram nasal spray. She noted that Narcan can be purchased without a prescription for about $150 at many pharmacies, but many nonprofits give the medication away.

Alonzo explained that opioid overdose often happens slowly and can even occur over several hours, as a user begins to feel more tired. Often sufferers die quietly in bed, as though just lying down to take a nap. Alonzo said signs a person has overdosed include a lack of or slowness of breath, difficulty in rousing a person from sleep, dilated pupils, clammy skin and gurgled breathing or snoring.

Alonzo taught students how to administer Narcan and conduct rescue breathing for overdose sufferers, which is slightly different from regular CPR, requiring a breath every five seconds and a dose of naloxone. Mallory Johnson, a senior public health major at A&M and member of the Opioid Task Force, helped her classmates administer the Narcan kits to the students in attendance, asking that each person understood how to use the drug,

“Really we are just checking to make sure students understand the key points about it, that it is a nasal spray and not a permanent solution,” she said. “We’re making sure they would call authorities so an ambulance would come pick [a victim] up.”

Johnson noted that the Opioid Task Force has many more naloxone kits to administer,and can hold opioid response training not only for A&M student groups, but for the Brazos County community at large. For more information, visit health.tamu.edu/opioids/resources.html.

Just before 2 p.m. Friday, large groups of Texas A&M students and other area residents stood around, laughing and talking under a stunning…

As part of A&M’s Disaster Day week of activities, which are designed to prepare the community for disaster response, more than 400 attendees gathered Tuesday at Rudder Theater, where they learned about the importance and administration of naloxone.