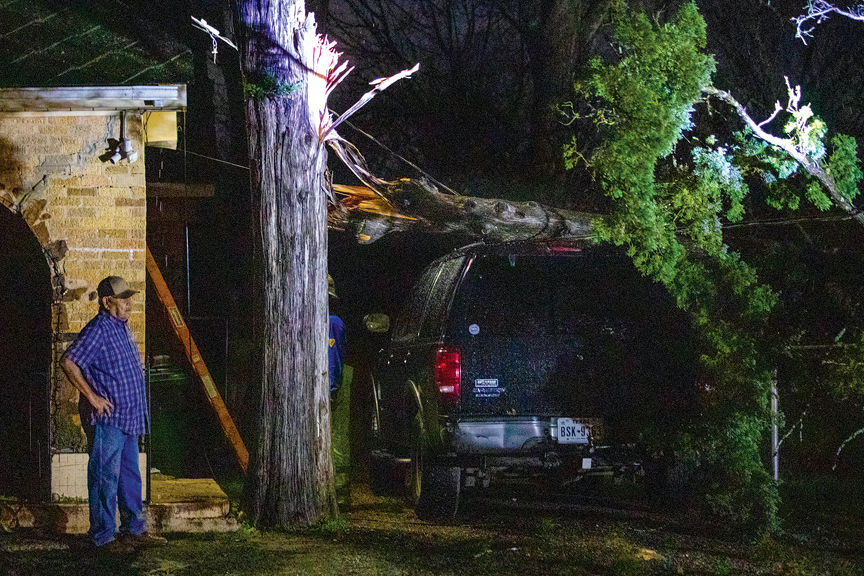 A fallen tree damages power lines and a vehicle near downtown Bryan after storms passed through the area on Friday, Jan. 10, 2020. 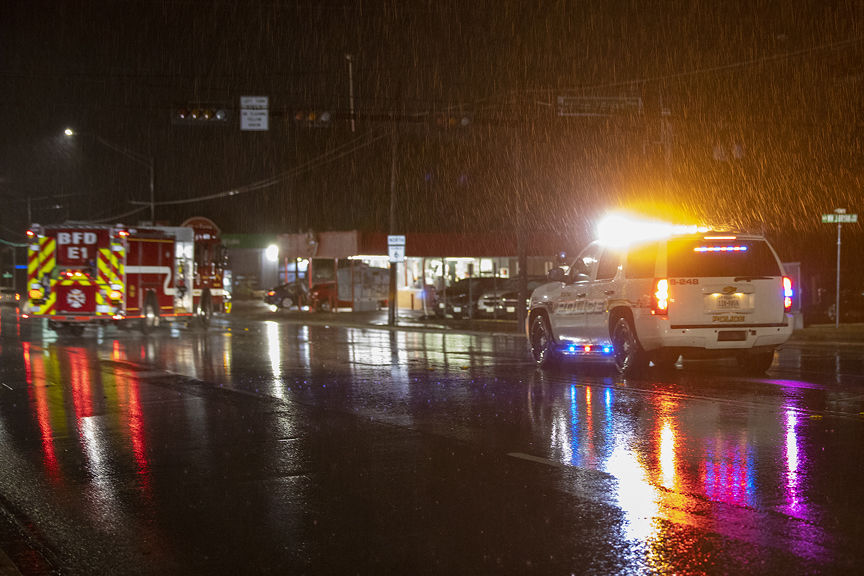 Trees were downed across the Brazos Valley and thousands lost power late Friday after storms walloped the area, bringing winds up to 70 miles per hour.

Around 9:30 p.m. Burleson County was placed under a tornado warning as high winds spread from Deanville into Caldwell and Cooks Point. Burleson County Emergency Management coordinator Duane Strange reported trees down and power lines affected in the northwestern portion of the county near the border with Lee County. He added that a home in Somerville had been impacted by a downed power line, and Somerville ISD’s Yegua gymnasium, which is used as an activity center, experienced significant roof damage from the wind.

Scanner traffic indicated power lines were down across Brazos County, as well as numerous reports of downed trees. Brazos County Office of Emergency Management Deputy Jason Ware reported some structural damage on Oak Hollow Drive in Bryan and on FM 1179 in Bryan.

Washington County officials reported no major damage, but according to Bluebonnet Electric’s website, more than 400 customers were without power near Brenham.

While officials in Grimes, Robertson, Milam and Madison counties, reported no major damage, there were reports of downed trees in Leon County at around 11 p.m.

The storms were part of a line that sped across Texas on Friday, affecting the Dallas, San Antonio, Austin and Houston areas.

Earlier in the afternoon, a tornado destroyed two homes near Fair Play, Missouri, about 35 miles northwest of Springfield. The Missouri State Highway Patrol said no injuries were reported.

Shortly before 3 p.m., a tornado stripped the shingles from the roof of a home near Tahlequah, Oklahoma, about 60 miles southeast of Tulsa. No injuries were reported there either.

What the NWS described as “a confirmed large and extremely dangerous tornado” roared through parts of Logan County, Arkansas, about 45 miles east of Fort Smith on Friday night.

At least three homes were destroyed by the Arkansas tornado, said Logan County Emergency Management Coordinator Tobi Miller, but no injuries were reported.

“At the state level, we continue to closely monitor this storm system, while making all necessary preparations,” Ivey said in a statement. “I encourage all Alabamians to do the same, stay weather aware and heed all local warnings.”

Severe storms sweeping across southern portions of the U.S. and up into the Midwest were blamed Saturday in the deaths of at least 11 people, …

A storm system expected to strike states from Texas to Georgia this weekend is looking more and more menacing, bringing the potential for deva…

Much of the Brazos Valley is under an enhanced risk for severe weather starting Friday, with threats of damaging winds, tornadoes and hail. Th…

A fallen tree damages power lines and a vehicle near downtown Bryan after storms passed through the area on Friday, Jan. 10, 2020.