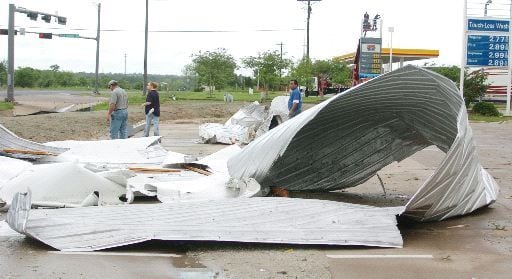 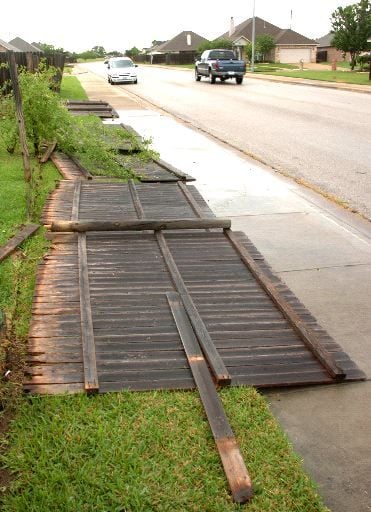 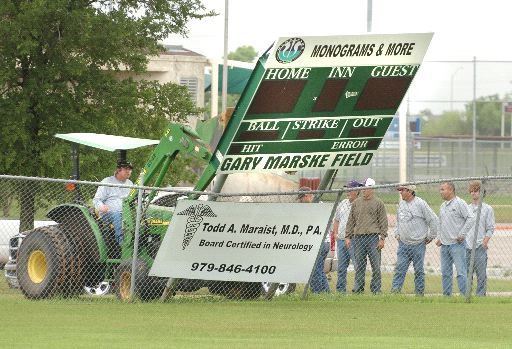 Two tornadoes may have touched down — one in south College Station, the other in Burleson County just east of Snook — early Wednesday, but officials with the National Weather Service said they’re on the scene trying to confirm whether the before-dawn storm did indeed bring twisters.

“Everything that I’ve seen indicates that it was [a tornado],” said Assistant Police Chief Larry Johnson, adding the damage included part of the roof at a school being ripped off, pieces of the roof being stripped off a hospital and similar damage at several businesses along Rock Prairie and Wellborn roads.

Johnson said no injuries were reported and there was minimal damage, like missing shingles, to an unknown number of homes in the area. A few vehicles were damaged by flying debris.

Trees, which were up-rooted throughout the area, blocked portions of Victoria Road and access to A&M Consolidated Middle School, while another crushed a car in a trailer park on West Rock Prairie Road near North Dowling Road.

The businesses along Rock Prairie and Wellborn roads sustained the most damage, Johnson said. The front of the Dollar General store on Wellborn Road was caved in and Wellborn Road Veterinary Medical Center was missing most of its roof.

Kim Layton, head receptionist at the Wellborn Road veterinary clinic, said that no employees were inside when the storm hit and none of the animals at the clinic were injured.

“We are very, very fortunate that none of the patients here in the hospital or any employees were affected,” Layton said. “[The animals] got a little scared and wet, but other than that, everybody was fine.”

Layton said that crews were working early Wednesday afternoon to replace the roof of the clinic. More than three quarters of the roof had been blown off during the storm, she said.

The clinic was closed for the day and owners of patients being boarded there were asked to pick up their pets, Layton said.

Damaged backyard fences let loose dozens of pets in southwest College Station, and officials with the Brazos Animal Shelter said they’re preparing to be flooded with lost pets and owners in search of their pets.

Those looking for lost pets can call the shelter at 775-5755. Pets without a microchip or other identification have to be claimed in person at the shelter.

The hospital didn’t sustain any major damage and there were no power outages, Purl said.

Banners hanging outside the building, along with about 650 feet of roofing, blew away while windows were blown out of cars parked in an employee’s lot, Purl said. One hospital window was broken out, but has since been fixed, she said.

Ann Ganter, a spokeswoman for College Station schools, said windows were broken and the roof was peeled off on the far end of a wing at the campus where 700 students are enrolled. Students were moved to classrooms and lecture halls not impacted by the storm.

Ganter said administrators had been working to assess the damage since 4:30 a.m. Wednesday and were in the process of estimating what it will cost to fix the problems.

“Class is on as usual,” she said. “We’ve sectioned it off so the kids can’t get to the parts that are damaged.”

Officials said they were amazed no injuries were reported from the storm that twirled through Brazos County and Burleson County where high winds wreaked havoc half an hour prior to the College Station storm, damaging several mobile homes and a constables’ car parked in his driveway.

Portions of County Road 128 in that area were closed Wednesday morning as authorities worked to remove trees that blocked the roadway, Prescott said.

He said he thought the damage was the result of a combination of straight-line winds and rotating winds that could have been a small tornado.

While Brazos Valley was hit by the storm, it didn’t require the services of the College Station-based urban search and rescue team Texas Task Force 1.

Almost 85 team members, however, were deployed to Eagle Pass after a tornado killed six and injured dozens more Tuesday evening in the border community about 150 miles southwest of San Antonio.

The Type 1 heavy structural collapse team left at 8 a.m. Wednesday to assist local emergency responders and National Guard troops in searching for victims. A smaller sub-unit of Texas Task Force 1, called a Rapid Assessment Team, was deployed to the area just after midnight.

Texas Task Force 1 was activated by the Governor’s Division of Emergency Management on Tuesday and was staged in College Station in preparation for deployment as severe thunderstorms hit the state late yesterday and early this morning.

With Friday’s new cases, the county’s overall number of cases recorded since the pandemic began rose to 23,766. Last week, there were 113 new cases, compared to 81 this week, showing a 28.31% decline in new cases.

During her almost 50 years in B-CS, Hazen has touched nearly every corner of the community, improving the cities one selfless act at a time.

Banks settles into new position as president of Texas A&M

M. Katherine Banks’ first couple of weeks as president of Texas A&M have been spent meeting with deans, selecting university leadership an…

Pamela Beachum stood Thursday morning on the shoreline of Lake Mexia and gazed across an inlet while her mother sat in the car with the air conditioning on full blast.

Texas A&M University’s diversity, equity and inclusion efforts will now be overseen by senior professor Frank Ashley, who said multiple positions he has held in his three decades at the school have prepared him well for this new task.

A Bryan man who made threats to a nurse who works at the Brazos County jail was sentenced to 20 years in prison this week, officials said.

Brazos Valley residents will have a variety of local opportunities to commemorate Juneteenth, the Texas-based annual celebration of the announcement of the end of slavery in the United States.