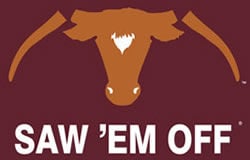 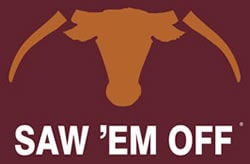 After more than half a year of legal wrangling, it ultimately came down to a pair of bovine nostrils and a patch of white fur.

That is what now distinguishes the trademarked University of Texas Longhorn logo and "Saw 'Em Off" merchandise sold by a College Station business that since December has been the subject of an Austin-based lawsuit.

The trademark infringement suit - which the University of Texas System filed against Fadi Kalaouze, owner of Aggieland Outfitters and parent company Kalcorp - was settled Monday when the businessman agreed to pay a $25,000 settlement fee along with the nose job and hair plugs.

Until now, the only thing that distinguished UT's orange Longhorn silhouette logo from Kalaouze's merchandise was the fact that the animal's horns were detached - a reference to "Saw varsity's horns off," a line in the Aggie War Hymn.

But that's all that was ever needed to distinguish the two, according to attorney Allan Van Fleet, who represented Kalaouze.

Kalaouze, who said he has spent $210,000 responding to the lawsuit, will pay no royalties to the University of Texas and admitted no wrongdoing, according to the settlement. The university agreed not to pursue further litigation regarding the "Saw 'Em Off" logo, the settlement states.

Louis Pirkey, an attorney who represented the University of Texas System, said the school simply wanted Kalaouze to use a Longhorn image that was distinguishable from UT's trademark.

"We told him from the get-go ... that we had no objection to his using a Longhorn logo with the horns sawed off," he said. "What we had a problem with was him using our particular logo."

Pirkey said the modifications to the logo make it clear that it is not supported by UT.

"I think when people see this one, they will understand and realize that this is not our logo," he said. "This is some other Longhorn logo."

Kalaouze said he is in the process of obtaining a trademark and license for the new "Saw 'Em Off" logo, which was developed by artists at his company. He said that the artists came up with several variations of the "Saw 'Em Off" logo and the two parties reached an agreement on which one would be used.

According to Aggie lore, the University of Texas' Longhorn mascot, Bevo, had a patch of white fur, or blaze, on its forehead when a group of Texas A&M students branded the steer with the 13-0 score of a football game between the rival universities.

"It's closer to the origin of Bevo," Kalaouze said. "It's something with two colors so we can make it more fashionable. We can make it look nicer. That's why we feel we really won."

The settlement requires Kalaouze to immediately stop producing any more merchandise containing the disputed logo but allows the company for the next three months to sell products containing the original logo that were already in inventory.

Van Fleet said that their defense claimed the logo was a parody, which is protected under the Constitution.

"The First Amendment, among other things, protects the rights of citizens to poke fun at the rich, the powerful and the government, all of which is [the University of Texas]," he said.

Pirkey, however, said the university was simply trying to protect its "multi-million dollar asset."

"We felt like it was necessary to take action here," he said. "Even though the schools are rivals athletically, both of them have an interest in protecting their trademarks."

A&M also has been litigious over its trademarks in recent years - most notably in 2006, when the university filed a temporary restraining order against the Seattle Seahawks less than a week before the NFL team was scheduled to compete in the Super Bowl. The team unlawfully used the "12th Man" slogan - trademarked by A&M in 1990 - in merchandise, the suit alleged.

Shortly after UT's lawsuit was filed, Aggieland Outfitters began selling "Save Saw 'Em Off" T-shirts to raise money for its legal fees. Kalaouze must immediately cease sales of merchandise that implies or states it is being sold to raise money for the company's legal defense, according to the settlement.

Proceeds from those sales in excess of Kalaouze's legal fees, costs and expenses must be donated to a tax-exempt charity associated with Texas A&M University, the settlement states.

But Kalaouze said that the company's legal defense fund had raised $80,000 through T-shirt sales and other donations - not enough to match the money spent on his defense. And it would have cost him hundreds of thousands of dollars more to continue fighting the lawsuit, he estimated Monday, explaining his motivation to negotiate with the university.

"Without the Aggies' help, we could not have made it ourselves," he said, adding that he is happy with the settlement and ready to move on. "Aggies can wear this for generations to come, and nobody can stop them.

"We really saved the tradition. We saved the logo."

1 dead after three-vehicle crash near Navasota