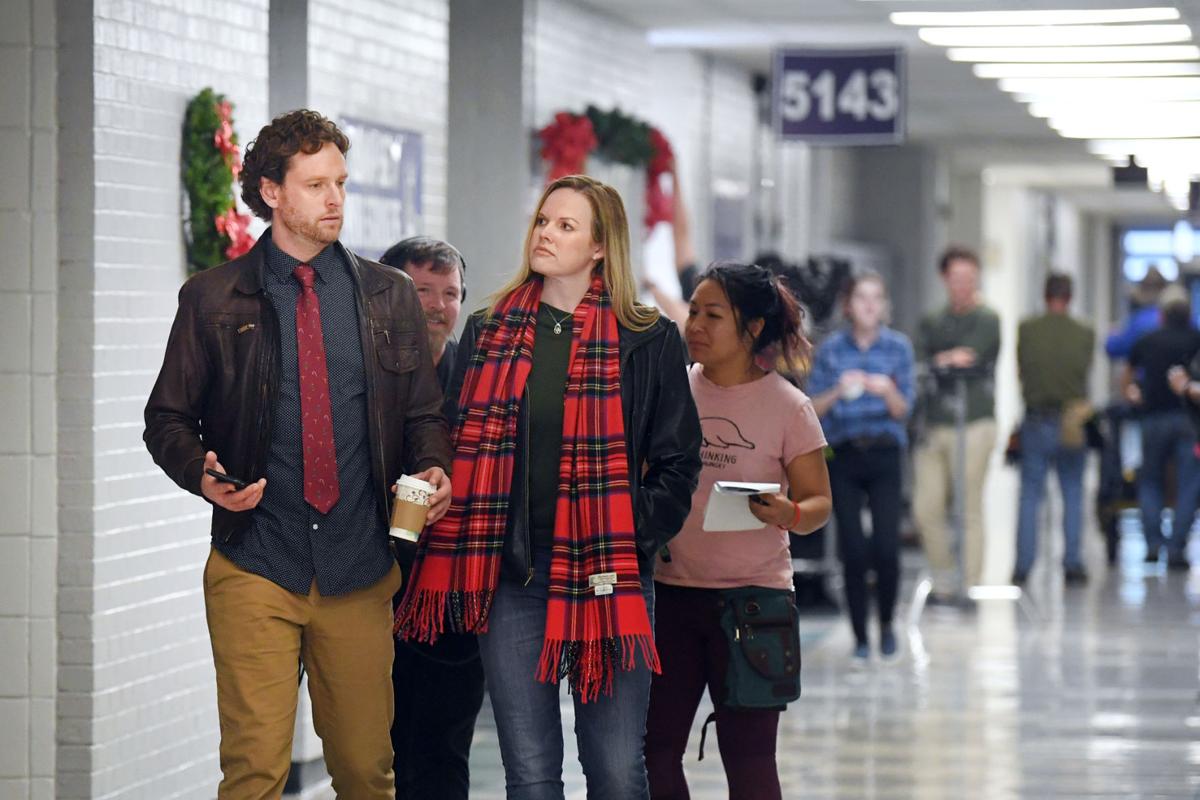 Bryan natives Michael Patrick Lane and Ashley Atwood discuss a scene as they walk down a hallway inside Bryan High School while filming Rekindling Christmas on Jan. 7. 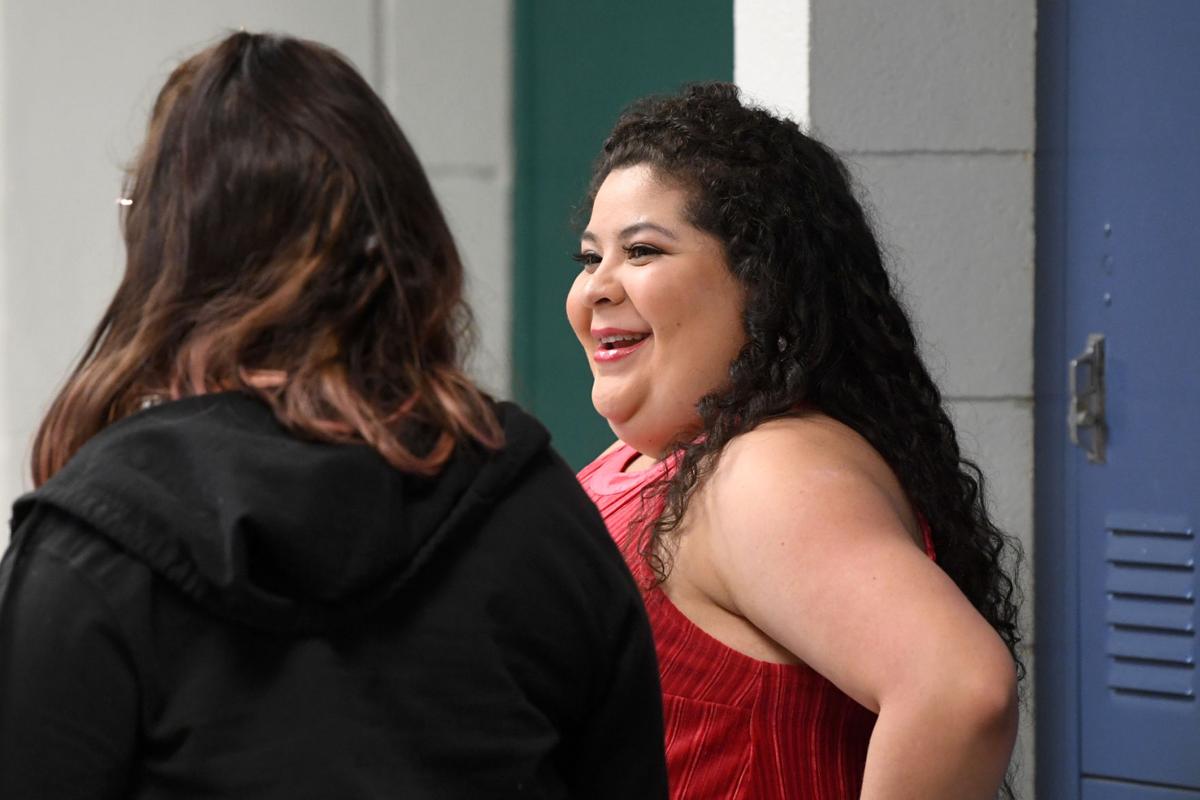 Actress Raini Rodriguez, a Bryan native, chats with a makeup artist during a break in filming the holiday movie Rekindling Christmas at Bryan High School on Jan. 7. 2020. 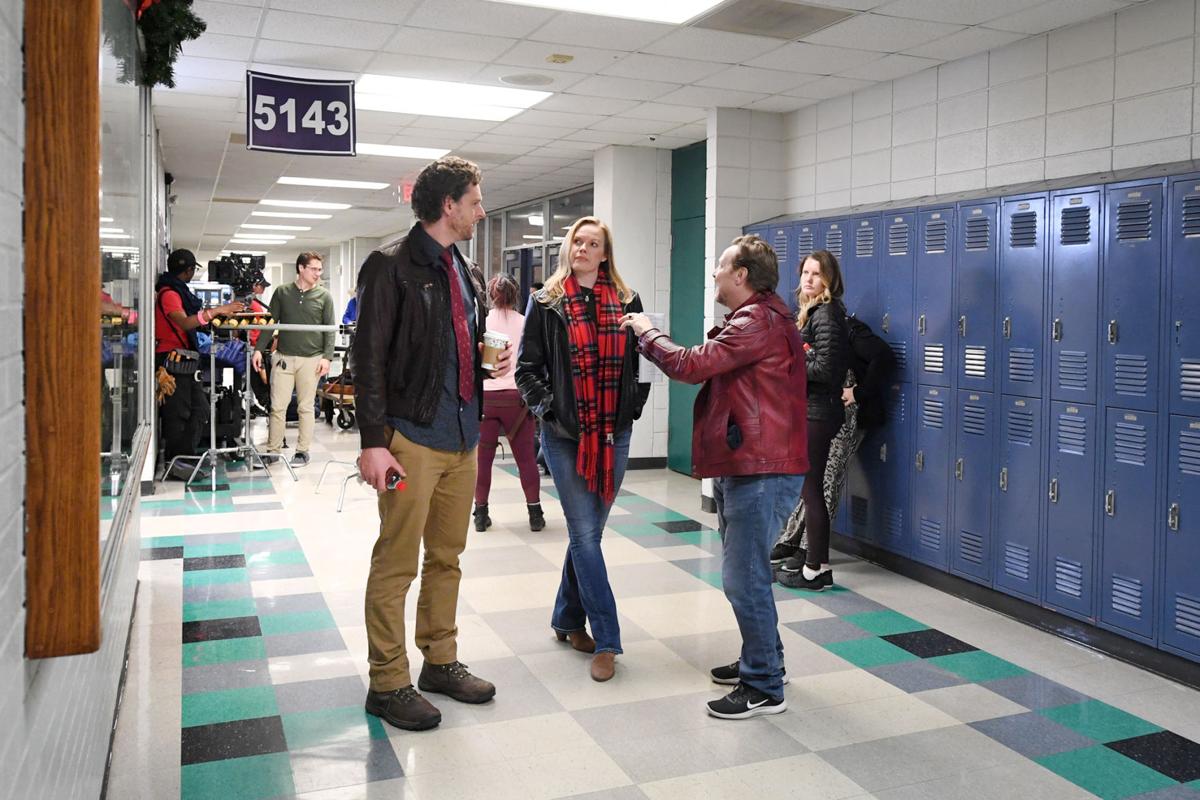 The people of Bryan who helped create Rekindling Christmas when it filmed in and around the city in January 2020 can now say they are part of an Emmy-nominated film.

The holiday movie is among the five nominees in the Outstanding Daytime Fiction Program at the Daytime Emmy Awards taking place next week. The Daytime Emmys, which is put on by the National Academy of Television Arts and Sciences, recognizes made-for-television projects intended for the before-5 p.m. time slots as well as digital streaming films. The after-5 p.m. productions are honored during the Primetime Emmys.

“We’re just so proud and happy,” producer, lead actress and Bryan native Ashley Atwood said. “We could not have done it without every single person that participated in this program, even if you just showed up for that first day with the drones in Downtown Bryan for that First Friday.”

Atwood suggested filming in her hometown, and after seeing the city and the community’s support, she said, director James Ganiere changed the setting of the film from a fictional town in Colorado to Bryan.

“Even though the odds are stacked against us, like, I’m gonna bet on us because I believe in this team wholeheartedly,” he said. The odds were stacked against them for filming the movie with a limited budget and time and also for any nominations because of the stigma placed on Christmas movies, he said.

Atwood said the story, written by Ganiere’s wife, Rebekah, sets the movie apart from the rest of the Christmas genre because it deals with real struggles of love and loss during the holidays that people can relate to.

Michael Patrick Lane, the lead actor in the movie and a Bryan-College Station native, said, the best part about the nomination is that it is for the film as a whole, not one particular person.

“It’s pretty incredible to be one of five films within this category,” he said. “What’s fun about this is you’re being recognized for your work; everyone is being recognized for their work, and it’s really just, I don’t know, it touches my heart. It’s cool because you do projects out of passion and love and you put everything you can into it.”

The project did not have the budget of some of the other nominees in the category, he said, but it is able to compete with those bigger films because of the community’s willingness to help and support the film.

“Our locations were incredible, and it really made everything stand out because Bryan gave us full access,” he said.

Raini Rodriguez, also a Bryan native starring in the film, said no matter what the outcome on July 18, it is an honor to receive the nomination.

“To sort of be able to bring Hollywood back to Bryan and to know that all of these people that watched our film on the nomination ballot, they saw Bryan, Texas,” she said. “They saw the essence; they saw the people; they saw the community, and you can feel that throughout the movie. You can feel the love. … To know that my peers recognized that is so phenomenal.”

The Daytime Lifestyle Programming Emmy Awards will be presented July 18 at 7 p.m. at watch.theemmys.tv. There also will be a telecast of the Daytime Emmys on July 25.

US to require COVID-19 shots for foreign visitors

Waco's 10th Court of Appeals sided with two motorists whose vehicles were towed outside a prominent College Station watering hole despite paying to park, ruling that the towing company was wrong to haul the cars away.

Brazos County health officials reported 86 new cases of COVID-19 among county residents on Friday, with the number of active cases in the coun…

The Bryan school board this week approved changes to the district’s student handbook and code of conduct, eliminating pronouns from the docume…

Brazos County health officials reported 42 new cases of COVID-19 among county residents on Monday, with the number of active cases in the coun…

Brazos County health officials reported 65 new cases of COVID-19 among county residents on Tuesday. The number of active cases of the virus in…

The active COVID-19 case count in Brazos County neared 500 on Friday amid a local, state and national surge in virus cases. The 479 active cas…

With students returning to Bryan and College Station classrooms in just more than two weeks, both school districts are working with the local …

The number of Americans living with Alzheimer's is growing

It is easy to lose track of other major public health concerns while the news covers the ongoing threat posed by COVID-19. Yet the list of oth…

Bryan natives Michael Patrick Lane and Ashley Atwood discuss a scene as they walk down a hallway inside Bryan High School while filming Rekindling Christmas on Jan. 7.

Actress Raini Rodriguez, a Bryan native, chats with a makeup artist during a break in filming the holiday movie Rekindling Christmas at Bryan High School on Jan. 7. 2020.