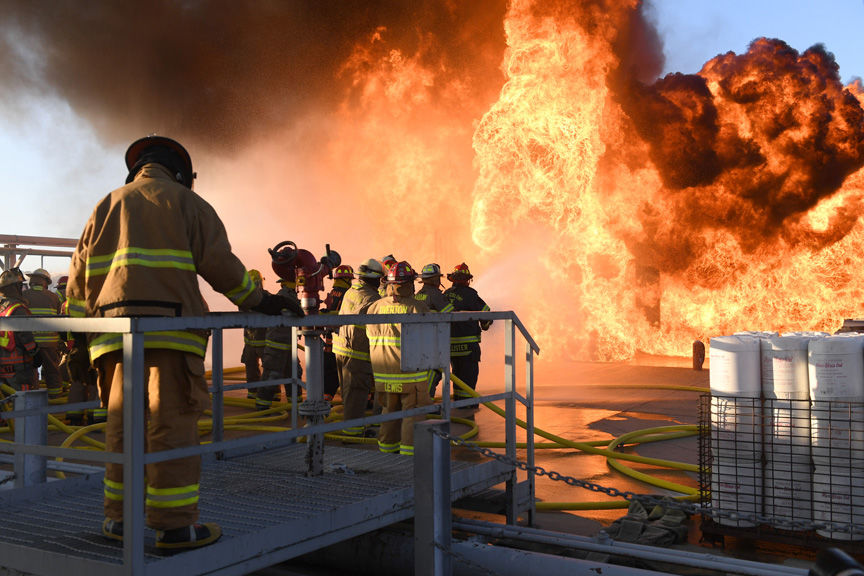 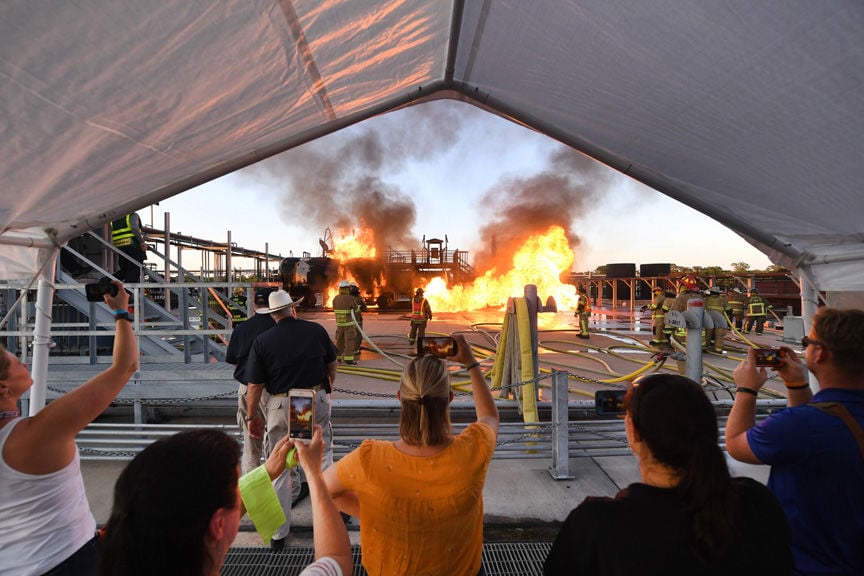 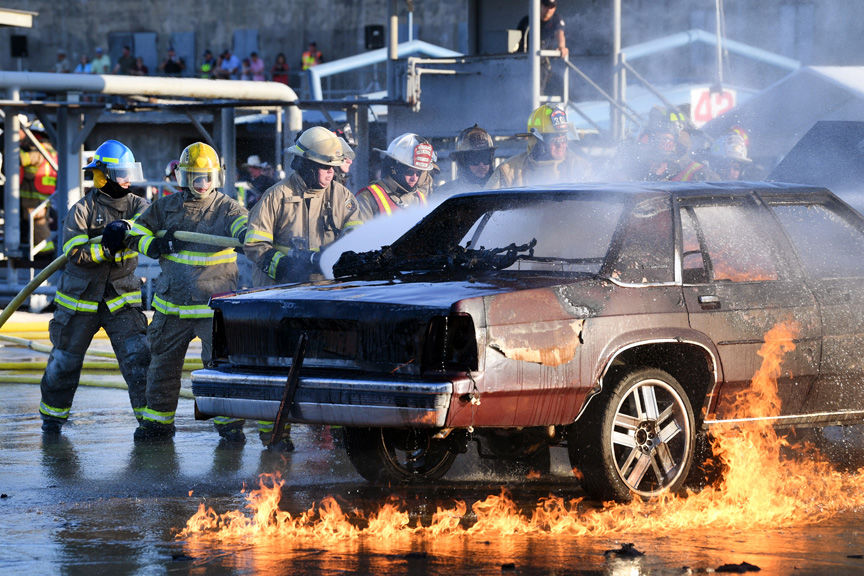 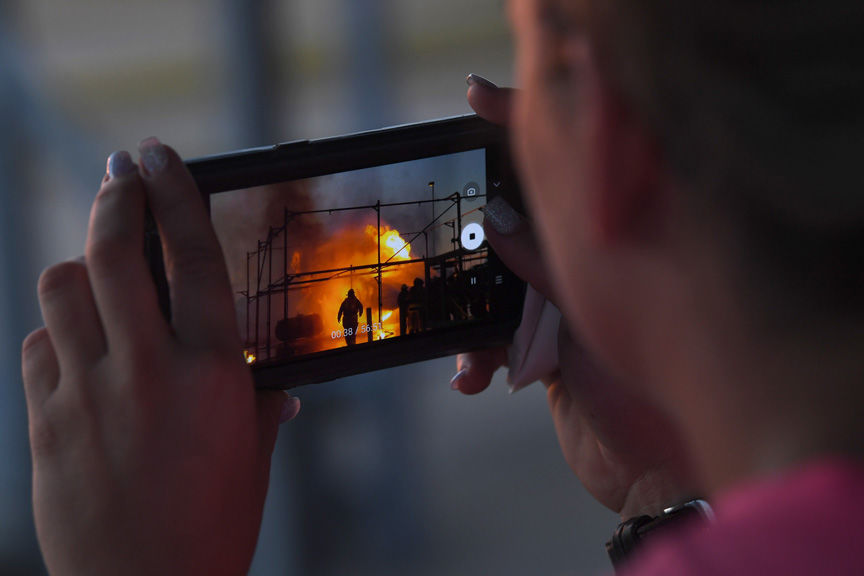 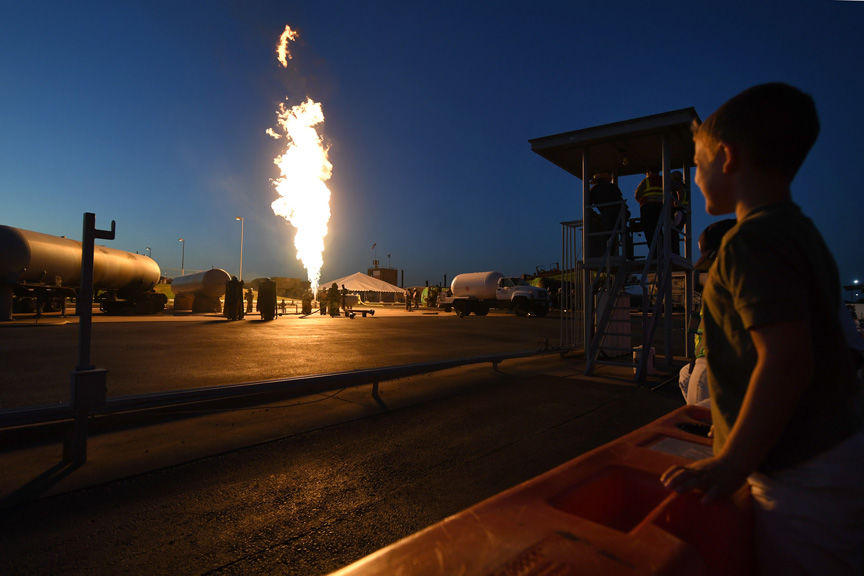 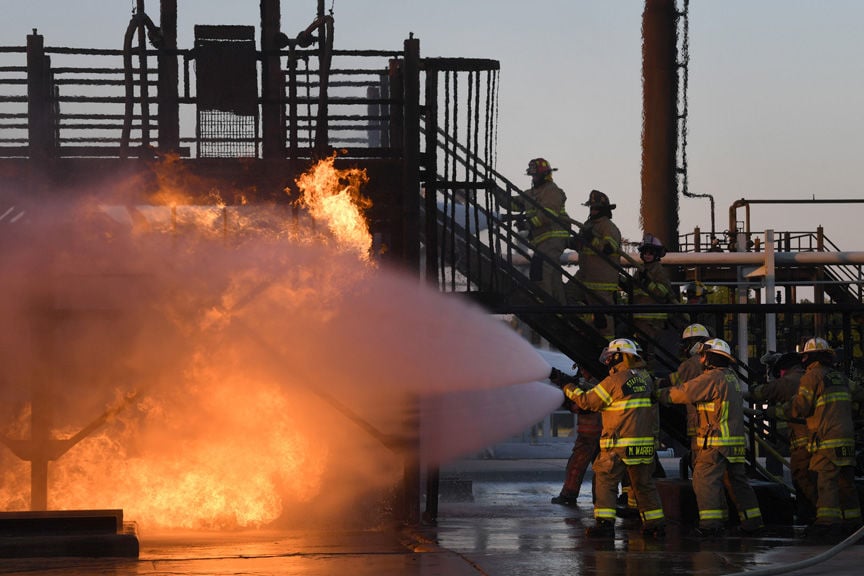 The spray of firefighters’ hoses misting down onto the crowd of more than 2,000 was just part of the annual Municipal Fire Training School public demonstration night.

The fire school’s instructors showed off their skills on eight large props Wednesday, Approximately 1,400 men and women from fire departments across the state and beyond attended the municipal school this week, with 461 guest instructors leading training sessions.

“We teach municipal workers about different types of burns, like liquid three-dimensional fires, pressure fires, or fires with different fuels,” he said. “We want to teach them about every type of fire they may encounter, as well as different types of methods of extinguishing.”

It’s the first year at the Fire Training School for Veronica Collins of the Whitney Fire Department. She said she hasn’t had much experience in the industrial fires seen Wednesday.

“The most I’ve done [involved] getting someone out of a grain trailer,” she said. “I’ve never seen anything like this.”

Collins’ fire chief, Wayland Price, attended Wednesday night with his colleague. Price has been an instructor at TEEX’s summer schools for 17 years and has experience working industrial fires.

“Now that the oil boom has made it to Whitney, we have various oil heads that could catch fire,” he said.

Price invited Collins to attend the municipal school to gain credits toward becoming a trainer, and he said he hopes to bring more firefighters from the department to TEEX in the future.

“My goal is to go back to train my own academy alumni,” Collins said. “... I think TEEX’s [training field] is really good, and it has a lot of stuff that in rural areas we wouldn’t encounter. But, if we were called to something like the West fertilizer plant [explosion], we would have some experience with a plant or refinery.”

Murphy Fire Department colleagues Zach Hagstrom and Ben Frank stood far back from a propane tank fire that lit the night sky like a candle, as the crowd around them ooh’ed and aah’ed. Hagstrom, who has been taking upper level courses this week, had the opportunity to fight such a propane fire in a controlled exercise earlier in the week. The two noted that although the town of Murphy has few industrial structures, the industrial portion of their municipal courses could still be important.

“It’s a residential area,” Frank said. “We do have some light commercial structures. But, we’re mutual aid for the Wylie Fire Department, and they have a lot more commercial and industrial buildings, like water treatment plants, train intermodals, and we can assist there.”

Hagstrom said he had never seen anything larger than a car fire or house fire before this week and his time in College Station would help him to lead others.

“It’s amazing how much hands-on experience TEEX allows you to have, and the instructors are able to guide you through courses in a way that makes it safe,” Hagstrom said. “It’s great to watch the younger guys go through the props, and TEEX has just been tremendous for training.”

The Texas A&M Engineering Extension Service has canceled the 2020 Industrial and Municipal Annual Fire Schools because of the COVID-19 pandemic.