People shield their faces from wind and sand on Monday on the North Packery Channel Jetty in Corpus Christi. Lifeguards patrolled the beach to warn people of the conditions ahead of a storm in the Gulf making landfall. 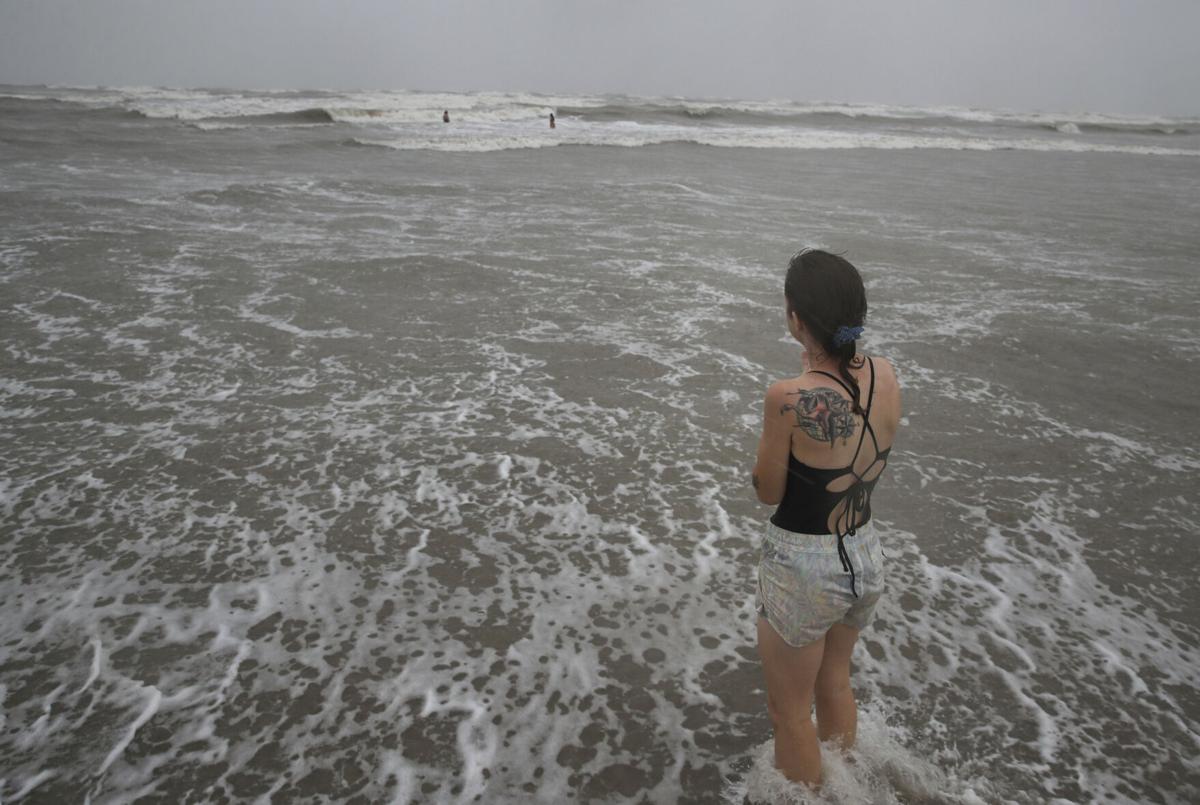 A woman watches her friends swim along the seawall in Galveston on Monday as Tropical Storm Nicholas approaches the Texas coast before strengthening to a hurricane later in the night.

Hurricane Nicholas is bringing wind and rain to the Texas Gulf Coast, but most of the impacts should remain south of the Bryan-College Station area, meteorologists projected Monday.

Most of the Brazos Valley was in the “marginal” forecast area for flooding, and forecasters with the National Weather Service projected the area would receive between 1 and 3 inches of rain as the storm moves northeast toward Louisiana.

The worst of the impacts — up to a foot of rain, storm surge and sustained tropical storm force winds — will be contained mostly to the area south of Interstate 10, Katherine Lenninger, a meteorologist in the Houston-Galveston National Weather Service office, said Monday afternoon.

Some outer rain bands of Nicholas could bring heavier downpours, causing some areas to flood, she said.

Shel Winkley, chief meteorologist for KBTX-TV, said he expects the biggest impact for the Brazos Valley will be wind, which could gust up to 40 mph as the storm moves into the area.

Most of the impacts locally should be minimal, he said.

“I think there’s going to be a lot of folks that are disappointed in how close this thing is but how little rain we’re going to actually end up getting from it,” Winkley said, noting the area’s need for rain.

Meteorologists in the National Weather Service’s Houston-Galveston office said Monday afternoon that they expected communities along the Texas Gulf Coast to see 6 to 12 inches of rain, with the potential for flash flooding and urban flooding.

The storm’s track has shifted in both east and west directions, making it more difficult to predict and giving it a wider wind field, the National Weather Service said.

Winkley said winds in the upper levels of the atmosphere and dry air interacting with the storm kept Nicholas from developing into a stronger storm as it moved slowly over warm Gulf Coast waters.

Along the state’s Gulf Coast, school districts canceled school Tuesday due to the storm, which prompted tropical storm warnings for almost the entire Texas coastline. Sam Houston State University in Huntsville also announced Monday its main campus would be closed on Tuesday due to Nicholas.

The storm was approaching hurricane strength late Monday, and the National Hurricane Center projected landfall near Palacios Monday night, following a track inland to the northeast.

The Houston-Galveston National Weather Service meteorologists said Nicholas’ effects could last into Tuesday as the storm slowly moves through the area.

The Associated Press contributed to this report.

A former Brenham High School coach was sentenced this month to 10 years in prison for having a relationship with a student.

Renovations worth $5.9 million are set to begin soon at Easterwood Airport.

The number of active COVID-19 cases in Brazos County surpassed 2,000 for the first time on Tuesday as health officials reported 230 new cases …

The number of active COVID-19 cases in Brazos County dropped slightly on Thursday after four days of record highs.

Editor’s note: This is part of a series of stories highlighting high school students from the Brazos Valley who are active in 4-H or FFA. The …

A Bryan man was sentenced to life in prison this week after being found guilty of assault family violence with a previous conviction.

People shield their faces from wind and sand on Monday on the North Packery Channel Jetty in Corpus Christi. Lifeguards patrolled the beach to warn people of the conditions ahead of a storm in the Gulf making landfall.

A woman watches her friends swim along the seawall in Galveston on Monday as Tropical Storm Nicholas approaches the Texas coast before strengthening to a hurricane later in the night.