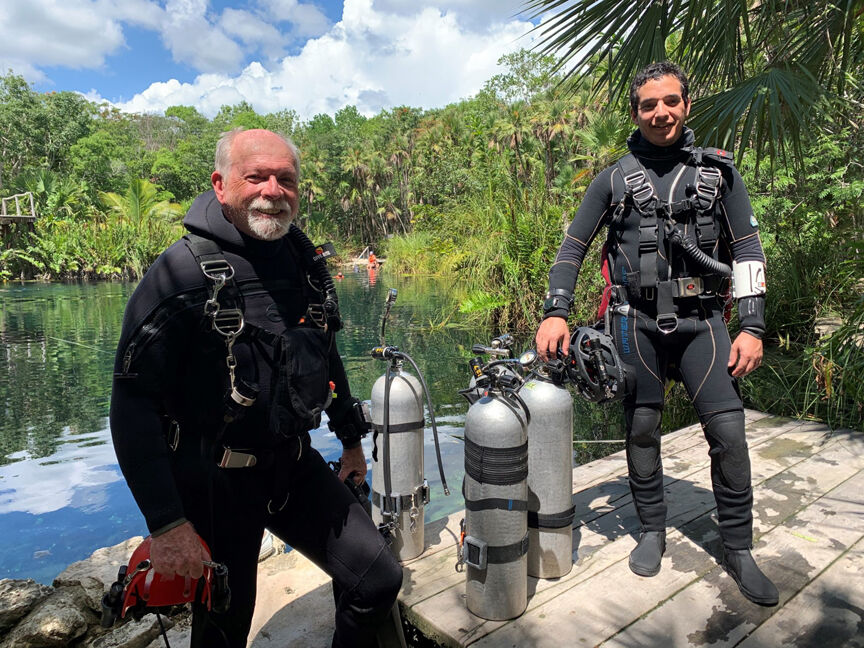 A new Netflix series features a segment on Texas A&M-Galveston professor Thomas Iliffe and graduate student Fernando Calderon on a cave dive in the Yucatan Peninsula. 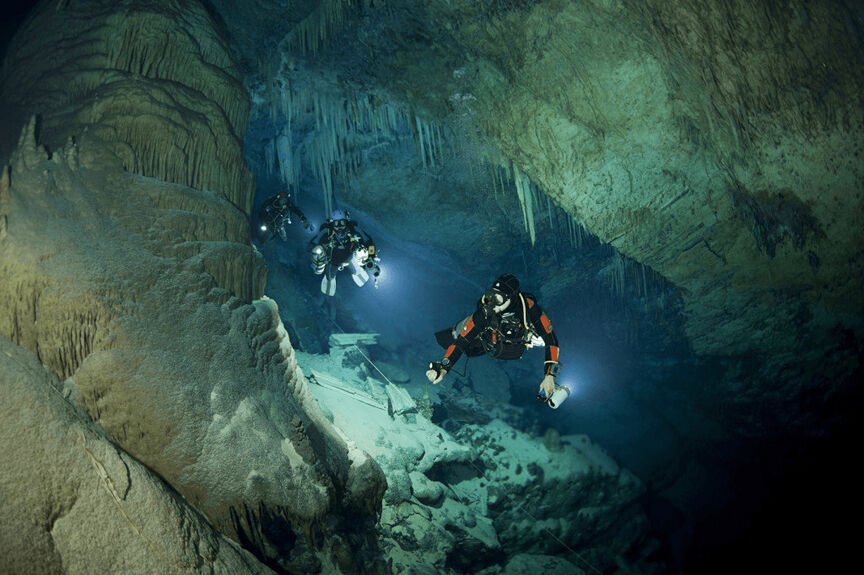 Tom Iliffe, right, diving in a Bermuda cave where he found blind crustaceans. During his 40-year career, he has discovered more than 350 species of marine life and has explored more than 1,500 underwater caves, more than anyone else in the world.

Texas A&M Galveston professor Thomas Iliffe said he is always happy to share his expertise with broader audiences, and he recently had a chance to do just that with his appearance on the new Netflix series Alien Worlds.

The British nature show explores modern understandings of biology and civilization on Earth to conceptualize what extraterrestrial life could be like on other planets.

Iliffe, a professor of marine biology, and graduate student Fernando Calderon are in the first episode as they explore an underwater cave on Mexico’s Yucatan Peninsula. The cave is thought to have been formed by a meteor about 66 million years ago, changing the planet’s climate and killing off 75% of life, leading to the extinction of dinosaurs.

“I am a teacher of not only students at A&M,” he said of his time on the show, “in this opportunity I’m a teacher of people all around the planet. … It’s not something that everybody gets the chance to do. I try to impress upon people the value of this underground environment, that it’s something that is very special. Just because you can’t see it doesn’t mean it doesn’t need protection and preservation. ”

Filming for the show was completed last fall, before the COVID-19 pandemic. Iliffe said he was at the site for research but took two days of his trip to work with the film crew for the show. The dives caught on camera are at a privately owned cave known as a cenote, which is an entrance pool or sinkhole leading to vast subterranean underwater cave systems.

As he explains in the show, there are about 10,000 cenotes across the peninsula, and in the northwest corner they form a massive semicircle, marking the edge of the impact crater from millions of years ago. The area is known as the Ring of Cenotes.

Iliffe explains in the episode how the meteor strike and the mass extinction shaped life on Earth.

When diving in the caves, Iliffe said, he thinks of it as diving down the barrel of the smoking gun that killed the dinosaurs.

“The biology of the caves is fantastic,” Iliffe said. “The tie-in from the caves to the important mass extinctions that have taken place and shaped life on the planet are interesting. And it’s probably not very different to events that take place elsewhere around the galaxy and around the universe.”

During his 40-year career, Iliffe has explored more than 1,500 underwater caves, which is more than anyone else in the world, according to an A&M press release. Iliffe’s work has led him to discover more than 350 species of marine life.

He once led a team of nine divers who descended 462 feet into Phantom Springs Cave in West Texas, the press release continues, making it the deepest underwater cave dive in the U.S.

The Netlix series is not the first time Iliffe’s work has been highlighted on screen — he has been featured on The National Geographic Channel, The Discovery Channel and more.

Alien Worlds is streaming now on Netflix. More information on Iliffe’s work is available at tamug.edu/cavebiology.

US Navy sailor puts training to work in boat rescue

US Navy sailor puts training to work in boat rescue

A Dallas man was in the Brazos County Jail on Sunday on drug charges after a traffic stop in Bryan over the weekend.

Police: College Station man jailed after kilo of cocaine found in his car

He is also accused of knocking a taser out of a police officer’s hand and attempting to grab a taser from another officer, authorities said.

A Navasota man was in the Brazos County Jail on Sunday after being charged with driving while intoxicated for the third time.

A Centerville man was arrested Sunday after being accused of assaulting a man with a broken beer bottle at Northgate in College Station.

As of Wednesday afternoon, 3,947 participants on 298 teams had already raised a combined $5.1 million dollars for the cause.

The College Station City Council is taking a stance against Senate Bill 10, Senate Bill 234 and House Bill 749 in the Texas Legislature out of concern about how the pieces of legislation could limit the city’s ability to lobby for its interests.

A new Netflix series features a segment on Texas A&M-Galveston professor Thomas Iliffe and graduate student Fernando Calderon on a cave dive in the Yucatan Peninsula.

Tom Iliffe, right, diving in a Bermuda cave where he found blind crustaceans. During his 40-year career, he has discovered more than 350 species of marine life and has explored more than 1,500 underwater caves, more than anyone else in the world.