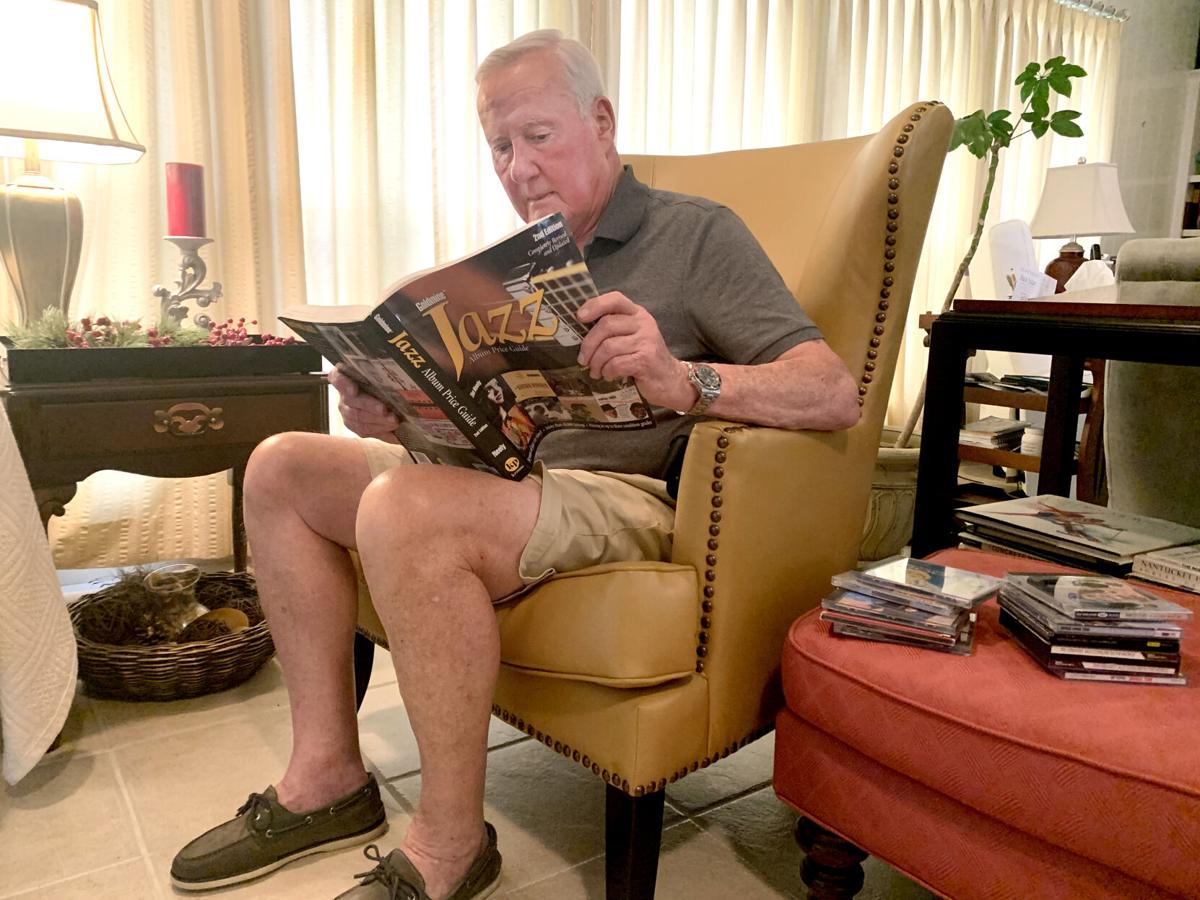 College Station resident Rusty Rush will broadcast his final jazz radio program on Friday after 40 years on the air. The program aired from 2 to 4 p.m. Fridays on KAMU-FM.

Rusty Rush holds a microphone in a photo from 1958 when he worked as sports editor for the Cannoneer newspaper for the U.S. Army in Fort Sill, Oklahoma.

After 40 years on the air, local jazz DJ Lewis “Rusty” Rush, is retiring and signing off on his last show Friday afternoon on KAMU Radio.

Area residents can tune in between 2-4 p.m. as Rush plays some of his favorite jazz hits by singers such as Frank Sinatra, Ahmad Jamal and John Pizzarelli. He will end his show with the hit song, “That’s All” by Mel Tormé.

The 84-year-old Rush fell in love with jazz at the age of 14 when he started listening to the Glenn Miller Orchestra.

He and his wife, Judi, who also has a strong love of jazz, have been collecting jazz records all of their life. They both grew up in Oregon, Illinois, and remember listening to many jazz artists play around town and on the radio. They were married in 1960, and by the next year they had moved to Texas to work in the clothing business.

“They hired me as a guest a few times and I would bring a few records over and we would play them. Finally they said ‘would you like to do your own show?’ And I said ‘yeah I think so,’” he said. “So I started a program called ‘Something Cool’ which is named after the song by June Christy. That was my theme song on the show.”

In between songs he would impart any knowledge he had on the artist being played, and continued his own research at home as he prepared for his next show. Little did he know he would be a volunteer jazz DJ for 40 years.

“Something Cool” was on the air every Tuesday from 2-4 p.m. until 1989 when Rush left the show to head back home to Illinois for a short time.

“I eventually made my way back to Texas, and by 1990 I was asked to return to the show. I renamed the show ‘Voices of Jazz,’” he said.

His new show aired Friday afternoons and he would come earlier in the week to record the show. He brought his own music from home, but often played albums that were available at the station.

When Rush wasn’t in the recording booth, he continued to work in clothing department stores, and as a general manager for the Texas World Speedway in College Station.

At the race track he met record promoter Kate Smith, who began supplying Rush with albums to put on the air.

“I ended up accepting a lot of albums from different promoters as a result and I kind of drifted away from ‘my music.’ I played a lot of stuff I would not have bought,” he said.

Later on he returned to playing the kind of music he enjoyed, and hoped listeners would keep tuning in.

Rush served in the U.S. Army for two years, based at Fort Sill, Oklahoma. During his time there he wrote for the Cannoneer newspaper as a sports editor.

“When I was in the service at Fort Sill, Louis Armstrong came to town to do a concert,” he said. “I kicked myself for not going backstage to meet the man. He died not too long after that.”

He wanted to interview Tormé, but ultimately kept getting turned away. However, he was able to interview well-known artist Chris Conner of the Stan Kenton Orchestra.

He said his favorite interview was photographer Burt Goldblatt, who took photos for jazz album covers.

“(Goldblattt) had wonderful anecdotes and a great sense of humor and we spilled over 40 minutes. We were still going strong and by the time I saw the time, I had to end the show. I also had some of the album covers he had shot,” Rush said.

His connection with the radio station gave him opportunities to be an emcee at local jazz festivals in College Station and Wolf Pen Park, and jazz concerts for the Lion’s Club.

His wife said she was proud of him for the work he did at the festivals and on the radio.

“When I saw the posters for some of the festivals he was going to emcee for, I told him his name should have been on the poster. He responded with, ‘It’s not about me,’” Judi recalled.

Rush said the emphasis was “always on the music.”

“I am passionate about the music and that is what it comes down to,” he said. “It is considered one of the three unique American art forms: jazz, cartoons and Steuben Glass.”

His love for Ella Fitzgerald, Willie Nelson, Sinatra, Sheila Walker and many more artists led him to collecting over 4,000 CDs and 2,000 LPs (long-playing vinyl records), which he donated to the University of North Texas.

He and Judi have been collecting jazz related art for over 40 years, and jazz music for over 70 years. Rush hopes more young people listen to and perform jazz music, in order to strengthen the genre as time goes on.

“I don’t see as many African Americans involved in the jazz music industry as I used to. I wish there were more artists in the industry. There also aren’t venues that you can go listen to the music as much anymore, or even on the radio,” Rush said.

Judi said they grew up 100 miles from Chicago and those radio stations used to be full of jazz music when they were young.

Despite leaving his love of working jazz radio, he advised young DJs today to learn as much about their project as they possibly can, and have a passion for whatever they are pursuing.

Rick Howard, who was a program director at KAMU for many years, worked with Rush in the recording booth and loved the time he spent with him.

“Rusty volunteered his time every week for many years. He donated his music and loved doing it. He loved what he did and we loved having him there. I am sure there were times he may not have felt very well, but either sick or healthy he was there,” Howard said. “He was able to give up his time and effort and you can’t put a price on that. Most people expect to get paid or something in return, but I think his return was the love for what he did for so many years.”

In his retirement, Rush hopes to travel with Judi and their two daughters, Stacy and Jennifer.

“It’s been 40 years and it’s been a great ride,” he said. “I always said I was going to do the show until I got it right, well I haven’t gotten it right yet. I am 84 years old and it’s just time…that’s all.”

The following will be closed in the Bryan-College Station area in recognition of the Thanksgiving holiday:

The challenge of finding what soothes the pain

In the journal JAMA Network Open, research on the long-term effects of contracting COVID-19 shows that at least 50% of COVID-19 survivors expe…

College Station resident Rusty Rush will broadcast his final jazz radio program on Friday after 40 years on the air. The program aired from 2 to 4 p.m. Fridays on KAMU-FM.

Rusty Rush holds a microphone in a photo from 1958 when he worked as sports editor for the Cannoneer newspaper for the U.S. Army in Fort Sill, Oklahoma.