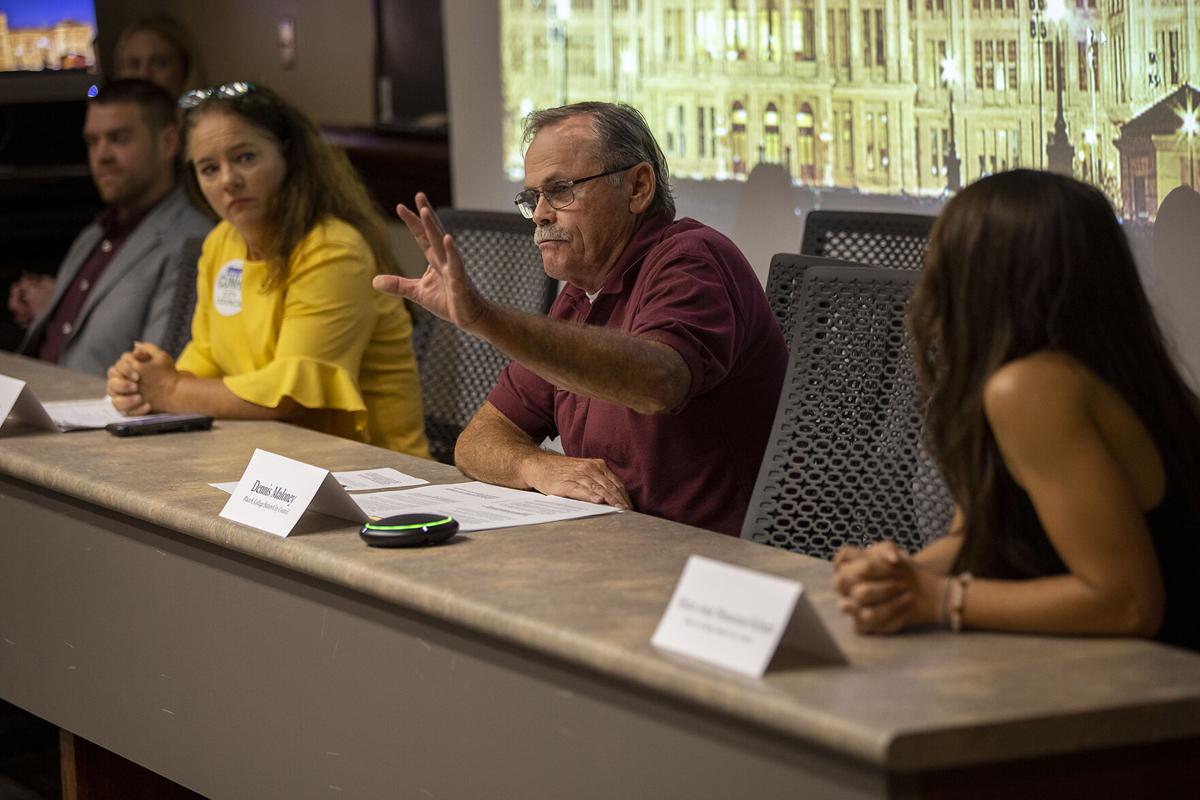 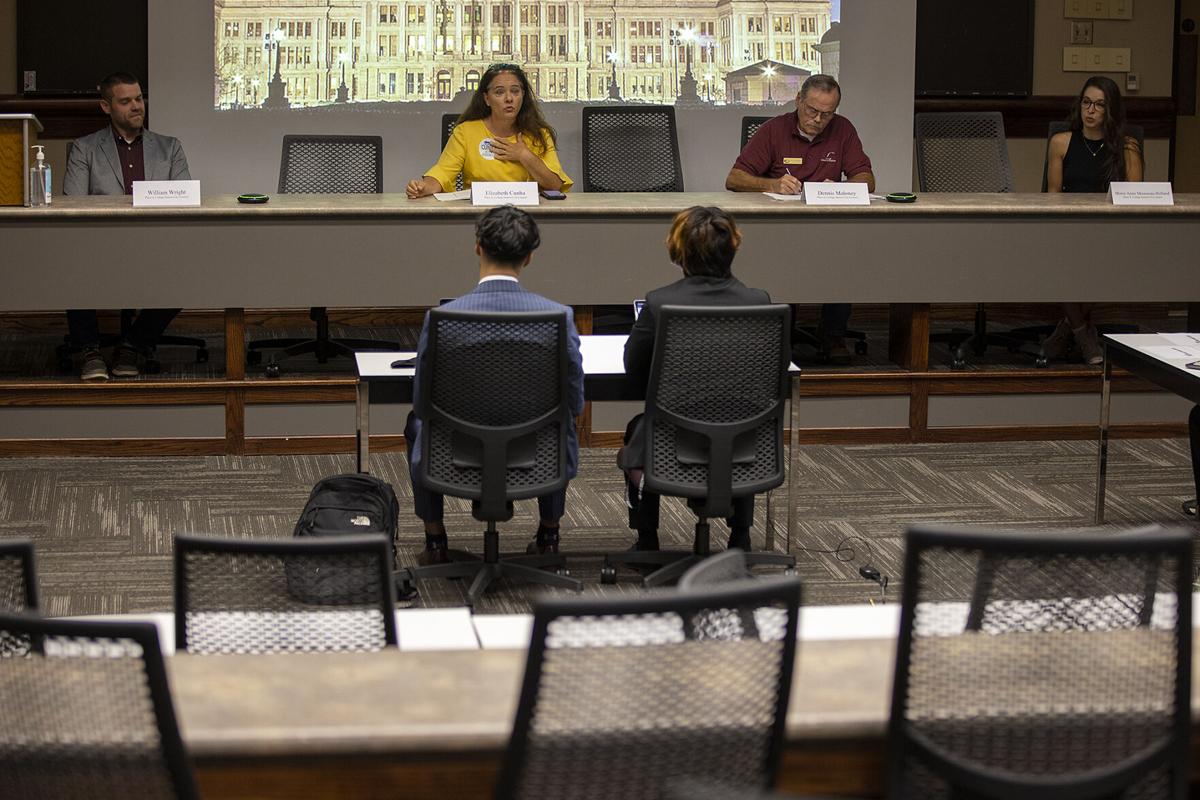 During the event held on campus and livestreamed, Place 4 candidates William Wright and Elizabeth Cunha and Place 6 candidates Dennis Maloney and Marie-Anne Mousseau-Holland addressed topics ranging from the city’s charter amendment proposition to working with the City of Bryan to transportation needs.

Place 6 candidate David Levine did not participate in the forum due to a scheduling conflict, according to Alexia Hernandez, chair of the Student Government Association’s community relations committee.

All four participating candidates said it is beneficial for the City of College Station to work collaboratively with the City of Bryan.

One of the topics that divided the candidates was Proposition C – an amendment to College Station’s city charter that would keep future city elections on odd-numbered years rather than changing to even-numbered years that would align with state and federal election cycles.

Cunha and Mousseau-Holland placed their support behind voting against the amendment, allowing the city’s future elections to take place during even-numbered years.

Maloney encouraged voters to vote in favor of the request to keep the elections as they are during odd-numbered years, and Wright supported the option too.

Wright said it is important the decision is up to voters, rather than being decided by City Council members, but he “leans toward” leaving it as it is. He said he wants to see a push toward voter engagement, rather than changing the election cycle.

Mousseau-Holland, who became a United States citizen in 2012 after immigrating from Canada, said she has followed local politics for six-plus years, but has only voted in local races during presidential elections when she was already at the polls.

She said having the elections with the state and federal elections gives people an incentive to learn about local issues on the ballot.

Cunha, emphasizing her opinions are for herself and not on behalf of the council, said the difference between odd-year and even-year elections is evident in voter turnout historically. She cited the number of voters in 2019 compared to 2020 when she was elected to fill Elianor Vessali’s unexpired term. In 2019, she said, 6,000 people voted in the City Council race, compared to 32,000 who voted in her election in 2020.

“It’s a huge difference in turnout,” she said, noting state and national elections create greater visibility for local races. “I challenge you to go ask 10 random people on campus if they know there is an election starting in a week and just see.”

Maloney said he “completely disagreed” with Cunha, saying a voter’s ability to learn about local issues and cast a ballot in an election does not change between an odd-numbered or even-numbered year.

“You want more engagement, more people to know more about local issues, you need to do it when you’re not bombarded by national and state politics,” he said.

The candidates agreed on the need for transportation improvements in the city.

There is not just one tactic to solve the transportation needs in the community, Wright said, saying he would like to see more awareness of the current public transportation options with the Texas A&M and Brazos Valley Transit bus systems. He also supports additional bus stops to encourage ridership.

Cunha, who is running for re-election for Place 4 after serving 11 months in Elianor Vessali’s unexpired term, said traffic congestion is the biggest concern she hears from citizens.

“You do not build your way out of traffic congestion,” she said, saying the best way to alleviate traffic congestion is to add more mobility options, including considering motorized scooters and improving bus options and routes and bike lanes.

“We need better bike lanes; we need more buses,” she said. “But we also need you to use what we have so that there’s a demand and a grassroots push to make it better.”

Maloney, who is running for re-election for Place 6, said the city can expect an interstate in the “near future,” and there is talk of creating a loop that would allow pass-through traffic to remain off the city’s main roads.

He said he wants to see the Brazos Valley Transit System and the Texas A&M University bus system combine to create an “urban public transportation system.”

He is also a proponent for multipurpose paths that accommodate pedestrians and slow-modes of transportation, such as bicycles, skateboards and scooters.

Mousseau-Holland, the owner of a First Adventures Daycare and Preschool, said she wants to see an expansion of the resources available to students and the community.

“I would much rather work with them, with their resources; they’re already going through town, to grow that into what Mr. Maloney was talking about kind of an urban bus system.”

The broader community may have to pay to use the system, but that would in turn help fund the system’s further expansion.

When it comes to housing, Mousseau-Holland said, she would want to work with university students and other citizens to help all citizens feel safe and respected in their homes and also have conversations about the real issues College Station residents face about housing.

Maloney said students should talk to each other and “boycott” companies who do not treat tenants properly.

“It’s all about money,” he said. “It’s always about money, and when you deprive them of that money, they’re going to start respecting you, so use your economic power to do that.”

Cunha said she believes students should have housing choices, saying the council is trying to provide a wider variety of affordable options, encouraging students and residents who have an issue to reach out to councilmembers or sign up to speak during the City Council meetings.

An “out of the box” idea she suggested during the forum is a home sharing option she has seen in London where an older resident and younger resident are paired together by a matching company and each pay a minimal amount.

Wright, who currently lives in a rented duplex with his family, said he remembers the issues of finding safe, reliable, affordable housing, noting many of the new complexes come with a higher price tag.

When it comes to tenants’ rights, he said, students should have as much respect as any other tenant.

“The student is just as much a citizen of College Station as I am,” he said. “… They should be subject to the same rights as anyone else.”

Following the forum, Wright said it was good to get questions from the student perspective, and was impressed by how engaged the students seem to be and the high-level thoughts behind the questions.

Cunha said coming to the students enables access and engagement, saying the questions showed a depth of understanding that they are trying to participate in city government.

Clarence Manglal-lan, vice president of the Texas A&M Student Government’s municipal affairs committee, said the forum was important to help bridge the gap between the city and the student body, a divide that he said generally exists between universities and cities throughout the country.

No matter the viewership on the livestream, he said, he is happy to get the conversation started.

Watch Now: What will it take to keep schools open?

As Omicron Spreads, Americans Are Going To Work Sick

As Omicron Spreads, Americans Are Going To Work Sick