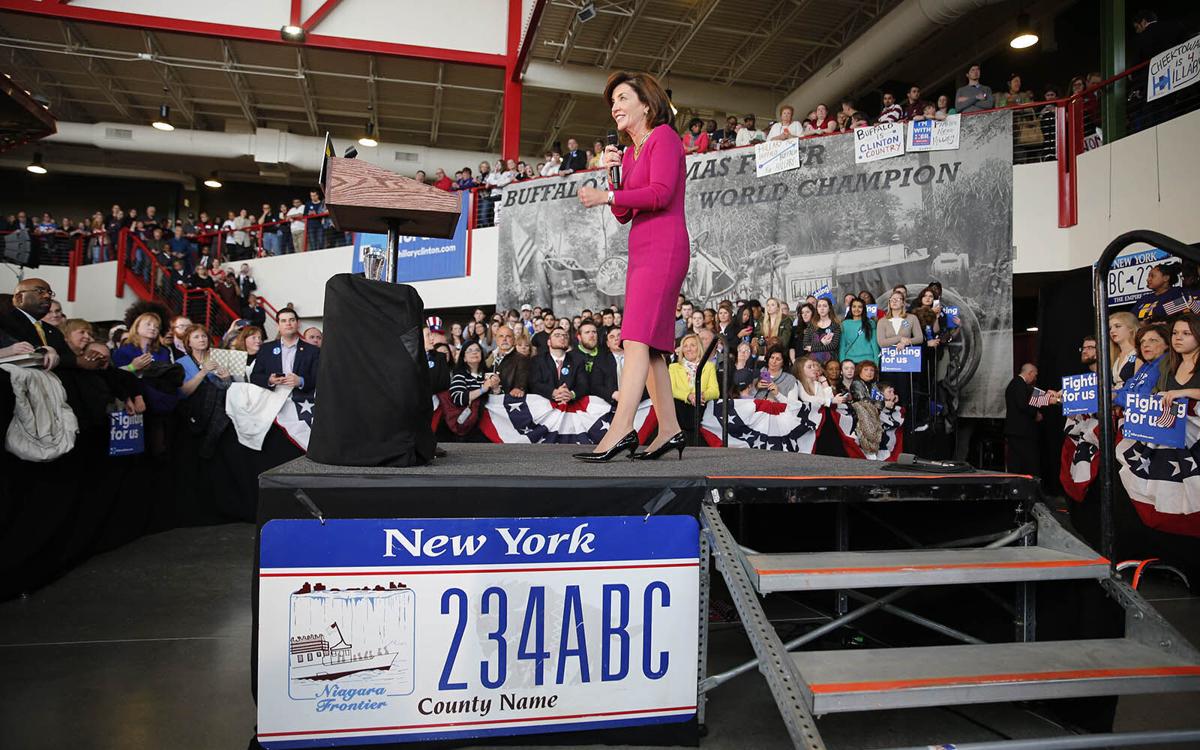 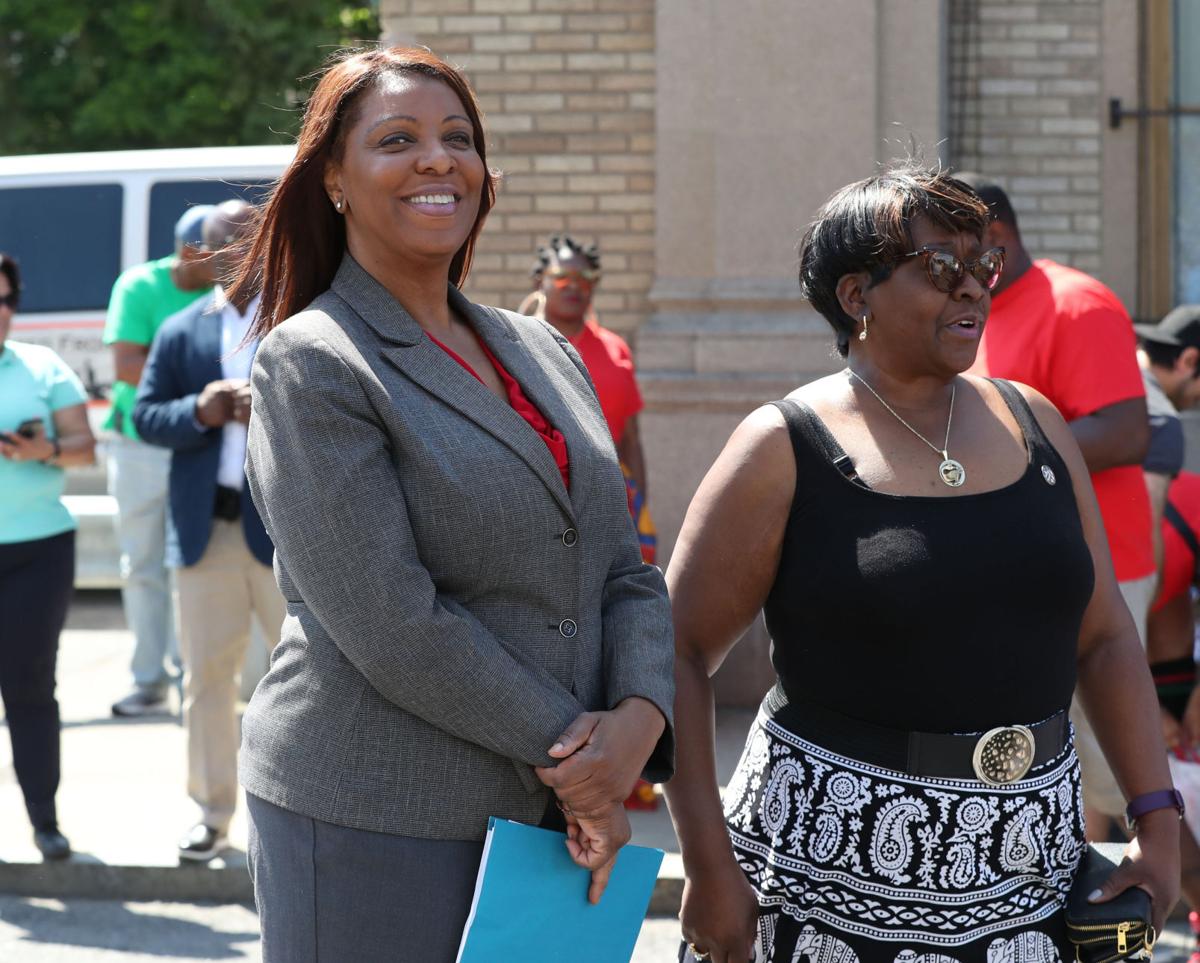 In 1984, Democratic presidential candidate Walter F. Mondale announced his choice of U.S. Rep. Geraldine A. Ferraro of New York to be his running-mate; Ferraro was the first woman to run for vice president on a major-party ticket.

With Gov. Andrew Cuomo's announcement Tuesday, Lt. Gov. Kathy Hochul, a Buffalo Democrat, will become the state's first female governor in 14 days. The announcement puts her in rarefied political air. Of the nation's five largest states by population, just one, Texas, has had a female chief executive – and that was 30 years ago.

Here's a look at some of her company among "female firsts" in New York State government.

Hillary Clinton's name is followed by any number of "firsts" in U.S. history books. For New Yorkers, in 2000, she became the state's first female senator.

She was easily reelected to a second term in 2006, and served until 2008, when she resigned to run the first of two unsuccessful presidential campaigns.

In 2019, James became the first woman elected as New York's top law enforcement official, though her immediate predecessor, Barbara Underwood, served in an acting capacity for several months following the resignation of Eric Schneiderman. James herself is frequently mentioned as harboring ambitions for the state's top office in the future.

In another first that reached the national stage, Geraldine Ferraro, a Democratic congresswoman from Queens, served in 1984 as the first woman to be nominated by a major party on a presidential ticket, when she was picked by Walter Mondale as his vice presidential running mate.

That move was called "bold and historic," in a statement by Vice President Kamala Harris upon the death of Walter Mondale.

In New York, a judicial milestone occurred when Judith S. Kaye served as the chief justice of the New York Court of Appeals, making her the state's top jurist. She was nominated for the role in 1993 by then-Gov. Mario Cuomo, and served in the role until she reached the state's mandatory retirement age for judges in 2008. During her time on the bench, Kaye championed "problem-solver" courts, to address cases with specific root causes, including domestic violence.

While Hochul will become the state's first female governor, she does not hold that distinction in her present role as lieutenant governor. That distinction goes to Krupsak, a Democratic state senator from Schenectady who, in 1975,  challenged then-novice politician Mario Cuomo for the role, and won. In the process, Krupsak became the first woman  to win election to a statewide office in New York, and served one term as lieutenant governor under Democrat Hugh Carey. Krupsak eventually waged an unsuccessful challenge against her boss for the Democratic nomination after serving one term as his lieutenant.

Cuomo resigns: What we know, what we don't and what's next

After months of holding on to power, New York Gov. Andrew Cuomo abruptly resigned Tuesday. We take you through what happened and what's next.

Ladies first As women struggle to make strides in Western New York, here's a sampling of those who brought us forward by being foremost in their field

This is the best of times, for women in Western New York, and it’s the worst of times. Look around and you’ll see why: stunning achievement is mixed with stagnation. Women in politics on the national and state levels — like Sarah Palin and Hillary Rodham Clinton — are blazing trails. But back home in Buffalo, no woman has

The next governor: Kathy Hochul is a politician who leads with charm, not fear

People who have worked with Hochul over the years tend to say the same things about her – that she's hard-working, competent and unusually kind for someone in a profession never really known for kindness.

From The News' archives: Who is Kathy Hochul?

Buffalo native Kathy Hochul will become the next governor of New York State.

A 'survivor:' Kathy Hochul has a history of surprising political victories

More often than not, the stars, moons and planets of New York's political heavens have aligned perfectly for Kathy Hochul.

In 1984, Democratic presidential candidate Walter F. Mondale announced his choice of U.S. Rep. Geraldine A. Ferraro of New York to be his running-mate; Ferraro was the first woman to run for vice president on a major-party ticket.