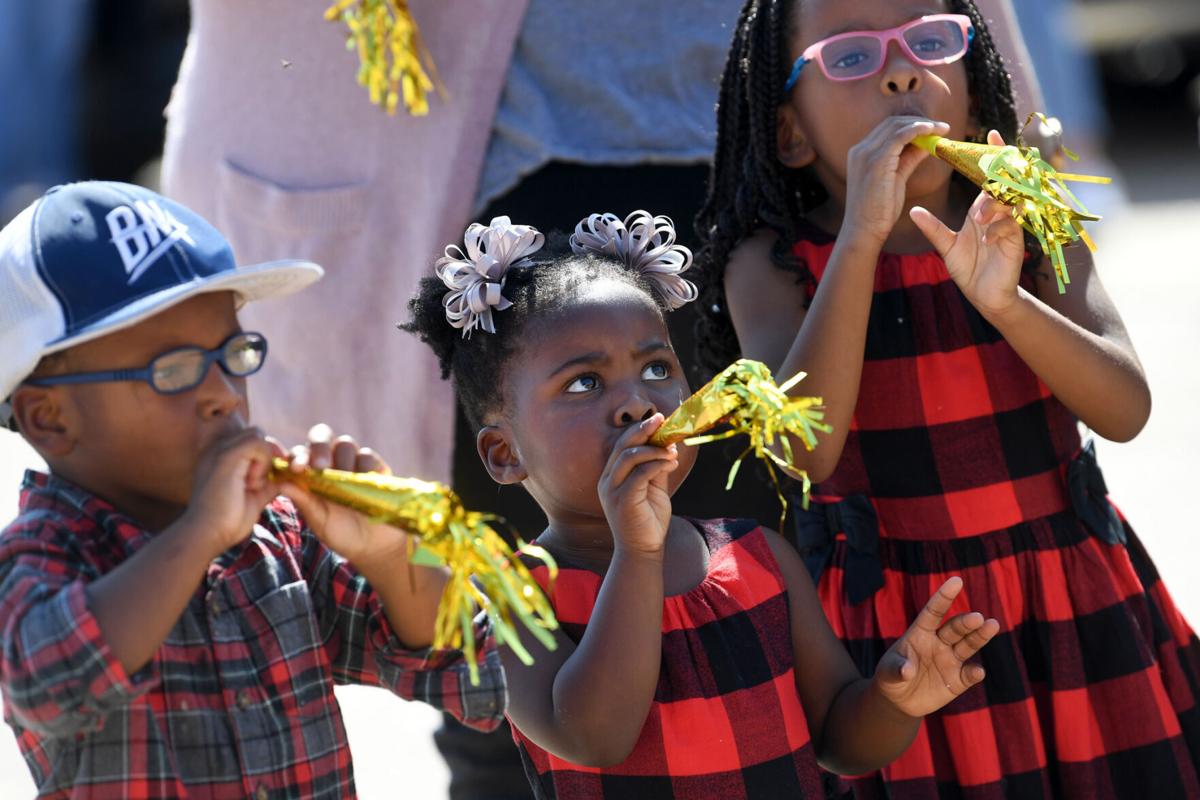 Evelyn Jane, 2, center, plays with a noisemaker while celebrating her adoption with her foster siblings and guests of an Adoption Day party at the Bryan Department of Family and Protective Services offices on Thursday, Nov. 12, 2020. 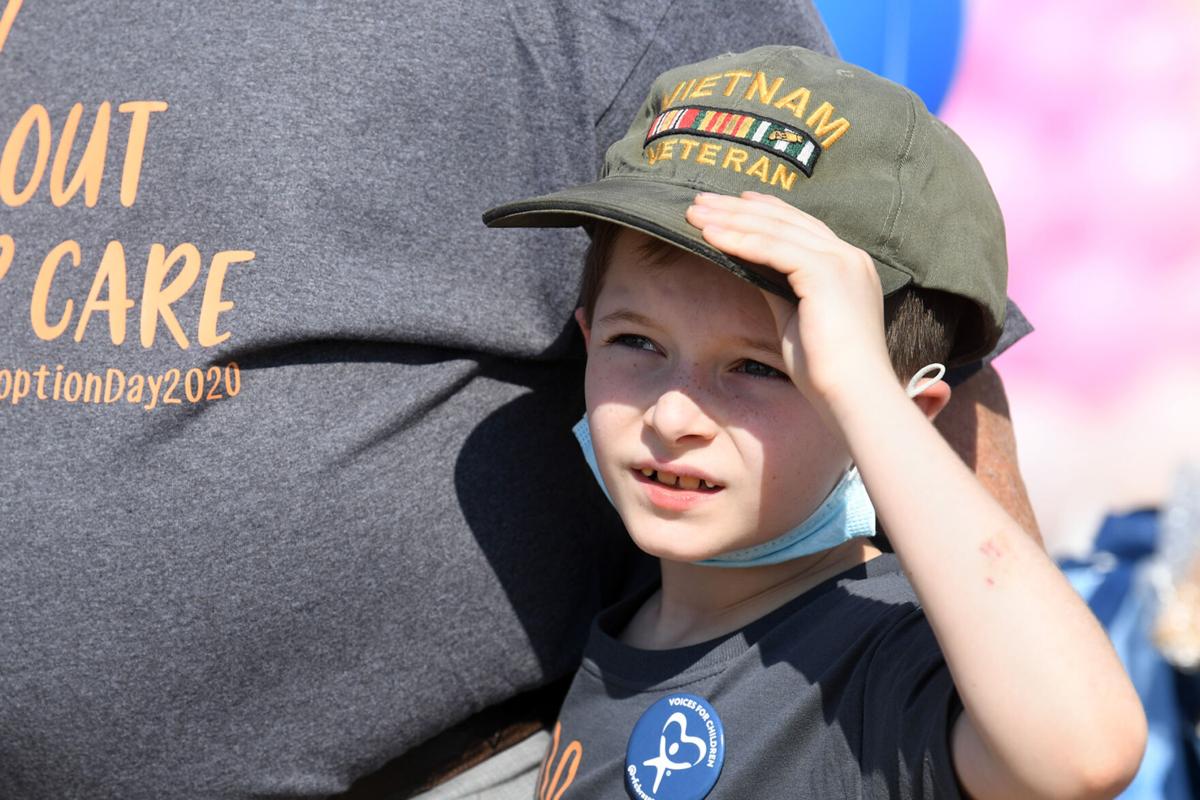 Andries Nance, 8, puts on his grandfather's hat while attending an Adoption Day celebration at the Bryan Department of Family and Protective Services offices on Thursday, Nov. 12, 2020. 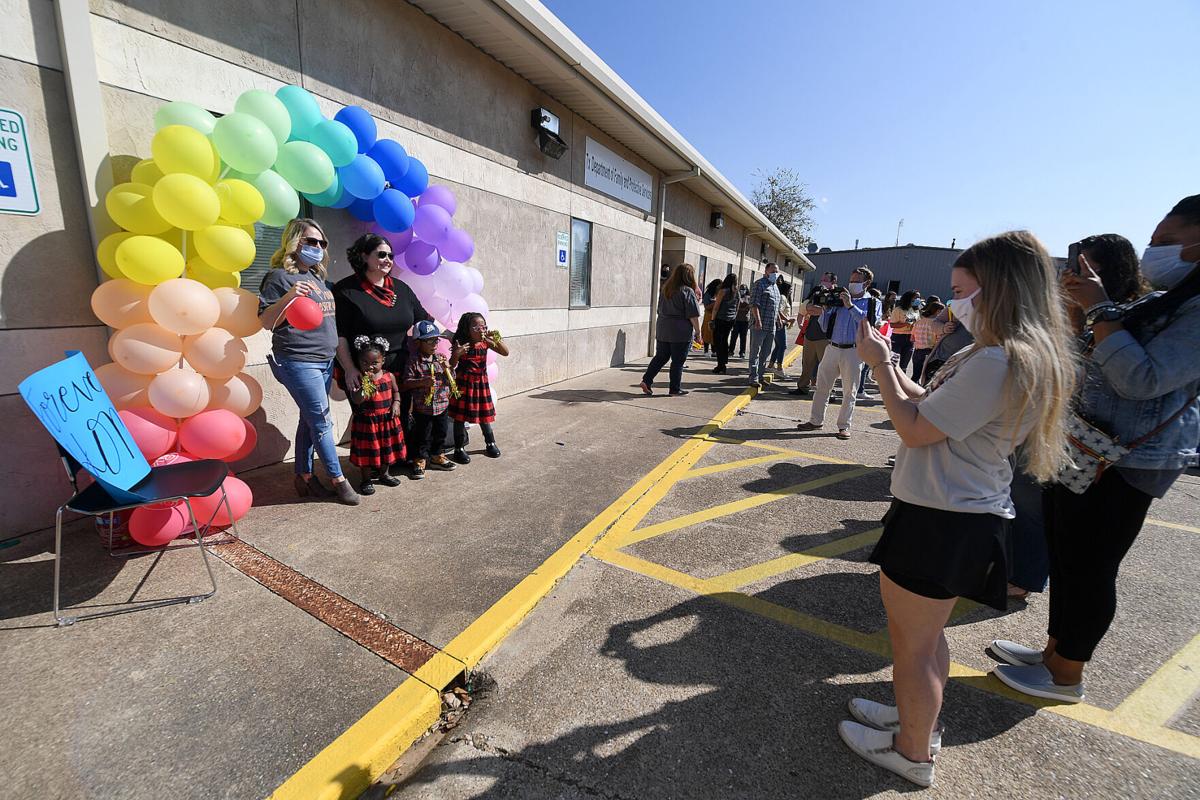 Different than usual due to COVID-19, the 13th annual event was outside the Bryan Department of Family and Protective Services office following the adoption proceedings, which were broadcast on Zoom.

Two of the four families attended the celebration that included noisemakers, balloons, posters, pizza, cupcakes and a basket of toys and goodies for each child, who were aged 1 to 8.

“Today is a celebration,” Tiffany Stewart, adoptions supervisor for Brazos County, said. “These are four kiddos that get to exit out of the foster care system and get to spend the rest of their lives with family. They have united and they have love and nurturing, and they will have that forever.”

While four adoptions were taking place on Adoption Day, the day is really about celebrating all the children who found permanent homes over the past year, Voices for Children Executive Director Kimberly Martinez said.

When they cannot reunite children with their families, she said, the second happiest thing they get to do is find new forever families for the children.

“It’s [wonderful] to be able to look and find and explore forever families who want to bring children into their homes and into their hearts,” Martinez said.

“But what we do know is it’s been filled with chaos and sadness and abandonment and loss and traumatic things they see that we would never want children to lay their eyes on — most adults can’t stand to see,” she said. “So their journey is unimaginable, but somehow, some way, the right time, the right place, the right spirits, the right souls, the right people, everybody converges in one perfect storm and you get to create a new family. I don’t know that there’s anything better than that.”

Each of the adoptive families has a heart for children, she said, saying adopting is “no small task.”

Jerry Nance and his wife, Babette, adopted their 8-year-old grandson Andries. Jerry Nance said Thursday’s event was the culmination of a two-and-a-half-year journey. Legal battles over parental rights led them to foster care before getting back onto the adoption path.

“We knew this day would come; it’s just getting there,” he said, saying the day just made it a little more formal. Nance said he and his grandson have fun with each other, and Andries said he is happy to be with them.

Nance said he would have been happy if Judge Andrea James just blessed the adoption and that was all, but he is glad they still made it a special day to celebrate the families and also bring awareness to adoption.

“There probably are a lot of little children that do need to get into a decent family and have an opportunity,” he said.

Stewart said it was important to still make the day special to celebrate the families and thank them for opening their hearts to their children.

For some children, Martinez said, they have not had much to celebrate up until their adoption.

“We work with children who’ve never had birthdays. We work with children who don’t have Thanksgiving, who don’t have Christmas. The celebrations that they get to enjoy are so few,” she said, “and to allow them the opportunity to enjoy, laugh in a safe space where they feel safe and they laugh and smile and talk to strangers knowing that the strangers aren’t going to hurt them is what Adoption Day brings.”

For more information on adoption and becoming a foster parent, people can go to www.adoptchildren.org or call 1-800-233-3405.

Since 2001, the nonprofit organization has worked to improve the lives of children in the foster care system through volunteer advocacy in courts, schools and in local communities.

Evelyn Jane, 2, center, plays with a noisemaker while celebrating her adoption with her foster siblings and guests of an Adoption Day party at the Bryan Department of Family and Protective Services offices on Thursday, Nov. 12, 2020.

Andries Nance, 8, puts on his grandfather's hat while attending an Adoption Day celebration at the Bryan Department of Family and Protective Services offices on Thursday, Nov. 12, 2020.