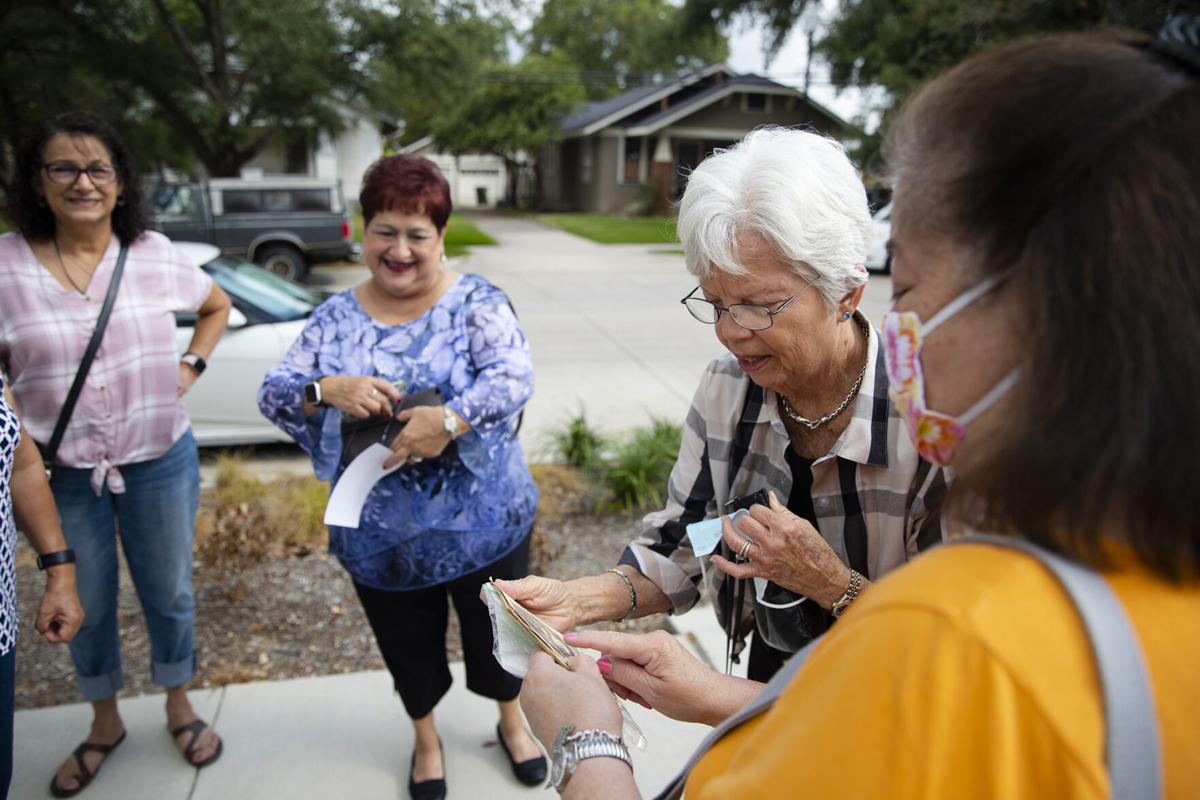 Mary Ortega Bernal, right, shows class photos from the 1960s to her former teacher, Cindy Still, outside of the old Bowie School in Bryan before taking a tour of the renovated building which now serves as office space, on Friday. 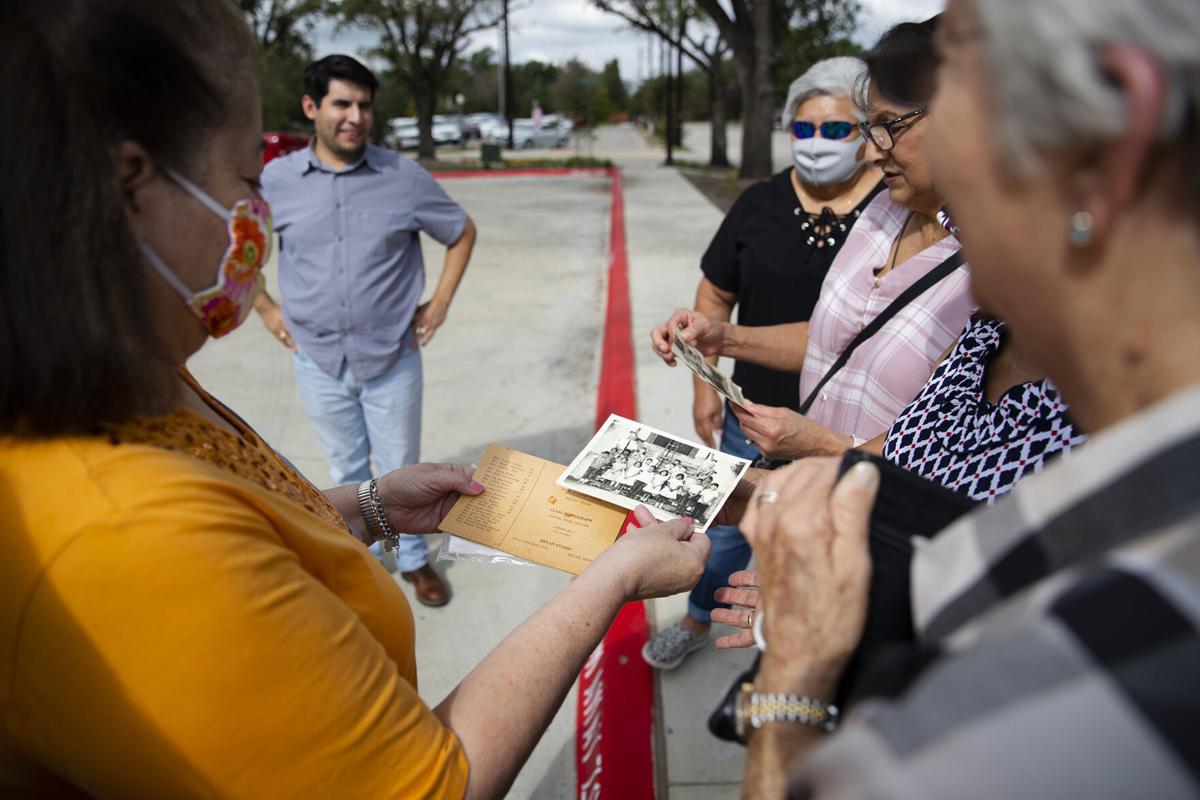 Mary Ortega Bernal, right, shows class photos from the 1960s to her former teacher and classmates outside of the old Bowie School in Bryan before taking a tour of the renovated building which now serves as office space, on Friday. 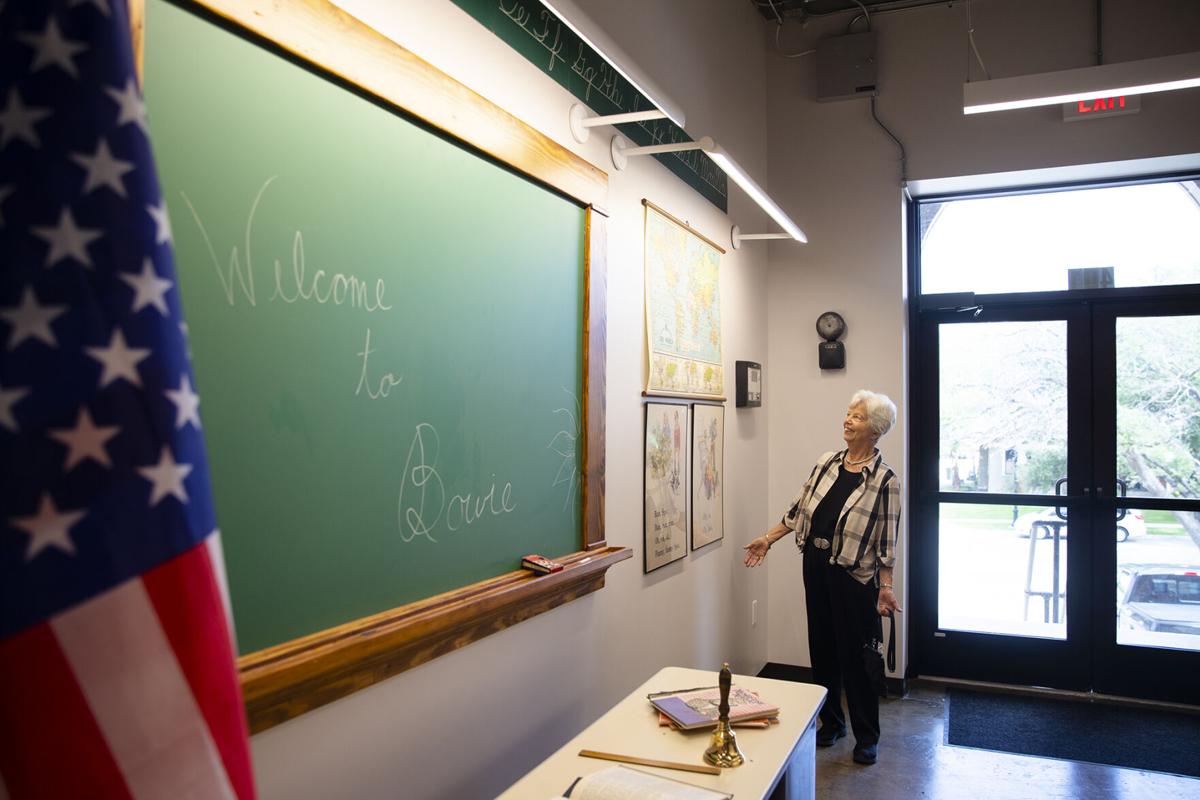 Cindy Still, a retired teacher who taught at Bowie School in Bryan from 1965 to 1987, looks at a display of items saved from the old school building during a tour of the renovated school building turned office space on Friday.

For many former Bryan students, 401 W. 26th Street will always be Bowie Elementary School, and renovations from new tenants Gessner Engineering have incorporated that history.

Above the front entry, “Bowie School” still greets visitors, and refurbished classroom furniture and supplies are placed throughout the building, including in the entryway where desks are placed along with a map of the world, artwork from elementary-age books and a green chalkboard that reads “Welcome to Bowie.”

On Friday, a dozen former students who attended Bowie Elementary from 1960-1966 and former Bowie teacher Cindy Still toured the renovated space after Mary Jane Valadez organized the gathering as a surprise for Still.

“It’s been wonderful, and seeing the students. I can remember where many of them sat in my classroom,” Still said. “You just remember. … It just brings it back.”

As she prepared to walk in, former Bowie student Mary Lou Carpio Adame said she was excited to see the renovations and compare it to how it looked when she and her friends attended the school.

“Just happiness, just all the memories flashing back from those days to now,” she said, describing her emotions. “So happy that this wasn’t torn down because it was going to be. When I heard about it, I was so sad thinking ‘I don’t want them to tear it down.’ There’s a lot of memories.”

Looking at the front stairs where the group took a group picture, Adame said, she remembers sliding down the banister and chipping her tooth in the process, and walking from Monterrey Street across Highway 21 to the school with other students.

Adame said she was ecstatic to hear in 2019 that Johanna and Thomas Gessner and GVBM LLC had purchased the building with plans to renovate the space instead of demolishing it.

Built in 1918, the building served as a school until 1991. Now it houses Gessner Engineering, Vaughn Construction and Bowie Barbers with more space available to be leased out in the future.

“A lot of the time we’re building new things, but we were able to take something that was older and incorporate the new and old back together,” Lance Muzyka, safety director with Gessner Engineering, said Friday.

That is unique for an engineering firm to do, Muzyka said, but his favorite thing is taking a building that was constructed more than 100 years ago and making it into a workable office space.

He pointed out to the group where desks and bells are being used as artwork to remember the building’s history and said a collection of auditorium seats will be on display. Gessner Engineering also plans on using refurbished lockers from the school for storage. In the bathrooms, tile in the same design as was used in the school spells out Bowie School 1918 on the floor.

“It’s been really wonderful,” Still said about the day. “It’s wonderful to see the building because they’ve done such a magnificent job. They have done a fabulous job. They’ve restored it, but they’ve maintained the personality of the building.”

Still, who taught an oral languages class at Bowie from 1965-1976, said touring the building with some of her former students was a reminder of the days they spent there.

“It was just a special, special place in our hearts,” she said. “Always will be.”

Muzyka said they plan to have pictures and report cards from former students on a few of the walls in the building to deepen the spirit of the school in the building.

While the interior of the building no longer resembles a school, some of the sounds are the same. Trains still run behind the school.

“Eight o’clock in the morning just before the tardy bell would ring, a train would come through,” former student Gil Sifuentez said.

He remembered students gathering at the store on the other side of the railroad tracks and trying to make it back to school without being caught by a train.

While a parking lot sits beside the tracks now, the group remembered the large trees and playgrounds that used to fill the back area.

Along with the good memories of the school, Sifuentez said there are a few sad ones of discrimination. He said they were not allowed to speak Spanish, even on the playground, and remembers watching a funeral procession of a classmate who died from leukemia take place at the funeral home across the street.

Their years at Bowie were impactful ones in world history also, he said, remembering having atomic bomb shelter drills at school and learning at 3 o’clock one afternoon about the assassination of President John F. Kennedy.

However, the most influential part of the school, he said, were the teachers.

“She and all these teachers instilled in us to get an education an education is something no one will ever take away from you,” Sifuentez said, saying it is a sentiment he passes on to current students. “… If I don’t have these teachers, I don’t graduate from high school.”

Still, who retired from the Bryan school district in 1987, said it is a way to let the world know “how wonderful Bowie was.”

“I loved teaching everywhere, but Bowie was just special,” she said.

One dead after single-vehicle crash Monday night in Bryan

Bryan police have identified the person who died in a single-vehicle crash late Monday as a 28-year-old Bryan woman.

The COVID-19 death toll in Brazos County grew by five on Monday, as health officials reported 48 new cases of the virus among county residents.

Driver arrested after pedestrians hit by vehicle on Texas Avenue

Two men were critically injured early Sunday after being hit by a vehicle while crossing Texas Avenue, authorities said.

Voters in the College Station school district will find four bond propositions on their ballot, all making up an $83.1 million bond proposal t…

Brazos County’s active COVID-19 caseload dropped below 2,000 for the first time in nearly a month on Tuesday, as health officials reported 26 …

The Brazos Valley Fair and Rodeo gallops back into Bryan the next two weekends as it celebrates its 10th year.

A Grimes County 3-year-old who has been missing since Wednesday was found alive Saturday.

Mary Ortega Bernal, right, shows class photos from the 1960s to her former teacher, Cindy Still, outside of the old Bowie School in Bryan before taking a tour of the renovated building which now serves as office space, on Friday.

Mary Ortega Bernal, right, shows class photos from the 1960s to her former teacher and classmates outside of the old Bowie School in Bryan before taking a tour of the renovated building which now serves as office space, on Friday.

Cindy Still, a retired teacher who taught at Bowie School in Bryan from 1965 to 1987, looks at a display of items saved from the old school building during a tour of the renovated school building turned office space on Friday.