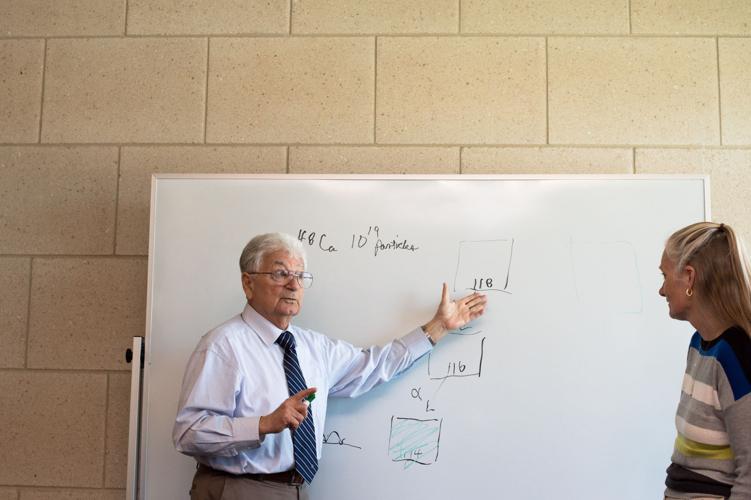 Yuri Oganessian (left) and Sherry Yennello discuss element 118 on the periodic table that may soon bear the name oganesson. 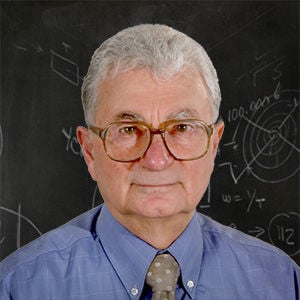 Texas A&M University Institute for Advanced Study faculty fellow Yuri Oganessian could soon be known by scientists and high school chemistry students alike as the namesake of element 118 on the periodic table.

Announced earlier this month by the International Union of Pure and Applied Chemistry, the element is proposed to be named oganesson and would be identified with the abbreviation of Og.

The 83-year-old nuclear physicist is a Russian native and an international leader in the field of researching super heavy elements.

In a statement, Oganessian -- who is currently in Russia, where he serves as the scientific leader of the Flerov Laboratory of Nuclear Reactions at the Joint Institute for Nuclear Research -- called the possibility "a great honor" as well as "a measure of my input into the science of the super heavy elements."

Sherry Yennello, Texas A&M professor of chemistry and director of the Cyclotron Institute, said it would be an "amazing recognition" of Oganessian's contributions in the field to have the element named after him.

"He's a long-term friend [of the institute] and part of the family in some sense," Yennello said. "We're very proud of him and we're proud of all the work he's done regardless of the recognition -- though we think the recognition is really appropriate. We're thrilled for him."

While he has had a longtime relationship with the university, Oganessian came to teach on the campus in 2015 as a member of the 2014-2015 class of TIAS Faculty Fellows.

During that time, Yennello said Oganessian was greatly involved in several aspects of both the Cyclotron Institute and the College of Science, with some lucky graduate students getting the chance to work on research projects with him.

"It's really a form of enrichment for our academic programs broadly, but the people who get to collaborate directly with [visiting TIAS fellows like Oganessian], I'm certain they'll remember it for the rest of their lives," said John Junkins, founding director of TIAS. "This is a wonderful recognition of the quality of individuals we're bringing here."

As for the element itself, Yennello explained it is one of the several discovered elements that has not yet be found in nature, instead being a product of artificial creation in a collider.

The naming of the element would make Oganessian only the second living scientist in history to have an element on the periodic table named after him, following American chemist Glenn Seaborg.

"In order to be recognized while still alive is so much more of a recognition of his contributions," Yennello said. "It's fitting that he get this recognition."

The element's name is expected to be confirmed in November and, should it be accepted, will be added to the periodic table in January.

The Texas A&M University Institute for Advanced Study was established in 2010 to bring world-class scholars to the university with the goal of helping to develop faculty and students in the realm of research.

This article has been updated to reflect that Ognaessian is the second living scientist in history to have an element named after him.

Bryan school board approves $4.17 million in raises as the district faces teacher needs

Watch now as protesters gather in Bryan-College Station in response to Roe v. Wade being overturned.

Title IX at 50: Looking back at its local impact for women in sports

CSISD board approves compensation plans, but $3 million will depend on voters' approval

The College Station school board approved two compensation plans, one based on the district’s current budget and a second that would be implem…

The U.S. Supreme Court’s decision to overturn the landmark Roe v. Wade case Friday left some people celebrating and others scared about what i…

Yuri Oganessian (left) and Sherry Yennello discuss element 118 on the periodic table that may soon bear the name oganesson.