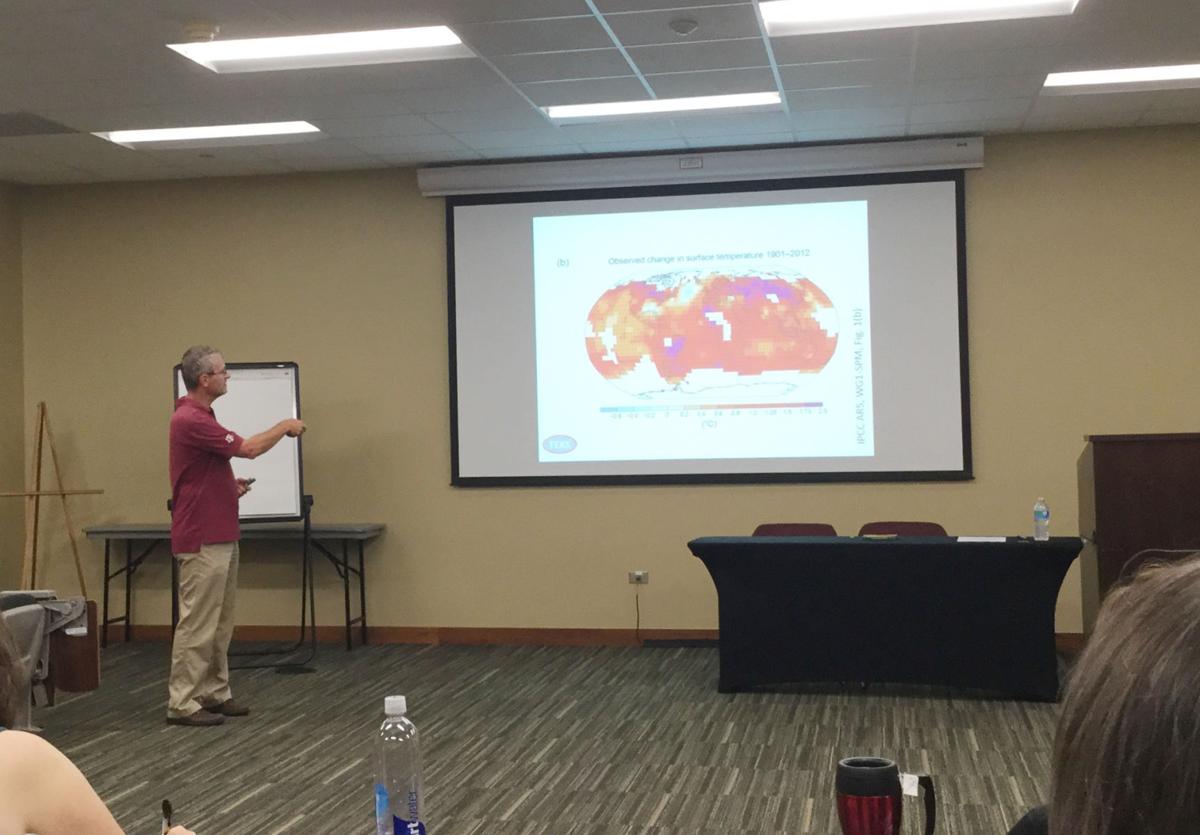 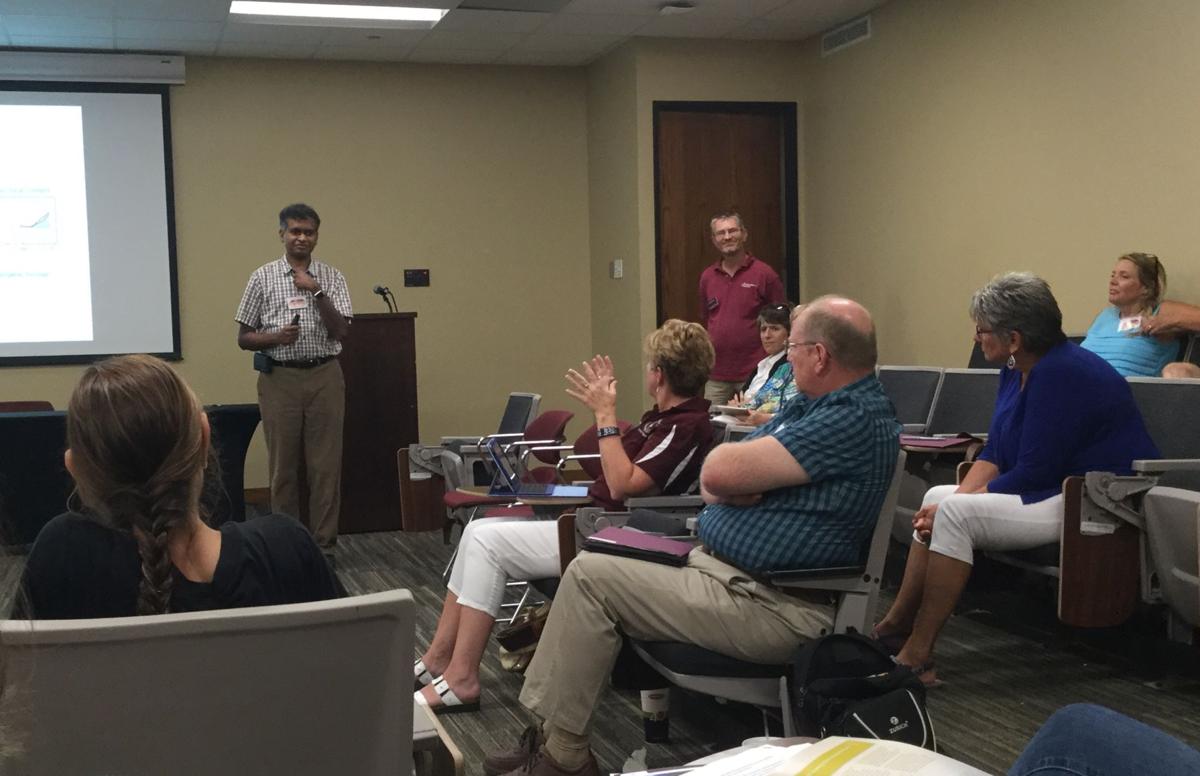 Dr. Ramalingam Saravanan, professor of atmospheric sciences at Texas A&M, addresses a member of the audience. 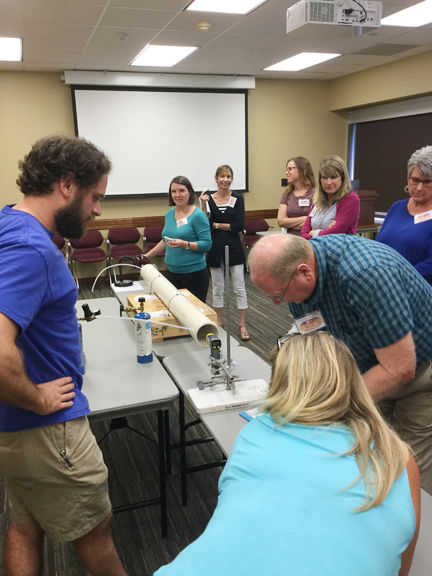 The controversy and common misconceptions surrounding climate change can cause many teachers to be reluctant or unsure how to respond when confronted by students and parents.

To help educators better understand these phenomenons and how to teach it in their classrooms, Gunnar Schade, an associate professor in the department of atmospheric sciences at Texas A&M, offered his expertise Thursday to kindergarten through 12th grade teachers from across the state during a six-hour climate change workshop in Rudder Tower on the Texas A&M campus.

The workshop, which counted toward the teachers' required professional development training hours, focused on the scientific evidence of the Earth gradually warming over the past few years because of human activity, as well as how to debunk several common myths regarding the subject.

"These [myths] go back to the mid-1980s to early 1990s when a large misinformation campaign started and has lived on since then," Schade said. "It has created many of these myths about climate science that have become everybody's knowledge, and they're still around. I call them 'zombie arguments' because they have been killed over and over and over again, but they keep reappearing in the news all the time."

Using various instruments, including thermometers, buoys, satellites and drilled ice cores, he said that over the past thousands of years there has been consistent highs and lows of global temperatures following glacial and interglacial periods.

In recent decades, Schade said the increase of human emissions from the combustion of fossil fuels -- consisting largely of carbon dioxide and water -- has intensified radiation levels, thus raising global temperatures. "As you add more greenhouse gases, you make the [atmosphere] a little more opaque than it was before, and this causes a little bit less radiation going out," he said. "Now, you have an energy imbalance."

According to data collected by NASA's Goddard Institute for Space Studies presented at the workshop, the average global temperature has steadily increased in the past four decades. The past two years have been the hottest on record, according to the institute.

Even with an abundance of scientific data, Schade said many misconceptions continue to surround the topic of climate change.

Common ideas people have include "scientists are corrupt," doubts on how researchers know the temperature of the Earth thousands of years ago without a thermometer and that the sun is the cause of global warming, he said.

Martha Champion, a fifth-grade science teacher in the Plano school district who attended the workshop, said she has heard many of these phrases come from her students and their parents but doesn't quite know how to respond.

"We don't get that much into it, but it always comes up," she said.

For teachers in her situation, Schade said he recommends a "misconception-based" method.

"You can actually use debunking as a teaching tool," he said. "You can use this teaching strategy by first finding out what your students know, realizing where's the misconception then constructing the teaching around that misconception by first teaching what the actual physics are behind it then explaining where the misconception came from."

Additionally, Schade said checking for credible sources cited in the media, as well as recognizing when charts and graphs have been distorted can prevent misinformation about climate change.

If all else fails, he said teachers can ultimately "agree to disagree."

"A lot of the parents of the current generation that [teachers] are dealing with and likely their kids will have heard of these myths, and they will repeat them based on whether they appear trustworthy to them or not," Schade said. "It has very little -- if anything -- to do with science; it has to do with world view."

A College Station man is facing his third driving while intoxicated charge after a traffic stop in Bryan late Monday night.

A 31-year-old Bryan man has been sentenced to 30 years in prison after he was convicted by a Brazos County jury on a charge of indecency with a child.

Rodriguez is charged with theft of a firearm, money laundering and possession of a controlled substance, all state jail felonies; and possession of marijuana and unlawful carrying of a weapon, both Class A misdemeanors.

A College Station woman accused of breaking into a home and assaulting someone with a baseball bat and a Bryan man who was arrested in December on accusations he attacked a man at a local bar with a bottle were among 17 people indicted.

The lack of diversity is an issue that local law enforcement officials said they have been trying to tackle for years. Some are concerned that national events including the police custody death of George Floyd in Minneapolis in May and protests calling for police reform hurt law enforcement’s ability to attract diverse applicants. Other community leaders said the relationship between the police and people of color is strong, but they welcome further improvements.

Brazos County health officials reported a COVID-19 related death and 20 new cases of the virus among county residents on Tuesday.

Dr. Ramalingam Saravanan, professor of atmospheric sciences at Texas A&M, addresses a member of the audience.