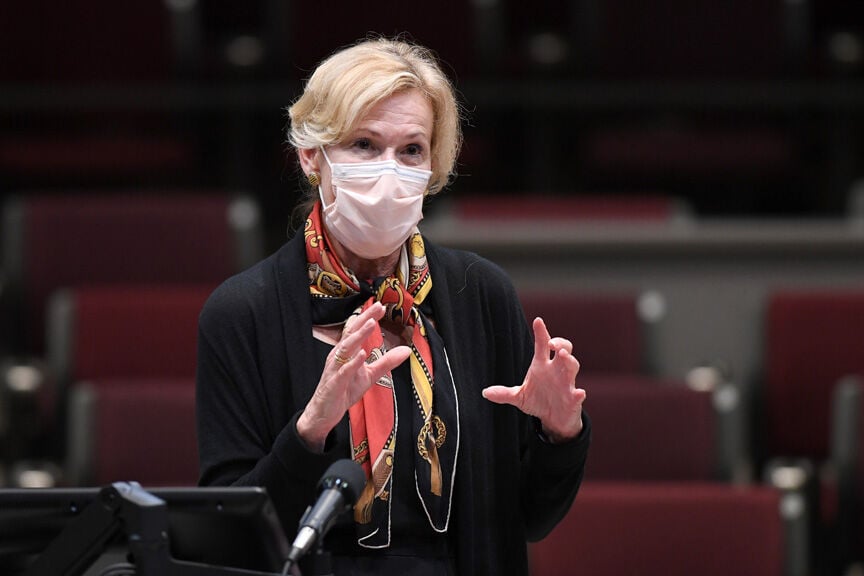 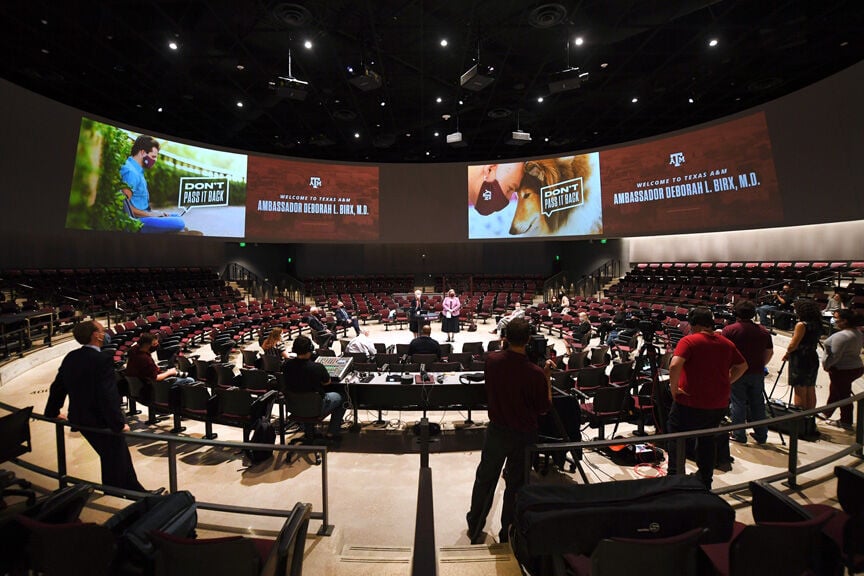 Dr. Deborah L. Birx answers questions from the media at the Texas A&M Innovative Learning Classroom during a visit to College Station on Tuesday, Sept. 22, 2020. 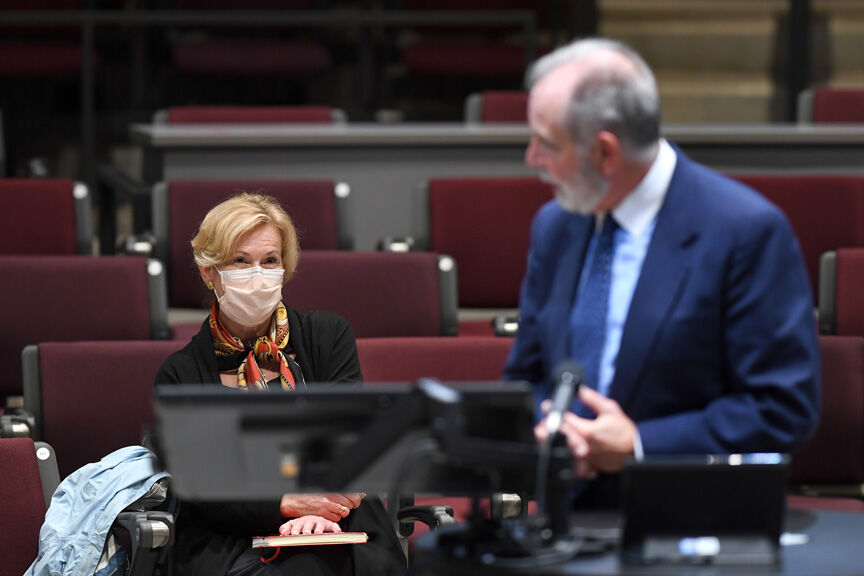 White House Coronavirus Response Coordinator Dr. Deborah Birx was in Aggieland on Tuesday to tour facilities that are slated to mass-produce a COVID-19 vaccine candidate and to meet with Texas A&M University System officials, faculty and students, as well as local media outlets.

“We’re all working towards an effective vaccine,” Birx told reporters Tuesday afternoon.  “I think the question is, ‘How many of these vaccines will work?’ And that determines how many doses we have,” Birx said. “We have, on paper, enough vaccine to immunize everyone. The question is, will all six candidates work?”

Birx has visited 15 to 20 college campuses recently, including a stop at Baylor University on Monday, and said Tuesday that regarding COVID-19, Texas A&M has the lowest positivity rate among colleges she’s visited. She noted she will visit Auburn and Clemson in the coming days.

Birx said she was moved by what she described as the students, staff and broader Bryan-College Station community working together to keep

“In light that we’re facing 200,000 American lives that have been lost — [I was really deeply moved to]

really hear the students lift us all up in the belief that we can pull together as one community, independent of our political backgrounds, to work together to respect others and ensure the virus is not passed to one another,” Birx said.

She noted that the trends at universities have been for cases to spike in the first weeks of school and then decline by weeks four or five of the fall semester.

“A significant number of students that had the most risky behavior were infected early, and other students that were highly compliant, we hope, will not become infected,” Birx said.

At the Tuesday afternoon press availability, many of the questions Birx fielded were related to vaccine testing, rollout and production. Birx suggested that once vaccines are available, patterns of distributions may suggest that most college students, except for the most vulnerable, may be later in getting vaccine doses.

“Once we have a vaccine that we know protects the vulnerable and the health care workers, I do think it’s important for it to have access in these communities that have vulnerable individuals,” Birx said. College students, on the other hand, because of their less risk for serious illness, in general, unless they’re in that vulnerable category — may be on that tail end of immunizations.”

Birx said it is critical to prove in trials that vaccine candidates are safe for a variety of vulnerable populations, including people of various ages with comorbidities, or more than one illness or condition. She said that more than 90% of those who have died from the virus had comorbidities.

“All of these trials have a broad age range to really get data about safety,” Birx said. “The vaccine has to match the need ... and we obviously want to vaccinate those individuals as fast as we can to protect them from this virus, so we need to have a vaccine that is efficacious and safe for that group. That’s really what will determine when they will be immunized.”

Birx said that in some rolling trials, vaccine candidates have gotten second shots, meaning those doing the administering can start to determine efficacy of the candidate. She said, in response to a question about expected timelines for vaccine distribution, that various experts and leaders are “hedging” because it remains an open question how many vaccines will prove effective in ongoing trials.

Texas A&M President Michael K. Young said after the press conference that it was “comforting” to have Birx affirm what Texas A&M has been doing with regard to COVID-19 response and prevention.

“I think she really has been as extensively informed about this as any person on the planet right now,” Young said. “We are always looking to get better, and I think it was helpful to spend time with someone who has that level of deep understanding and let her see what we’re doing and give us some evaluation of it. It was reinforced, I think, in a very happy way the things we are doing. Our rates are low, but you’re just never sure if you’re doing the right thing, and to get that kind of confirmation was comforting.”

The county now has 6,178 total cases of COVID-19. Of those, health officials said, 672 were considered active, a decrease of eight from Tuesday’s total.

The county now has 6,292 total cases of COVID-19. Of those, health officials said, 675 were considered active, a decrease of five from Thursday’s total.

As the Texas A&M football team prepares to host Vanderbilt at 6:30 p.m. tonight, Bryan-College Station businesses and local officials alike have been anticipating a surge in patronage this weekend.

Watch now as Dr. Deborah L. Birx visits Texas A&M and Fujifilm and provides an update on her work with The White House Coronavirus Task Fo…

The U.S. government announced Monday afternoon that a potential COVID-19 vaccine will be manufactured in Brazos County.

Dr. Deborah L. Birx answers questions from the media at the Texas A&M Innovative Learning Classroom during a visit to College Station on Tuesday, Sept. 22, 2020.